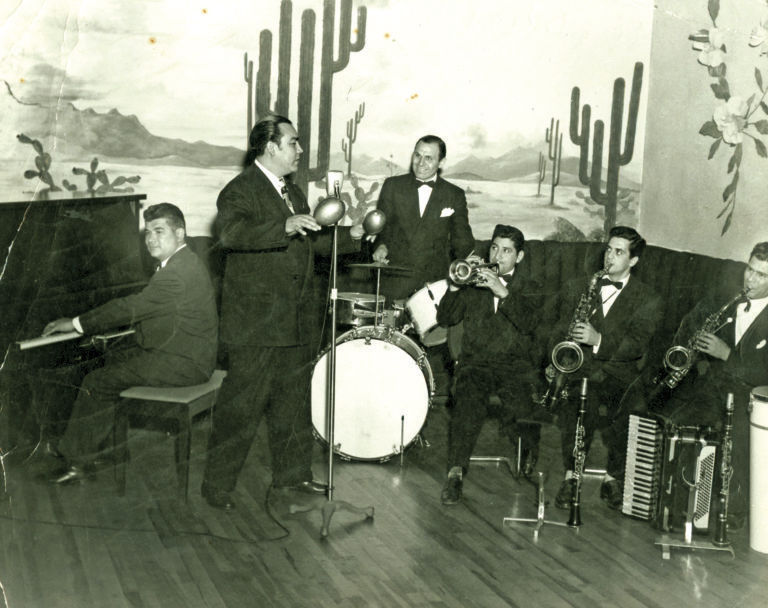 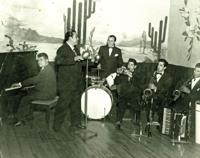 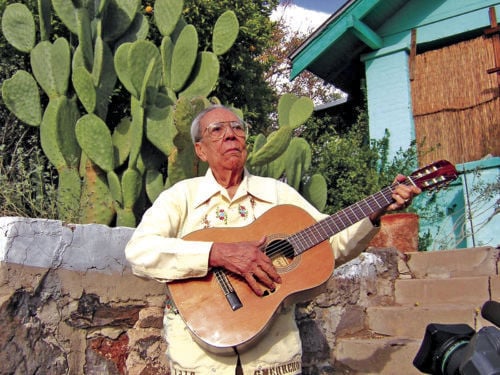 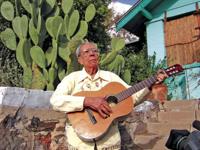 Lalo Guerrero plays his guitar outside of a building in Barrio Viejo in Tucson at the age of 86. 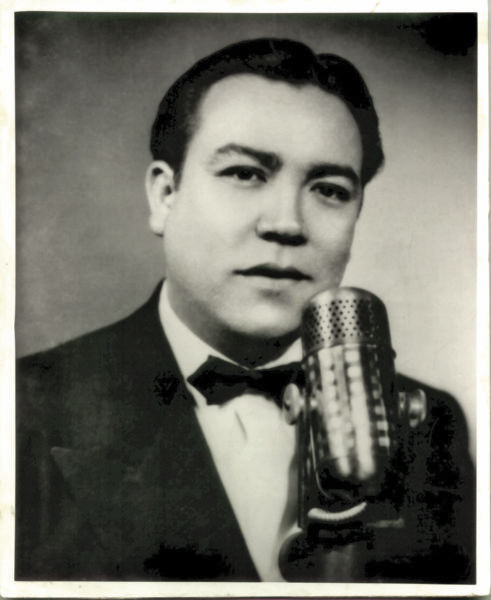 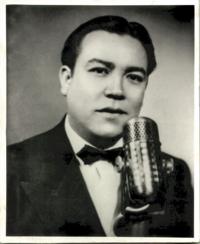 Lalo Guerrero poses for a promo photo in the 1950s. (Photo Courtesy of Mark Guerrero)

Lalo Guerrero plays his guitar outside of a building in Barrio Viejo in Tucson at the age of 86.

Lalo Guerrero poses for a promo photo in the 1950s. (Photo Courtesy of Mark Guerrero)

TUCSON — While crew members and volunteers haul speakers, cords and amplifiers off the makeshift stage at Tucson Meet Yourself, guitarist George Landa mingles with the handful of fans waiting in line to buy his band’s CD.

Guerrero is recognized as a National Folk Treasure by the Smithsonian Institution. He pioneered a number of musical techniques and styles, becoming the first musician to incorporate Chicano slang into his lyrics. He learned this slang, or caló, growing up in Tucson, according to his son Mark Guerrero. He also frequently incorporated multiple tempos or musical genres into one song.

This year would have marked Guerrero’s 100th birthday. Born in Barrio Viejo to a large Mexican family, his mother taught him to play the guitar at a young age and as a teenager, Guerrero played with the Tucson quartet Los Carlistas. The group’s successes included a part in the 1937 Gene Autry film “Boots and Saddles” and representing Tucson at the 1939 New York World’s Fair, according to Mark Guerrero. Shortly after moving to Southern California, Lalo Guerrero helped shape the music scene that came to be known as Chicano rock.

“No one else’s music had the originality and diversity of his music,” Mark Guerrero said.

Mark, who is an accomplished musician himself, began recording and touring with his father at age 14. After he graduated with a degree in Chicano studies from California State University, he “started incorporating Latin rhythms and Chicano themes into (his) original music.”

Mark says he appreciates the fact that numerous rock bands, trios and mariachis continue to play his father’s music.

“I’m very pleased with musical tributes to my dad,” Mark says. “He’s considered the ‘Father of Chicano Music’ because he truly is, and there is no one else who comes close to claiming the title.”

During his career, Lalo recorded more than 700 songs in nearly every Latin genre including salsa, banda and cumbia. His songwriting and recording were prodigious: He penned and performed parodies, political tunes and even children’s songs, according to Mark.

“Here is a Tucson-born Chicano who writes a song that is true Mexican to the core,” says Ernesto “Neto” Portillo Jr., a longtime newspaper reporter at the Arizona Daily Star in Tucson. “That song is enshrined in Mexican culture and is accepted in Mexico as one of its own.”

Before Lalo, Mexican music was rarely played outside of Hispanic communities like Tucson, El Paso and Los Angeles. As a young musician based in Southern California, Lalo introduced other parts of the country to mariachi music, according to Portillo.

“He began traveling with mariachi groups to faraway places like Kansas and the greater Southwest,” Portillo jokes. “He took Mexican music to little towns and small cities.”

Lalo also wrote a number of songs related to the zoot suit era, a period of heightened nationalism and anti-foreign attitude during the 1940s and ’50s. The Pachucos, Mexican-Americans who dressed in zoot suits and used Chicano slang, were especially singled out.

The so-called Zoot Suit Riots were confrontations in 1943 in which young minorities, especially Mexican-Americans, became the target of attacks because they “dressed different, listened to different music and looked foreign,” Portillo says.

In addition, Lalo supported the United Farmworkers in the 1960s. He composed several songs about social injustice and even wrote a corrido for Cesar Chavez. His parody “No Chicanos on TV” addressed the lack of television and movie roles for Hispanics in the U.S.

“He was at the forefront, musically and artistically, of Chicano civil rights music,” Portillo said.

Portillo believes Lalo made it possible for Mexican-American musicians to be accepted on a wider scale.

“Musically speaking, they took his persona and his trailblazing route,” Portillo said.

“We didn’t create this; it was given to us,” Landa says. “We have to pay respect and honor the man who paved the way for us.”

Los Nawdy Dawgs have followed Lalo’s path. In 2013, the group created an album entitled “Lalo’s Town” featuring a compilation of Lalo’s songs as well as the band’s original tunes.

The album’s inspiration stemmed from an encounter with Mark Guerrero, whom Los Nawdy Dawgs met after attending a screening of a documentary “Lalo Guerrero: The Original Chicano” at the Fox Theatre in Tucson. The band was invited to the event by The Chicano Radio Network.

“One time, I’m lying in my room, minding my own business and I get a vision of Lalo Guerrero saying ‘somebody’s gotta carry the Chicano music and bring it back,’ ” Landa says.

Los Nawdy Dawgs subsequently began studying Lalo’s work and “putting (their) own spin on the material,” according to Landa.

The band took a step back from its Latin Blues roots to extensively immerse itself in Chicano music culture.

Although Los Nawdy Dawgs bassist John Liñán was previously familiar with Lalo’s music, he was surprised to learn about the wide variety of genres his work encompassed.

“If you grew up on the south side of Tucson, Lalo was part of your soundtrack,” Liñán said. “But you never get to appreciate it fully until you actually start playing the music.”

Lalo’s endearing personality and stage presence appealed to many.

“He had charm, humor and insight on music and people,” says Bob “Pepe” Galvez, a former local music store owner.

While running two separate record stores in the 1980s and ’90s, Galvez would usually keep for himself much of Lalo’s music that came in.

“I probably have one of the biggest collections and I’m very proud of it,” Galvez says of his Lalo library.

“There’s No Tortillas” and “Pancho Claus” are among the titles of his parodies.

“He appealed to a variety of people, especially Anglos,” Galvez says. “He just cracked people up.”

On a more serious note, Lalo grew up in an era when identity formation was next to impossible for a Mexican-American.

Mexican-Americans were neither fully embraced by Mexicans nor Anglo-Americans, according to Julie Godoy, who majored in Latin American Studies and History at Northern Arizona University and attended the Los Nawdy Dawgs concert. To Mexicans, Chicanos had lost their culture and became privileged Americans, or “pochos.” To Anglos, Chicanos were viewed only as Mexicans.

Lalo Guerrero was pivotal in breaking away from this mindset and popularizing Chicano culture.

“Chicano music is special because of the bond it has with our cultural heritage,” Godoy said. “The music relays lyrics and feelings that build pride.”

Although she now lives in Tucson, Godoy was born and raised in Los Angeles. The city served as the foundation upon which the Chicano community thrived and the location to which Lalo relocated to shape the Chicano rock culture.

“I grew up in L.A. where the vatos would cruise the streets of our neighborhoods playing music that would end up making a great impact on my life,” Godoy said.

“Chicano music reminds me of my culture, my people and my history.”

Godoy believes in the importance of introducing young people to the music of Lalo Guerrero.

“Lalo Guerrero’s music is as relevant today as it was during the height of his musical career,” Godoy said. “The younger generation of today can learn a lot from Lalo’s music.”