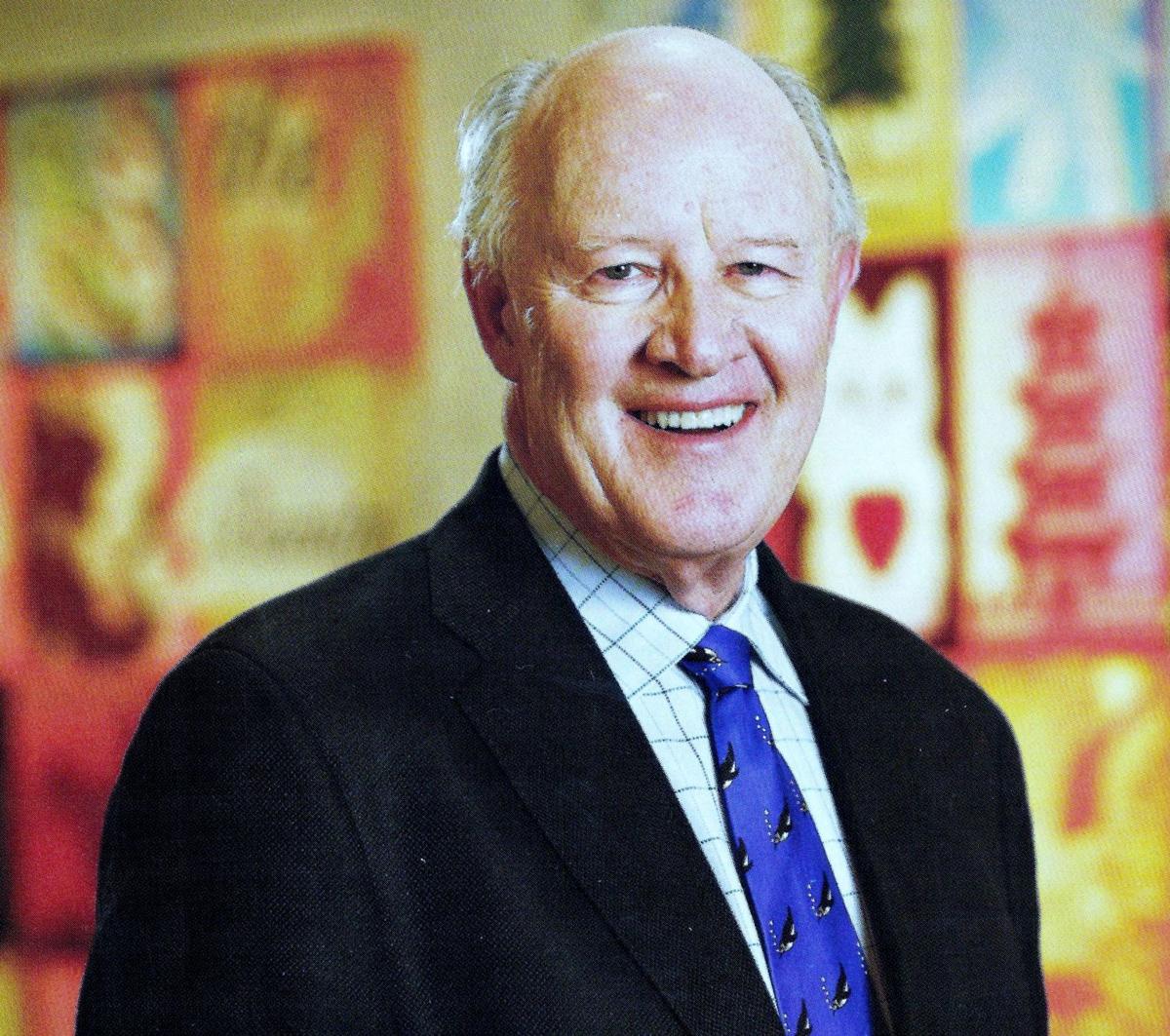 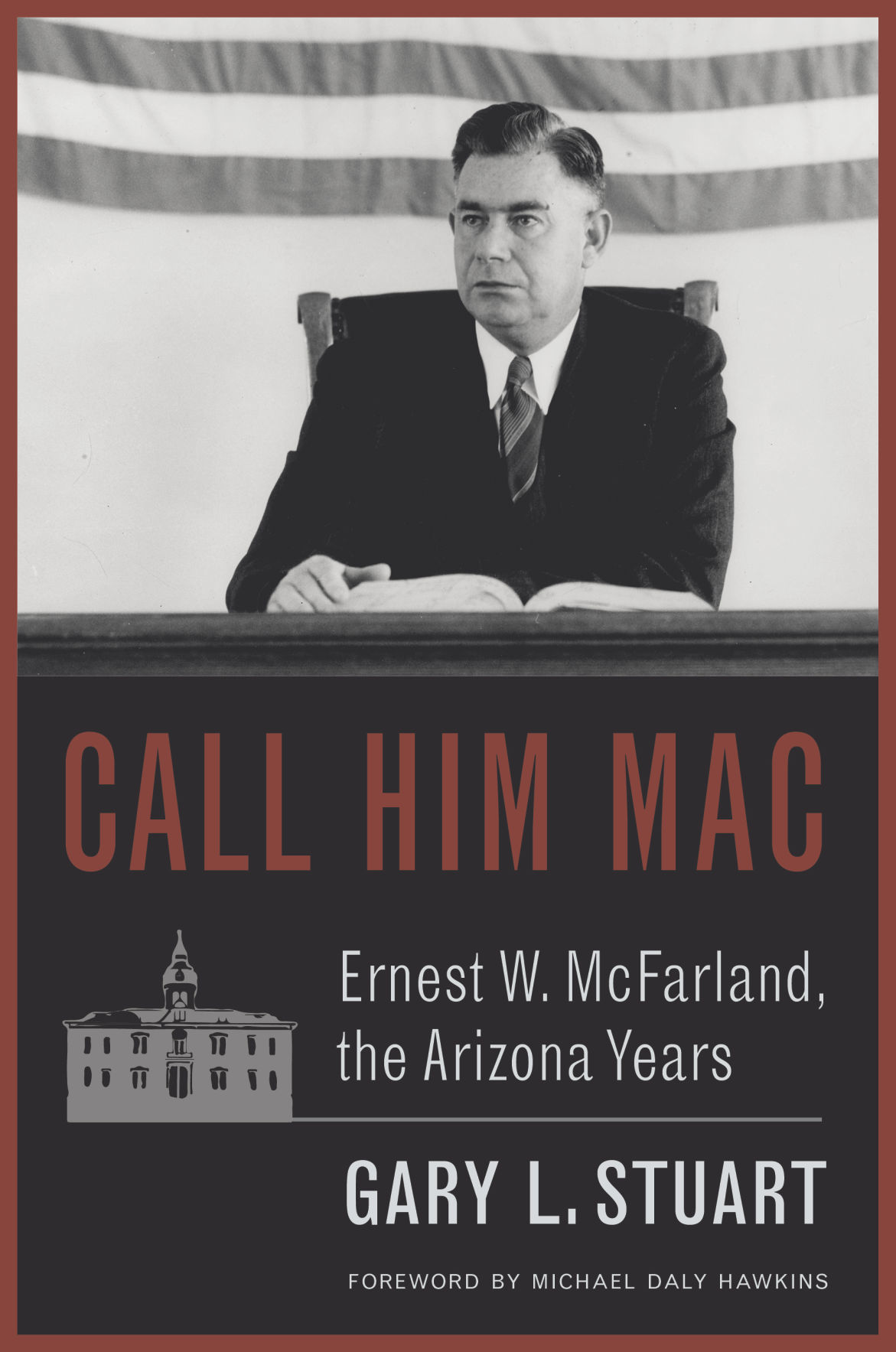 Ernest W. McFarland’s experiences in Florence helped him become the man who people all over the country knew as “Mac,” author Gary L. Stuart says. Stuart wrote “Call Him Mac: Ernest W. McFarland, the Arizona Years,” which is due for release this week. 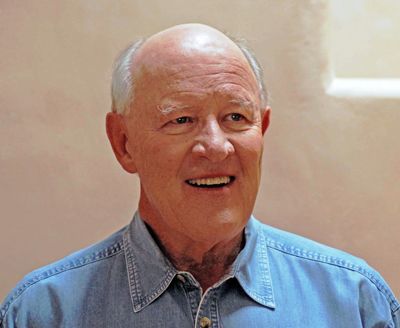 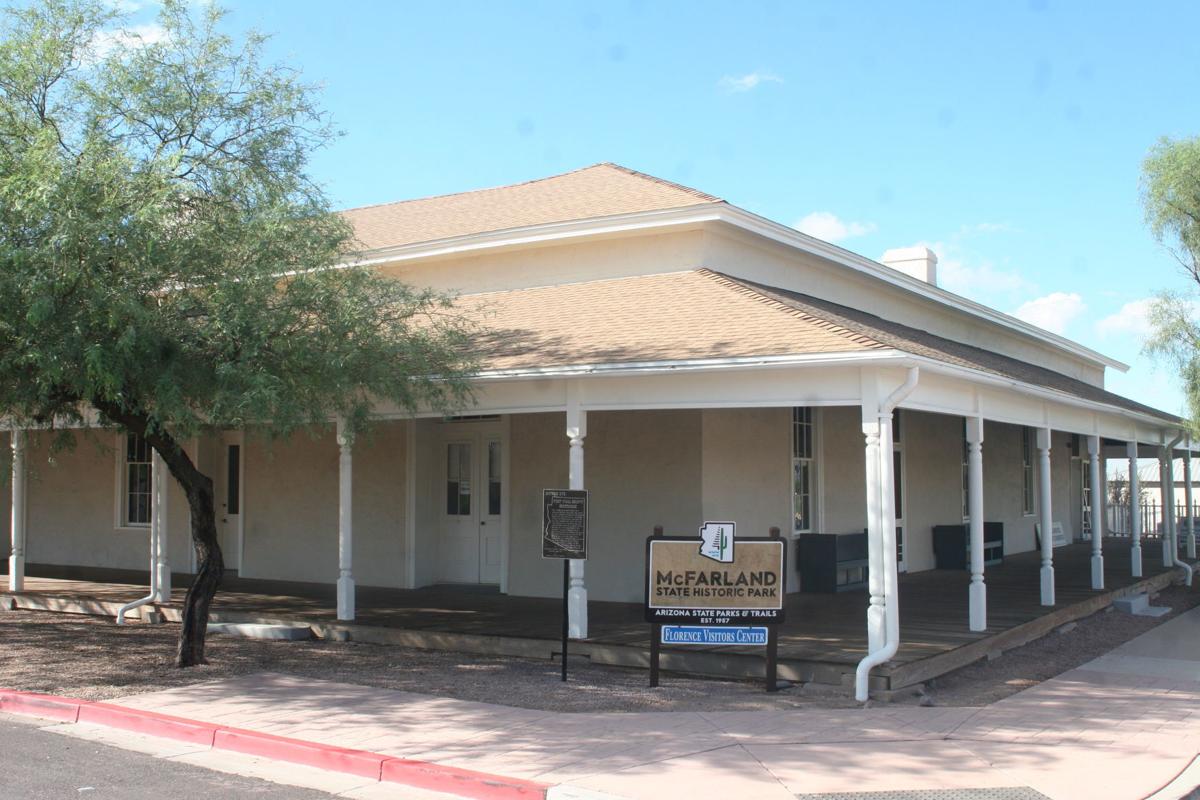 Ernest McFarland left a legacy in Florence with the buildings he saved, such as the first county courthouse, known today as McFarland State Historic Park, and the John Clum House, below. 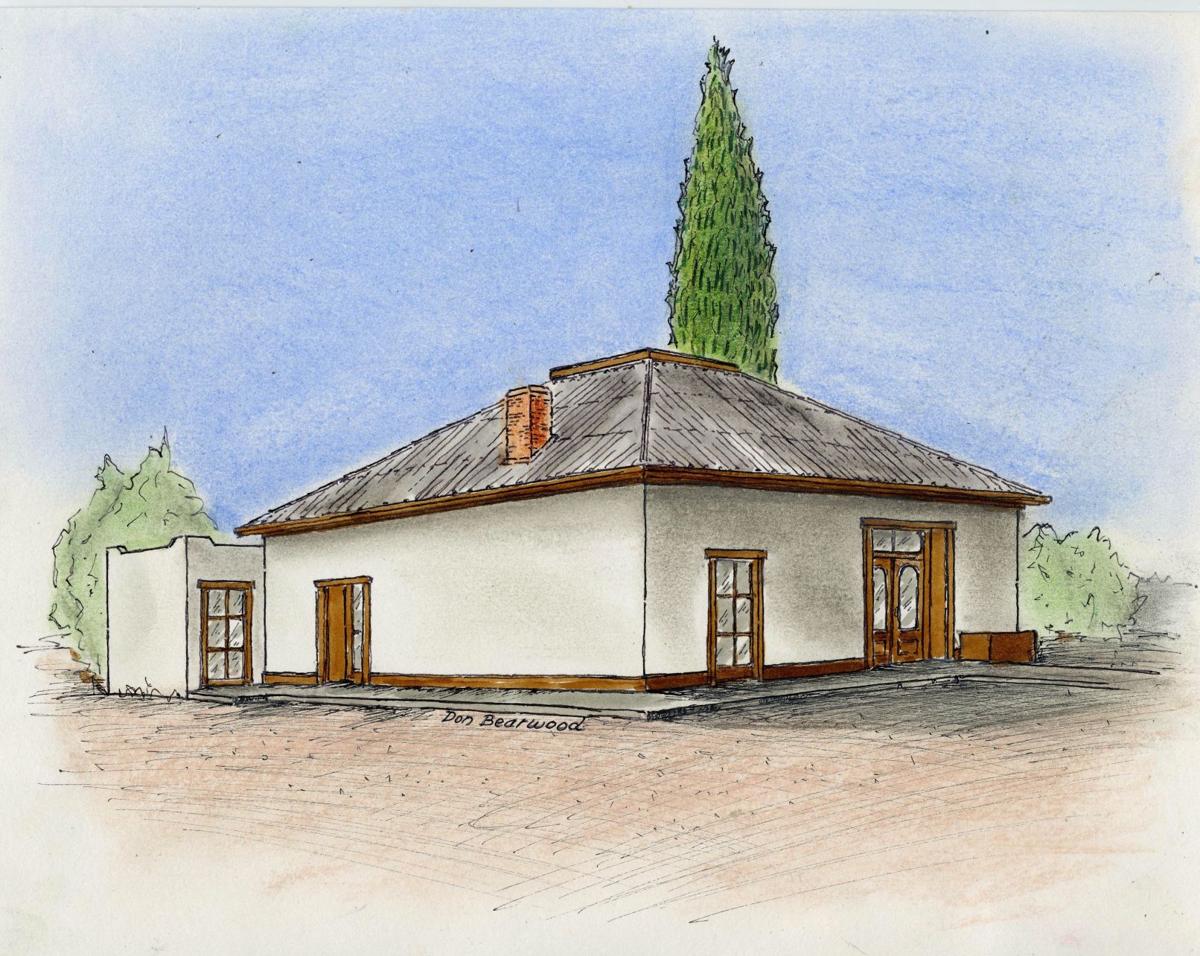 Ernest McFarland left a legacy in Florence with the buildings he saved, such as the John Clum House. 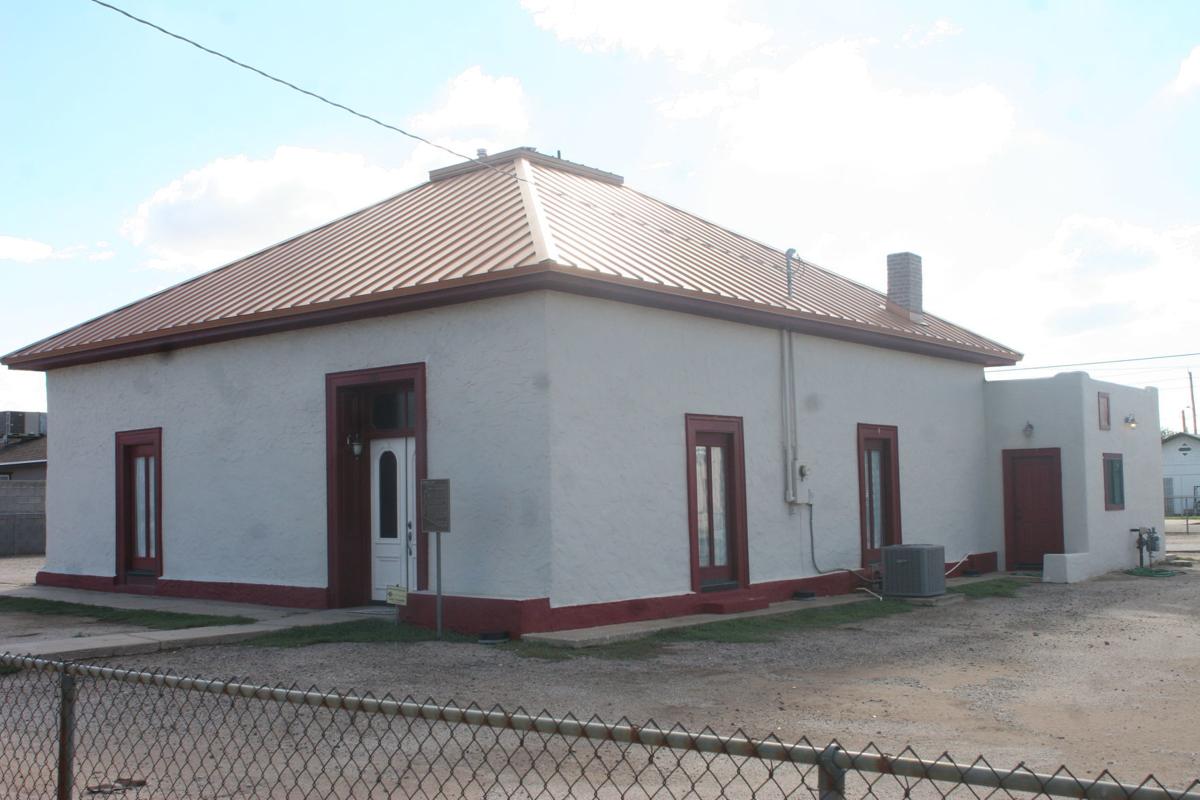 Ernest McFarland left a legacy in Florence with the historic buildings he saved, such as the John Clum House.

Ernest W. McFarland’s experiences in Florence helped him become the man who people all over the country knew as “Mac,” author Gary L. Stuart says. Stuart wrote “Call Him Mac: Ernest W. McFarland, the Arizona Years,” which is due for release this week.

Ernest McFarland left a legacy in Florence with the buildings he saved, such as the first county courthouse, known today as McFarland State Historic Park, and the John Clum House, below.

Ernest McFarland left a legacy in Florence with the buildings he saved, such as the John Clum House.

Ernest McFarland left a legacy in Florence with the historic buildings he saved, such as the John Clum House.

FLORENCE -- Ernest W. McFarland — U.S. senator, governor and state Supreme Court chief justice — was a popular Arizona politician in the latter half of the 20th century. A new book makes a case that his years in Florence as a young lawyer, prosecutor and judge were essential preparation for his achievements later in life.

When McFarland, at age 30, moved to Florence in late 1924 as the newly elected county attorney, it was the beginning of a relationship with the Pinal County seat that would last for 60 years, the rest of McFarland’s life. Florence was a town of only about 1,500 people at the time. Earlier, he homesteaded near Casa Grande and practiced law there for a short time.

“Did he grow to love Florence? Absolutely,” Stuart said in a phone interview. “Because it was the right place for him to build these personal strengths, to show people what he could do, and to think about the major problems facing his little town, his county, his state and in a greater sense, the western part of the United States.”

It was this unique period of time “that I think explains how Mac became Mac,” Stuart added.

At least three prior books detail McFarland’s achievements — his autobiography, the autobiography of his longtime law partner Thomas Fulbright and a 2004 biography by James McMillan Jr. But perhaps only 50 pages among all three books attempt to explain who McFarland was before he sprang to national prominence, Stuart said.

“And that’s the story I was digging for, for the better part of a year, that it took to research this book.” Stuart noted there are extensive archives, thousands of documents, reports and photos related to McFarland’s career, but “some of the most important parts about his life are absolutely silent. My focus is to write Mac’s story in his 20s and his 30s.

“There’s a whole chapter in the book about Florence. In my opinion, much of what Mac accomplished in his life was accomplished because he lived in Florence. I think that lifestyle, and the people who were there then, in the ’20s and the ’30s, helped Mac shape his vision of what needed to be done, not just in Florence but in southern Arizona. And not just in southern Arizona, but Arizona on a larger scale. Ultimately, that became the United States, on a larger scale.”

McFarland was determined, industrious and methodical in pursuit of his goals, Stuart said. “It was no accident, none of this is coincidental. He knew exactly who he was when he was 23. And he knew exactly where he wanted to go in his 30s. Mac’s focus was always on the future. It was rarely on the past.”

He was an Oklahoma native, and other family members eventually came to Arizona to be near him. “He found the desert so enticing, so thrilling, so well-suited to the kind of ambition that he clearly had,” Stuart said.

An element of luck

“Was there a large element of luck involved here? As it turns out, I think there was a piece of luck, that no one could have predicted,” Stuart said.

In 1940, McFarland ran for Senate against Henry F. Ashurst, the incumbent who didn’t come home to campaign. Ashurst couldn’t imagine a small-town farmer like McFarland could beat him.

But in fact, McFarland beat Ashurst in the Democratic primary, went on to win the general election and became a U.S. senator in January 1941 at age 46.

He became Senate majority leader, and Time magazine reported in 1951 that he had “presidential timbre.” He was strongly encouraged to be Harry Truman’s running mate in 1952, but Truman ultimately decided not to run for re-election as president. Stuart said McFarland had a phone on his desk in the Senate that was directly connected to Truman’s phone in the White House.

McFarland is often called “the father of the GI Bill.” As Senate majority leader, he chose a young Texan, Lyndon Baines Johnson, to be his whip. His long-term plan, Stuart said, was to stay in Washington, but that was all about to change.

“Mac’s life dramatically changed in 1952 when he lost to Barry Goldwater,” Stuart said. “His plan had been to stay in the Senate and continue to be the majority leader as long as he was electable.” But McFarland continued to be successful and won more elections — for two terms as Arizona governor and then two terms on the Arizona Supreme Court.

Through it all, he never forgot Florence.

“He would always drop in on people,” his grandson John Lewis recalled in a phone interview. “It wasn’t political because he wasn’t running for office in those days. That was all behind him. He was a judge and everything. He just really kept his friendships and would visit people, see how they were doing, and just really kept himself grounded. He was very loyal to a lot of people.”

As a young man, McFarland tragically lost his first wife and their children to illnesses, “and he never forgot them, either,” Lewis said. “He would take me out to the gravesite of his first family when I was a kid, and I’d help him tidy it up. I still do that to this day.”

McFarland has an enduring legacy in Florence, not only in the memories of local people, but also with the buildings he saved. He bought the first Pinal County Courthouse and gave it to the Arizona State Parks system he created when he was governor. He also restored the historic John Clum House to serve as his Florence residence.

If McFarland were around today, he might be helping to save the rundown little adobe at Main and 11th streets, known historically as the “Cuen House,” but decades ago it was the McFarland & Fulbright law office.

McFarland was at the center of two of the most notorious capital cases in Arizona history — one as a prosecutor and the other as the defense attorney. He was the prosecutor who opposed Eva Dugan’s clemency, and “as a consequence, she was executed,” Stuart said. “Winnie Ruth Judd was the exact reverse. She was scheduled for the death penalty and he defended her. His arguments and his lawyering resulted in a finding that she was insane and therefore could not be executed.”

Stuart, 79, knew Fulbright. “I didn’t know him well, but I did know him as a lawyer,” Stuart said. “I knew Mac only in the sense that he read the oath of office when I passed the bar in Arizona in 1967, and that year he was the vice chief justice. So his name is on my bar license. And he shook my hand when I took the oath — along with 50 or 60 other lawyers.”

Stuart is the author of 11 books, including “The Gallup 14,” a novel based on a notorious 1930s court case in New Mexico; “Innocent Until Interrogated: The True Story of the Buddhist Temple Massacre and the Tucson Four”; “Miranda: The Story of America’s Right to Remain Silent”; and “Anatomy of a Confession: The Debra Milke Case.”

Stuart said he wrote his latest book at the request of McFarland’s grandchildren. He said he wrote it for “readers who enjoy stories about how someone accomplished something.”

“I tried to write his story, not his history. My book is not really a biography. It’s a story about how he managed to accomplish what he accomplished, to the extent that’s possible decades after the fact. To explain why he wanted to do that. To explain why some of the most important issues in his life are not in his book.

“Some of the biggest challenges of his life are not in the political biography and certainly not in his autobiography. Why is that? It’s not there for a simple reason: Mac didn’t want it there. He lived his private life privately.”

Lewis said Stuart’s book, in contrast to previous books about his grandfather, is “more for the layperson, talking about what it was really like to be alive and walk in Mac’s shoes. Gary explains everything — what it was like to be there, how society was working in those days, how they did things in those days, which was quite different than today.

“It will give the reader a really good feel for what Mac’s life was about. There’s a lot of things that Gary Stuart uncovered about my grandfather.”

Stuart said, “Without the people, the culture and the way of life in Florence in the ’20s and ’30s, Mac would not have become who he became. He needed those people and that environment — the way they thought, the way they conducted themselves — because it was a very nonpartisan, open, open-minded environment. He was part of it and used what he learned there about human nature. And some of it from his partner Tommy Fulbright. There’s a lot of Florence in this book.

“Florence has every right in the world to be proud of what it did in helping Mac become Mac.”

Next year will be the 75th anniversary of the GI Bill, and McFarland’s family will likely want to observe that in some way. The family also wants to make sure McFarland’s story and accomplishments continue to be known.

“We’re trying to promote my grandfather’s legacy,” Lewis said. “He’s really not in the textbooks anymore, and he had such a crucial part in Arizona. We’re going to try to change that, so we’ve got a lot of work to do.”

This event is free but space is limited. Guests are asked to RSVP by Saturday by calling 602-466-3333 or registering online at: