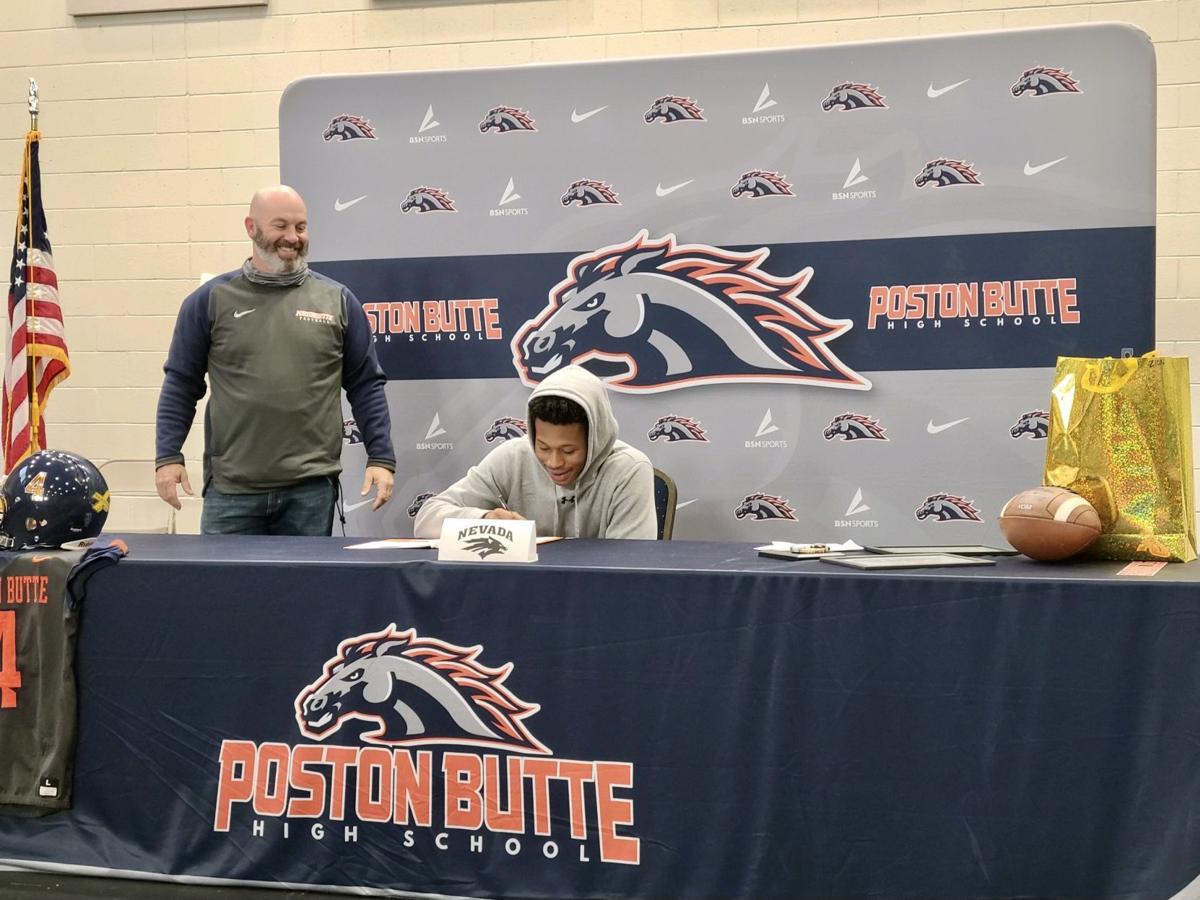 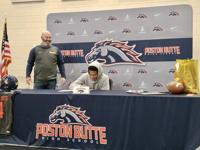 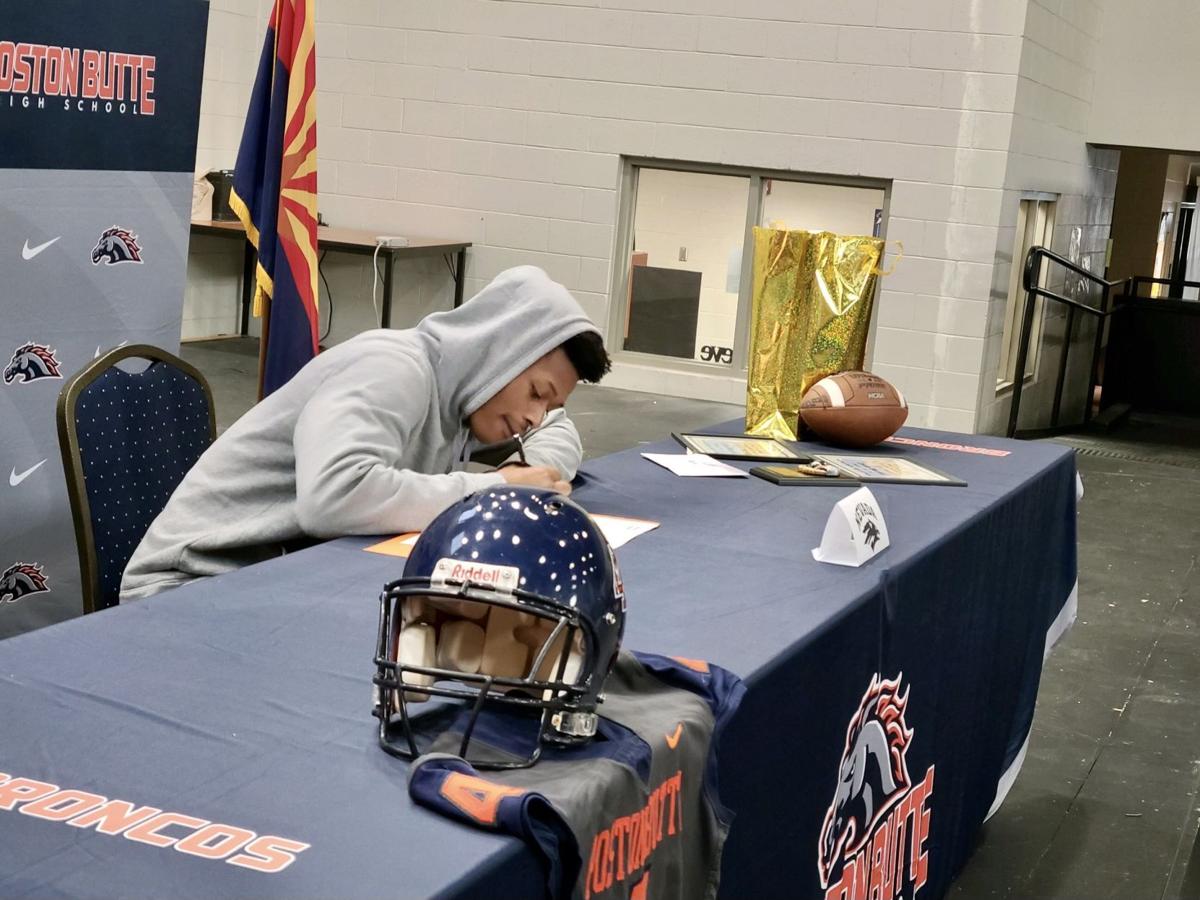 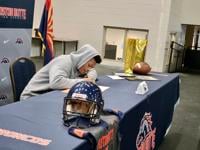 Poston Butte running back and defensive back Zion Burns signs his national letter of intent to play college football for the Nevada Wolfpack on Wednesday in San Tan Valley. 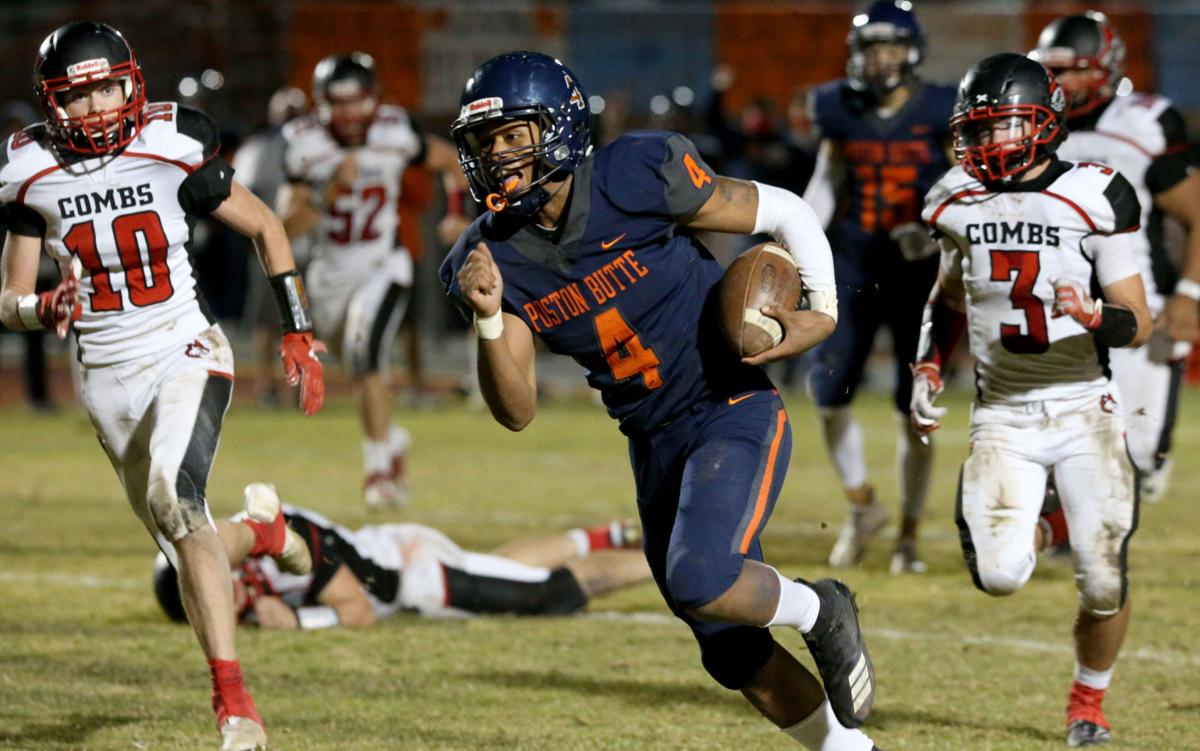 Poston Butte running back and defensive back Zion Burns signs his national letter of intent to play college football for the Nevada Wolfpack on Wednesday in San Tan Valley.

SAN TAN VALLEY — Following the conclusion of an impressive 2020 season, Poston Butte football star Zion Burns is officially ready for the next level.

As the early signing period began Wednesday, talented seniors across the nation signed on the dotted line to determine where they will fulfill their college dreams. For Burns, that journey will take him to the University of Nevada, Reno.

“My parents and I thought it was the best place for me,” Burns said.

Burns starred on both sides of the ball for the Broncos, and was an absolute force running the football. He finished his senior season with 109 carries for 1,248 yards and 15 touchdowns, averaging 156 rushing yards per game.

“Zion will definitely be able to compete at the next level, and I’m ready for his opportunity,” Poston Butte coach Dain Thompson said. “Zion is a complete football player, so I will be waiting to see how his new coaching staff use his abilities: offense, defense and special teams. They will have some choices to make, that’s for sure.”

While Burns was more often utilized as on offensive player for Poston Butte, he did spend some time between safety and cornerback. Nevada Football announced his signing with the program and listed the 6-foot San Tan Valley native as a cornerback.

“I will be playing cornerback at Nevada,” Burns said. “I’ll be working on improving my speed, footwork and strength.”

He was a key piece of a 20-man senior class that won the school’s first regional title in program history. Their postseason run ended in disappointing fashion, as they were upset at home by Phoenix St. Mary’s in the first round, but it did little to diminish progress and optimism for the future.

His coach will never forget the highlight of the St. Mary’s loss, a 69-yard run where Burns cut up field and made numerous Knights defenders miss. It was the final touchdown of his high school career.

“That last touchdown Zion made of (his) high school career wrapped it up for me,” Thompson said. “The run he made in the first half was one of the best runs I have ever seen. Breaking tackles, stopping on a dime, changing direction. It was something.”

Burns’ connection to Nevada had been in place prior to his senior season with his verbal commitment in May. His path to a Division I football program is becoming more common in Arizona and the booming population in the San Tan Valley.

While most top athletes would flock to private schools with bigger budgets and more eyeballs, Burns stayed and forged his own path at Poston Butte.

“The Poston Butte community means a lot to me,” Burns said. “I want to set the path for all the younger athletes that plan on attending Poston Butte.”

Thompson will miss his star running back on and off the field. The pair have a close relationship and will keep in contact as Burns prepares his journey northwest to Reno.

“Zion gives validation to the idea of what high school football is supposed to be,” Thompson said. “Zion is a D-I kid who chose to play football in high school with the same guys that he played with in middle school. I am excited for his future, and we all are looking forward to see him play at Nevada.”