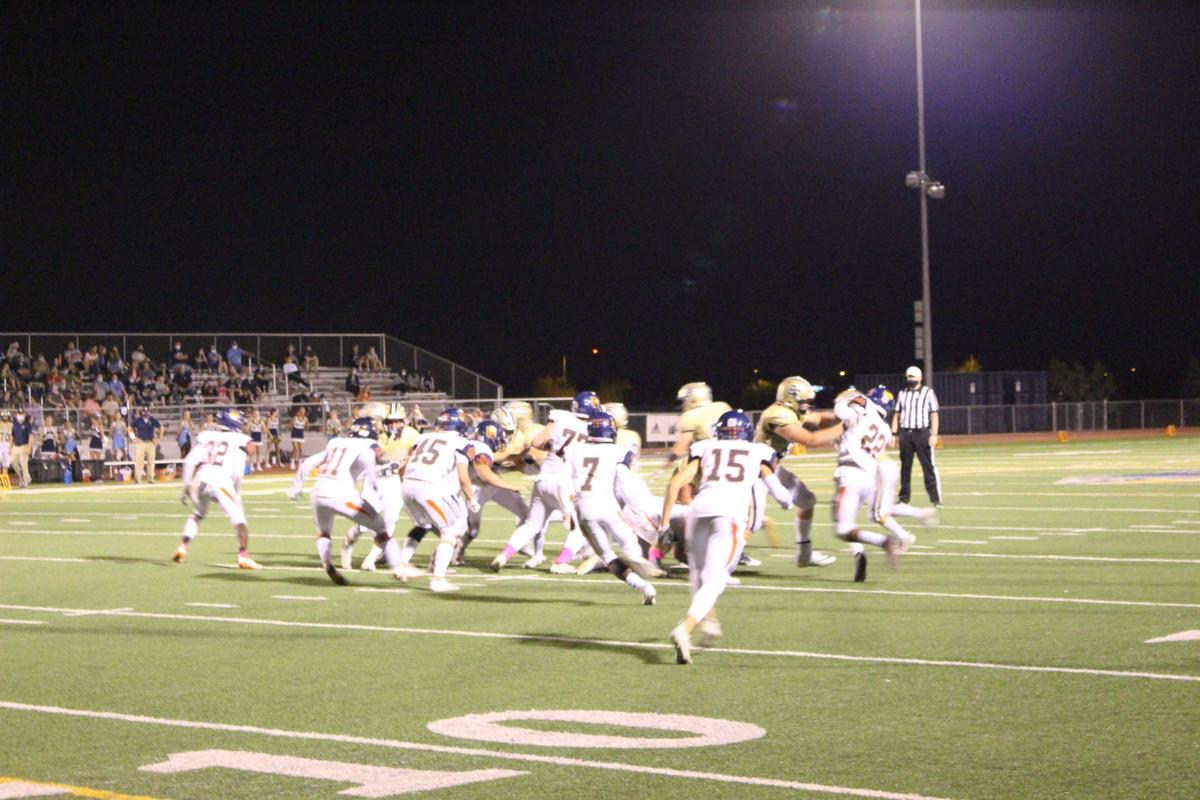 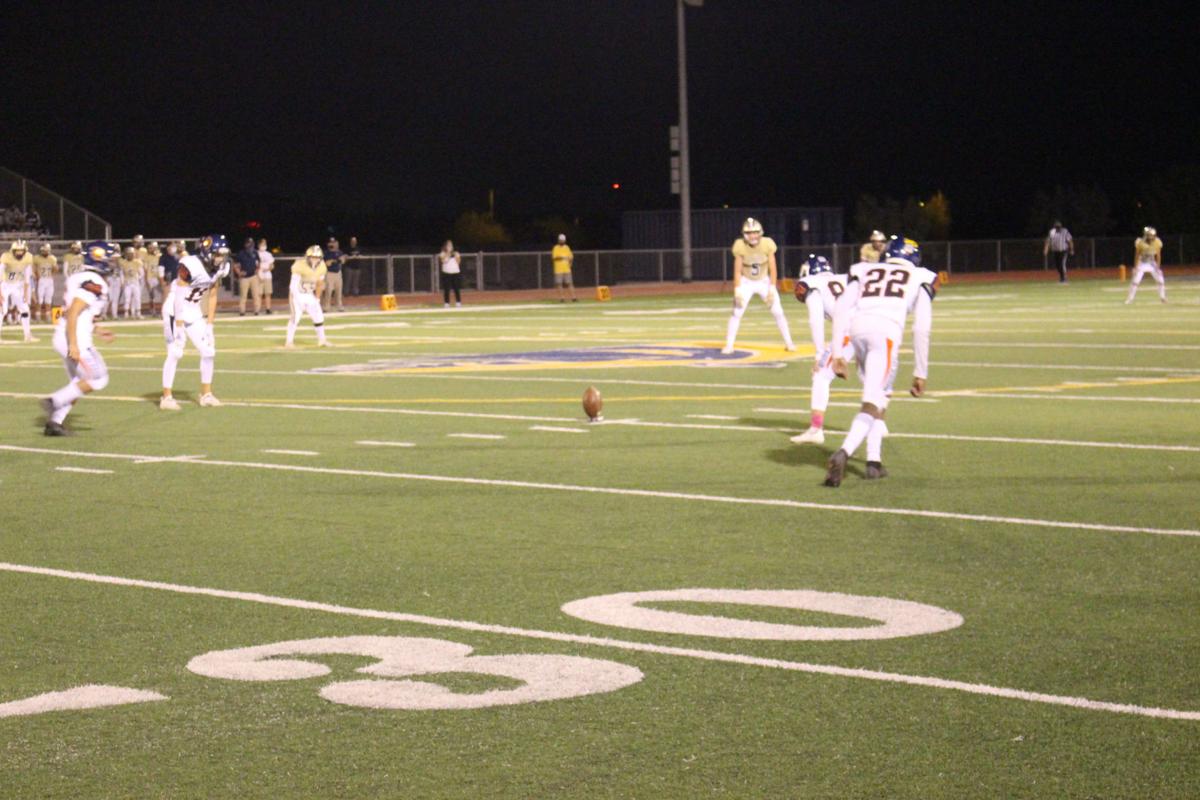 Poston Butte’s kicker Juan Castenada prepares for an onside kick during the second quarter of Friday's game against Benjamin Franklin in Queen Creek. 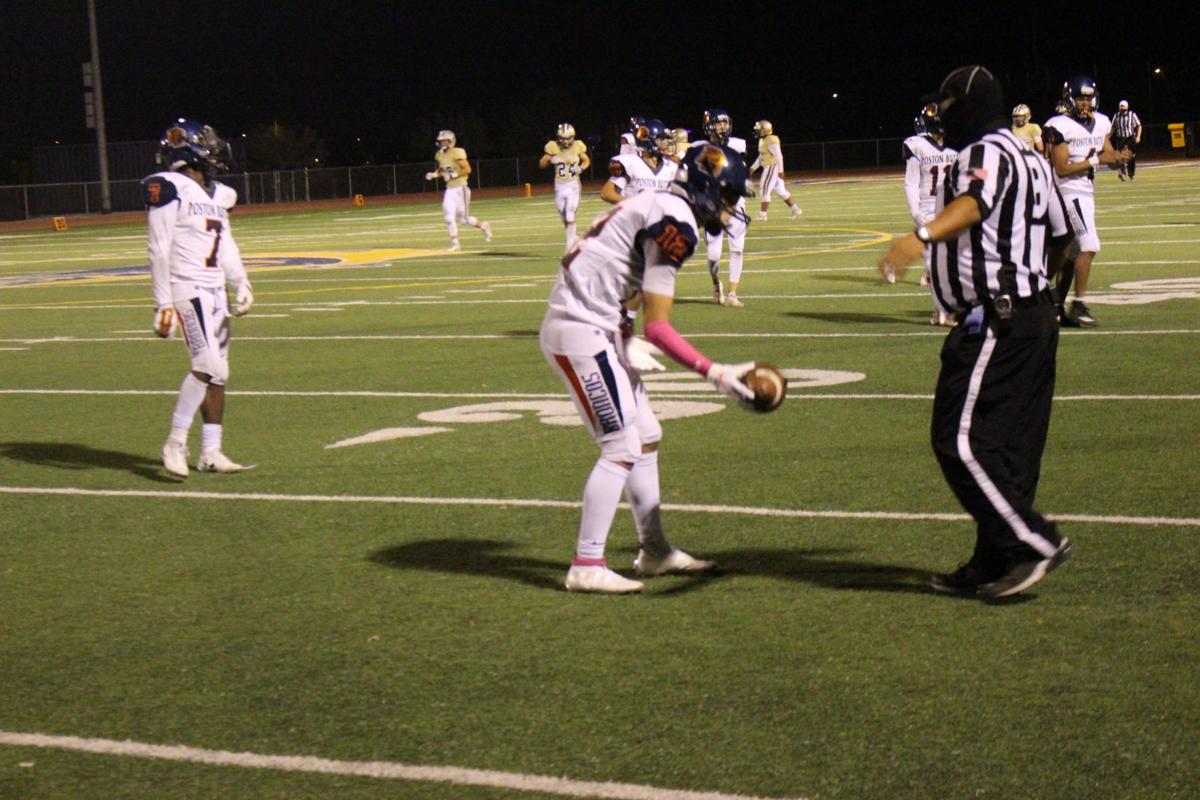 Poston Butte’s Mattias Lopez downs a punt during the fourth quarter of Friday's game against Benjamin Franklin in Queen Creek.

Poston Butte’s kicker Juan Castenada prepares for an onside kick during the second quarter of Friday's game against Benjamin Franklin in Queen Creek.

Poston Butte’s Mattias Lopez downs a punt during the fourth quarter of Friday's game against Benjamin Franklin in Queen Creek.

QUEEN CREEK — Secrets are hard to keep in sports. It’s no secret after two weeks that Poston Butte football is a very good team that likes to put away their opponents early.

Poston Butte improved to 3-0 on Friday with a 45-15 demolition of Queen Creek Benjamin Franklin.

Because of this knowledge, Benjamin Franklin felt it had a strategy in place to try and counteract the high-powered running attack of the Broncos.

It began with a methodical, exacting and at times downright slow drive taking exactly 9:15 off the clock before Poston Butte possessed the ball. Benjamin Franklin running its wishbone offense took its time and used trickery to frustrate the Broncos defense.

“They’re a machine,” Poston Butte coach Dain Thompson said about the Charger offense. “They have great energy and great spirit and they just keep doing it over and over again. We knew exactly what was in store for us tonight and our guys prepared very well throughout the whole week.

Despite the early struggles and scoreless first quarter, the Broncos found their footing and then sprinted across the field leaving Charger defenders in the dust. Poston Butte has now outscored its opponents 157-35.

When Poston Butte did explode and assert themselves on Friday, it was impressive. On three consecutive drives, they scored three touchdowns and converted for two-points to bookmark each series.

Junior kicker Juan Castenada executed two consecutive onside kicks that kept the ball in Poston Butte's possession and quieted the Chargers crowd that enjoyed the first quarter and said little after. The effort of Castaneda to keep the ball in his team’s hands made the difference.

“If I gave an MVP for the game it’d have to go to our kicker,” Thompson said. “He placed the ball in a couple different places and did exactly what he works on all the time. It’s easy to do that when it doesn’t matter, but he came through in the clutch and I think that turned the energy and we began playing Poston Butte football.”

Poston Butte (3-0) received a key boost on both sides of the ball with the return of senior running back/linebacker Nick Cococmello. While there’s only so many carries that can be spread among four running backs, Thompson likes how another healthy body gives his guys a chance to constantly impact the game.

“It makes us better on both sides of the field,” Thompson said. “We have four guys that can play back there (running back) and two more who have gotten reps back there. When we have that many guys who can play that spot, and it allows guys to play defense.”

The Broncos now return home for a matchup against the Apache Junction Prospectors on Thursday. It will be the team’s first short week of the season, but they feel confident against anyone who comes across their path in 4A.

“We have so much energy and drive during the week,” Thompson said. “It’s fun to play on Fridays but it’s a grind to work all week. They’re really having a time practicing, and when you have fun practicing the games usually are fun.”