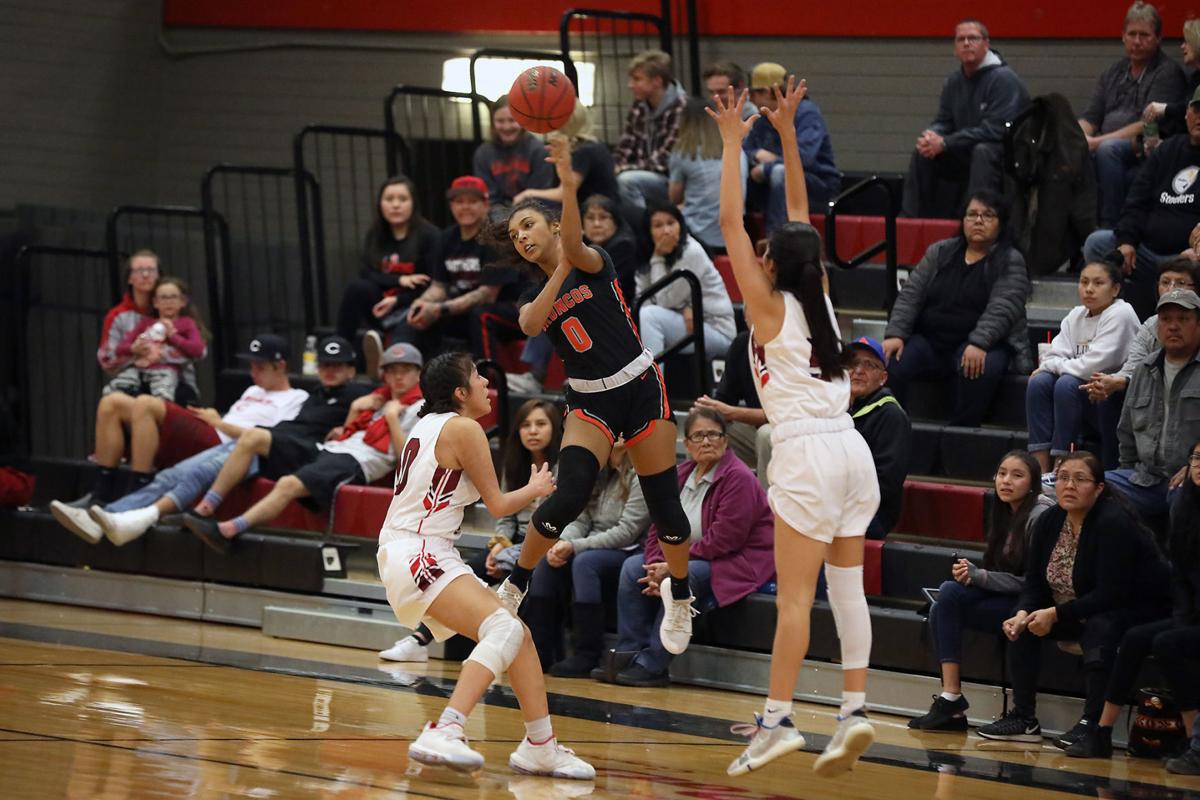 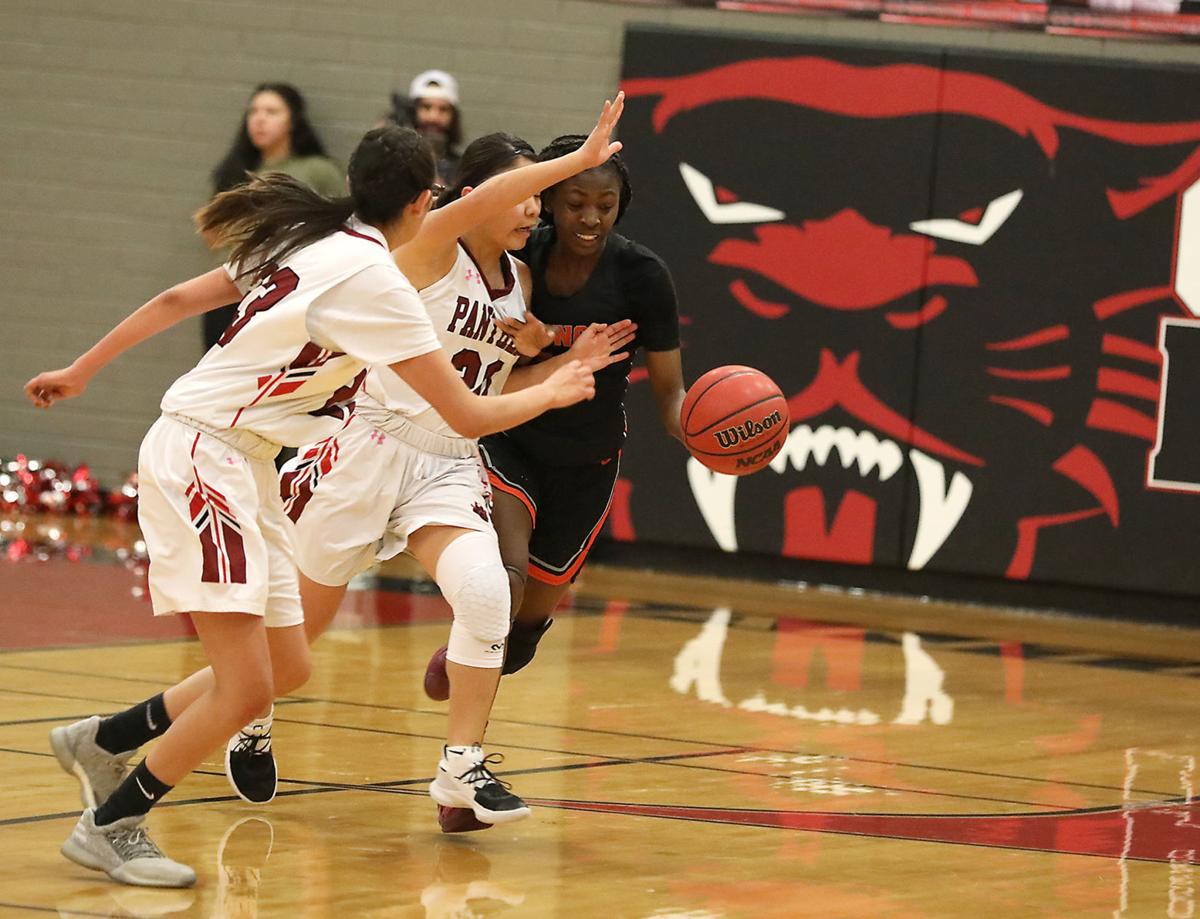 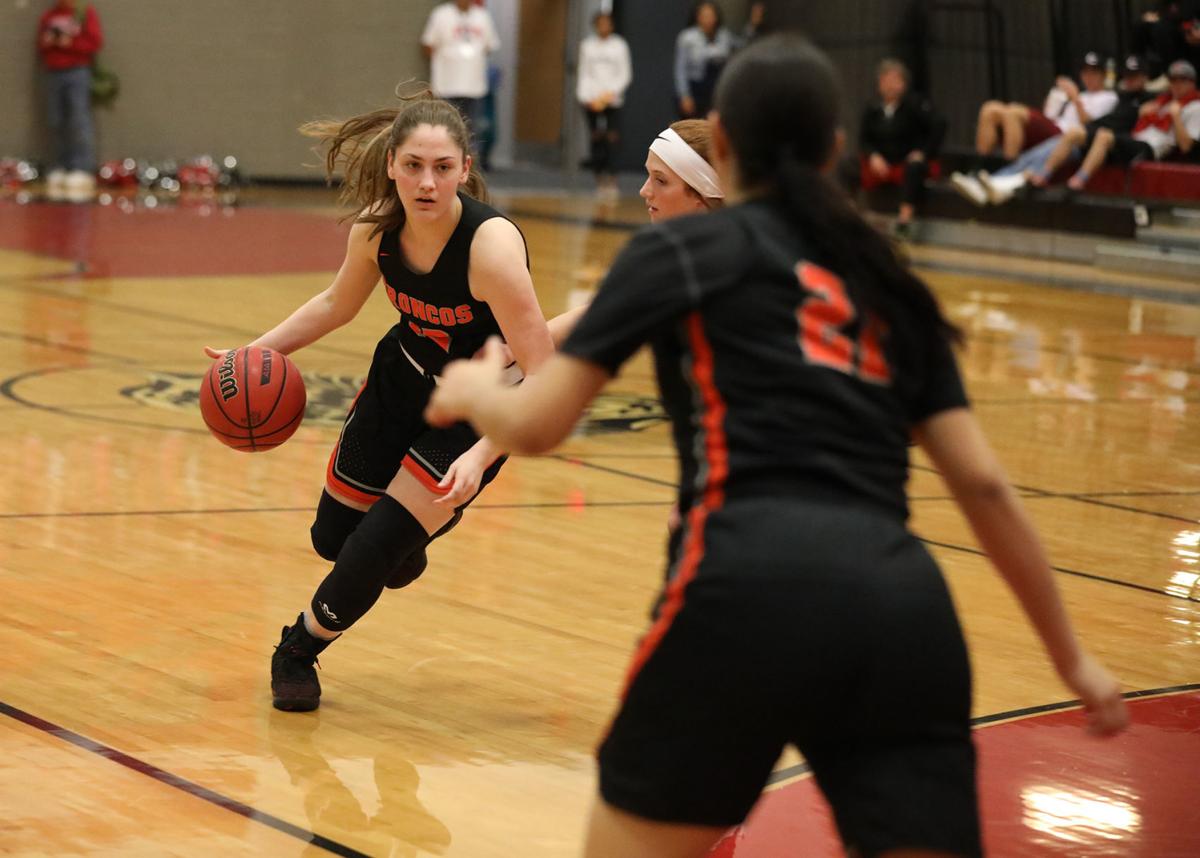 Poston Butte’s Alexis Sams looks for an opening into the paint during play against Flagstaff Coconino on Thursday in Flagstaff.

Poston Butte’s Alexis Sams looks for an opening into the paint during play against Flagstaff Coconino on Thursday in Flagstaff.

FLAGSTAFF — The 12th-seeded Coconino Panthers got just what they expected from No. 21 Poston Butte in the 4A girls basketball play-in round Thursday night.

The visiting Broncos, coached by former Flagstaff Eagle Savannah Bix, had a near upset until the Panthers peeled off a 13-2 run midway through the fourth quarter to take a 47-40 win at Coconino High School.

Coconino struggled with pressure early, allowing the visitors to rattle them a bit as they fell behind 13-10 at halftime.

“We saw a ball go in the basket,” he said of what sparked his team. “Wynter (Huskie) hit one, then she hit two, then she hit three straight, and Kiana (Manuelito) hit a couple. The biggest thing we can ever do that kills every athlete is have a little self-doubt, start to question. All you need to do is have something positive swing your way and we got that.”

Huskie scored 13 points — nine in the third quarter alone — as she hit three 3s in the third, while Manuelito also hit two 3s in the quarter as part of her 23-point night.

The shots came off smoother ball movement than what the Panthers had in the first half, when the shots were more contested by Poston Butte’s defense.

The Panthers and Broncos were knotted at 29-all at the 6:26 mark of the fourth quarter until Manuelito hit a quick 3-pointer after a Broncos missed free throw to break the tie. A few plays later, the Panthers took advantage of a turnover by the Broncos, as Manuelito came up with a steal and found Kaelynn Ashley down court for a layup.

Ashley returned the favor by assisting on a Manuelito trey — who then came down the next play on a fast break for a layup.

Manuelito capped off the run with a 2-of-2 trip to the foul line, putting the Panthers up 42-31 with 3:13 left in the game. The Broncos eventually cut the deficit a bit, but the run was too much to overcome.

Bix got a chance to coach in front of many of her former Flagstaff coaches, including Tyrone Johnson and Danny Neal – who let Bix’s squad get some shots up at the rec center earlier.

Bix said it was all a great experience for her in what amounted to a homecoming of sorts back to the mountain.

“It’s good to be back on this floor, there’s a lot of blood, sweat and tears that I had here,” she said. “As a player, I never lost to Coconino when I was at Flag, so it hurts a little more than if we played a different team ‘cause you bleed green when you graduate in Flagstaff High School. That’s a rivalry that is embedded in you forever. I wish them the best of luck, any Flagstaff school I root for and cheer on.”

Even though it wasn’t the result she would have wanted playing against her archrival, Bix was immensely proud of the way her team played.

Bix, in just her second season at the helm of the team, led Poston Butte to its best season in program history and its first-ever playoff appearance.

“I’m proud of my kids,” she said. “They did a lot of things that nobody expected them to do.”

The Broncos were led by 14 points from Zulyann Correa, as the team shot 13 of 14 from the charity stripe and forced Coconino into 16 turnovers. Taeylor Reece scored eight points for Poston Butte, and Lacey Lawrence added seven.

Coconino will learn where and who its Wednesday first-round game will be against when the state championship bracket is released Saturday.

Broncos ready to move past loss, look ahead to playoffs

Poston Butte coach makes impact on and off court

SAN TAN VALLEY — Two seasons ago, many of the girls in the Poston Butte basketball program q…