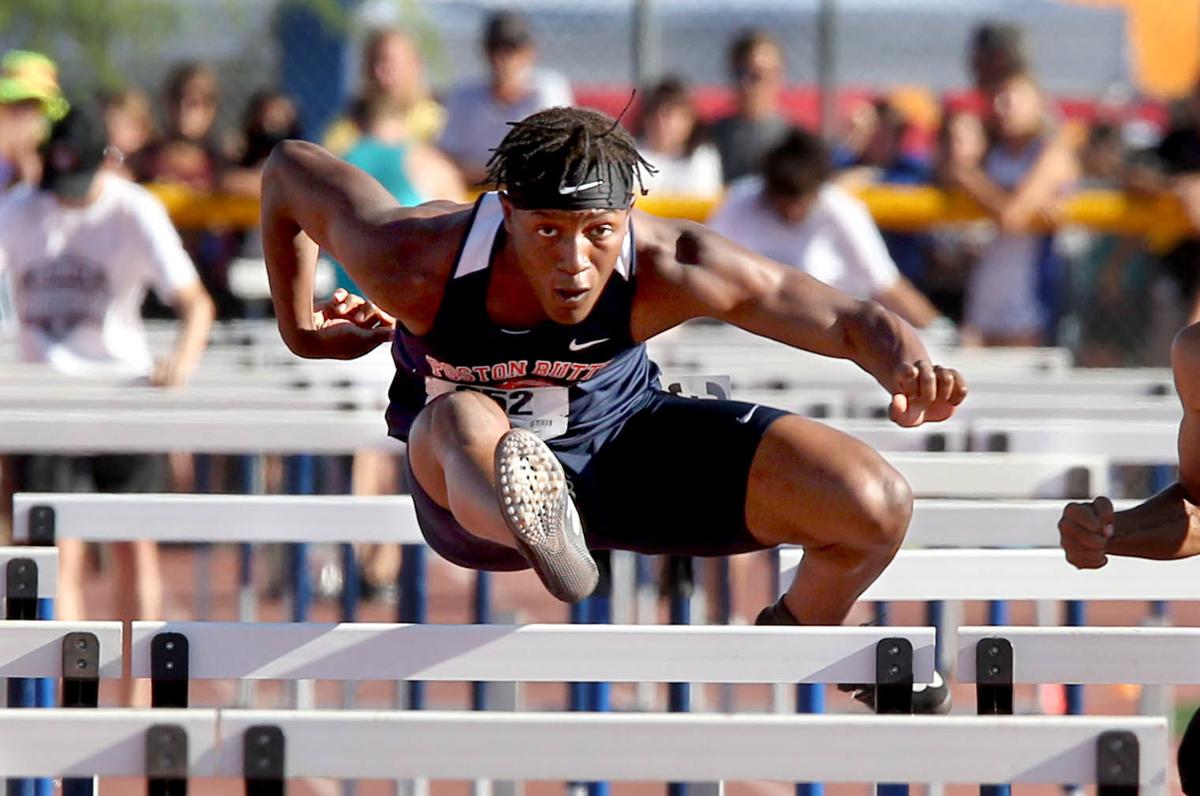 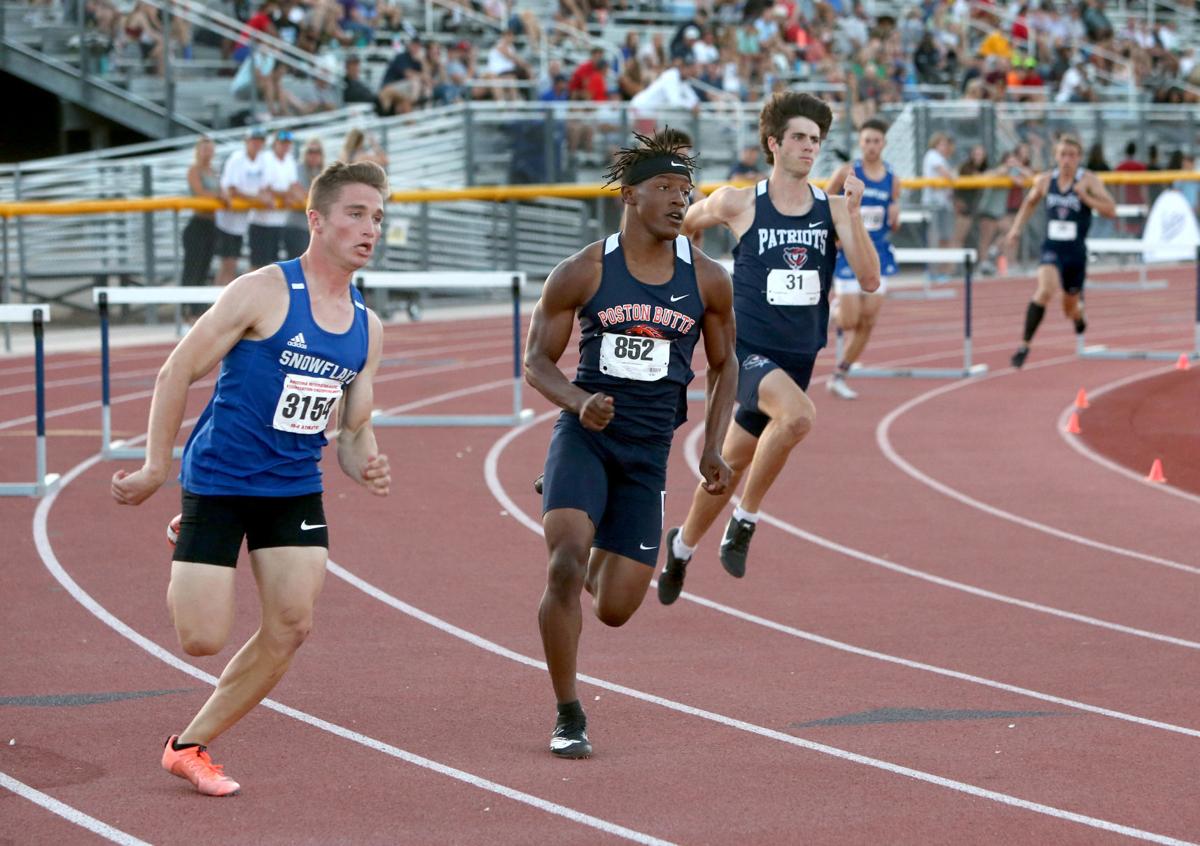 Poston Butte's Octavious Joe competes in the 300 hurdles during the Division III state track meet May 15 at Desert Vista High School in Phoenix. 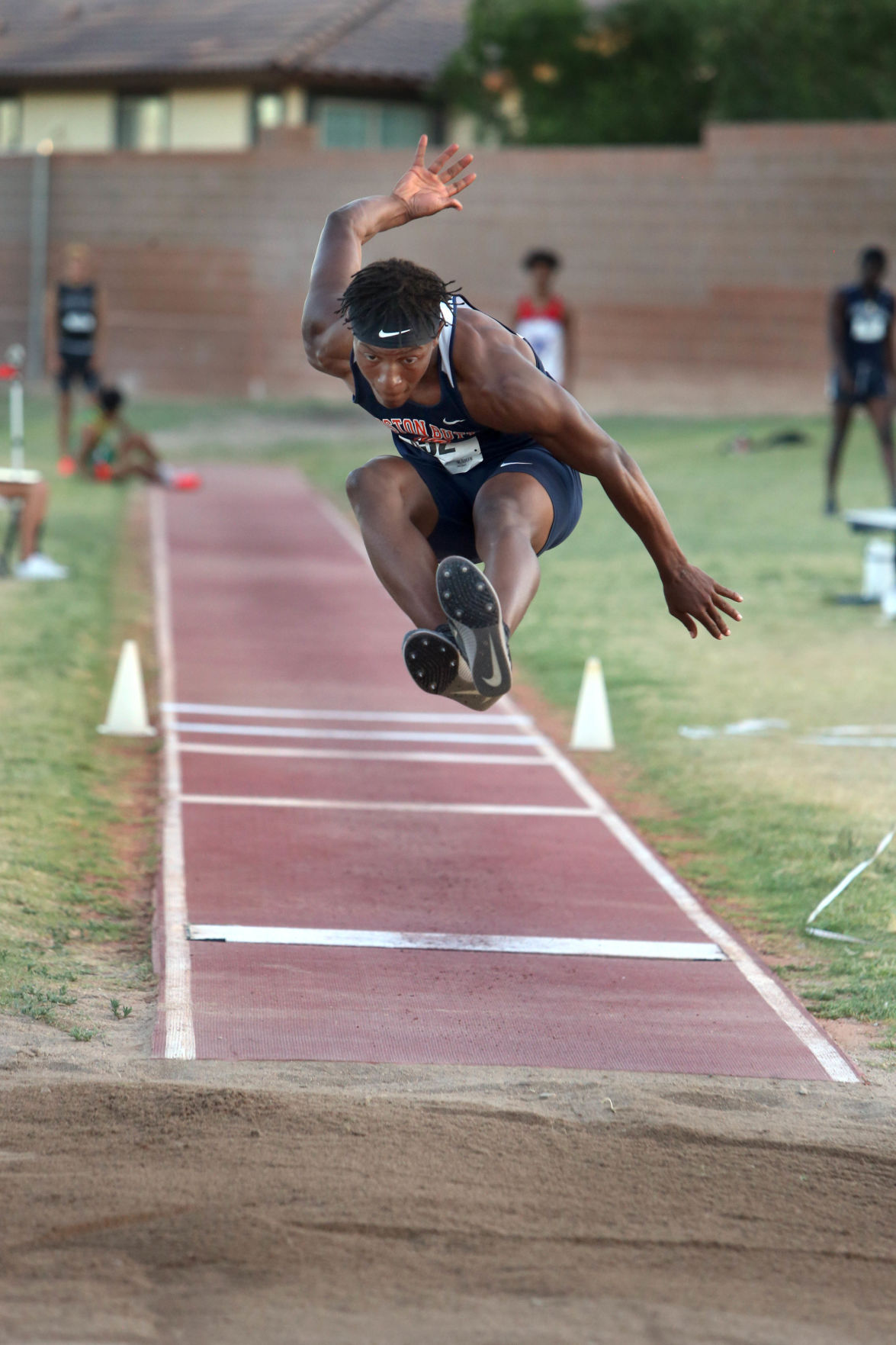 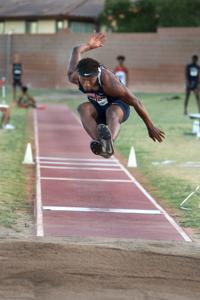 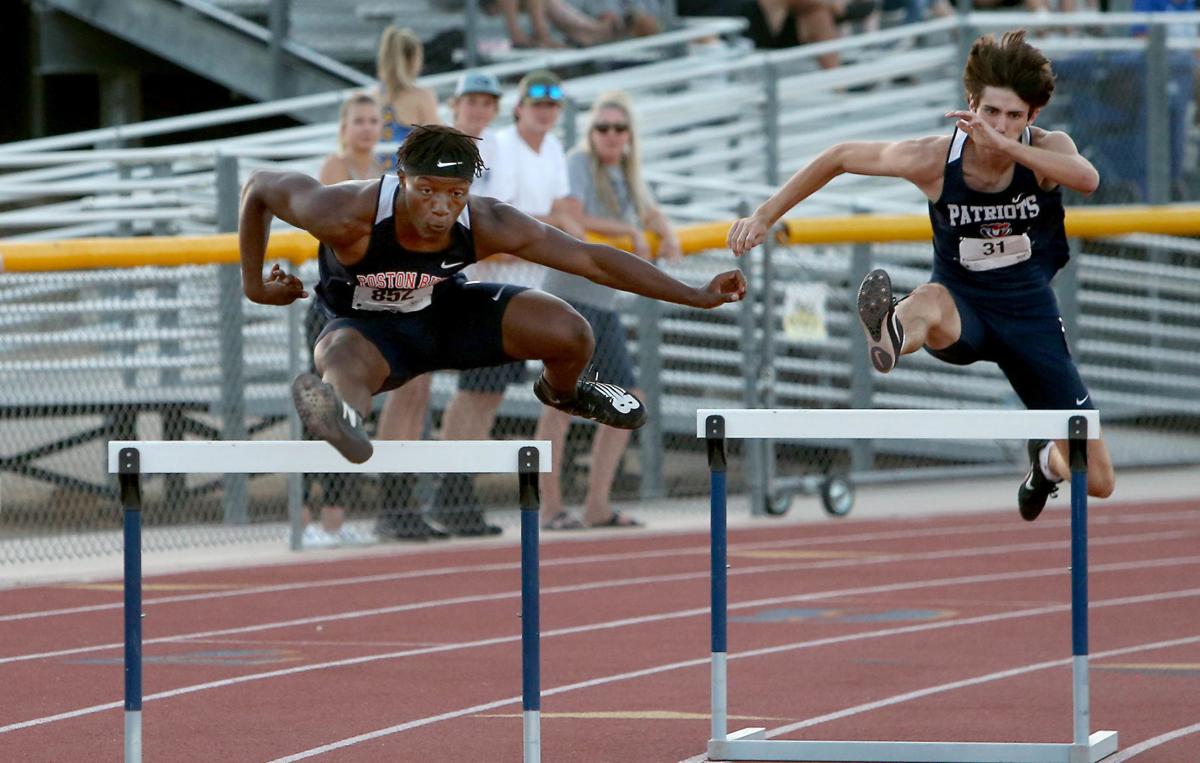 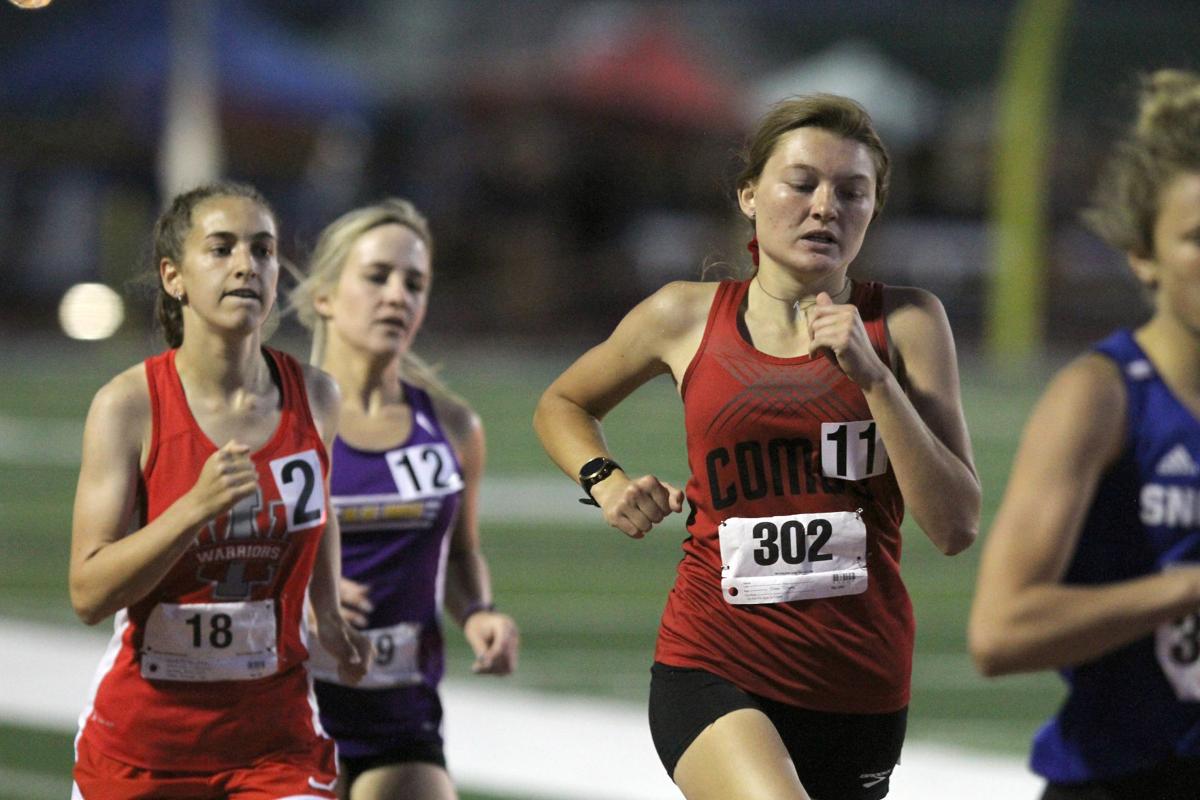 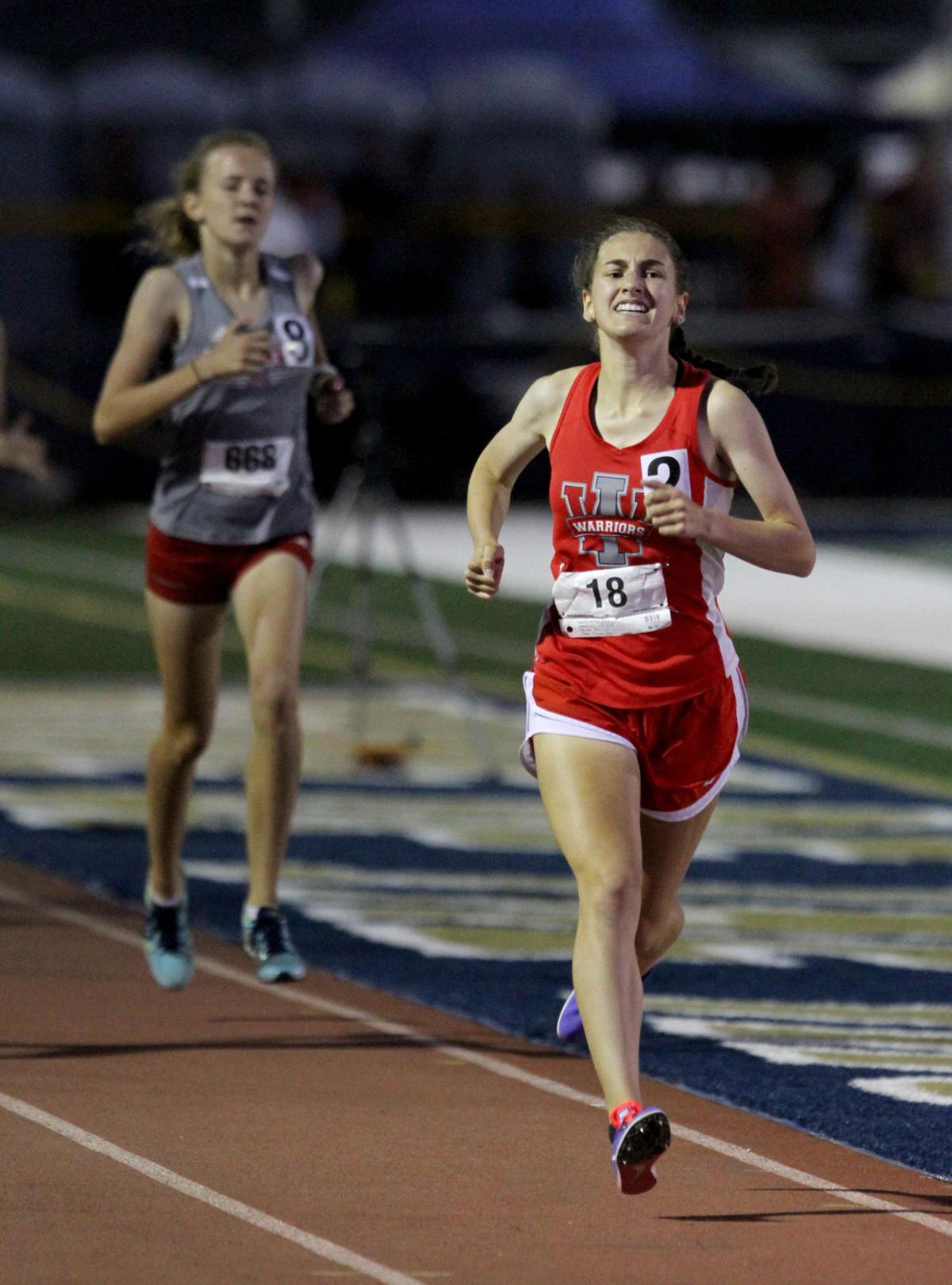 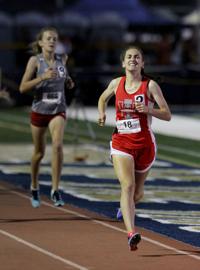 ALA Ironwood's McKenzie Fears competes in the 800 meter during the Division III state track meet Saturday May 15, 2021 at Desert Vista High School in Phoenix.

Poston Butte's Octavious Joe competes in the 300 hurdles during the Division III state track meet May 15 at Desert Vista High School in Phoenix.

ALA Ironwood's McKenzie Fears competes in the 800 meter during the Division III state track meet Saturday May 15, 2021 at Desert Vista High School in Phoenix.

PHOENIX — Poston Butte had a good day at the finals of the Division III state track meet, taking ninth in the boys team standings. And that was mostly due to the efforts of electric junior Octavious Joe.

Joe was all over the place, competing in four different events Saturday at Desert Vista High School. He competed in the 110- and 300-meter hurdles, the triple jump and the 4X100 meter relay. He was often running back and forth across the massive Desert Vista campus during and between events.

But Joe left plenty of fuel in the tank for his shining moment in the 300-meter hurdles.

In that race, Joe shattered his personal record with a time of 38.59 seconds and took home a second-place medal for the Broncos.

“It was the highlight of my day,” Joe said of his performance in the 300 hurdles. “I was kind of sad because I didn’t jump a good (triple) jump, but I still got my hurdles — (that) changed my mind.”

Joe had completed his first two jumps in the finals of the triple jump when he had to leave and race over to the track for the 300 hurdles. Whatever disappointment he felt with his triple jump effort melted away after a scintillating run in the 300 hurdles.

He felt like he could have run in the 38-second range during the prelims Friday, but he stumbled over a couple hurdles.

Then came Saturday, and Joe put everything into his finals run, coming close to taking first place in the final stretch. He was edged at the finish line by Logan Hubler of American Leadership Academy-Queen Creek, who posted a time of 38.18.

“My last straightaway, I just gave it all I got,” Joe said. “We got to like the second to last hurdle so I was like, I may have a chance, but my legs were too done.”

Earlier in the day, Joe used those legs to take third place in the 110 hurdles with a time of 15.23. His teammate Nicholas Patterson finished seventh in the race at 15.89 seconds, adding another two points to Poston Butte’s team total.

Joe also helped the Broncos to a sixth-place finish in the 4X100 relay. Along with Amari Gilmore, Jevon Johnson and Terraude Kisto, the relay team ran a time of 43.44. That was a PR for the team and the sixth-place finish was three spots higher than their ranking (ninth) heading into state.

Tired legs led to Joe settling for ninth place in the triple jump at 42 feet, 5 inches.

“I feel like I did pretty good today. I know I scored points for the team and helped out a little bit,” Joe said.

And Joe isn’t done with his track and field exploits this year. He’s going to try his hand at the decathlon May 24-25 at Queen Creek High School. It’s something he’s never done before, but he said he wants to see what he can do and maybe break some school records.

In the girls meet, the 4X100 relay team for San Tan Foothills finished sixth with a time of 51.20. It was a remarkable feat for a team that came into state with just the 17th-fastest time in D-III this season at 53.02.

The Sabercats’ blazing time was achieved by Tatiyanna Johnson, Katahvyah Benyahmeen, Armani Rodriguez and Naiomi Hereim, scoring the only three points for the girls team.

McKenzie Fears of ALA-Ironwood grabbed the only three points for her team by taking sixth place in the finals of the 3,200 meters Friday. She ran a time of 11:56.30, annihilating her previous PR of 12:29.56.

Fears, a senior, came up just short of scoring points in her two events Saturday, finishing ninth in the 800 meters and 10th in the 1,600.