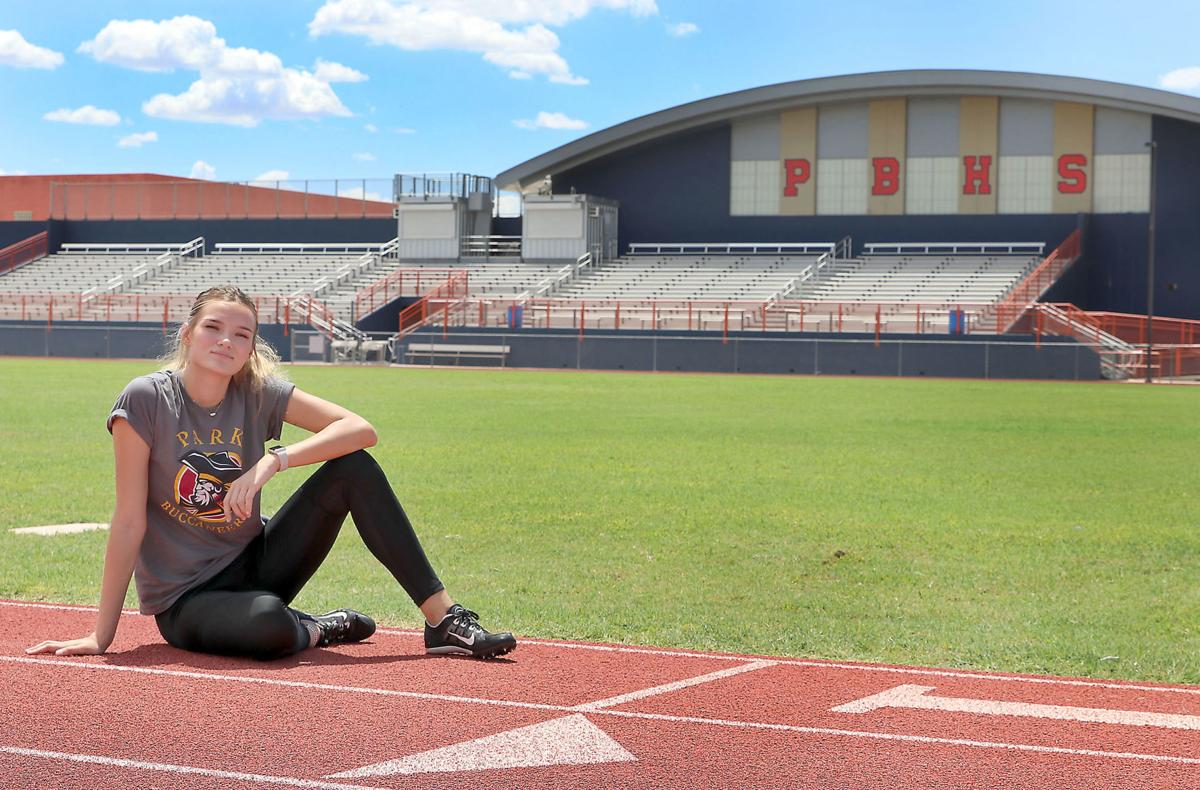 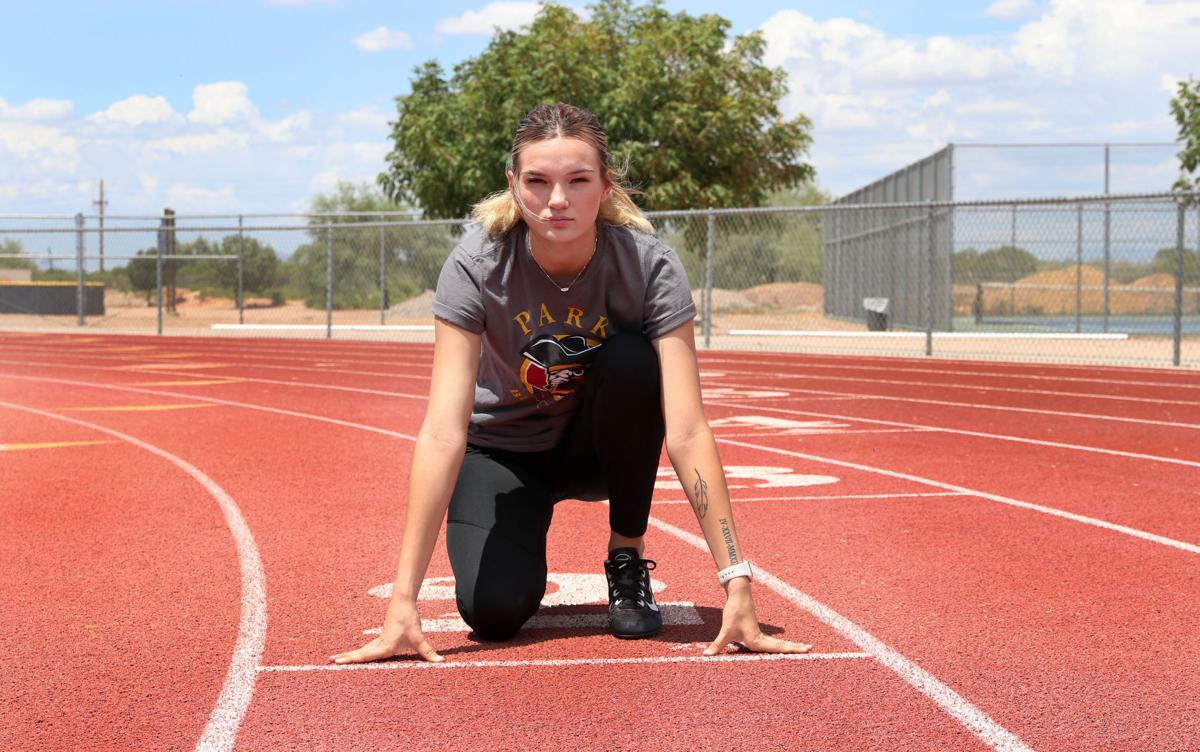 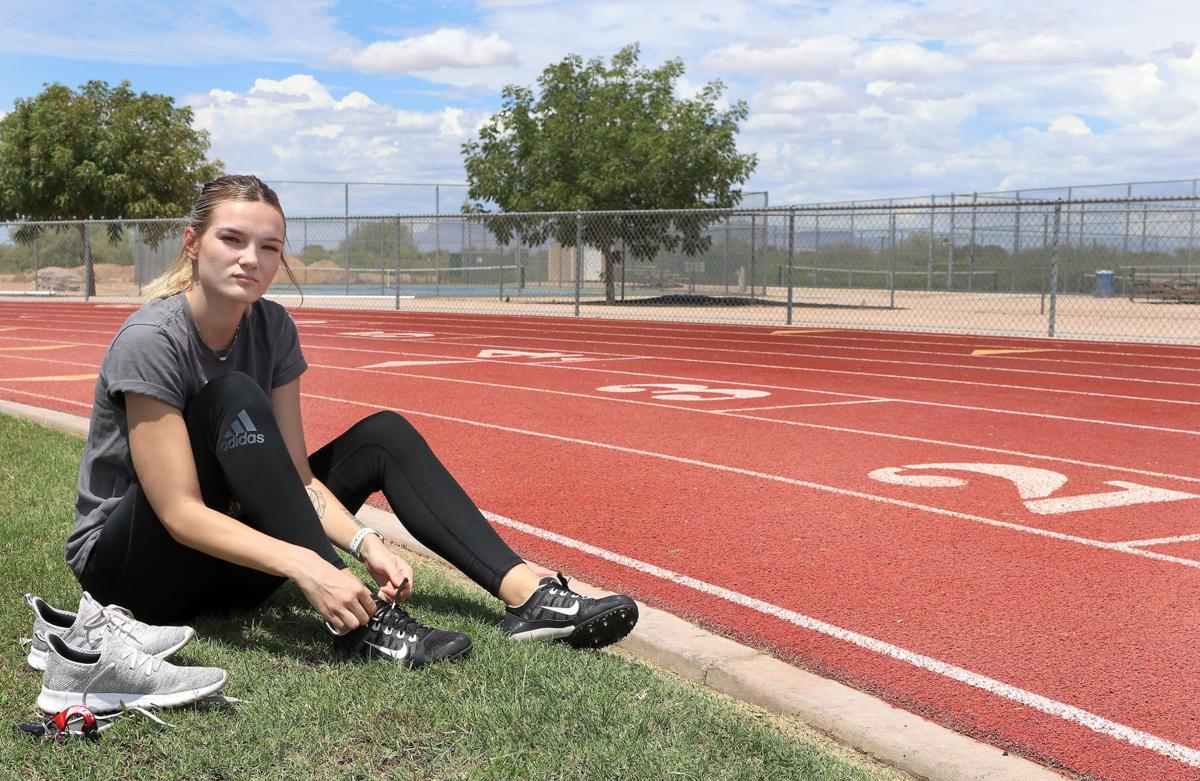 SAN TAN VALLEY -- It’s been a rough year for many high school athletes, mostly because the COVID-19 pandemic has spoiled their seasons.

For former Poston Butte volleyball player Samantha Keefe, her senior year took a dark turn before the pandemic as her season was cut short after she suffered a torn ACL near the start of the season, and then she also missed her final track season rehabbing the knee before sports were canceled.

But despite all the hurdles she had to overcome one positive is that Keefe will have the opportunity to get back on the track and possibly the volleyball court as she will continue her academic and athletic career at Park University in Gilbert.

“I had this big ole idea that I was going to go play volleyball at the college level,” Keefe said. “When I found out that I had torn my ACL I thought that everything was over. I was like, ‘Well that’s it. That’s done.’ I didn’t think I was that good at track. It was kind of just to get me in shape for volleyball.”

Her former track and field coach Brendan McMaster from Poston Butte, who is now the head coach at Park U, thought differently.

“McMaster came to me,” Keefe said. “He said, ‘Hey, I heard about your injury but here’s the thing, I looked at your junior year stats, I saw you personally as your coach and you have a lot of potential. I’m going to give you a shot. If you can prove it to me then go for it.’

Keefe was recruited as a javelin thrower after having competed in the event one time during her junior season and nearly hitting the provisional mark required to qualify for state. In addition to participating in javelin, she also runs in the 100, 200 and 400-meter events.

“Javelin, it’s cool because it makes me feel like it’s the end of the world and I’m throwing a spear,” she said. “It was more like love at first sight. Coach literally came to me the day of the last meet and said, ‘You’re going to throw javelin tonight and you’re going to qualify.’ I was like, ‘Rewind. How am I supposed to do that?’ I was out here for two hours, throwing back and forth, then the meet came and I was like a meter short of qualifying.”

The plan at that time was for Keefe to participate in javelin her senior year, but she had her knee surgery in January to repair the ACL tear.

Keefe admitted that when McMaster first reached out to her about joining the Buccaneers girls track and field team in Gilbert she was unsure because she didn’t believe that she was the same athlete she had been before the injury.

McMaster’s response was, “No, I know you’re a better one.”

In a short six months she has already finished her physical therapy and the whole rehab process.

“I told my surgeon I had an idea and we came up with this plan and it was a pretty gruesome PT plan,” she said. “We basically cut my physical therapy time in half, so we basically doubled up on my process and we went really, really hard. There were days where I was not feeling it, I just wanted to quit but there were a lot of people around me that were like, ‘You really need to keep going, you have an opportunity ahead of you and you just need to keep going.’”

Keefe added that she really wanted to be back on the track as soon as possible and didn’t want to be on the bench once school started, even it was just practice. Once she found out that it was possible to shorten her rehab time frame, she decided to go ahead with all the water aerobics, electroshock therapy and everything else that could get her muscle built back up.

Keefe is thankful for her family, friends, teachers and volleyball coach Belinda Quesada for really pushing her through what she says was her lowest point.

“I thought I was alone,” she said. “When you see both of your teams doing what you love to do it’s kind of like you’re alone. You’re just sitting on the bench by yourself watching people do what you want to do.”

Keefe starts her day with 4:30 a.m. workouts and sprints. She then goes back home to sleep a bit before heading off for work and then repeats it all the next day.

She’s thankful for the opportunity that McMaster has given her and the huge leap of faith that he’s taking in her.

As for volleyball, Keefe isn’t ready to give up the sport just yet. She has talked with the coach at Park U about possibly being a walk-on. But she believes that may have to wait until next year, depending on the NAIA’s decision concerning fall sports and the possibility of moving them to the spring.

“The community within volleyball and track is just insane,” Keefe said. “I just don’t know what it was about volleyball really; it was just everything and having stability because I don’t know what I would do if I didn’t have volleyball. Volleyball kept me out of trouble for years, over the summer I wasn’t allowed to be in trouble, I didn’t have time to be out doing stuff. It kind of defined who I was. I put a lot of pride into my sports and volleyball was the first one I found that I was like, ‘OK, I need to do this and I need to do that and I want to play volleyball.’ Something clicked between me and the game, and it just stuck.”

Academically speaking, Keefe is excited to finally study something she wants to learn about.

“I’m going to major in psychology with a minor in criminal justice so eventually I’m hoping to become a profiler for the FBI,” she said. “It’s just always interested me in the way people work and the way people think and why they think like that. Behavioral science is just something that’s always kind of intrigued me.”

She’s also looking forward being back in a routine that involves sports and having a team again. Although she won’t be at home, she’s glad that home is only a short 40-minute drive from the Park U campus.