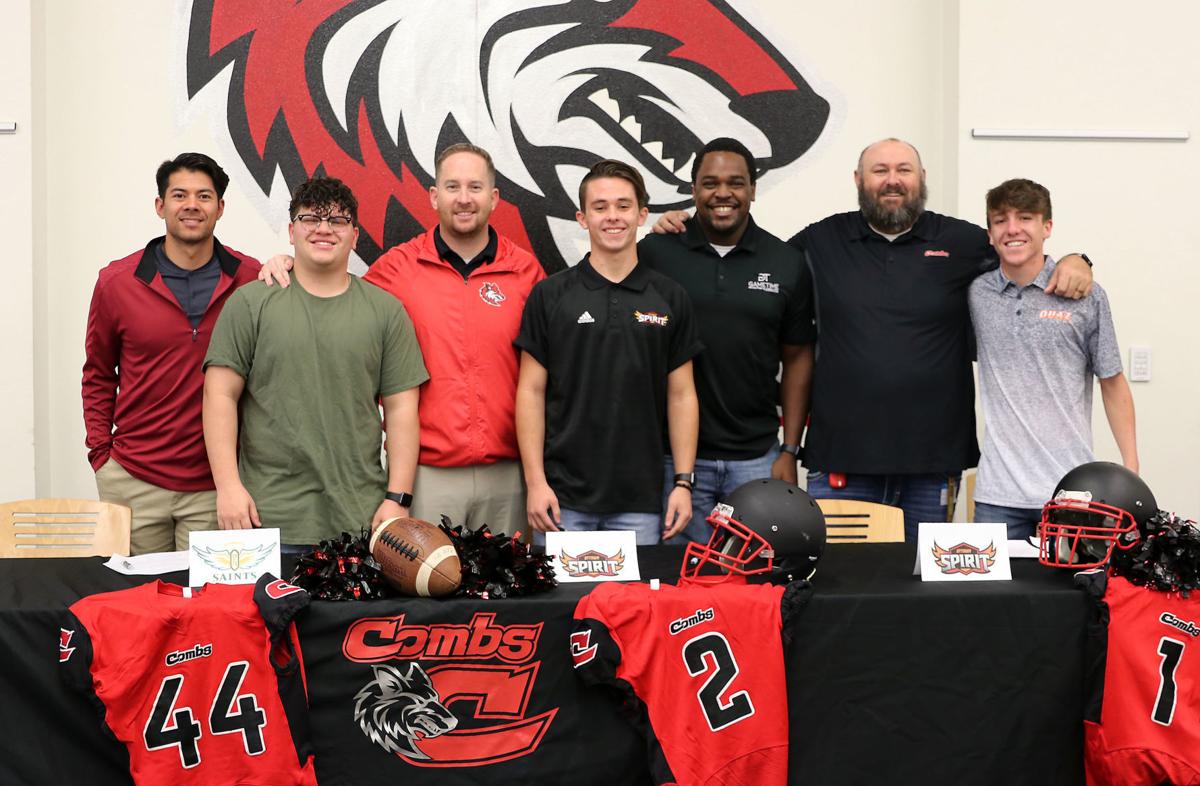 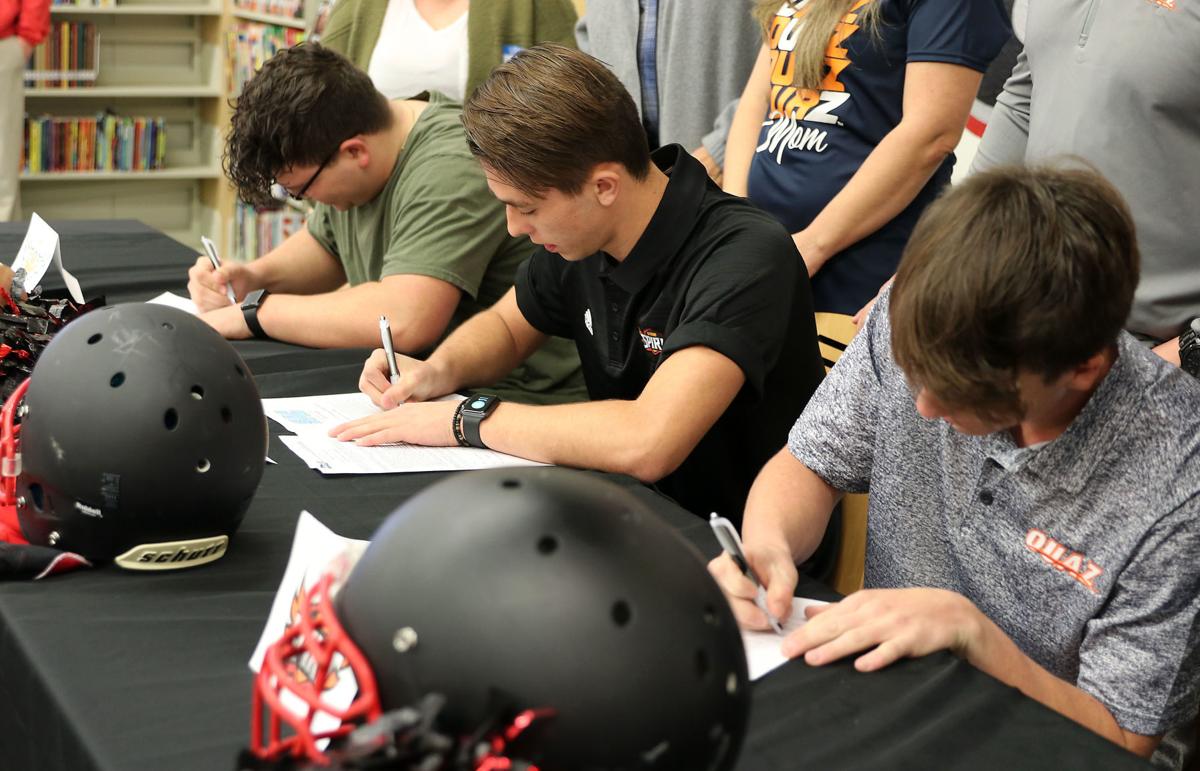 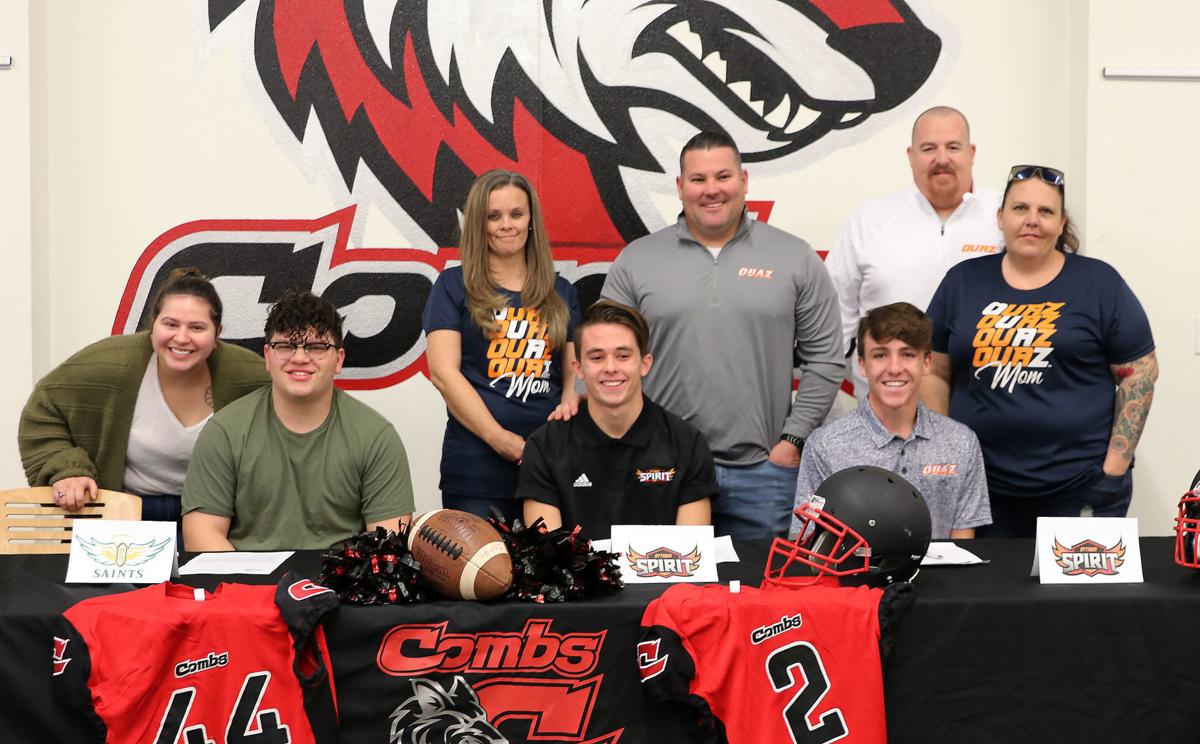 SAN TAN VALLEY — One of the biggest decisions for a high school student is deciding what comes after graduation.

For three Combs football players the decision was to continue playing the sport they love at schools they believe will help them set them on the right path toward their careers.

"It's obviously a proud moment as a football program to have guys sign and move onto the next level," coach Travis Miller said. "It's big because they're all captains. As a person who tries to build a program and then doing it again every year, it's a good example to my younger guys. If you work hard and pass your classes and you perfect your craft, then you can play at the next level."

Ian Loggins, Brayden Bernal and Sebastian Janik all signed their letter of intent to play college ball at Ottawa University in Surprise and Presentation College in South Dakota.

"These guys are going to be college football players and they don't have all the statistics that a D-I player has," Miller said. "They're not 6-3, 300 pounds, but they all have done enough to make it to where they can play at the next level, and that right there shows that you can do it, and as a coach I couldn't be more proud of their achievements."

Loggins and Bernal, who have been best friends since seventh grade, will stay close to home and attend the in-state Ottawa University while Janik will travel to Aberdeen, South Dakota.

"I focused on this a lot and thought about it for the past three or four months," Loggins said. "Ottawa kind of came out of nowhere because I went out to a game and was actually looking at the opponent as a recruiting thing, and it turns out we found them, and I really love the school."

Loggins hopes to become a mechanical engineer and wants to be part the newly established program at OUAZ. He added the opportunity of receiving his master's degree in five years was also a big selling point and continuing to play with his best friend was the cherry on top.

"I'm looking forward to growing with my teammate and best friend and him being in the same program," Loggins said. "It's amazing, we can even house together so just having this opportunity to go to the same school and growing for another years, I believe it's going to be a great experience for the both of us."

Bernal likes that he will be able to continue to lean on Loggins for support.

"It was kind of like a decision that if I was doing this by myself it would be a little more iffy-er," Bernal said. "We're like brothers. It's a great experience because not many people get to go on the recruiting process with their best friend and say hey, we might be able to go play college football together."

Bernal also liked OUAZ because of the rigorous programs and how quickly he can get his degree.

"It's beyond football there, and that's why I loved it," Bernal said. "I'm not going to play in the NFL, I'm trying to get my education and be successful in life."

Bernal said the whole recruiting process was fun, but it was difficult to make a decision on which school to attend. He mentioned that he's on the fence about being close to home because he likes that he'll be able to do his own thing away from home, but he's not very fond of having his parents nearby.

"I live in the East Valley, so the whole West Valley thing, I've never really experienced that," Bernal said. 'It's a nice thing that I can come home on the weekends if I need to and I don't have to fly back for Thanksgiving or Christmas."

Janik decided on Presentation College because of its nursing program.

"I feel that it's the best for my education and my career moving forward," he said. "It's a really good atmosphere up there with the football team, but it was mostly just the nursing program."

Janik added being away from home will be tough, but it's something he has to do for himself.

"I'm looking forward to meeting new people and being in a different environment where I'm not comfortable so I can become comfortable," he said. "Getting my education and playing some more football."

Some of the lessons Janik learned while being a Coyote that he will carry on into college are how to be a good figure on and off the field and how not to slack off with his grades.

"They're leaders," Miller said. "They weren't cancerous for a football team, so their personalities and the way they are outside, they're just good people. They're just another boy in a long line of kids that we've had come through here that are just good kids. They'll be hard-working dads and fathers one day that'll benefit their families, and they're on that next step in that path."