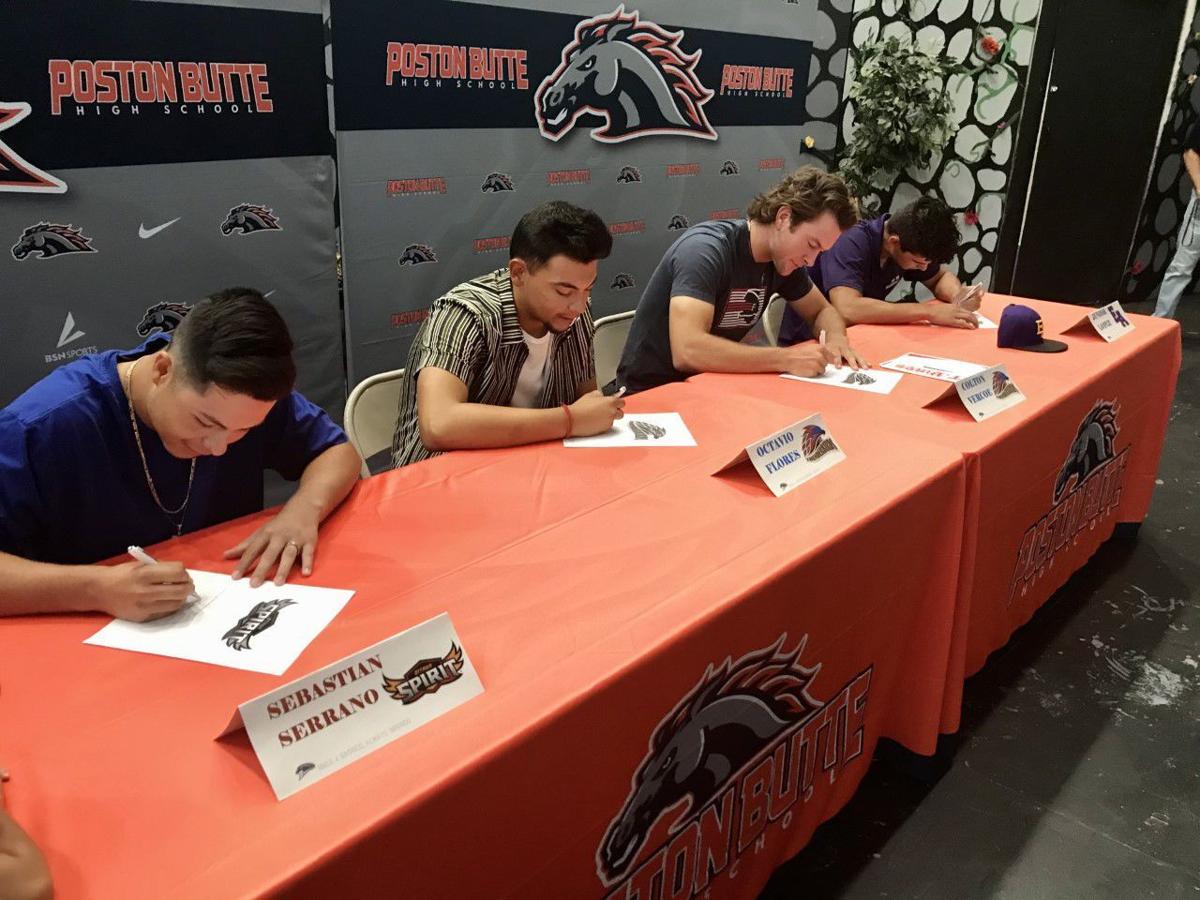 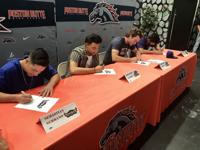 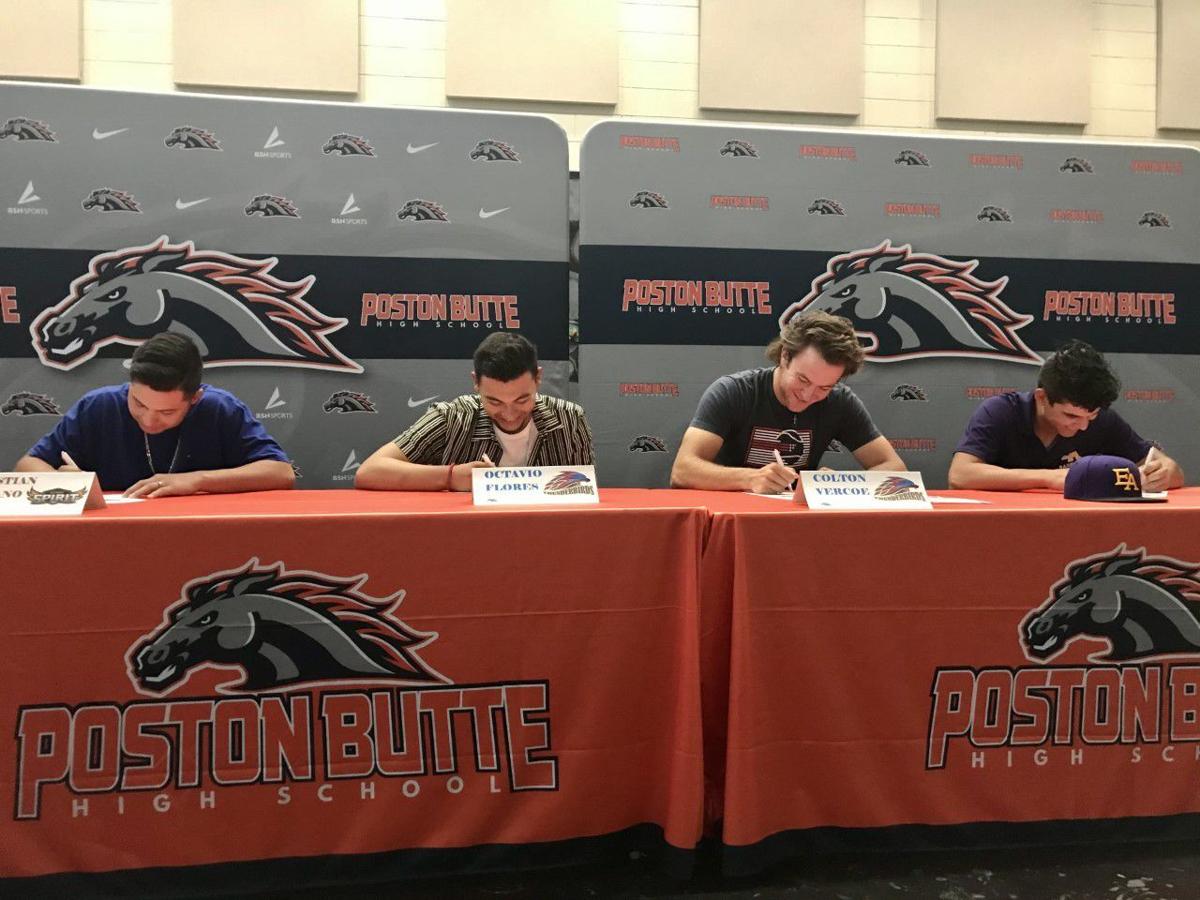 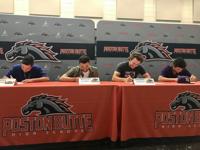 SAN TAN VALLEY — The Poston Butte baseball program had already broken records and achieved things no other team in school history had done. Why not add one more accomplishment to the resume and send four players to the next level?

That’s what happened Friday morning when four Broncos seniors signed to play college baseball. The signing event came less than 24 hours after they lost to Gilbert Mesquite in the 4A semifinals.

It was a season of firsts for the program — the first ever outright region title (4A Black Canyon), a school-record 20 wins (20-3 record) and a trip to the semifinals, the furthest the program has ever been in the state playoffs.

Sebastian Serrano, Octavio Flores, Colten Vercoe and Junior Lopez all made it official by choosing the colleges where they will continue their baseball careers in a signing ceremony at Poston Butte.

“I wasn’t really sure if I wanted to continue playing because there was a lot of things going on,” said Serrano, who will play at Ottawa University in Surprise. “I did a practice with Ottawa and they told me they liked me, and they really let me in as one of them. It was just a really good spot for me.”

Serrano said he was looking forward to just getting a job and making some money. But he said the offer from Ottawa was a good one, and now he’s ready to play some more baseball.

He finished the season hitting .456 with five doubles, four triples, 22 RBIs and a team-high 20 walks while mostly playing infield.

Vercoe and Flores will be teammates again, as they both signed with Mesa Community College. Vercoe made up his mind to go to Mesa last fall, and Flores later decided — about two weeks ago — to join him and the Thunderbirds.

“The coaches made it look like a good environment, somewhere where I could take my talent to the next level,” said Flores, who will be a pitcher at Mesa. “Since I was a little kid, I always wanted to play college baseball … It’s exciting because you can only dream about it, that feeling, but once you’re here it’s unreal, and it just locks it in; it’s like, ‘Alright, it’s actually happening.’”

Flores was Poston Butte’s No. 2 starter, and he put up some outstanding numbers with 51 strikeouts and just 16 hits allowed in 30 innings to go along with a 6-0 record and a microscopic 0.70 ERA.

And that’s not the only talented arm going to Mesa, as Vercoe was the Broncos ace and workhorse, throwing a team-high 58 innings. He struck out 81 against just 16 walks, posting a 7-3 record and a 1.93 ERA. Vercoe was named the 4A Black Canyon Player of the Year.

There were some other schools involved, but Vercoe knew he wanted to go to Mesa.

“It just came down to when I visited Mesa, I really liked the fit, the coaching style and the amount of experience their coaches had,” he said. “Some of them have over 30 years experience, so they really know what they’re doing. Especially with the success of the program.”

“I’m excited to just focus on one thing,” Vercoe said. “That way I can really get going at [pitching] and not have to worry about working on other things as well.”

Flores and Vercoe both said they want to continue their baseball careers after their time with Mesa.

Then there’s Lopez, the athletic, slick-fielding shortstop for the Broncos. While his three teammates are staying in the Phoenix metro area, Lopez is heading to Thatcher, about two-and-a-half hours away in the southeast part of the state at Eastern Arizona College.

“When they first saw me I was playing in a tournament for a scout team,” Lopez said. “The coach just instantly, as soon as the game ended, he came up to me and seemed really, really interested and just stuck with me ever since.”

Two things really appealed to Lopez about playing for the Gila Monsters — he said they are dedicated to getting bigger and stronger in the weight room and they also like to play as many games as possible.

The EAC coaches told Lopez they want him to stay at shortstop, which says a lot about his ability with the glove. He’s also a switch-hitter, and he feels equally confident in his ability to hit from both sides of the plate.

Like Flores and Vercoe, he also wants to continue playing baseball after his time at the junior college level.

“A four-year school or try and go straight into the (MLB) draft if I’m able to,” Lopez said. “That’s definitely my top goal right now.”