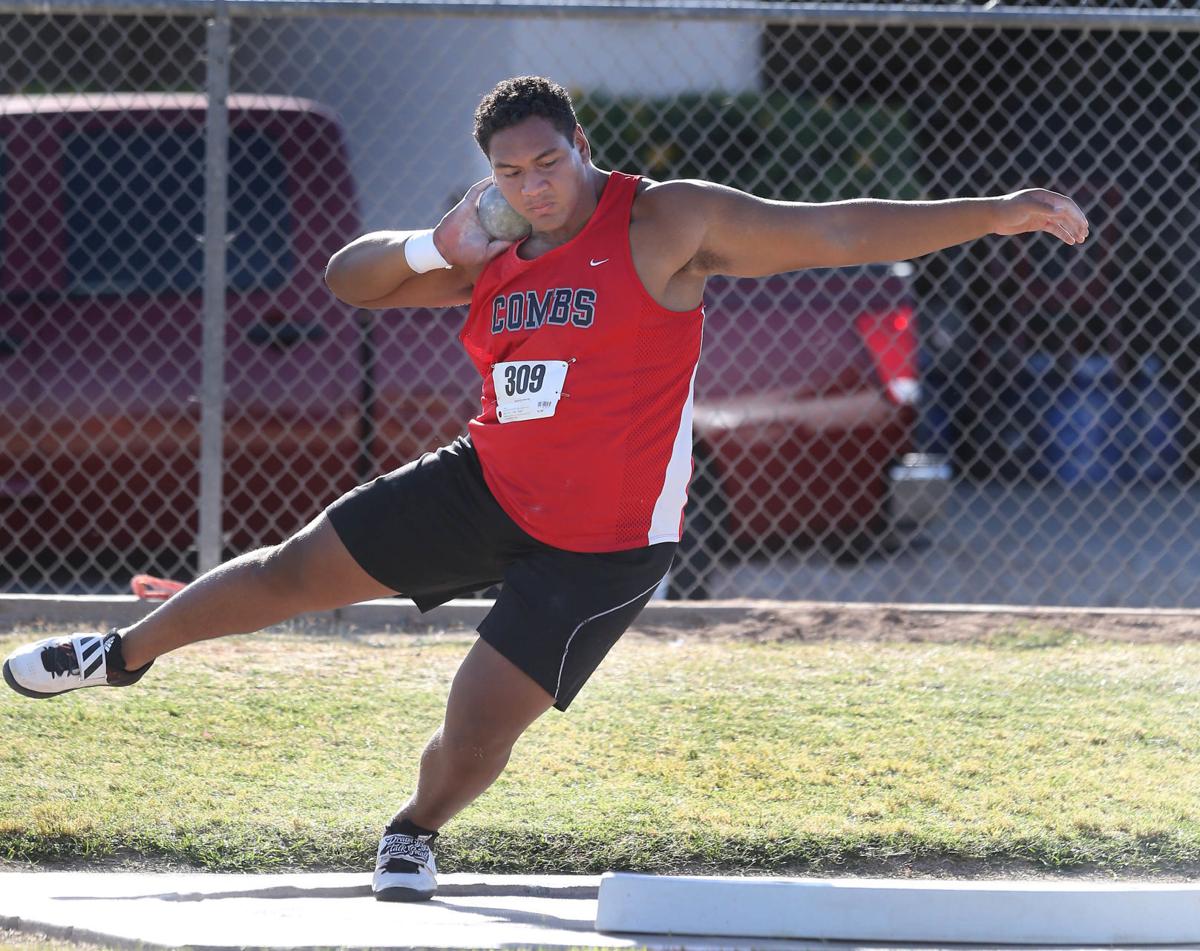 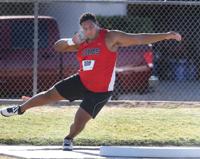 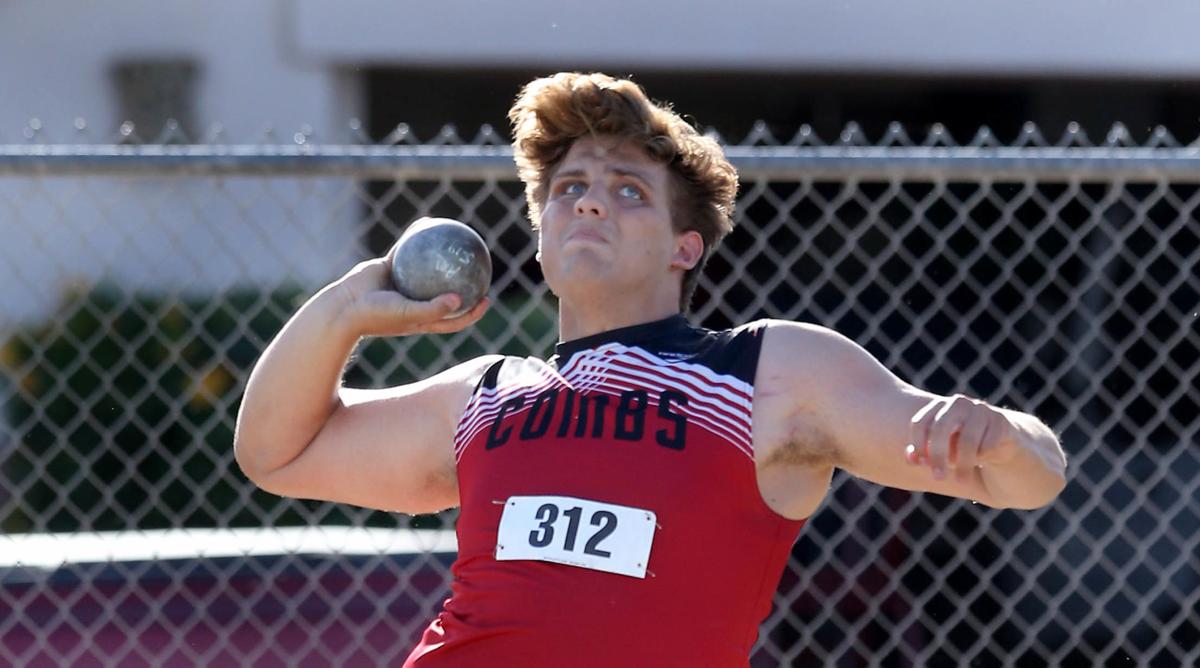 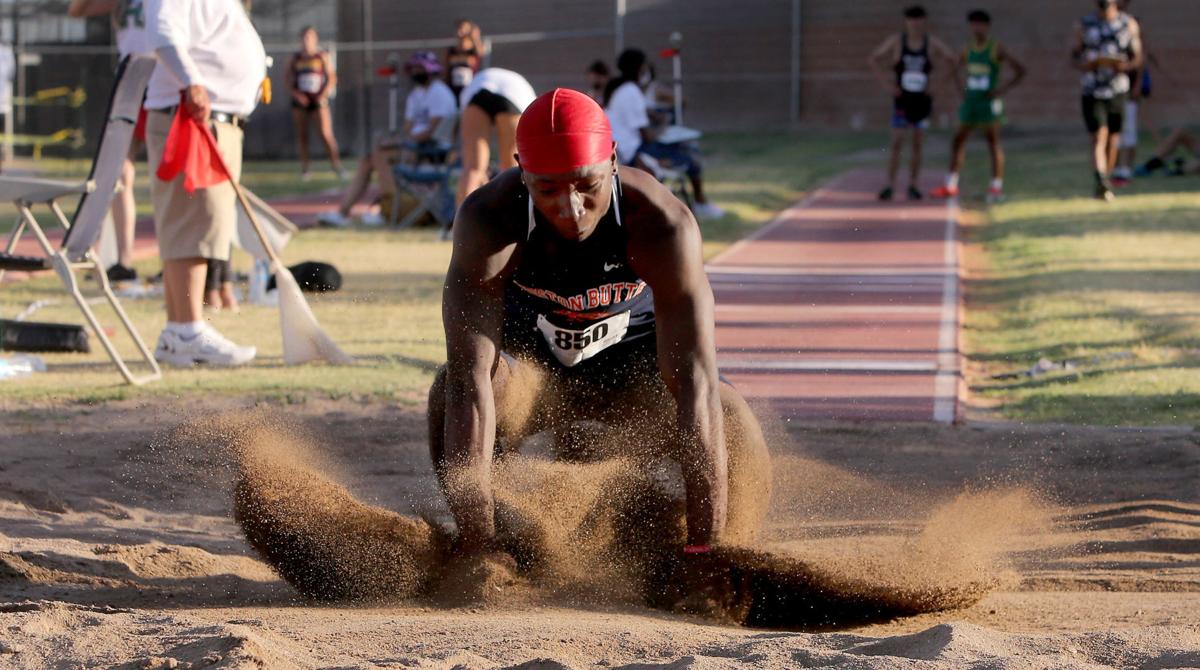 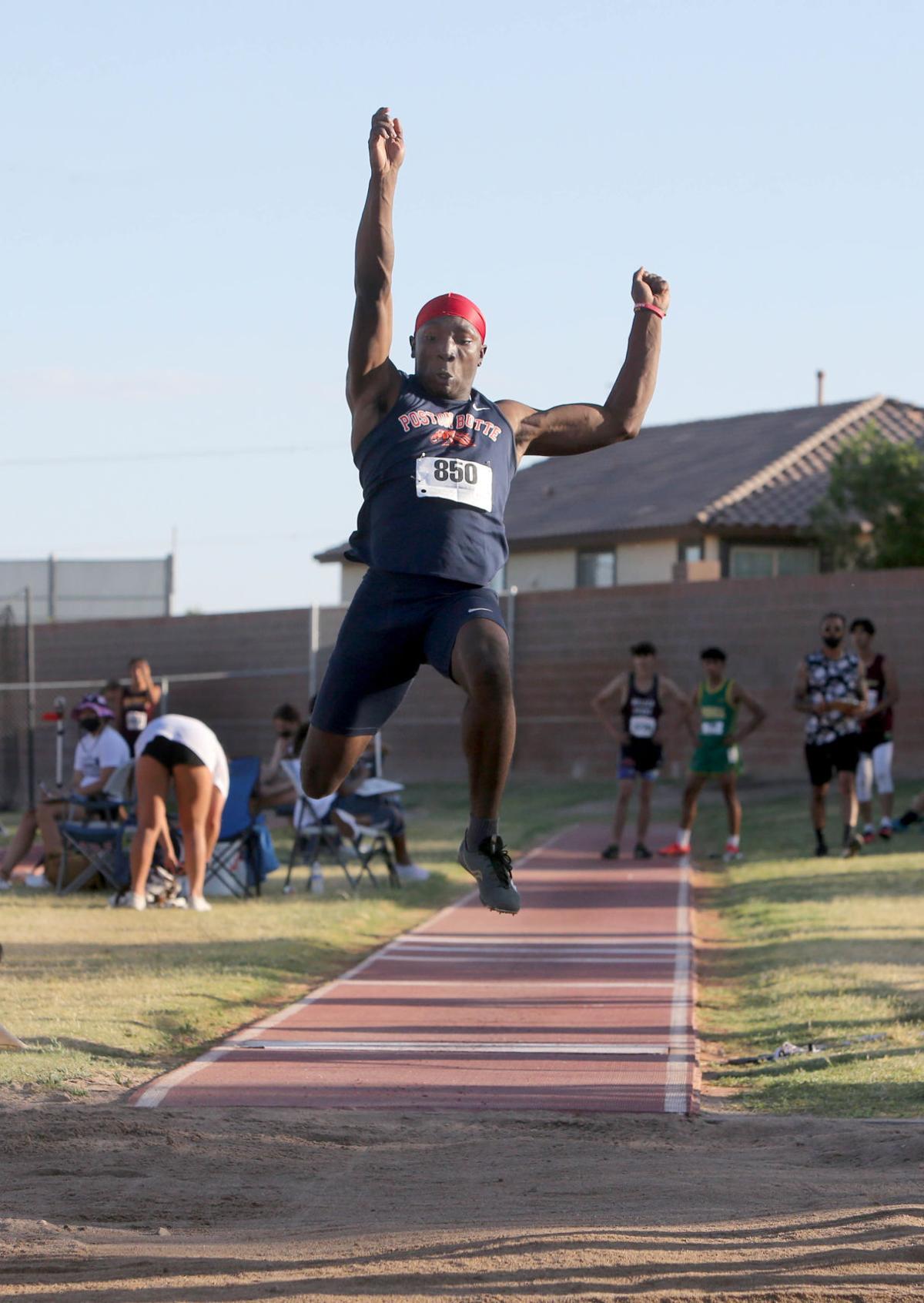 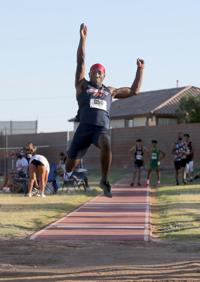 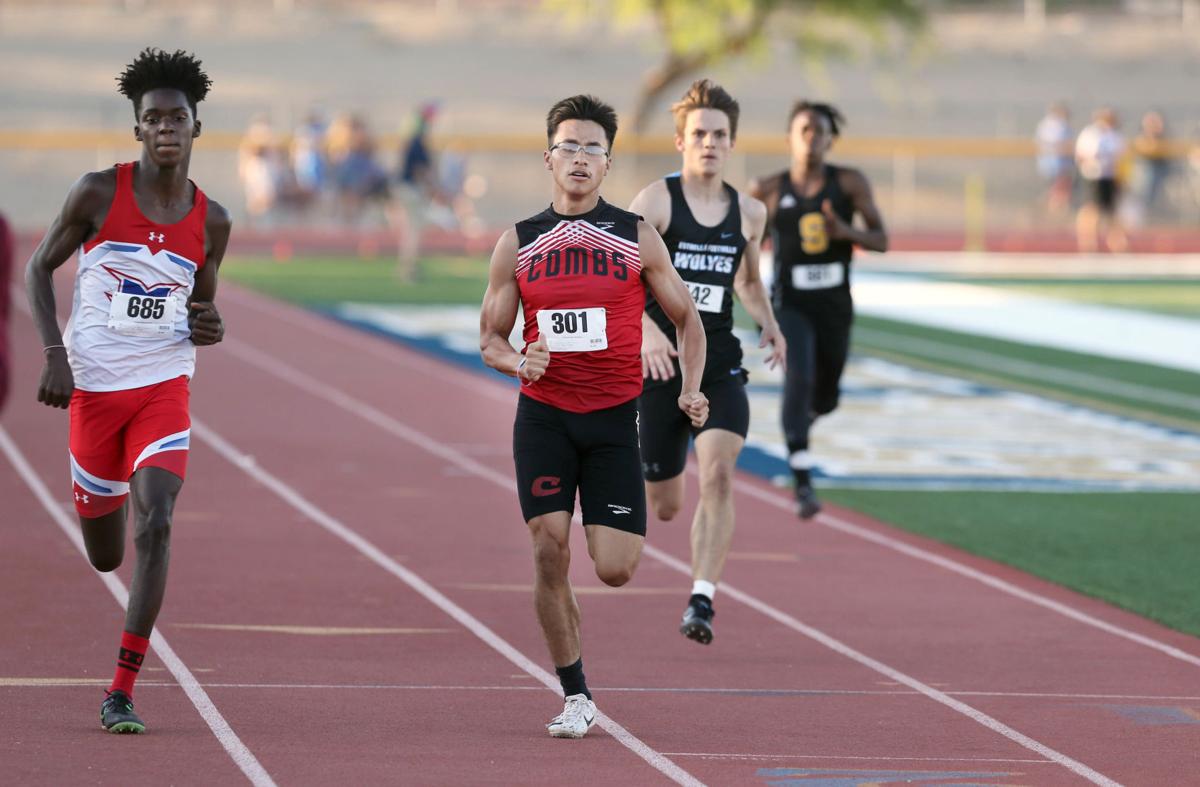 Chris Diaz, second from left, of Combs competes in the 400 meters during the Division III state track meet Friday at Desert Vista High School in Phoenix. 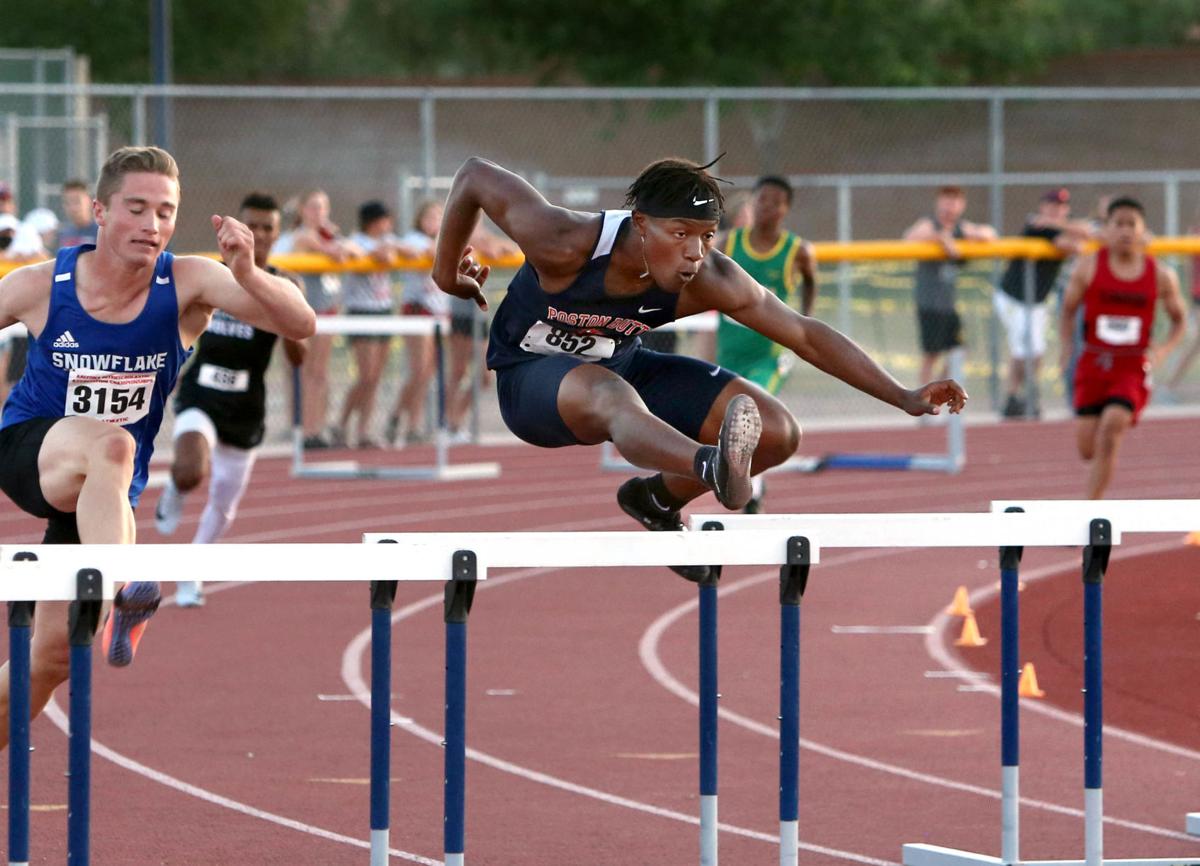 Octavious Joe, right, of Poston Butte competes in the 300-meter hurdles during the Division III state track meet May 14 at Desert Vista High School in Phoenix.

Chris Diaz, second from left, of Combs competes in the 400 meters during the Division III state track meet Friday at Desert Vista High School in Phoenix.

Octavious Joe, right, of Poston Butte competes in the 300-meter hurdles during the Division III state track meet May 14 at Desert Vista High School in Phoenix.

Taniela “Bubba” Taunima had already won a state championship in wrestling this year. He added to his state title resume at the state track meet, and his Combs teammate was right behind him.

Taunima, a senior, won the state championship in the shot put at the Division III state meet Friday at Desert Vista High School. His winning throw went 52 feet, 4 inches, and he left no doubt with a clear and convincing victory.

“It feels good because this is my senior year, so I just wanted to do the best I could,” Taunima said, smiling. “The fact that I could actually execute makes me feel really good.”

OK, so it isn’t technically summer yet. But with Taunima being named all-region in football in the fall, winning a state championship in wrestling in the winter and now a state title in shot put in the spring, it’s the Summer of Bubba because the next season is simply preordained to be his.

And he still has the state finals in the discus Saturday, where he should finish in the top five, if not higher.

But that’s not all for Combs, as junior Brodee Tucker shocked the field by taking second place in the shot put. Coming into the state meet, he had the eighth-best throw in the state.

Tucker blew past the results he was putting up early in the season to take the second-place medal, and he admitted that he surprised himself with his performance.

To illustrate the point, Tucker did not reach 40 feet in either of his first two meets of the season. On April 30, he threw 45-4.5, and he eclipsed 47 feet Friday.

“This week in practice, I had a big jump [as well as] a couple weeks ago,” he said. “Just the adrenaline of state and everything [led to] a great throw.”

He was also glad to share his accomplishment with Taunima and bring home two medals for the Coyotes.

“Me and Bubba being able to sweep, especially at a small school like Combs ... it feels good,” said Tucker, who added his goal is to follow Taunima as a state champ in the shot put next season.

San Tan Valley wasn’t done representing for the day. Poston Butte’s Amari Gilmore, a star defensive back in football, did his own damage in the long jump. He set a personal record with a jump of 21-8, taking third place. He was barely edged out for second place by 3/4 of an inch.

Gilmore, who moved to San Tan Valley from Chicago last summer, had never competed in the long jump before this season.

“I feel like I did great today because I got a PR,” he said. “All my jumps in the past couple weeks I’ve been [setting PRs].”

Gilmore’s best jump of the day came on his second attempt. He then went off to race in the 4X100 meter relay prelims, helped his team qualify for the finals in that event, then came back to complete his third jump.

“I was pretty new to long jump and coach (Scott) Busby, he got me into it,” Gilmore said. “So I’ll be doing that until my senior year.” Asked about his goals for next season, he said, “Definitely a 22-5. I have to get it. And a state title.”