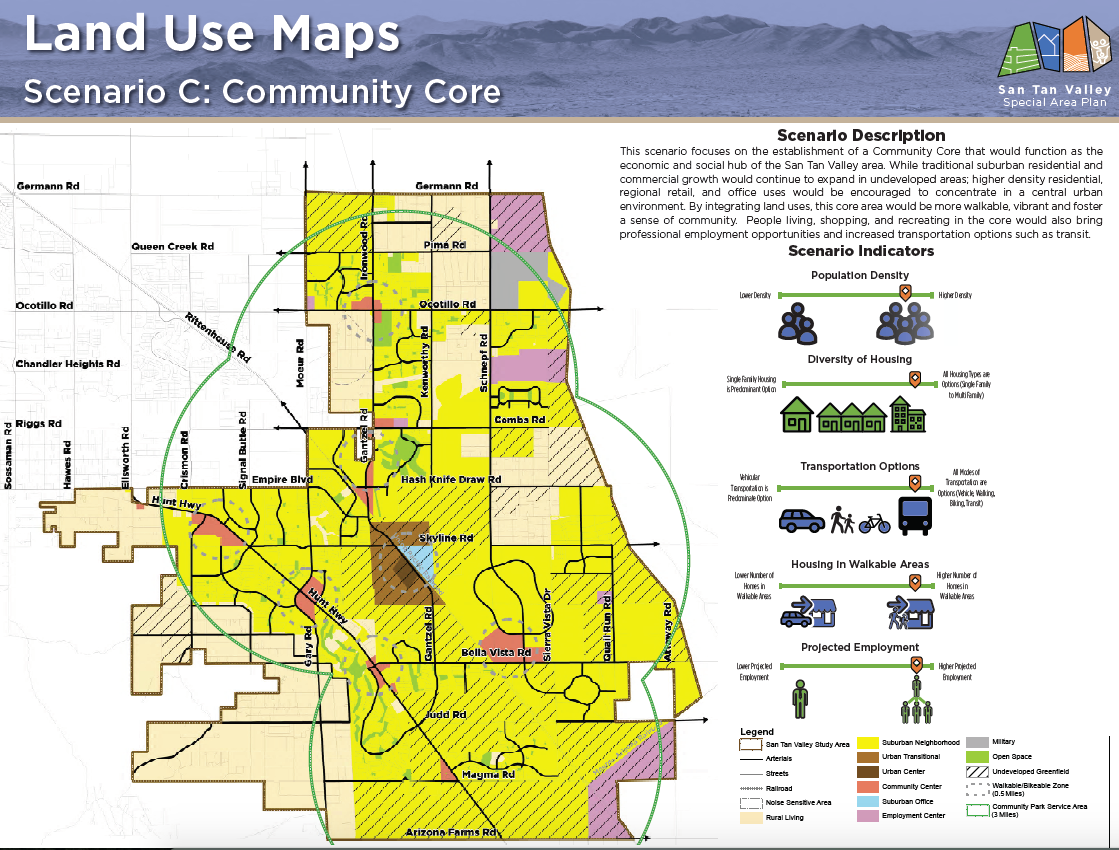 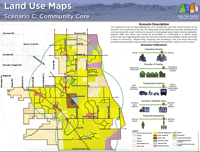 Here is a potential map for plan C, focusing on an urban center. 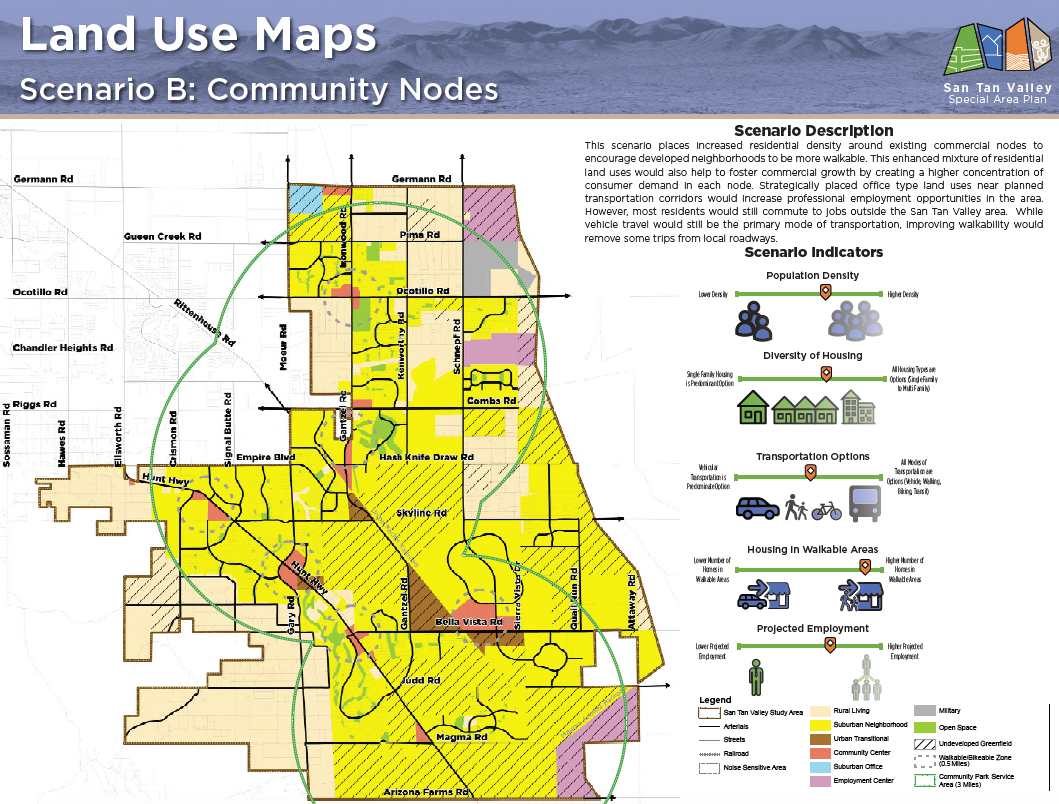 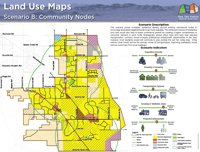 The proposed plan for scenario B, which is based on community nodes. 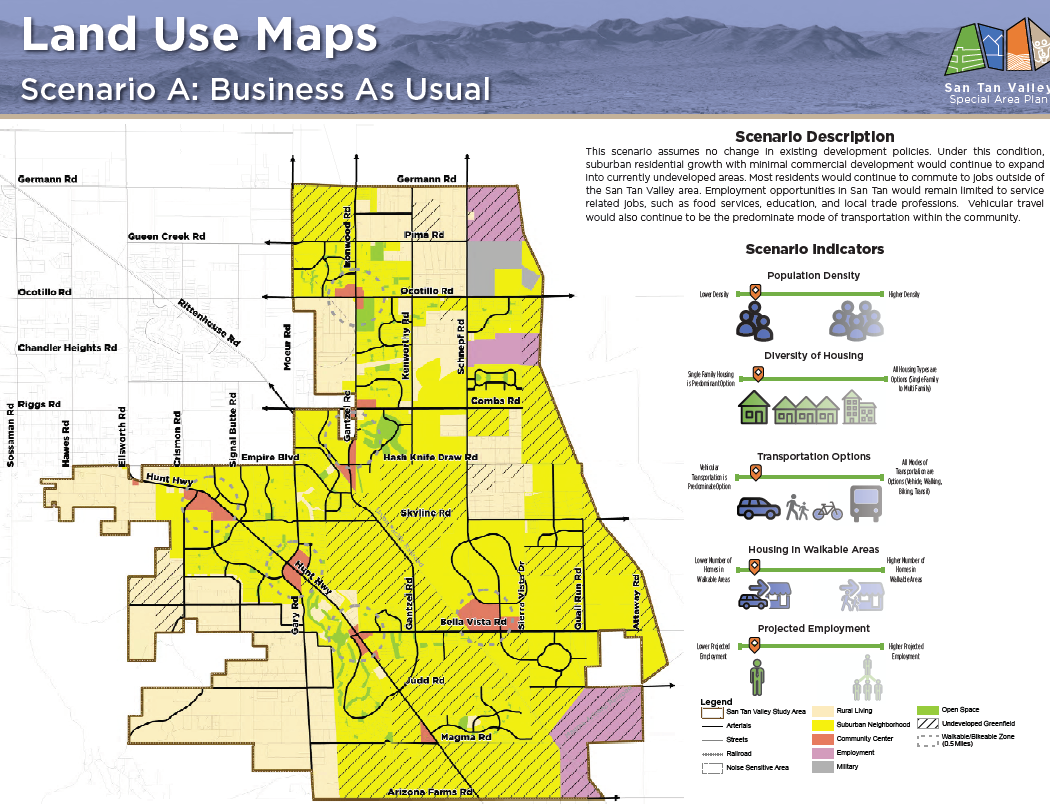 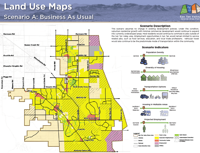 A potential future of San Tan if the status quo remains, scenario A. 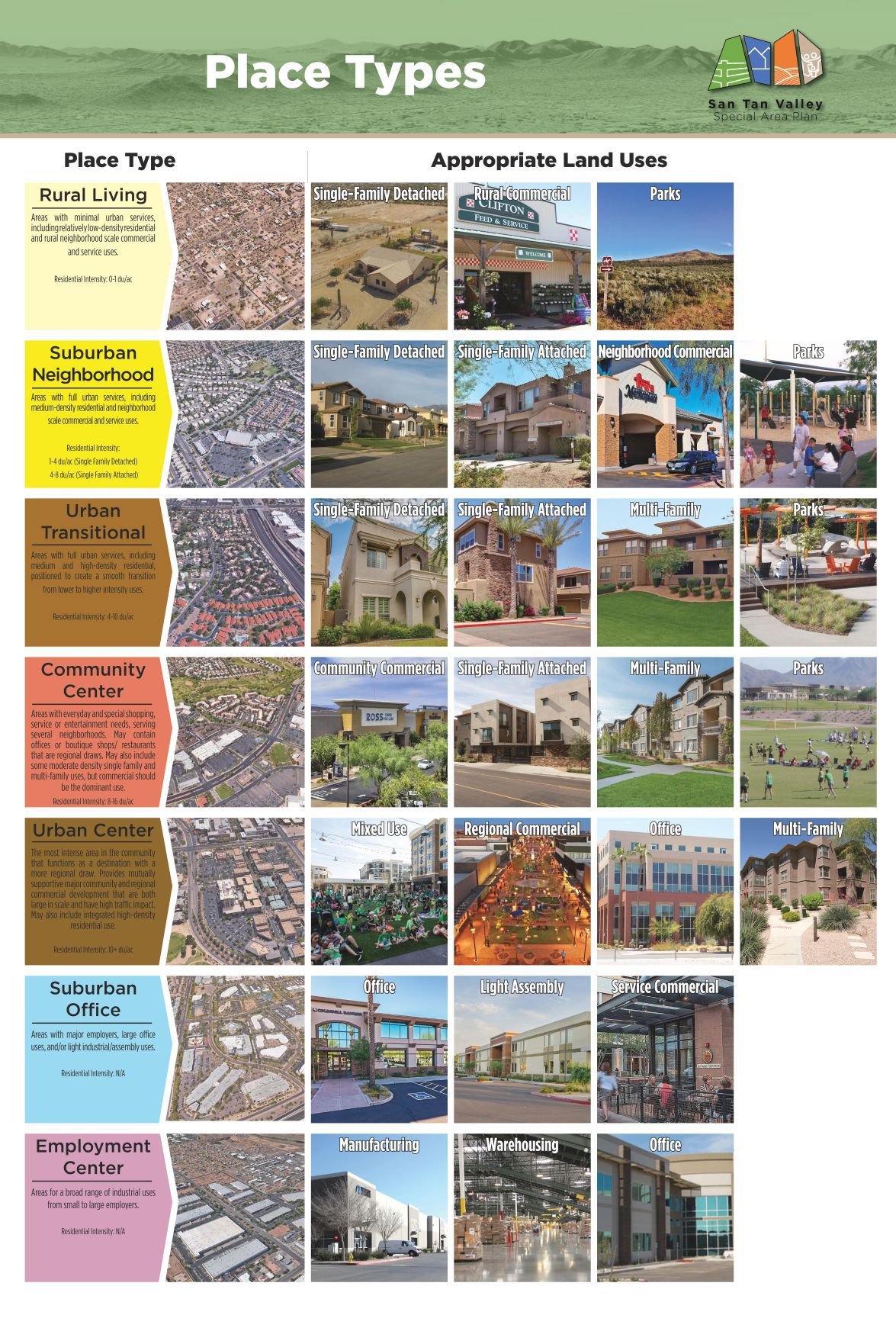 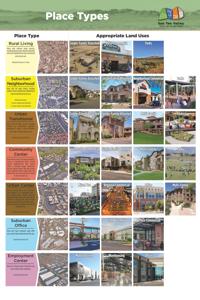 These are the categories used to make the special area plan. Here you can see what the shaded areas on the scenario maps mean.

Here is a potential map for plan C, focusing on an urban center.

The proposed plan for scenario B, which is based on community nodes.

A potential future of San Tan if the status quo remains, scenario A.

These are the categories used to make the special area plan. Here you can see what the shaded areas on the scenario maps mean.

The county presented three hypothetical plans for San Tan Valley and asked for comment on each. The selected plan will be revised based on feedback and eventually adopted by the county Board of Supervisors.

Citizens raised concerns that incorporation would render this plan null, but Community Planning Practice Lead Matthew Klyszeiko, who presented at the meeting, assured the audience that the plan would still hold if San Tan Valley becomes a city.

“This would most likely be used as the framework for that incorporated community,” Klyszeiko said.

Klyszeiko encouraged those present to put feedback on sticky notes for each plan.

“These plans are only as good as the feedback we get,” Klyszeiko said.

Plan A is the status quo, with no change to current development policies. San Tan Valley would then likely continue with primarily suburban residential growth of single-family housing and minimal commercial development. New types of employment opportunities would not come to the area and most residents would continue to commute by car.

Plan B, called “community nodes” by the county, would see residential density increase in existing commercial hot spots. This would help encourage the development of more walkable neighborhoods and increase consumer demand in commercial areas, helping them to flourish.

This plan also includes areas set aside for offices to bring some more employment to San Tan Valley, but most residents would still commute, with personal vehicles still being the primary mode of transportation.

Plan C would allow for a high-density housing and commercial center in San Tan Valley while allowing traditional suburban and commercial centers to develop elsewhere. The proposed urban center shown on the map is between Bella Vista Road and Skyline Road, with Gantzel Road and the Union Pacific Railroad cutting through the center.

This plan also claims that it would foster greater transportation options such as buses, bikes and walkable areas. It also aims to bring greater employment opportunities, as can be seen in the various sections of the map shaded off as planned for “employment centers.”

The plans use various categories, such as urban center, employment center, suburban office, suburban neighborhood and rural living to color code the special area plan maps. The final map will be used as a guide for the Planning and Zoning Commission when making future decisions.

The preferred plan will be released in early 2018 when another round of public comment meetings will be held.

“The preferred plan will most likely be a hybrid of all three. People like the central community core, having a central gathering place,” Klyszeiko said. “People also liked the nodes element because it helped disperse some of the traffic.”

The plan would then be subject to public hearings and would come before the Board of Supervisors by December. Once adopted, some changes could still be made to the plan as needed by the Planning and Zoning Commission in the course of working with developers.

SAN TAN VALLEY — The cost of turning San Tan Valley into a city has become more clear, but there is still plenty of information left to get a …

SAN TAN VALLEY — The incorporation effort, in its current form, is over in San Tan Valley.