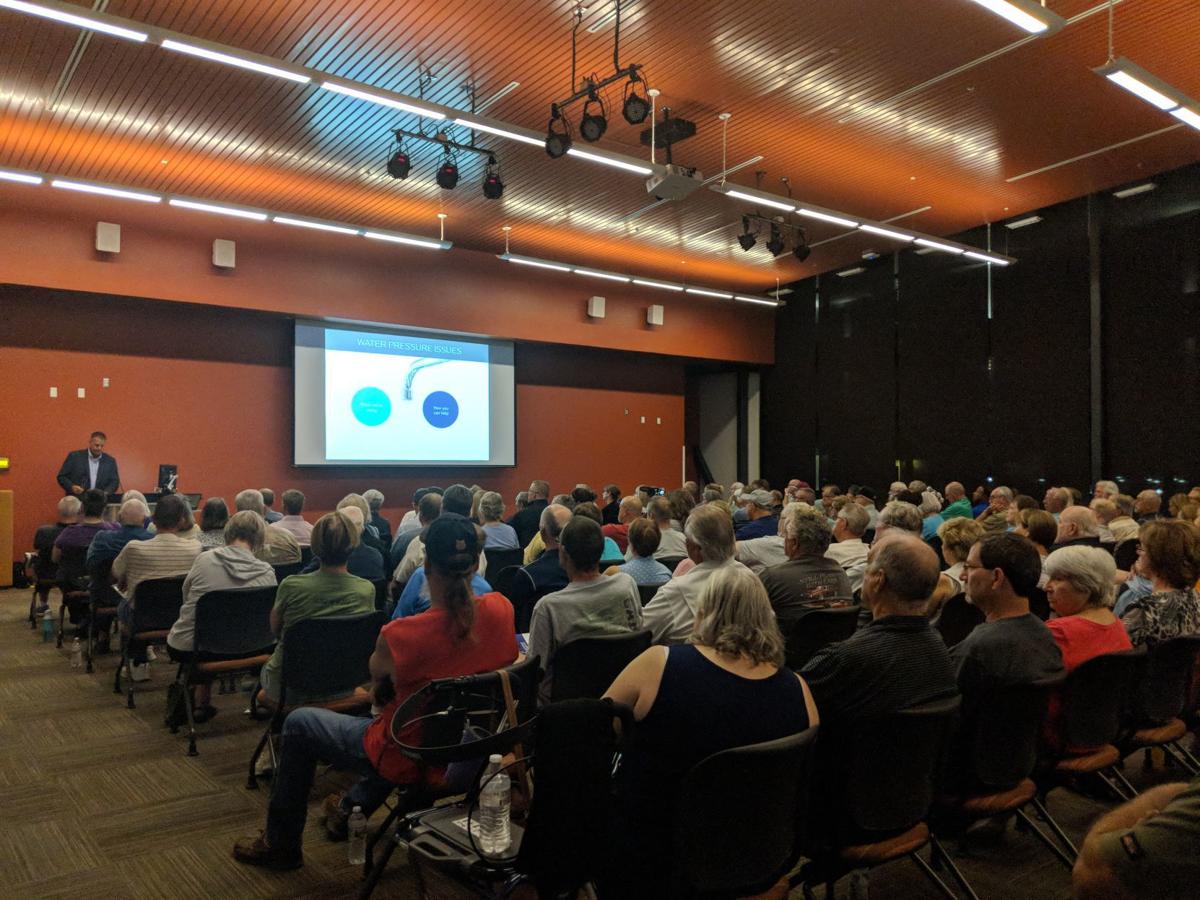 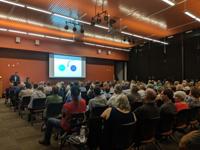 Dozens of people listen to an update on Johnson Utilities’ water and wastewater service Thursday in San Tan Valley. 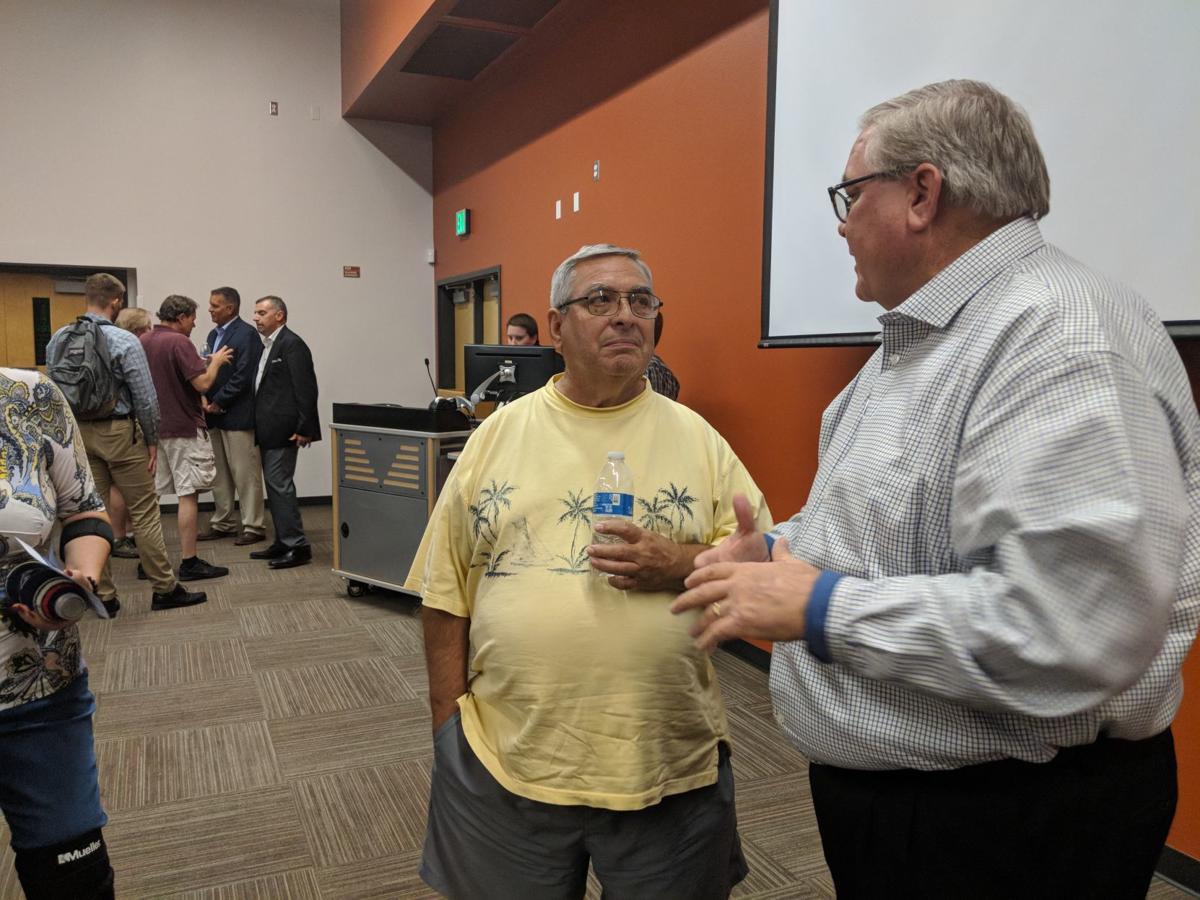 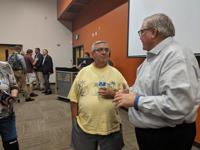 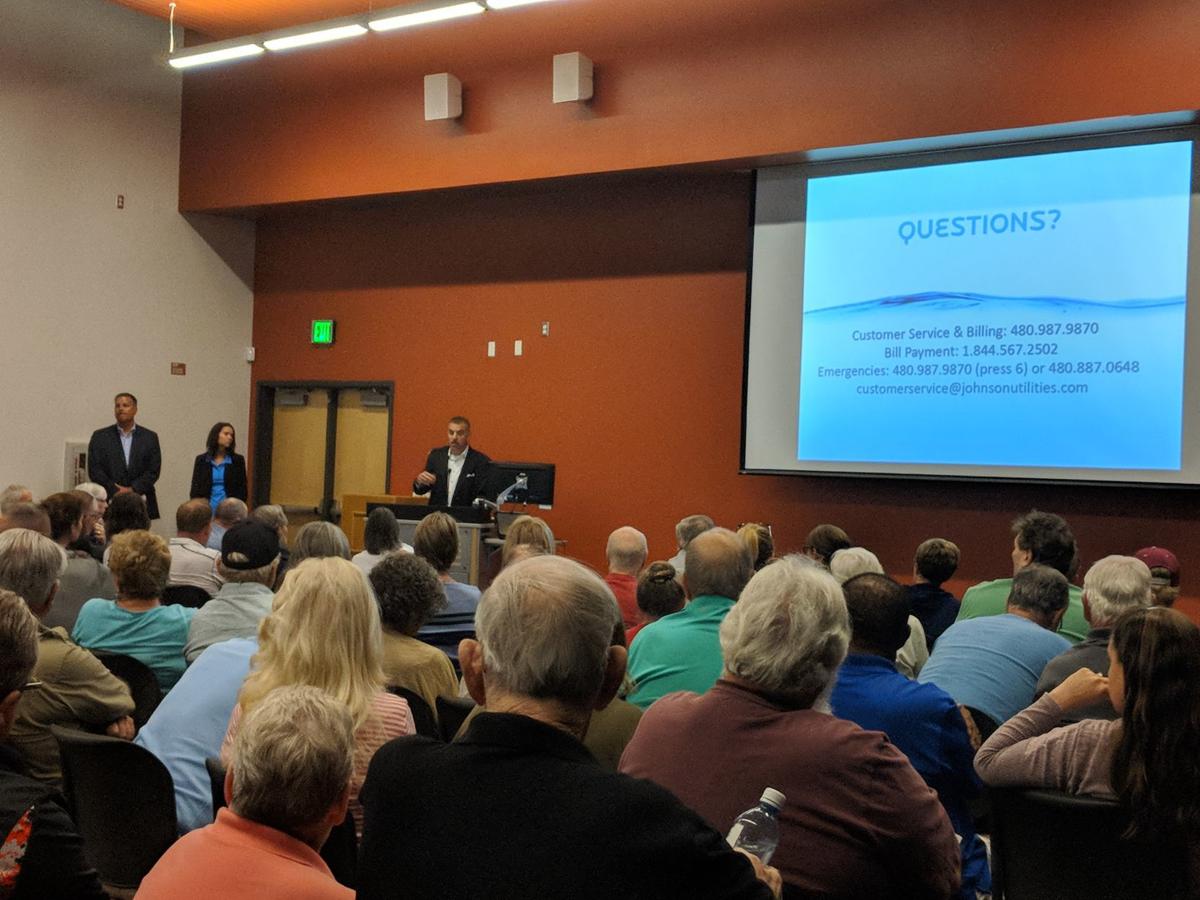 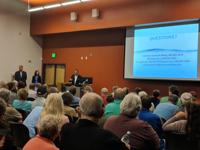 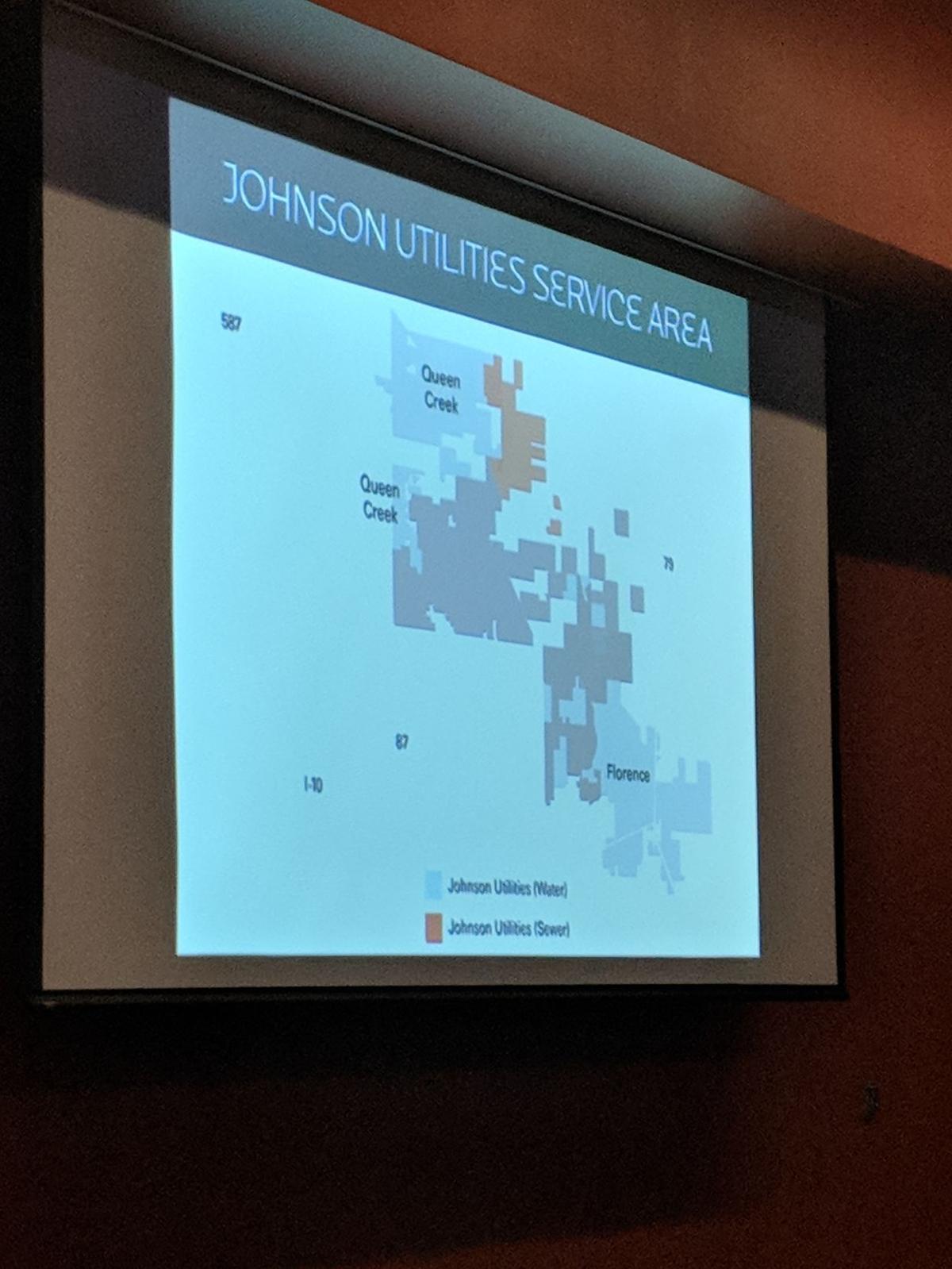 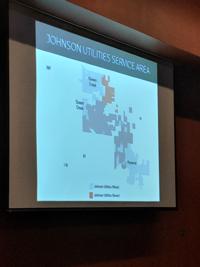 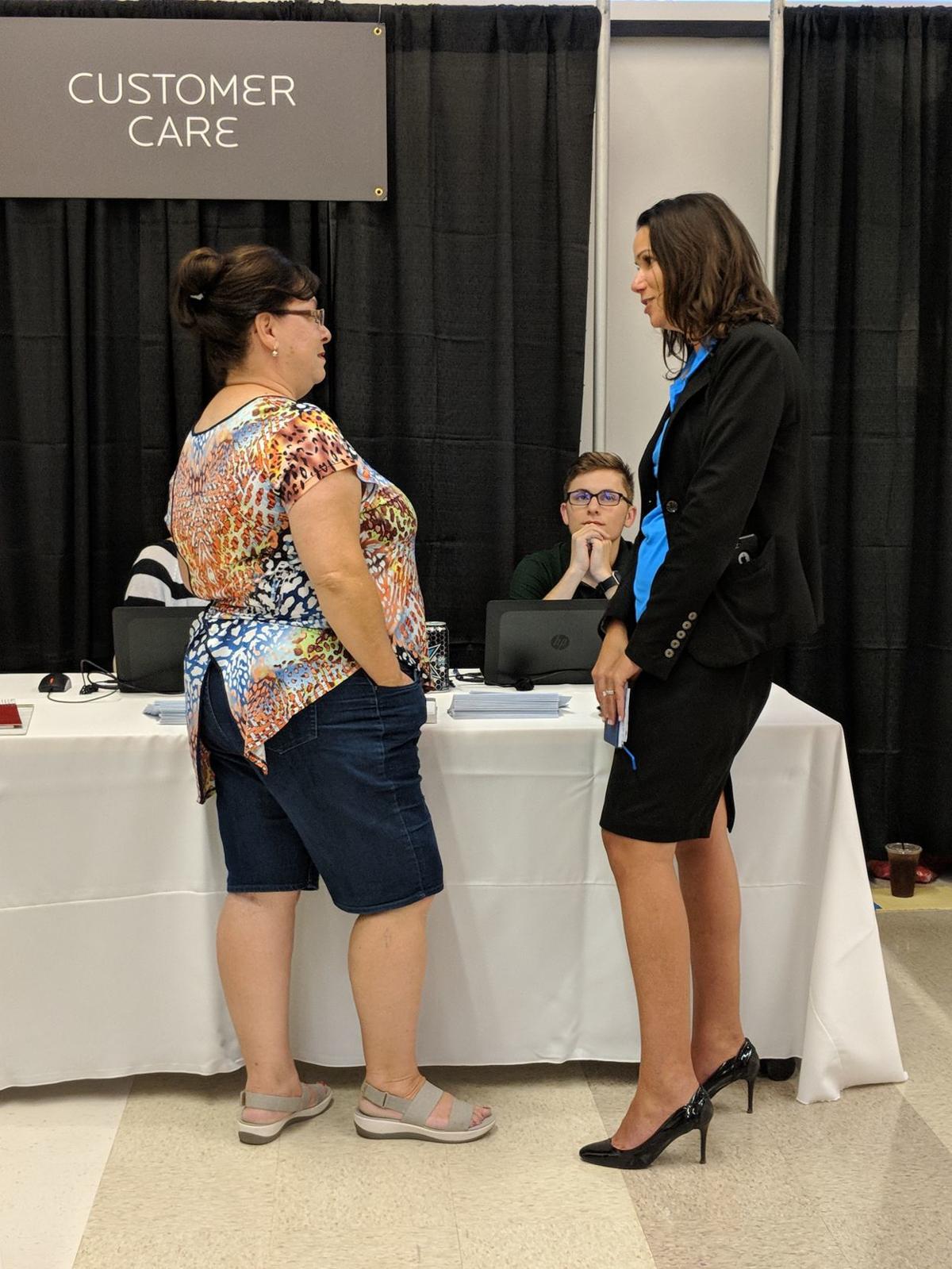 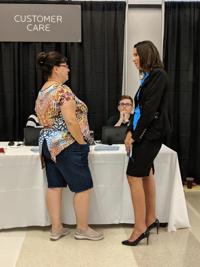 Dozens of people listen to an update on Johnson Utilities’ water and wastewater service Thursday in San Tan Valley.

SAN TAN VALLEY — Anger, frustration and a little praise were evident at a public meeting for customers of a utility company that’s been plagued with problems.

Dozens of people came to the public meeting Thursday for an update on Johnson Utilities, the water and sewer company that services the San Tan Valley area and has been the subject of complaints and violations. Officials from EPCOR Water, a Canadian company that services several parts of Arizona with water service, listened to residents of San Tan Valley and Florence who voiced their concerns with Johnson Utilities’ past and current water and sewer services.

EPCOR held the open house and Q&A to brief residents on what was happening with Johnson Utilities now that the Arizona Corporation Commission has put EPCOR in charge of assets and management. But to some residents, the needed change was too little, too late.

A woman who said she lives in Oasis Magic Ranch said she was unable to enjoy her home and neighborhood because the stench of the Johnson facilities made it unbearable to be outside.

Aside from her property being malodorous, she said there is a significant bug problem, which is coupled with low water pressure and water that’s undrinkable without being heavily filtered.

“You don’t understand how much it affects us,” she said.

Shawn Bradford, vice president of corporate services for EPCOR, said the company was working as quickly as it could to identify problems with the Johnson infrastructure and was looking to correct deficiencies, but none of the fixes was going to be quick or easy.

“We’re asking for your patience,” he told the standing-room-only crowd at the Central Arizona College campus in San Tan Valley. “We’re committed to fixing the problem, but some things are going to take longer than others.”

But some residents questioned how the county, state, and utility and environmental regulators allowed the problem to get so out of hand, with water that’s undrinkable and sewage that runs down streets. To those questions, Bradford had no answers, only sympathy for their plight.

“Our job now is to make the improvements for safe service,” he said.

However, problems continue to plague the utility, with a sewage spillover reported at Hunt Highway on Tuesday after a contractor hit a sewer main.

Earlier Thursday, Troy Day, another vice president at EPCOR, told the Arizona Corporation Commission there would be a significant cost to make all of the necessary repairs to the Johnson infrastructure, to the tune of about $170 million.

EPCOR was appointed interim manager for Johnson Utilities in August after the ACC determined the problems with the management of Johnson Utilities were significant enough to warrant temporary takeover. Bradford told the assembled masses that EPCOR has signed a three-year contract as the interim manager, but what happens after those three years was anyone’s guess. EPCOR’s monthly fee for management services is being paid by Johnson Utilities, he confirmed, resulting in applause from the audience.

In addition to evaluating the infrastructure, EPCOR has done a complete analysis of Johnson’s customer service and billing processes, said Sarah Mahler Skaggs, customer care director for EPCOR. And while some customers complained Thursday night their bills were too high — one woman said the fees were unaffordable on fixed incomes — Skaggs assured them they were being charged the correct rates.

“It’s because of Mike Goodman that we’re here,” said Karen Mooney, a resident of San Tan Heights. “He got people to pay attention.”

But Goodman downplayed his role to PinalCentral, noting that four of the five county supervisors attended the meeting and are listening to the concerns of the citizens.

“Bottom line: We have the attention of the other supervisors. They came to listen and to hear what’s going on,” Goodman said.

“It’s going to take a combined effort between the county, the citizens, the utility and the developers,” he said.

The ACC on Thursday voted to put a 96-hour hold on issuing any further meters for water or wastewater service in the Johnson Utilities service area. The commission will meet Monday afternoon to discuss in more detail whether to put a longer moratorium on utility hookups. The effect would be devastating to homebuilders, the commission heard Thursday.

The ACC meeting will be on Monday at 2 p.m. in Phoenix.

SAN TAN VALLEY — Despite expressing their frustrations over language in a potential agreement with a utility company and home builders, the Ar…

FLORENCE — Recognizing the importance of San Tan Valley’s economic impact to the county, the Pinal County Board of Supervisors on Wednesday vo…

Johnson hearing pushed back; stay on hookups remains in place

SAN TAN VALLEY — The question of new water and wastewater hookups for Johnson Utilities in Pinal County will have to wait a little longer.

SAN TAN VALLEY — An agreement has been reached between a utility provider and homebuilders and sellers on new utility hookups.

FLORENCE — The FBI recently inquired into facts related to the town of Florence’s interest in buying Johnson Utilities several years ago, acco…