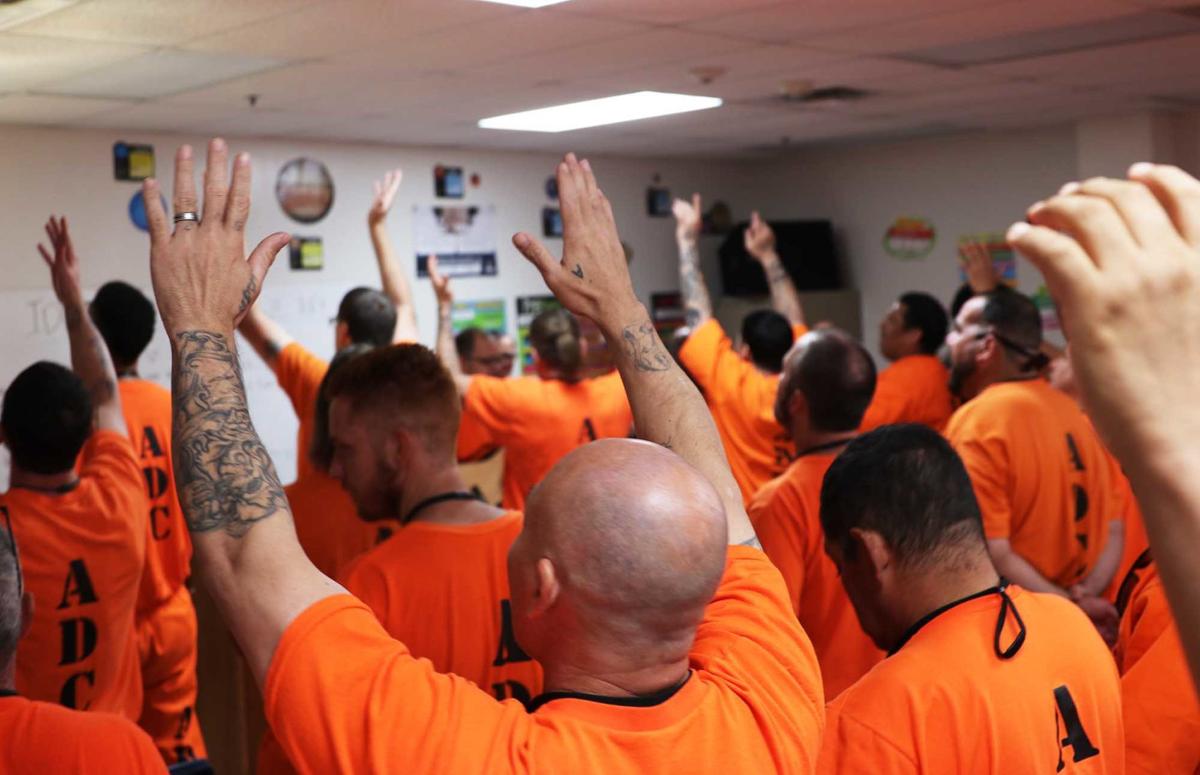 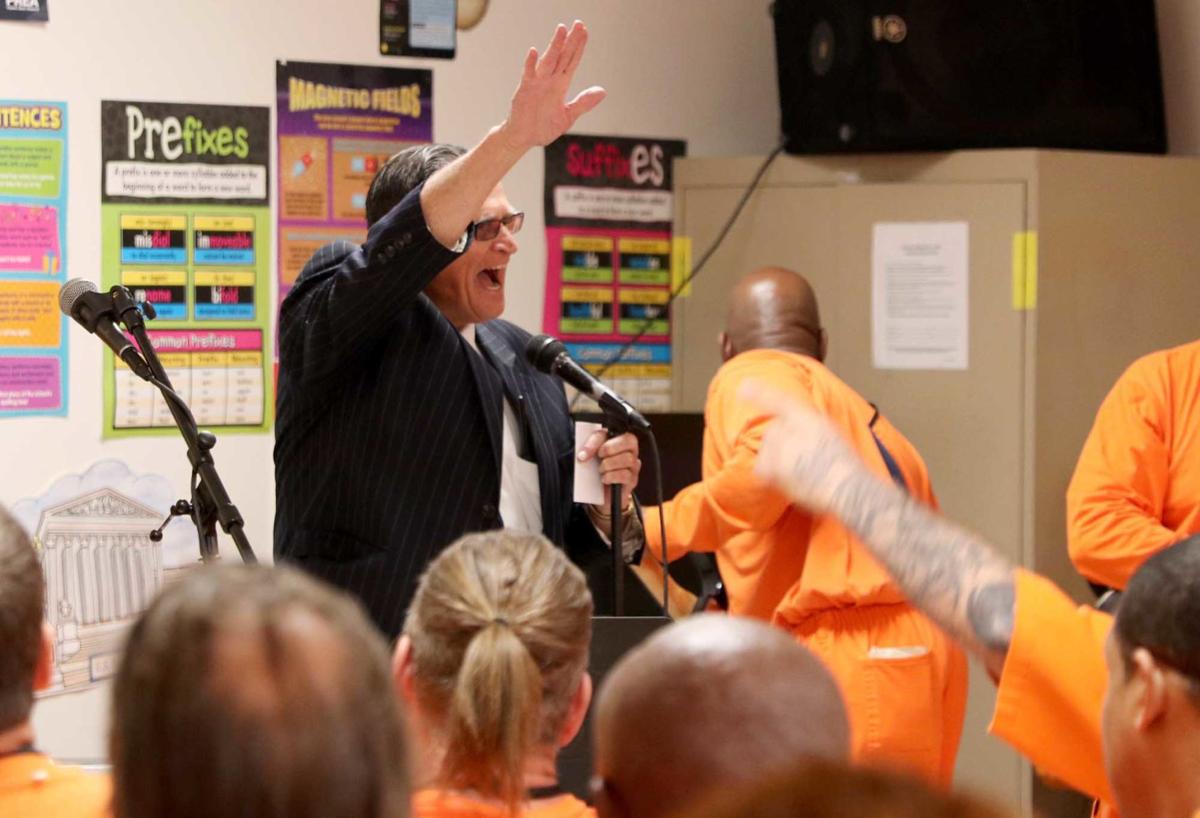 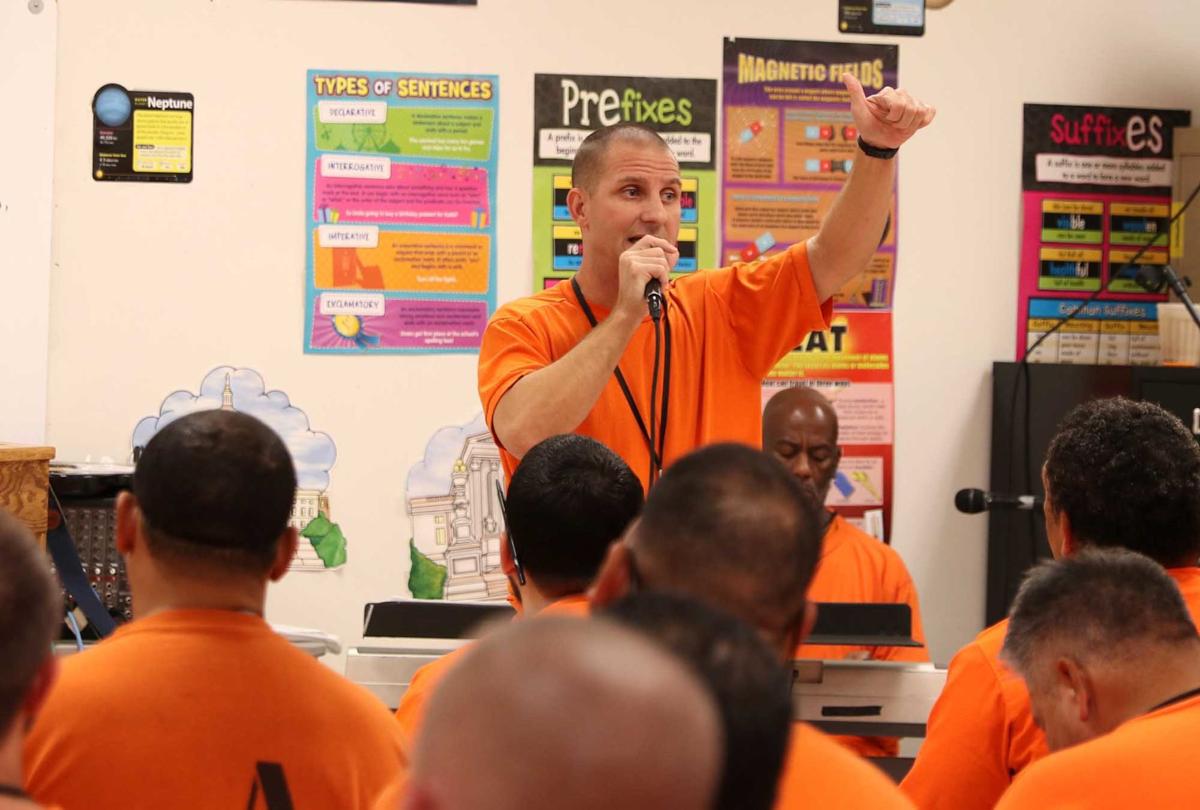 Red Rock Correctional Center inmate Joshua Johnson is one of the head mentors for the worship service and Bible study at the prison. 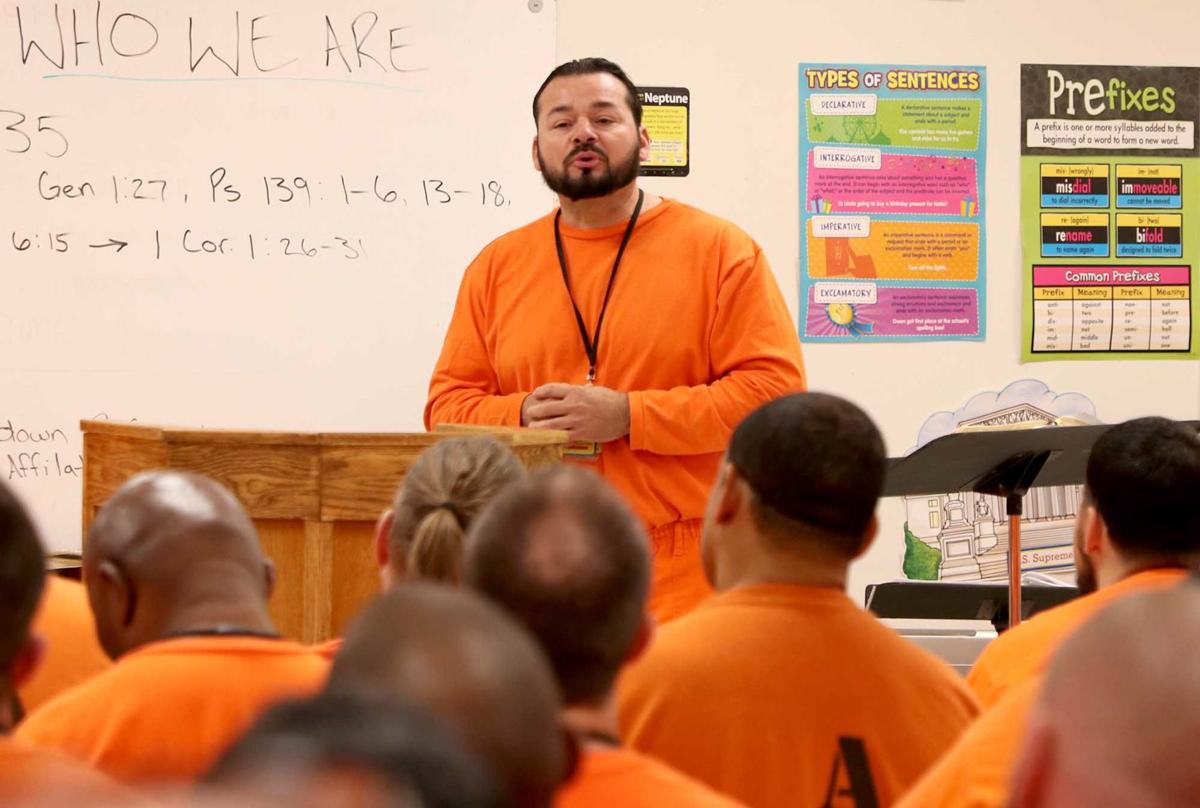 Red Rock Correctional Center inmate Alejandro Cano-Garcia is one of the head mentors at the worship service and Bible study at the prison.

Red Rock Correctional Center inmate Joshua Johnson is one of the head mentors for the worship service and Bible study at the prison.

Red Rock Correctional Center inmate Alejandro Cano-Garcia is one of the head mentors at the worship service and Bible study at the prison.

Some worshippers stand, arms raised above their heads as they sing along with the band. Others kneel in prayer.

When the preacher begins, he delivers a fiery know-yourself-theme sermon, challenging attendees to set aside sins and shame of the past.

While it looks and sounds like any worship service at any church, the Saturday afternoon service is part of a suite of peer-led leadership programs at Red Rock Correctional Center that fall under the facility’s Go Further initiative, an effort to reduce recidivism by equipping inmates with the life skills, education and confidence they need to be successful once they’re released.

Through the leadership program, inmates help other inmates by teaching classes, counseling and tutoring one another. On Saturday afternoons, the inmates lead a Bible-based worship service. Some inmates preach, others prepare scripture references and some perform in the house worship band.

“We know we’re in prison, but we don’t call Red Rock a prison. We call it Red Rock Academy because it’s teaching us to be better men and leaders,” said Joshua Johnson, 42, who is currently serving time for aggravated assault.

He’s now a mentor to other inmates and is one of the preachers during worship service.

“Most of us are people who just made bad choices, a lot of the times due to chemical dependency. In some ways, this place saved my life. I was out there slowly killing myself with drugs,” he said.

Red Rock Correctional Center is a medium-security prison owned and operated by CoreCivic. It serves the Arizona Department of Corrections.

The facility houses 2,000 inmates, about 51% of them on their second or third prison sentence.

Participation in peer-led leadership programs can be life-changing for those involved, said the facility chaplain, Edward Thibodeaux.

“The program changes their hearts,” he said. “It gets them thinking differently.”

Participation in the inmate-led worship service has grown from a handful about a year ago to nearly 100 regular participants every Saturday afternoon.

“I can stand in here and preach all day, but when it’s one of their own preaching, it’s different,” Thibodeaux said. “They know they can’t con each other so if they’re up there preaching, they have to walk the walk. They can’t be hypocritical.”

When Alejandro Cano-Garcia preaches during the worship service, he speaks in fast Spanish, urging inmates to know their true selves by reading the Bible. Fellow inmate Federico Rodriguez translates for him.

Cano-Garcia became a Christian in prison and believes that through his current sentence, God freed him from a life of drug smuggling.

“As a kid growing up in Mexico, I basically felt I had two career options. The first was to become a soldier in the army. The second choice was to become a gunman or smuggler for the cartels. That was my mentality at the time. I realize now that having grown up in sin and ignorance, I took the wrong road,” he said.

His first arrest, he said, came at the height of his smuggling career.

“I turned to God after my first arrest, but I still had the old mentality so I was praying to God to help me sell marijuana so I could get rich and help people,” he said. “I wasn’t ready at that point to change.”

Things were different during his second arrest.

“I noticed the sheriff’s license plate had a 666 in it. At that point, I felt the devil was laughing at me,” he said. “For a long time after my arrest, I was mad. I surrendered to God and now, even though I have seven more years to go (of a 10-year sentence), life is perfect, even in this place.”

Cano-Garcia is now a favorite Saturday afternoon preacher. He hopes to eventually open orphanages and churches in Mexico.

“God is working miracles in this prison. He’s changing lives. Mine is one of them,” he said.

Inmates in the leadership program are housed together and are accountable to one another. To serve as mentors, they must apply to the program, submit an essay then undergo interviews. They also must stay out of trouble.

They go through a series of trainings, including leadership, mentoring and tutoring. They teach classes such as stress reduction and conflict resolution and help their fellow inmates prepare for a GED, literacy certificate or other educational goals.

So far this year, 111 inmates at Red Rock have earned a GED. By the end of the year, that number is expected to be more than 150. Another 252 have earned literacy certificates and 200 have attained job training certificates in electrical work, carpentry, computer science or horticulture.

The faith-based program combined with the educational, leadership and life skills training gives inmates the tools they need to be successful once they’re released, Thibodeaux said.

“I’ve seen inmates released and go out there and make something of their lives. The education gives them the training they need. Faith gives them hope,” he said.

CASA GRANDE -- For nearly 12 years, Ryan Hall had been in and out of the Arizona prison syst…

Oh, that wooden dollhouse? It was built in an Eloy prison

CASA GRANDE — About seven years ago, Maria Ascencio Godinez became a U.S. resident after she married her husband.

PHOENIX — A former guard at a private prison in Eloy claims he was shot at point-blank range with a riot-control weapon in a racist attack.