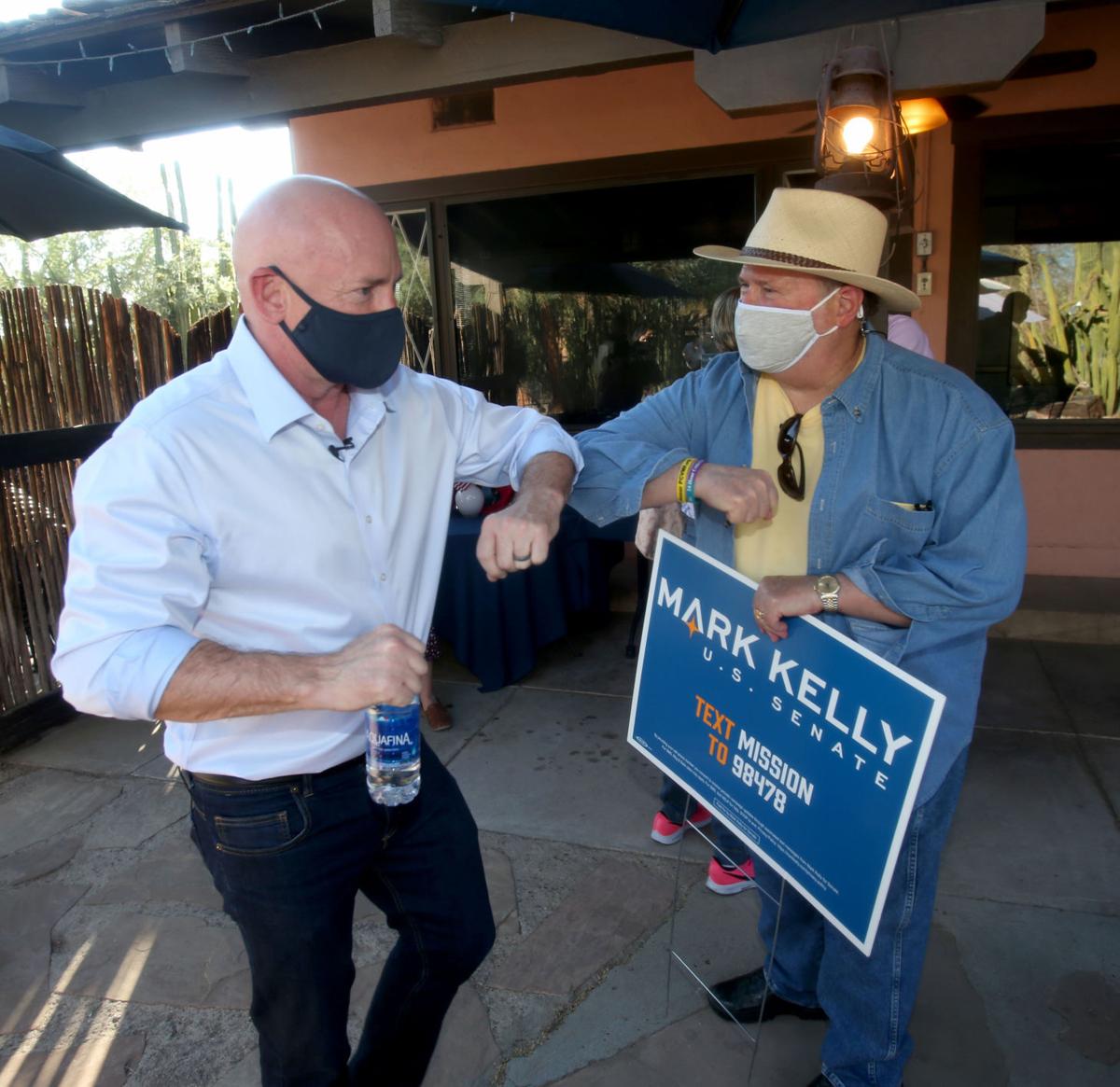 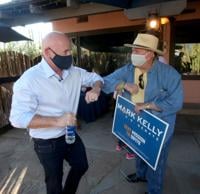 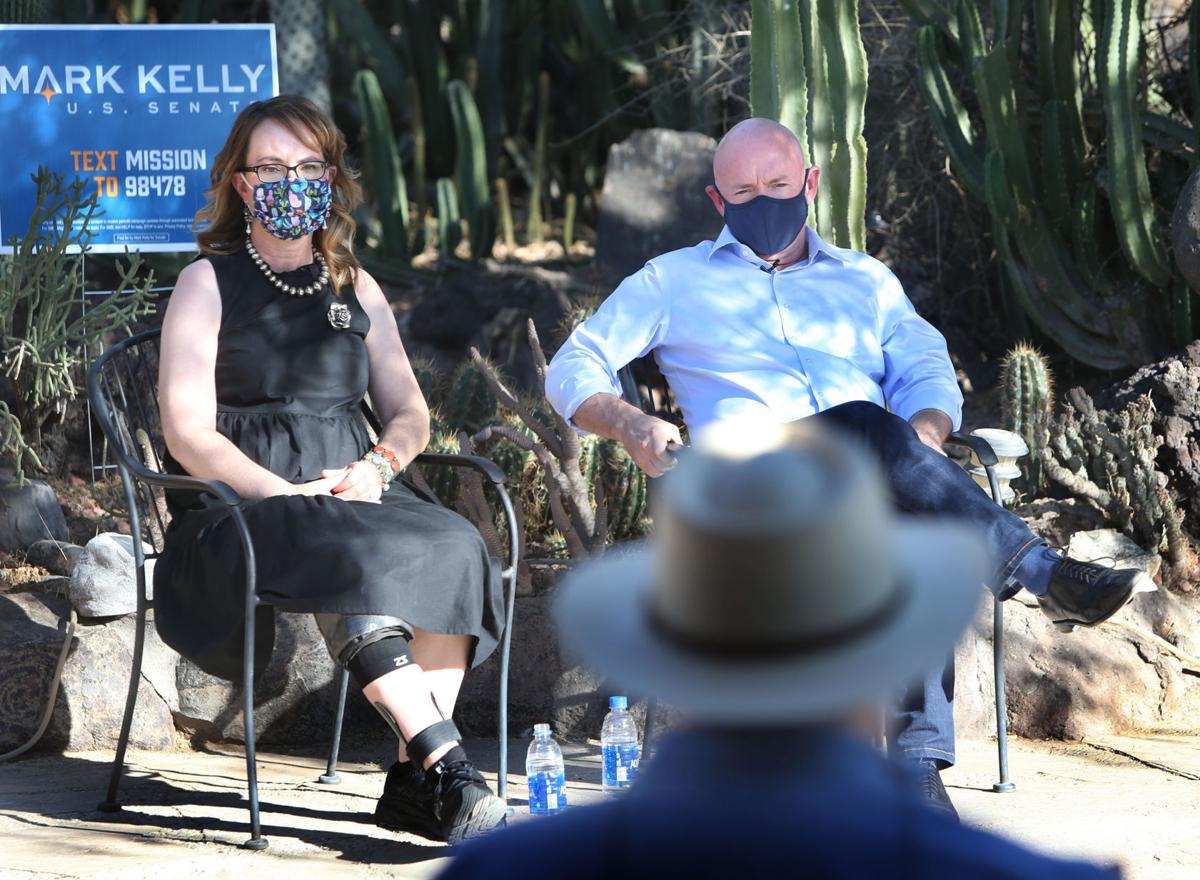 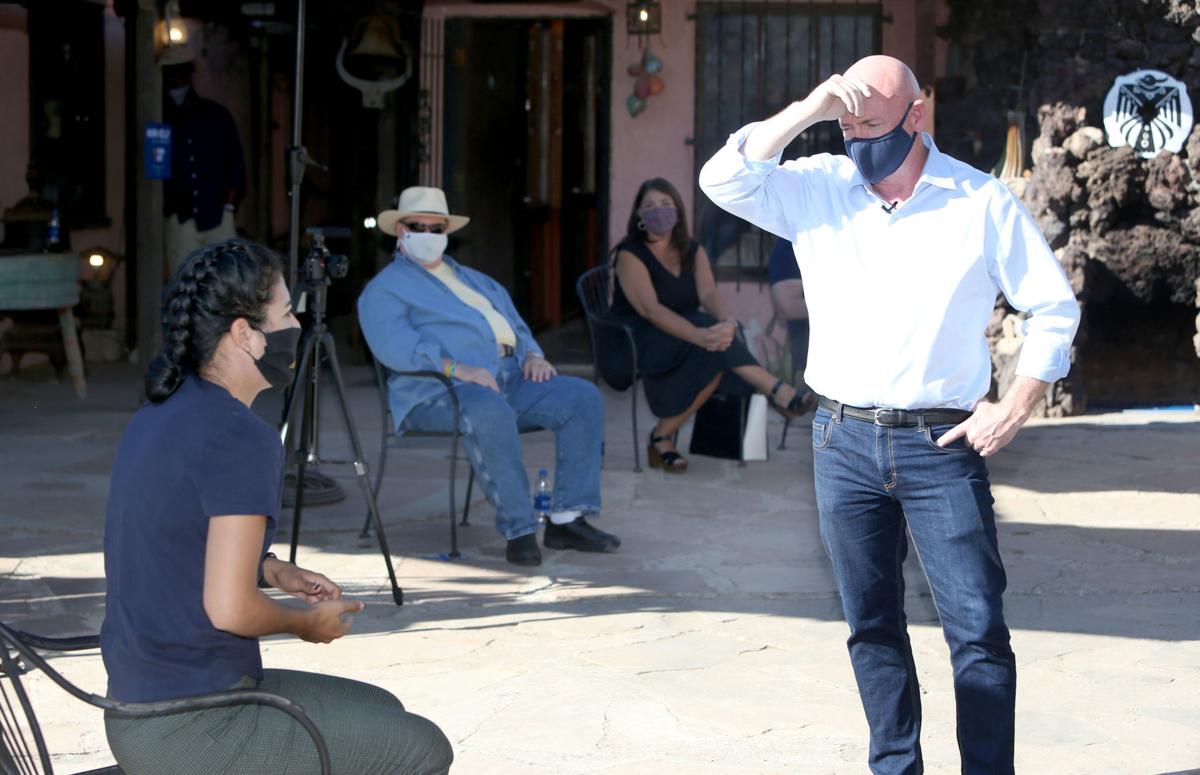 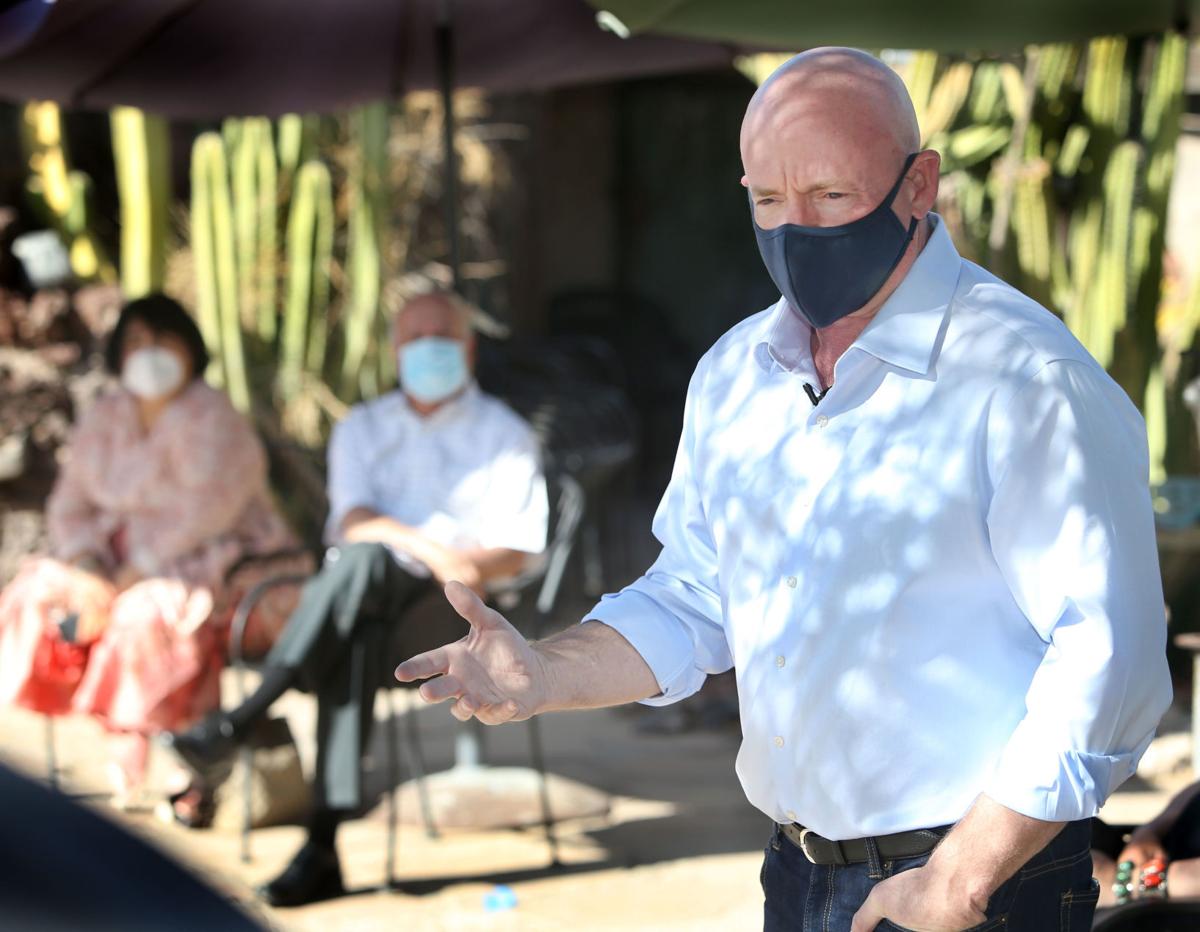 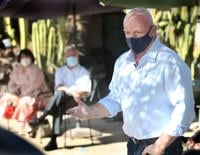 CASA GRANDE — Economic relief during the pandemic, water supply concerns, bridging the digital divide in schools and other issues were the topics of choice during a roundtable discussion with U.S. Senate candidate Mark Kelly and a group of local leaders Sunday afternoon in Casa Grande.

“This election is so important for our country,” Giffords told the small group, which was all wearing masks and spread out across the patio of BeDillion’s Restaurant. She pointed out her husband’s focus on science and facts in making his decisions and some of the impacts of the coronavirus pandemic before turning the floor over to Kelly.

Kelly gave a brief description of his background as a U.S. Navy captain, engineer and astronaut and why he was running for office.

“I made the decision to run because I believe the trajectory that the country is on is unsustainable,” he said.

The state needs a senator who will represent the residents and their wishes and will also be willing to work across the aisle, Kelly said.

The pandemic has shown that there is a “crisis of leadership” in Washington, D.C., Kelly said. The federal government has been a step behind in responding to the pandemic. Because there was no plan on how to respond to a pandemic, the federal government was slow to respond to the need for personal protective equipment, testing, contact tracing and economic aid to businesses and unemployment benefits to workers and it’s still struggling to do so, he said.

Kelly also talked about the need to protect people who have pre-existing conditions from possible changes in health insurance and to tackle the problem of the rising cost of health care for everyone.

Climate change was also of great concern to him. He pointed out that the number of days with temperatures over 100 degrees in Phoenix continues to increase.

“As a country, we’re really good at solving problems,” he said. “We just have to decide to do it and not make it into a political fight.”

Judee Jackson asked Kelly about his plans for helping early education. She pointed out that Pinal County and the state have a long way to go in providing quality early learning and continuing that education quality through high school and into a community college or university.

She also asked if he would help schools get the funding and help they need to cover some of the shortages in technology, personal protective equipment and other needs that schools had discovered during the pandemic.

Jackson said schools still need help with the security and safety of their buildings, even though many were teaching students at home via the internet and the need to support the National School Breakfast and Lunch Program.

Kelly pointed out how important early education, before a child reaches kindergarten, is.

“There are so many career fields with openings,” he said. Those openings are there because the United States has not done a good job of encouraging early learning and getting students interested in the variety of career choices that are out there.

It is important for the federal government to address the digital divide and the need for rural broadband internet access to make sure that students and adults have access to the tools they need to succeed, he said.

Snider asked what Kelly could do about the need for more water in Pinal County and the state and effects of climate change on both water and wildfires.

Kelly pointed out that the state gets about 39% of its water from the Colorado River and that the current drought is shifting the state closer to the first stage of water reductions from the Drought Contingency Plan that was approved by the Lower Basin States in 2019.

That first level of reductions will reduce Arizona’s share of Colorado River water by about 18%, he reminded the group. That deficit will probably be covered by increasing the amount of groundwater that is being pumped.

Pinal County is in a particularly challenging position if the DCP reduction goes into effect because the largest share of the cut in water will go to agricultural users in the county, Kelly said.

The states also have to take into account the impact of climate change, he said. There needs to be a long-term solution. Everyone, the federal, state, local and tribal governments, agriculture, businesses and residents, have to get together to create a long-term national strategy to tackle the issue.

She also asked about federal aid for infrastructure projects, such as the widening of Interstate 10, and rural broadband.

“This is just an indication of how broken D.C. is,” Kelly said, referring to the number of COVID-19 relief bills that have stalled in Congress over the last several months.

He said he has heard several stories during his campaign for office from business people who were able to successfully get PPP funding, but he also heard several stories from people who tried to access the program but were unable to do so. Sometimes because they didn’t have the help they needed to fill out the application and sometimes because they didn’t have a strong enough internet signal to fill out the application before being disconnected and having to start the process over again, he said.

The Paycheck Protection Program was designed to give small business owners a forgivable loan to cover the cost of payroll for their employees while their businesses were closed due to the pandemic in order to avoid pushing employees on to unemployment rolls. The program was so popular that the first round of funding ran out before many small businesses could get an application in. It also had problems with its application process and some of the money went to larger corporations that were not supposed to be eligible for the program.

“We need an economic recovery package that points the country in the right direction and fast,” Kelly said.

“We need to get folks into office that are willing to go for common ground. Partisanship is not going to help solve our problems. These aren’t easy problems to fix,” he said, referring to each of the issues brought up during the discussion. “There is not one party that can fix all of them alone, but if (the two parties, Republican and Democrat) work together we can.”

Kelly did not comment on President Donald Trump’s choice to fill the seat but said that he thought that Congress should have waited until after the election to start the process to fill the seat. Filling a seat on the Supreme Court has always been taken by Congress as a serious situation, he said. And it should continue to be taken seriously regardless of who wins the presidency in November’s election.

Kelly also said that if the Supreme Court overturned the Affordable Care Act, he would be willing to work with others in Congress to help protect those with pre-existing conditions.

If elected to office, Kelly said some of the first issues he would like to tackle are getting additional pandemic relief out into the economy and making sure that federal agencies, like the Food and Drug Administration, have the funding they need to develop and distribute a vaccine to the public.