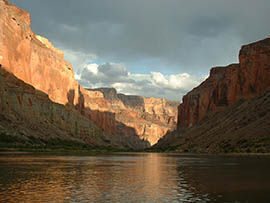 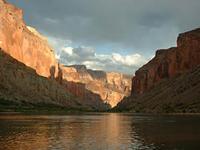 Grand Canyon National Park is part of the Great American Outdoors Act that has been approved by the House and Senate.

Grand Canyon National Park is part of the Great American Outdoors Act that has been approved by the House and Senate.

Arizona District 1 Congressman Tom O’Halleran co-sponsored the Great American Outdoors Act and hailed its passage by a 310 to 107 vote in the House. O’Halleran’s a Democrat whose district includes much of Pinal County.

The Great American Outdoors Act passed the U.S. Senate with a 73-25, bipartisan majority. The measure would automatically set aside as much as $1.9 billion annually from oil and gas leases to protect natural resources and maintain national parks. The bill would require the federal government to spend at least half of the money to work on a $20 billion backlog in deferred maintenance in places like the Grand Canyon. The bill would also allow the federal government to spend a portion of the money for additional land.

President Trump has promised to sign the measure if it makes it to his desk, even though recent budgets have slashed the money earmarked for maintenance of national parks and other federal lands.

Rep. O’Halleran last week said, “There is little more important than the protection of our most precious public lands and parks. Today, I was proud to join my colleagues on both sides of the aisle in voting to safeguard our nation’s treasures, wildlife habitats, waterways and the rich cultural heritage of many Native American tribes and make critical improvements in BIE schools.”

But Rep. Paul Gosar said the bill would squander money buying additional land to add to millions of acres the U.S. government has already failed to adequately manage or maintain.

The bill would also make the Land and Water Conservation Fund a mandatory spending fund at $900 million annually, with 40% of the money earmarked for state and local governments for parks and other conservation projects.

Among other amendments, Gosar wanted to bar any fresh federal land purchases in counties where the federal government already owns more than 50% of the land — which would include Gila, Apache and Navajo counties. The federal government could only add land to its holdings in such counties if it sells an equal amount of land it already holds in that same county.

The cattle industry, the National Counties Association and other groups have lined up against the expansion of federal lands.

In a release Rep. Gosar said, “I am categorically opposed to permanent funding and reauthorization of the Land and Water Conservation Fund. This would take the program outside of congressional oversight and commit $900 million a year to be used for reckless land buying. The communities I represent in Arizona are tired of Congress giving up its responsibilities, piling up trillions in debt for future generations and allowing the federal government to mismanage their land.”

On the other hand, Rep. O’Halleran said, “These parks, monuments and historic sites bring in billions for our state and local economies each year. Maintenance of public lands plays a critical role in the health of our wildlife, the preservation of Native American cultural sites, the mitigation of deadly wildfires and the strength of our economy. I’m proud to join my colleagues on this bill to permanently fund the LWCF and preserve our public lands for generations to come.”

The Outdoor Industry Association has done an economic analysis suggesting outdoor recreation in Arizona contributes $21 billion to the economy annually and supports 200,000 jobs.

For the past 20 years, Congress has annually earmarked only a fraction of the money originally intended for the fund — spending between $255 million and $450 million in most years. The bill would basically double funding, with no need for an annual vote by Congress.

Polls suggest that perhaps 75% of voters support increased funding for parks and national monuments, which studies show face as much as $20 billion in deferred maintenance costs.

However, critics of the conservation fund like Gosar say it makes no sense for the federal government to buy additional wild lands when it can’t maintain its existing holdings.

A coalition of ranching groups made the same point in coming out against the permanent, automatic extension of the fund, which Congress has fully funded only twice in the past several decades.

“If passed, the act sentences hundreds of millions of acres of American land and water to a poorly managed future. We do not believe that acquisition on this scale would be anything but an utter failure by Congress to perform its oversight role,” the National Cattlemen’s Beef Association and the Public Lands Council said in a press release.

“Federal land ownership can create burdens for local governments, including reduced property tax revenue from a decreased share of private land that in some cases are over 90% federally owned, which reduces their economic development potential and tax bases.”

A coalition of business groups in Arizona pushed for passage of the act to boost the economy through outdoor recreation.

“Arizona is the envy of the West, having world-class outdoor recreation opportunities. The reality is that our state depends heavily on outdoor recreation tourism and if we don’t stand up to protect this important economic asset, we could stand to lose access to these places from threats such as development, mining and underfunding,” said Scott Garlid, executive director of the Arizona Wildlife Federation.