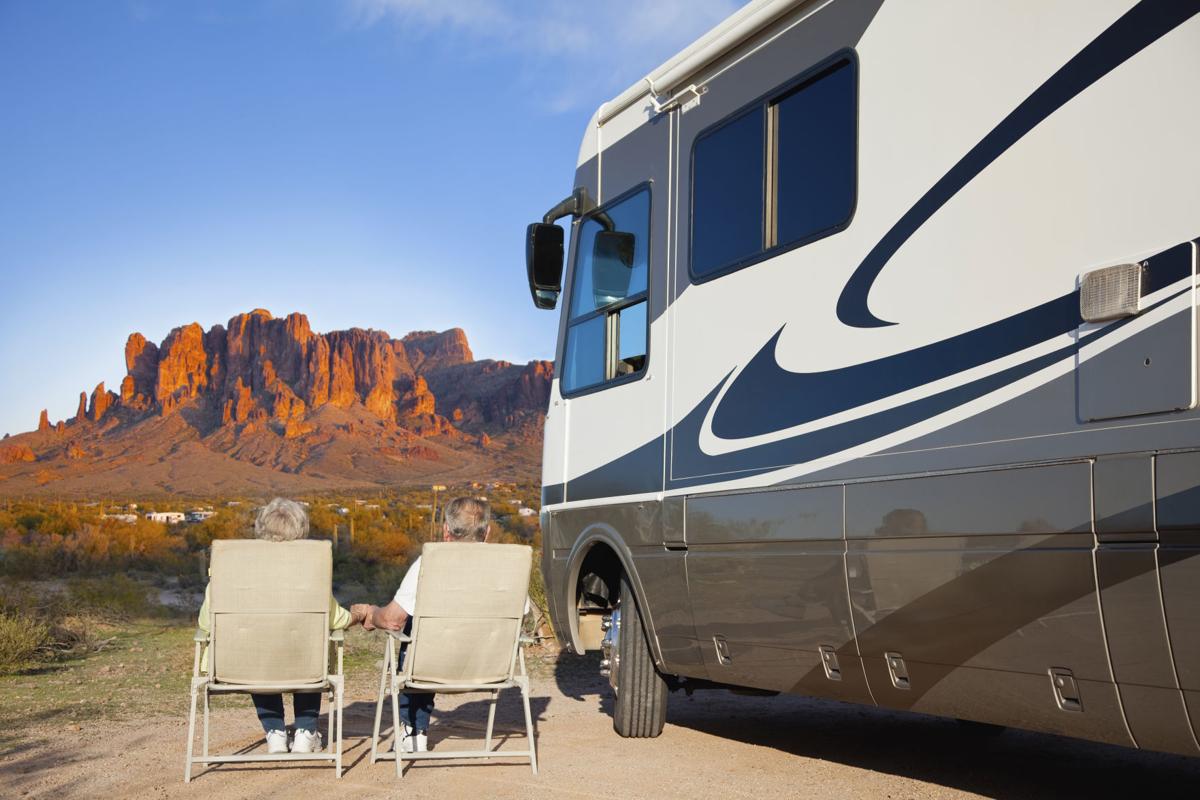 Recreational vehicles are popular in Arizona. 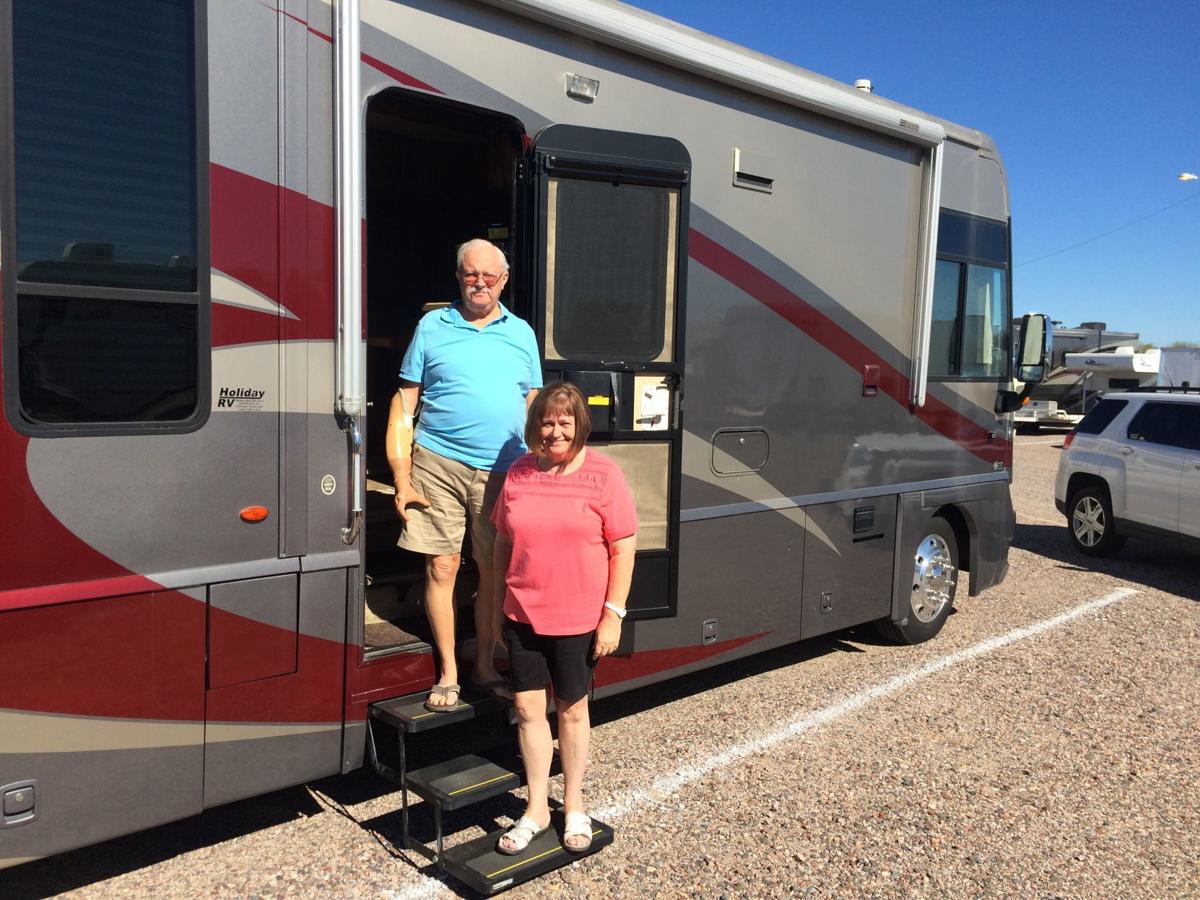 Lowell and Dawn Johnson of Florence travel around North America in this 40-foot Winnebago Adventurer. 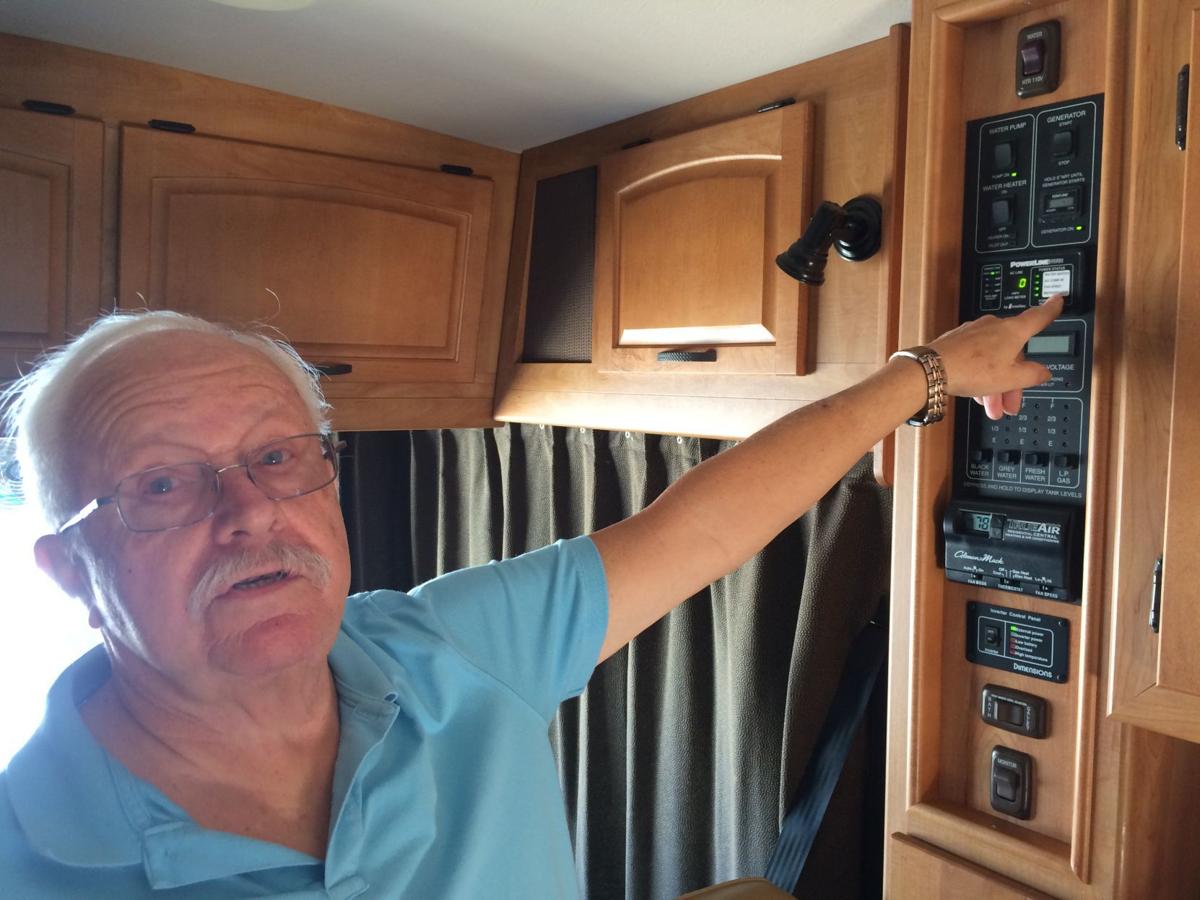 Lowell Johnson of Florence shows a visitor the control panel in his 40-foot Winnebago Adventurer. 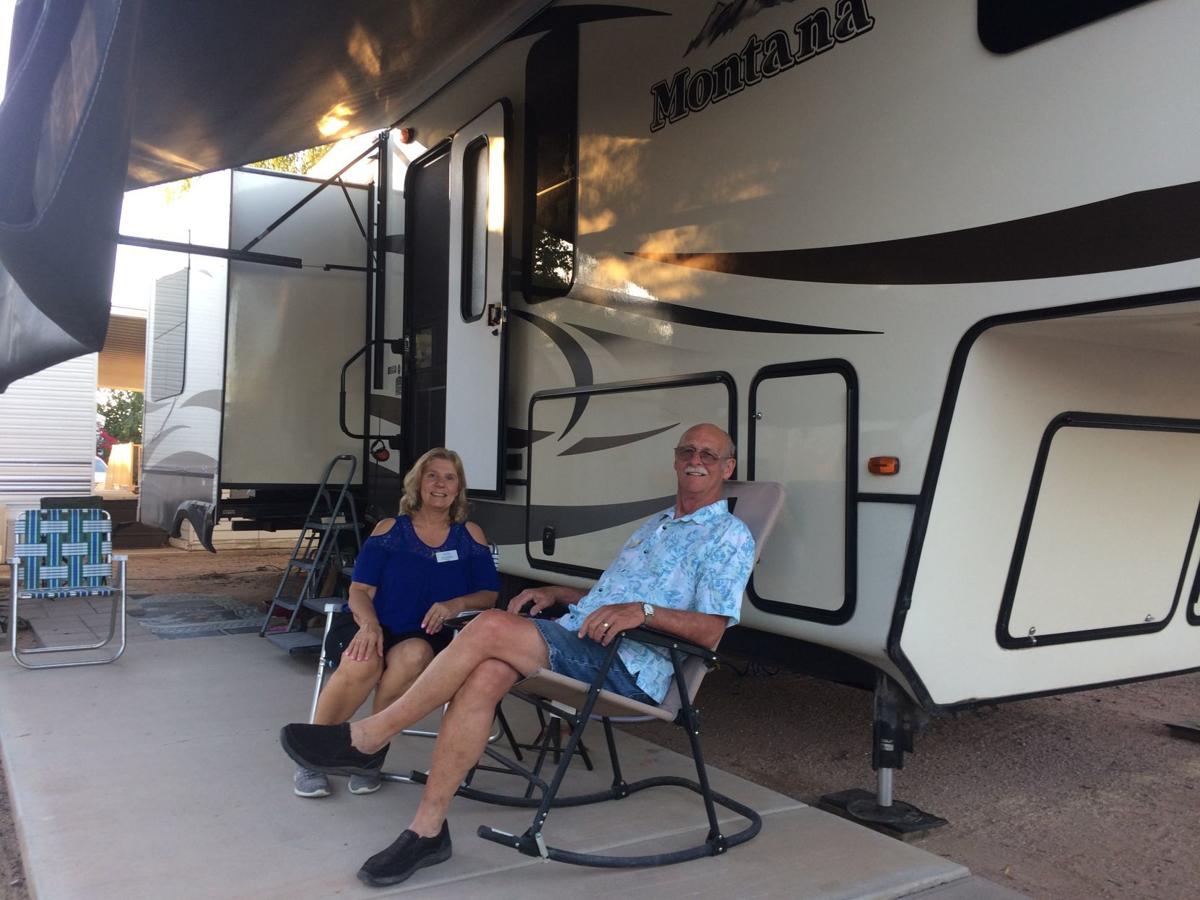 Mike and Karen McCullen are RVers who live part of the year at Fiesta Grande RV Resort.

Recreational vehicles are popular in Arizona.

Lowell and Dawn Johnson of Florence travel around North America in this 40-foot Winnebago Adventurer.

Lowell Johnson of Florence shows a visitor the control panel in his 40-foot Winnebago Adventurer.

Mike and Karen McCullen are RVers who live part of the year at Fiesta Grande RV Resort.

If you were stuck living in a home where you didn’t like your surroundings or your neighbors, getting out would be difficult. You might have to make repairs, hire a real estate agent, get ready to leave on a moment’s notice for a showing, shop for a new home and apply for a mortgage. The whole process could take months.

Lowell and Dawn Johnson could relocate their home as simply as turning a key and stepping on a pedal.

The Johnsons lived full time in a motor home after they retired, traveling around North America while moving to a new place as often as every eight to 10 days.

“If you have a motor home you can go anywhere you want to go,” Lowell said. “You’re free.”

“You meet a lot of new people,” added his wife, Dawn, as they sat in the family room of their home in Florence.

During their three or four years on the road full time, they visited 26 states, Mexico and Canada. Ideally, they would leave a spot by 10 a.m., be off the road by 2 p.m. and enjoying cocktails by 3 p.m. On the downside, they once felt like fierce wind would blow their motor home onto its side, and they stayed at an RV park in New Mexico next to what looked like the Norman Bates “Psycho” motel. They also enjoyed great food and beautiful weather in Mexico, and the scenery at some of the United States’ most desolate places such as the Black Hills and the Badlands of South Dakota.

After their time on the road full time, the Johnsons bought a home with a foundation and kept their motor home for less frequent travel.

Considering national statistics and the abundance of RV parks and dealerships in the area, the Johnsons must be among thousands of people in Pinal County who spend time living in a recreational vehicle.

“The RV lifestyle,” as it’s sometimes called, varies widely. Some people live full time in their RVs, traveling to a new spot every week, while others might live half a year in a house and the other half parked at an RV resort. Some people travel in their RVs just a couple of weeks a year.

“Everyone does it different,” said Mike McCullen, who lives with his wife, Karen, at Fiesta Grande RV Resort in Casa Grande seven months a year.

Vehicle choices also vary widely. The two main categories of RVs are motor homes, in which the living quarters and vehicle are part of the same unit, and “towables,” which are trailers towed by a family car, van or pickup. Choices range from a $6,000 folding camping trailer to a $500,000 Class A motor home that’s basically a small luxury home with four wheels underneath it.

Rich and Sharon Wilson of Saddlebrooke initially bought a 16 1/2-foot Class C RV they used a month a year on vacation. Their latest model is a 40-foot Class A motor home, a Coach American Tradition. Class A motor homes resemble a bus in design with a flat or vertical front end and large windows. Class B and C motor homes look more like traditional vans or trucks. The Johnsons started in the 1960s with a pickup topper and a tent for camping outings and have progressed to a Winnebago Adventurer, a Class A 40-footer.

The big motor homes have features such as washer, dryer, ice-maker, refrigerator, air-conditioner and heater, fireplace, lots of storage, satellite TV and a big kitchen. The Wilsons’ amenities get a lot of use, except for the kitchen.

“It’s for show. It’s to store potato chips in the oven. We are kind of retired from cooking,” Rich said. “When you get to your destination, you can pull over and you have all of the comforts of home. I’m not one for roughing it.”

The Wilsons and Johnsons tow their cars with their RVs so they have something small to drive when the occasion calls for it.

Both couples are members of RV clubs and take trips with fellow members one week a month during the non-summer months. They stay in Arizona usually but have gone to neighboring states. During the summer, they break out on their own across the country to see family.

“We can visit people we haven’t seen in a long time without knocking on the door and saying, ‘Here we are. We are going to stay with you for a couple of days,’” Rich Wilson said.

The McCullens’ RV has three TVs, a full-sized refrigerator and king-sized bed, although it has no engine or steering wheel. It’s a 36-foot Montana fifth-wheel trailer, which the McCullens pull with a pickup truck.

They spent the first half-year of their retirement moving every month or so, “running from the snow,” Mike said. Now, they mostly drive their RV twice a year — from their home in Michigan to Casa Grande in the fall, and from Casa Grande back to Michigan in the spring.

To help pay for their lifestyle, they work as hosts at Fiesta Grande every third week. Karen works in the office, and Mike helps new arrivals find their spot and park their rig. They earn a little extra money and get discounts on their rates.

Living in an RV comes with challenges, the biggest of which is as green as the horse pastures of Kentucky.

The Johnsons paid more for their home on wheels than their home on the ground. The price tag for a new RV, or even a used one, can stretch into six digits. There are also costs for storage, winterizing and fuel (the Johnsons burn a gallon every seven miles). Campsites cost between $25 and $85 per night, although less if rented by the week or month. There’s also maintenance and repairs.

In addition, RV repair shops aren’t as plentiful as those for the family car, and you don’t know where to find them when you are 1,000 miles from home.

“You don’t know who’s honest,” Mike McCullen said. “Or, they want to keep your RV for a week.”

The McCullens were staying in the Florida Keys when rats ate their RV’s hydraulic lines, which needed to be replaced. They also got a flat tire in Florida. Fixing a flat tire on a 14,000-pound RV isn’t as easy as grabbing your standard car jack and cranking it up. They had to wait three or four hours for a pro to come change the tire.

The Johnsons were stuck in Forest City, Iowa, for 10 days waiting for parts or repairs. That wasn’t as bad as the three weeks in a hotel room in Elkhart, Indiana, which wasn’t exactly Disneyland. “It was very boring,” Dawn said.

When the vinyl water supply line to the ice-maker became brittle, a stream of water shot out and hit Rich Wilson in the head. It was a reminder that RV maintenance includes more than the engine.

“When you have a motor home going down the road at 55 to 60 mph, the fridge, washer, dryer, it’s not like having it in your house where it’s stable,” Sharon Wilson said.

Sharon plans the Wilsons’ trips down to the day, with a reservation to stay somewhere each night. Spontaneity is trouble. With recreational vehicles becoming more popular, parks might be full, and with the vehicles becoming bigger, available spaces might be too small. You could get stuck at a rest stop with no security and no power. Walmart and casinos will welcome RVers to their parking lots, but not always. When a Walmart near the Canadian border wouldn’t allow the Johnsons to stay there, they were lucky to find a casino off the highway about 20 miles away.

A motor home or a trailer/pickup combo can be more than 40 feet long and difficult to maneuver. Karen won’t get near the wheel, so Mike does all the driving for the McCullens.

“If you miss an exit, you don’t turn around and go back,” Lowell Johnson said.

Despite the challenges, RV owners who spoke to Pinal Ways said they have no regrets.

When the Wilsons decided to join a club, they found one in which most of the members had served in the military. Rich, who worked 15 years at Coors Brewery in Colorado, was not a military man and was concerned whether he would fit in. During an early conversation, sure enough, the question came up.

“They said, ‘Did you serve in the military?’ I said, ‘No, but I served the military.’ They said, ‘What did you do?’ I said, ‘I made beer,’” Rich said. The other members seemed to like that response, and the Wilsons have been enjoying the camaraderie of outings with their RV club ever since.

At Fiesta Grande RV Resort, there is a long list of amenities and activities, including dances, concerts, card games and a swimming pool, that keep the McCullens busy.

“There’s so many activities. If you get bored it’s your problem,” Mike said. “People here are very happy. Rarely do you find negative people.”

The Johnsons, like the Wilsons, enjoy the time they spend on the road with their club.

“They’re the nicest people. You can’t believe how much fun we have,” Dawn Johnson said. | PW

ARIZONA CITY — Recreational vehicle enthusiasts are invited to attend a meeting to discuss regulations and form a committee.