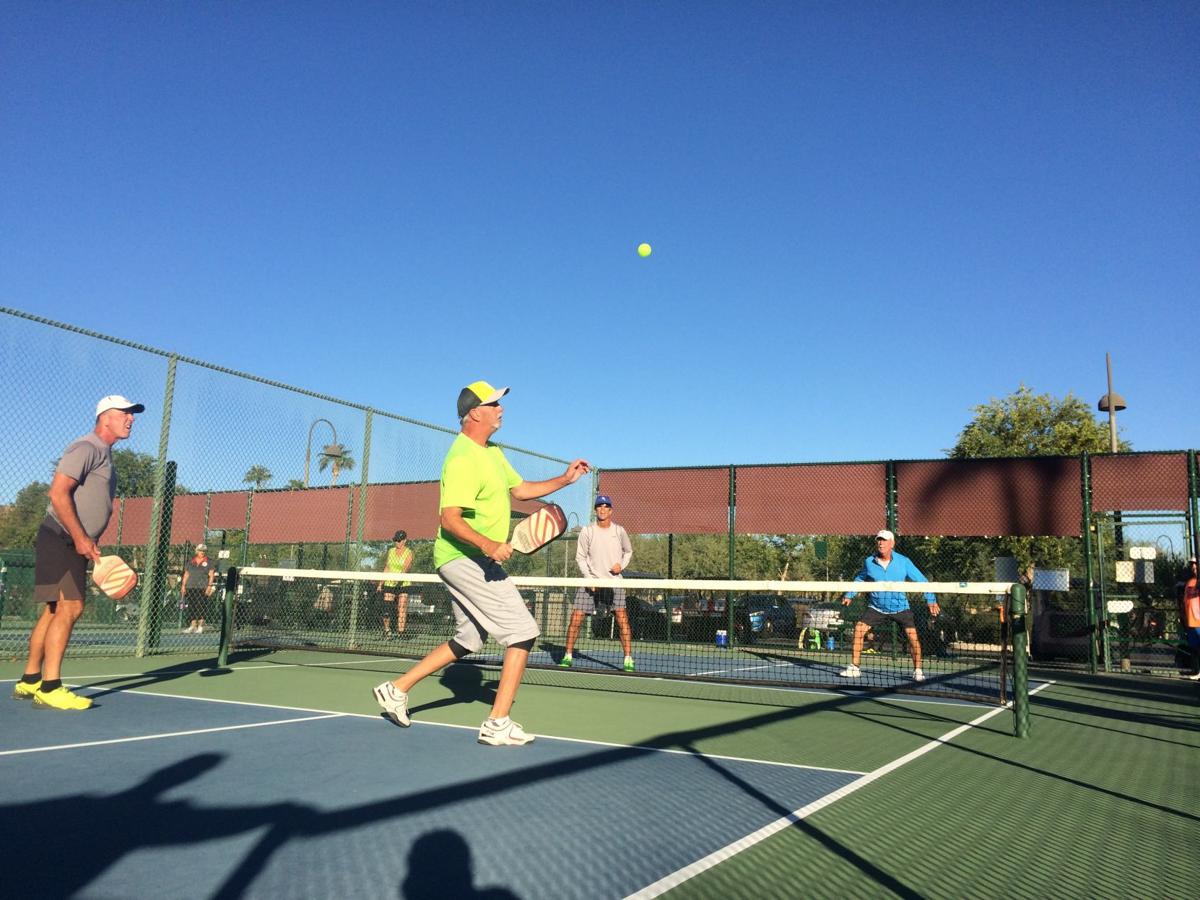 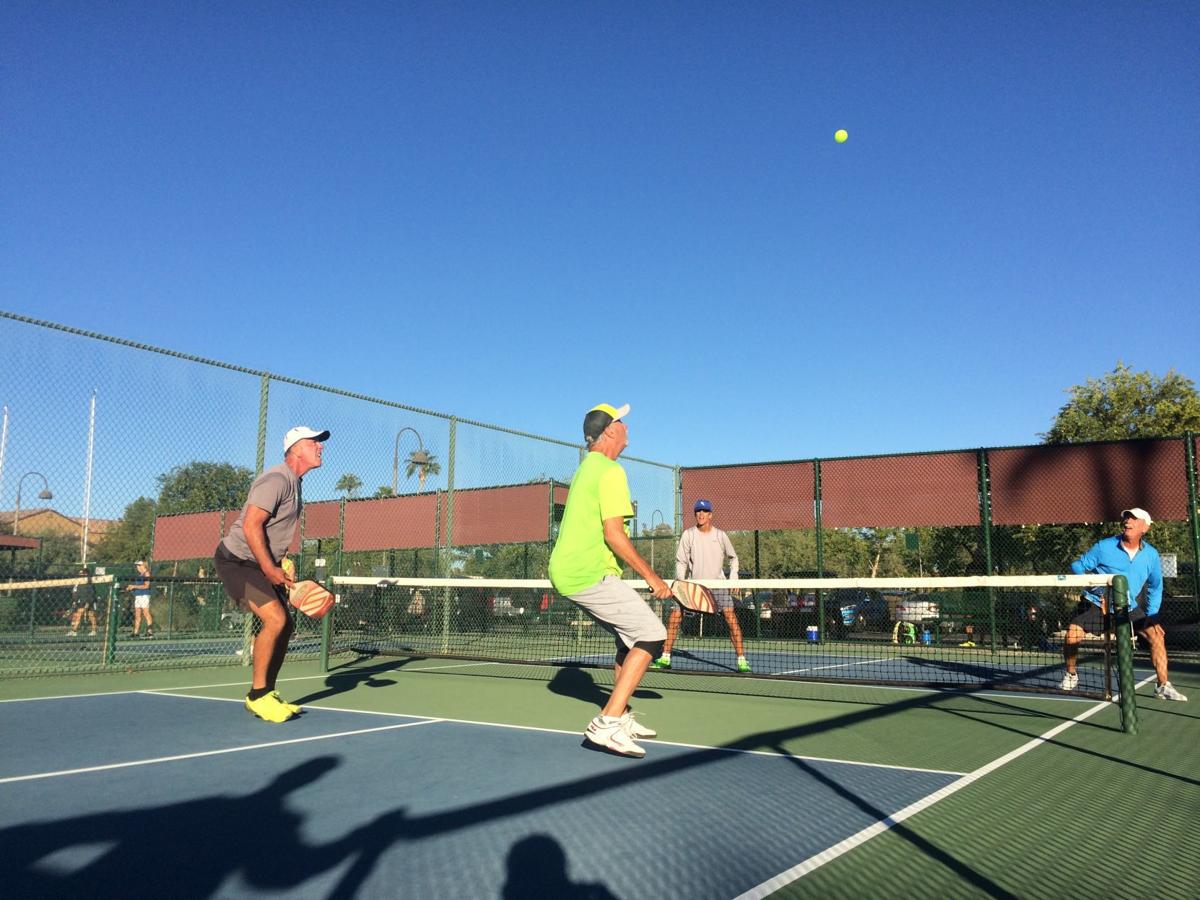 Men play pickleball at Robson Ranch in Eloy in November. Active adult living is one of the Lifestyles explored in the Winter 2018-19 issue of Pinal Ways magazine. 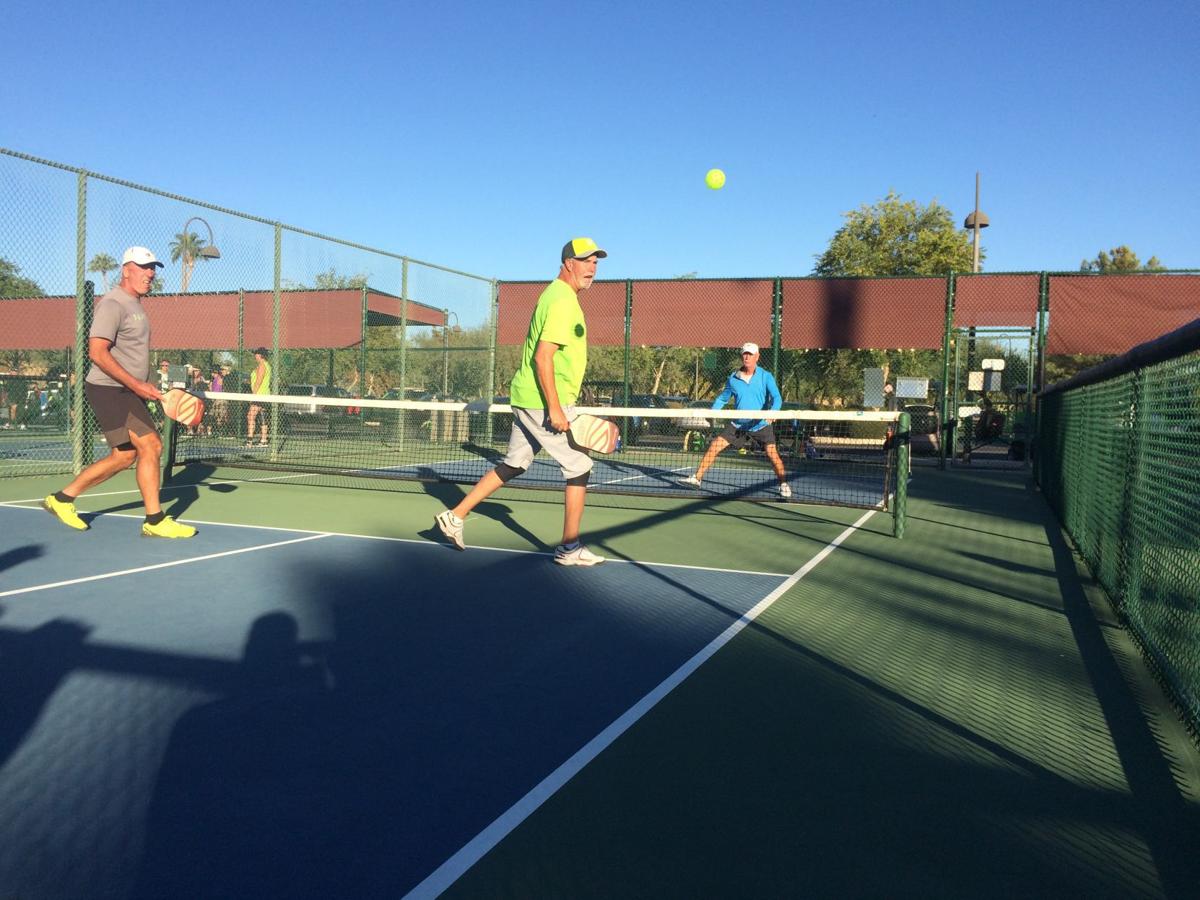 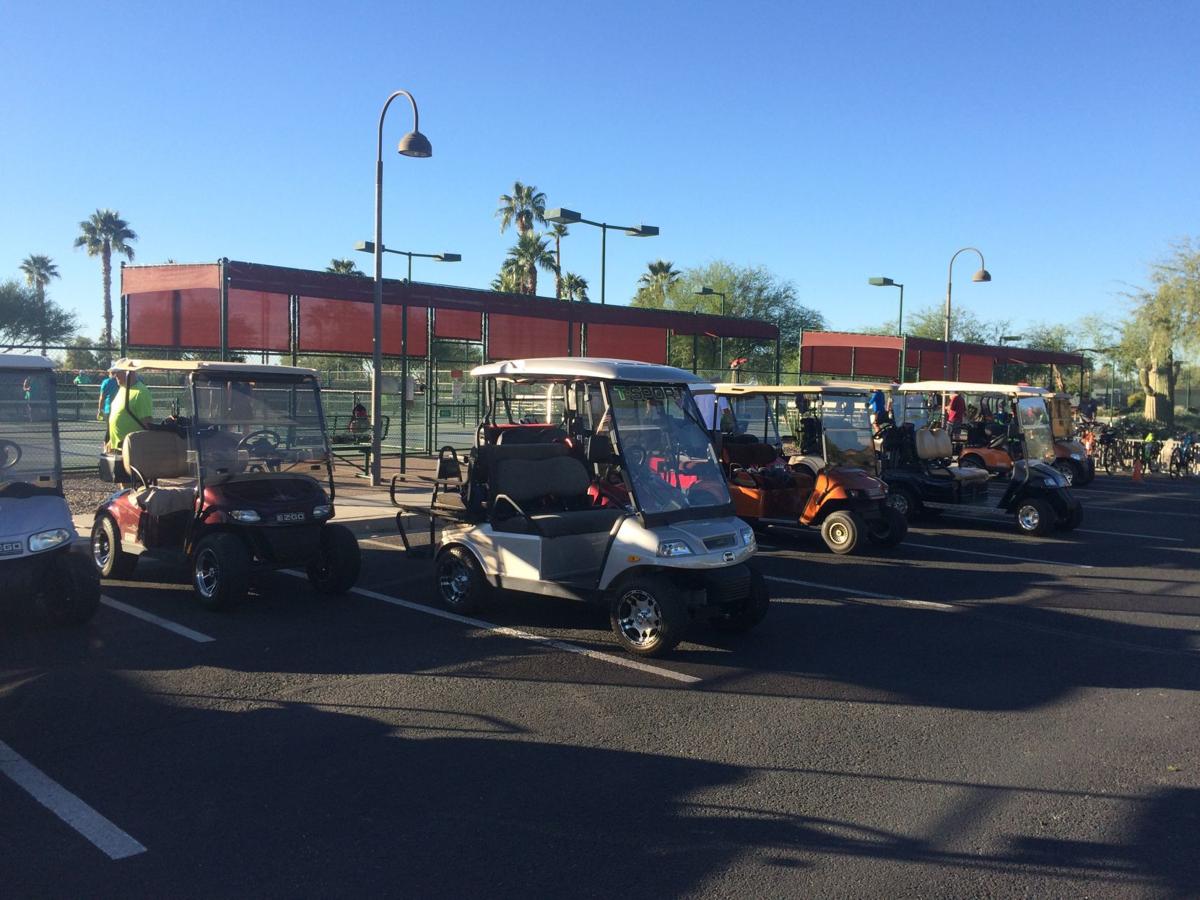 There is no shortage of golf carts at Robson Ranch, even away from the golf course. 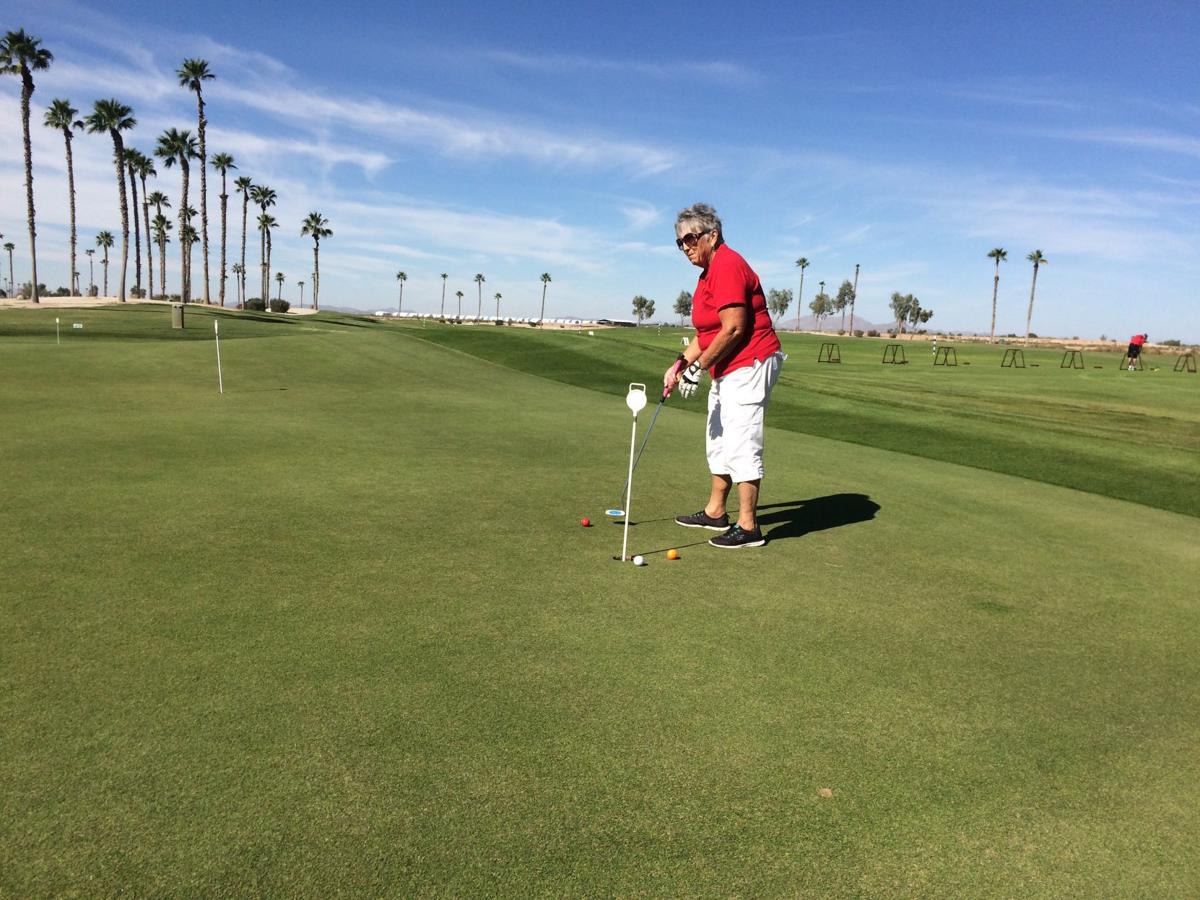 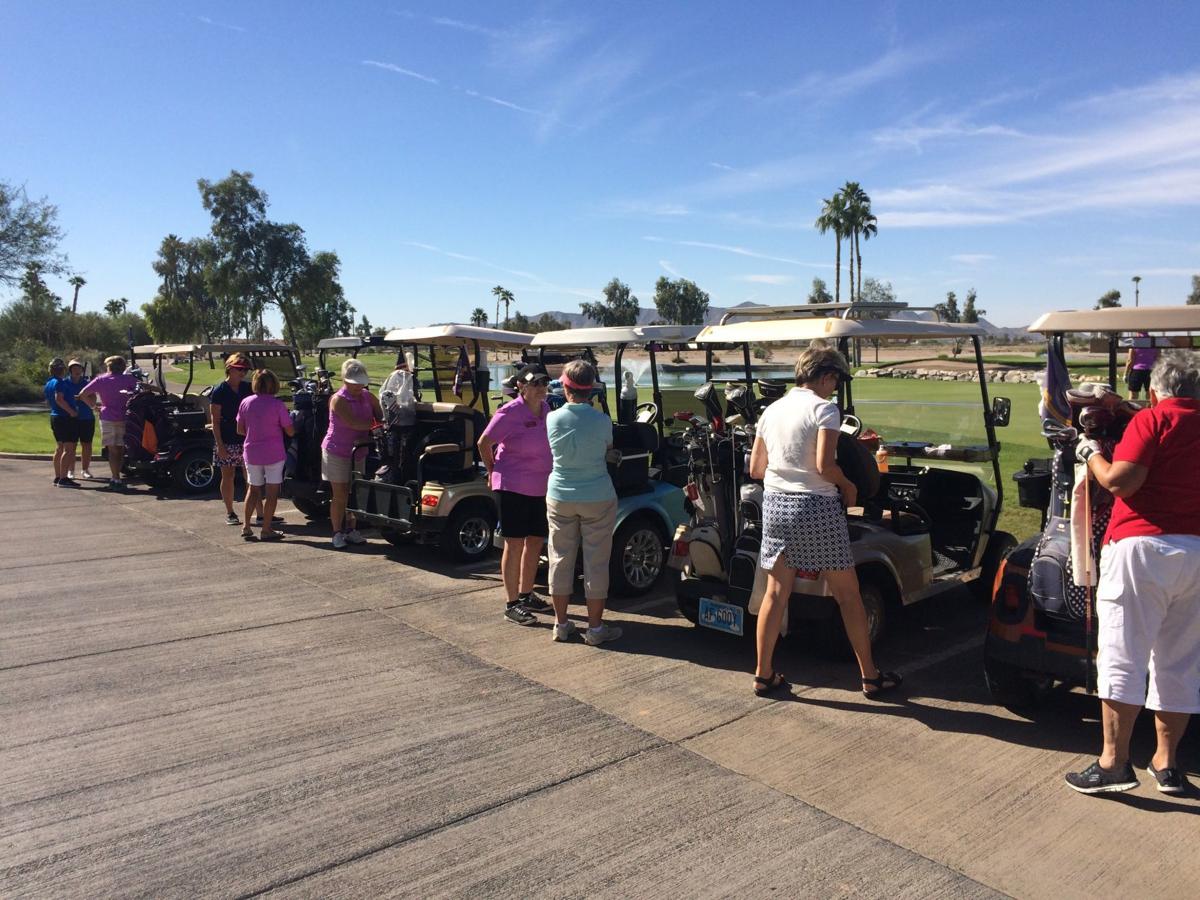 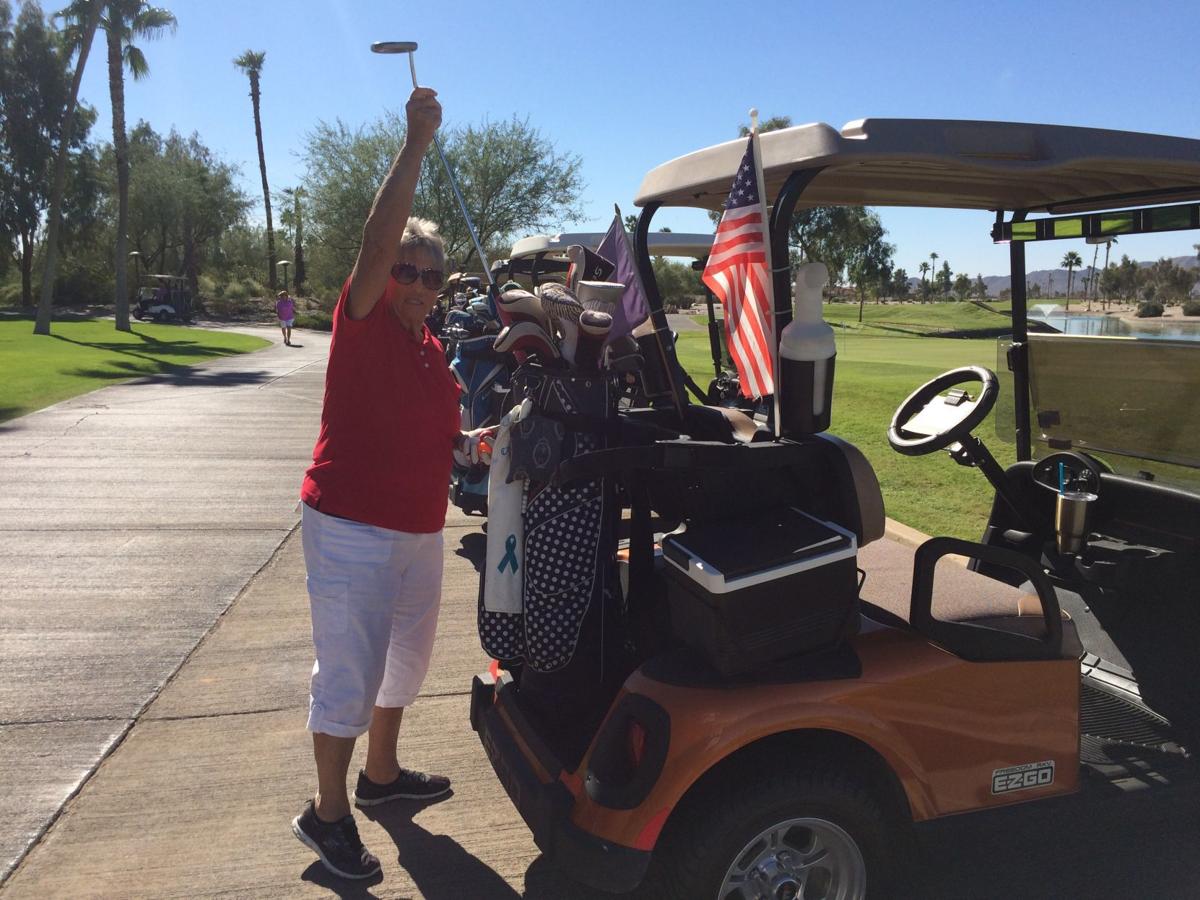 Mary Beth Fisher, president of the Robson Ranch Lady Lynx Nine-Hole Golf Association, gets ready for a round of golf. 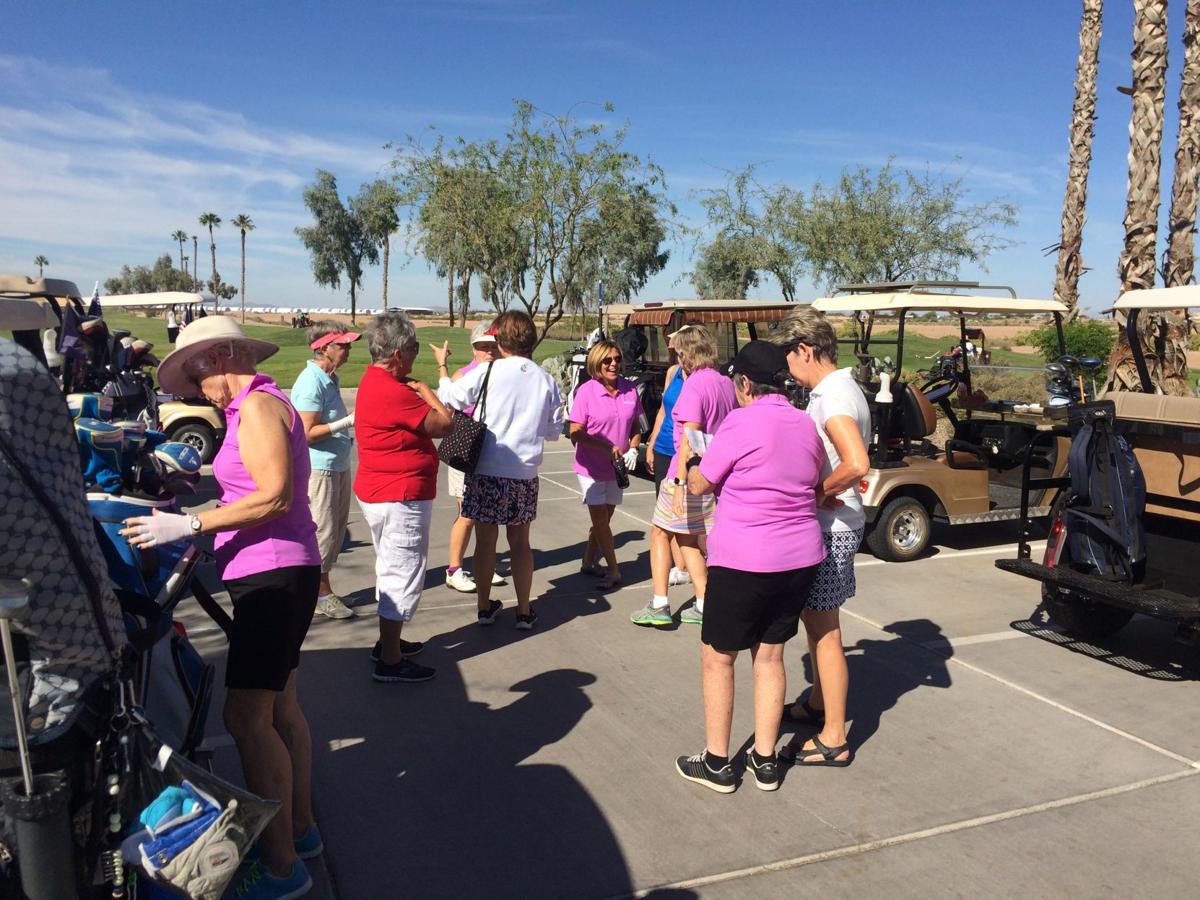 Men play pickleball at Robson Ranch in Eloy in November. Active adult living is one of the Lifestyles explored in the Winter 2018-19 issue of Pinal Ways magazine.

There is no shortage of golf carts at Robson Ranch, even away from the golf course.

Mary Beth Fisher, president of the Robson Ranch Lady Lynx Nine-Hole Golf Association, gets ready for a round of golf.

It's 8 a.m. on Wednesday, but it looks and sounds like Saturday.

People are out walking dogs, playing golf and driving their golf carts through the streets. Men on large riding lawnmowers cut the grass on either side of the road. At the pickleball courts, about 40 people are playing or waiting to play. The soft popping of balls hitting paddles fills the air. And there's more golf carts. About 20, some side by side, are in parking spaces like they're cars. They're not just for golfers.

"I think there's more golf carts than cars here," said Tom McKinney, who has lived at Robson Ranch in Eloy with his wife, Rebecca, since June 2015. "It's one of the first things people buy when they move here."

And more people are moving here. This patch of land near Casa Grande was open desert before the first Robson Ranch homes were built in 2005. The community sold about 350 homes in its first year of operation, and in December 2017, it closed on its 1,000th home. Shortly afterward the city of Eloy approved construction of 80 more homes. Robson Ranch is one of 110 "active adult" communities in Arizona listed on the real estate website 55places.com. According to the website, the number of such communities is growing as the United States' 55-plus population grows.

The McKinneys lived in San Diego when they came to visit family in Arizona and noticed a Robson Ranch sign next to the freeway. They were looking to escape the traffic and cost of living in California, so they packed up their lives and moved here.

"We just really fell in love with the people and the community," McKinney said. "The people are wonderful."

Tom started playing pickleball, a game similar to tennis but played with a paddle and on a smaller court. Now, he plays most mornings.

"I was going to play golf," he said. "I started playing pickleball, and now I don't play golf anymore."

The McKinneys are also members of the Robson Ranch RV club and take their recreational vehicle on frequent outings with other club members.

If you're not into pickleball and don't own an RV, but want to live in an active adult resort community, no fear. More than 40 clubs and activities are listed on Robson Ranch's website. Club members play cards, woodwork, create arts and crafts, play horseshoes and ping-pong, sing and write. Athletic clubs, in addition to pickleball, include golf, hiking, softball, tennis and yoga.

"If you're bored it's because you want to be bored," McKinney said. "There's so much to do here it's ridiculous."

After the 1970s Robson built seven more similar communities, including four in Pinal County — Robson Ranch, Saddlebrooke, Saddlebrooke Ranch and The Preserve. They have single-family homes and amenities such as restaurants, clubhouses, golf courses and other sports and community facilities. They are gated and considered "55-plus active adult." By law, at least 80 percent of residents must be 55 and older, with the rest 40 and over. Children are not allowed to live there permanently.

Then there's that word "active." Translation: It's not a nursing home. It's not designed for people who need transportation, assisted living and memory care services. It's for people who want to get up every day and walk, ride a bike, swim or smack a ball around.

Robson Ranch's community sports club has a pool and spa; fitness center; a room for dancing, yoga and aerobics; and massage and steam rooms. A fitness instructor is available. Outdoors, there are pickleball and tennis courts.

There's also an 18-hole golf course, which Mary Beth Fisher drives one of those ubiquitous golf carts to and from.

Mary Beth and her husband, George, moved to Robson Ranch 11 years ago after they retired. They had lived in California for 31 years and in Colorado briefly but left when George couldn't take the elevation.

"I knew I wanted an active adult community when I retired," Fisher said. "I didn't want to have to drive to find something to do like you would in a small town or even a medium-sized town."

She is president of the Robson Ranch Lady Lynx Nine-Hole Golf Association, whose members play nine holes of golf each week. She teaches mah jongg and leads water exercise classes several times a week. She started a charity event and an organization that both support U.S. military troops. Then, she started a social club.

"I never wanted people who would move here to feel like they didn't belong. I wanted inclusive, not exclusive," she said.

Most weeks she leaves the community only once, to attend church on Sunday and buy groceries.

John Horak plays golf around three times a week and is the treasurer of the men's golf association. He spoke to Pinal Ways after playing his first round of golf in three weeks because the course had been closed for overseeding.

"It was not an artistic success this morning in the wind, but it was a pleasure just to get out there again," he said.

He moved to Robson Ranch with his wife, Claudia, in December 2013 from Dana Point, California. While John plays golf, Claudia is involved in book and arts groups and attends theater events and concerts.

"It was a younger retirement community, very vibrant, very friendly," he said of Robson Ranch. "The golf is one thing, and the other thing we were looking for, which is very important, was maintaining a fit physical body into our retirement years. The last thing we wanted to do was grow old and fat."

The Horaks have lived places where people ignore their neighbors. Here, they attend block parties together.

"Everyone here is so friendly and pleasant," he said. "They wave, they say hello, they care about you." | PW