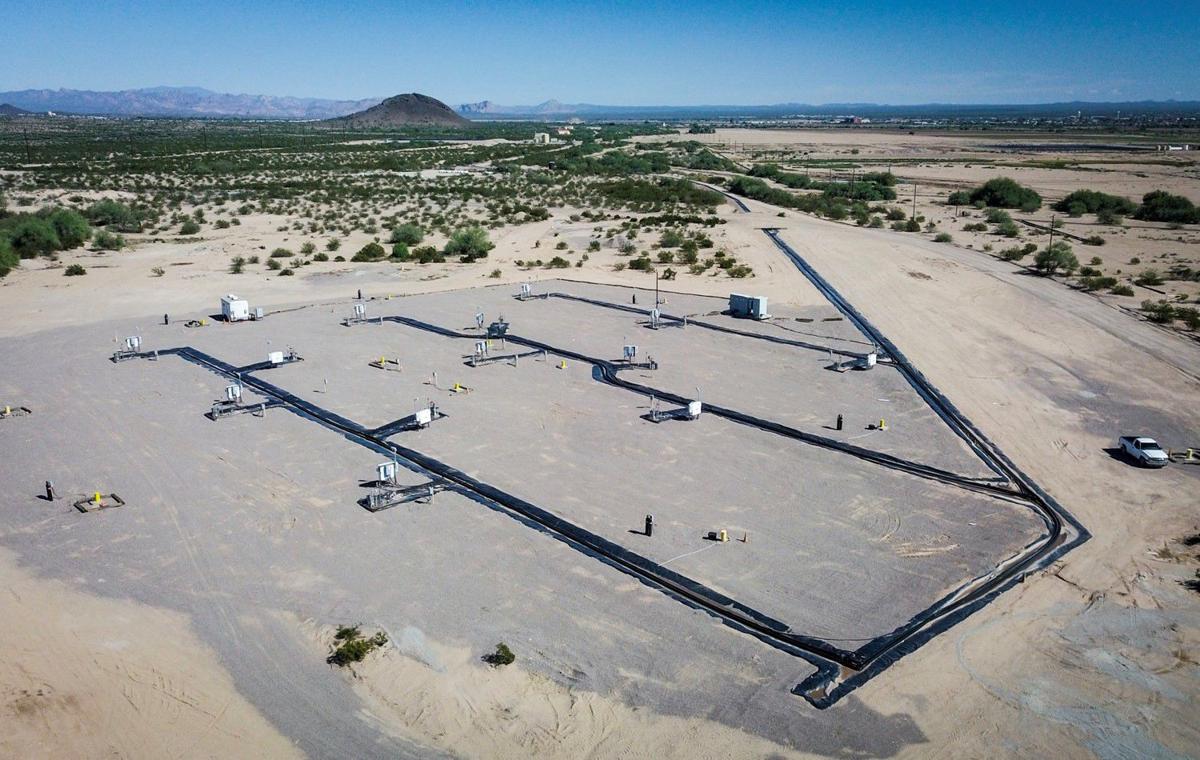 The current wellfield for the Florence Copper Production Test Facility. 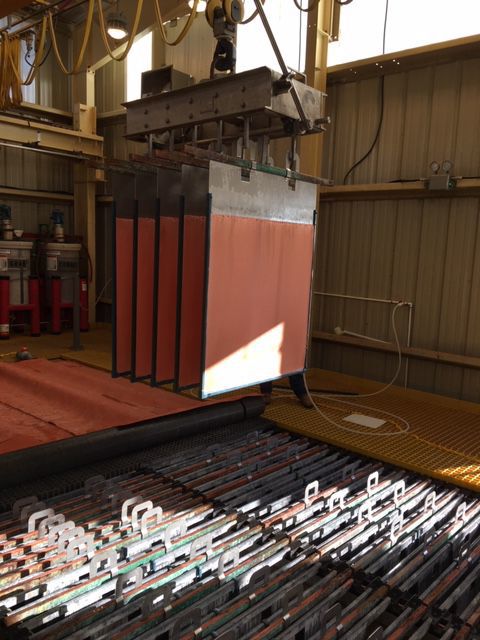 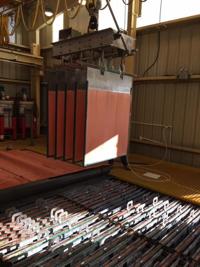 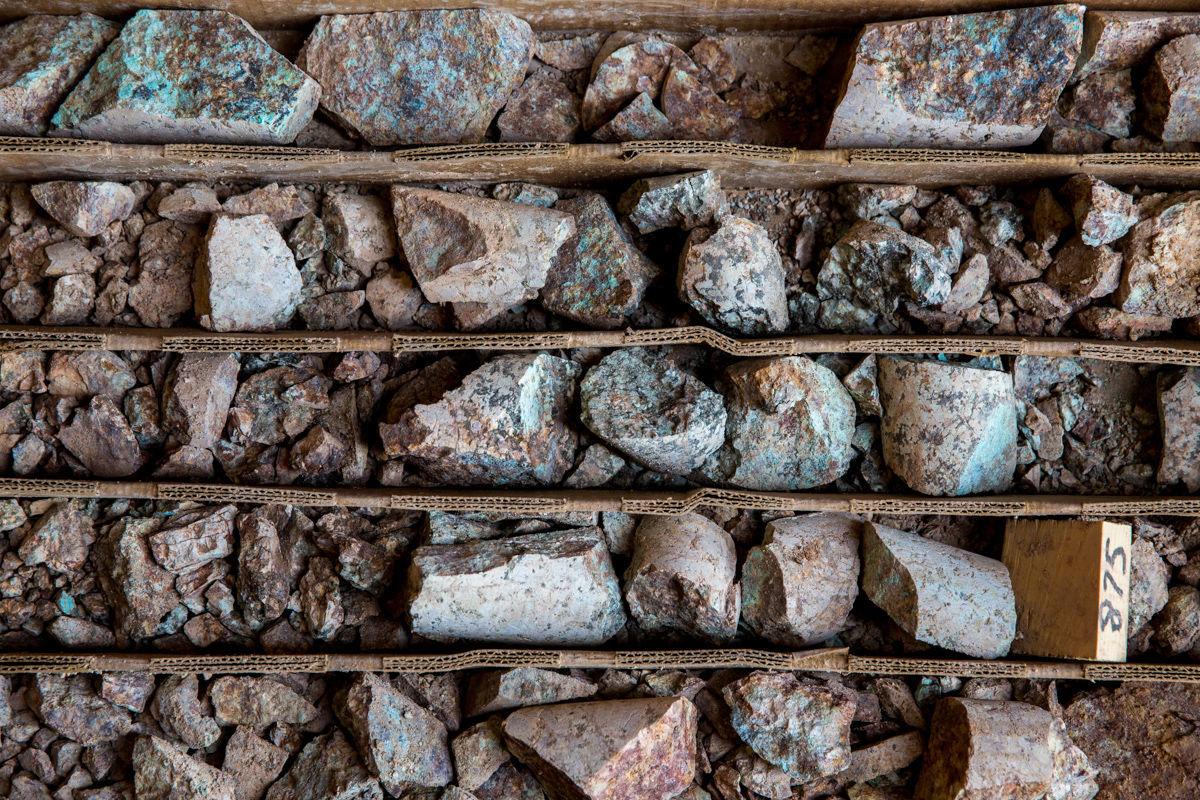 Florence Copper displays a core sample from one of its deposits. 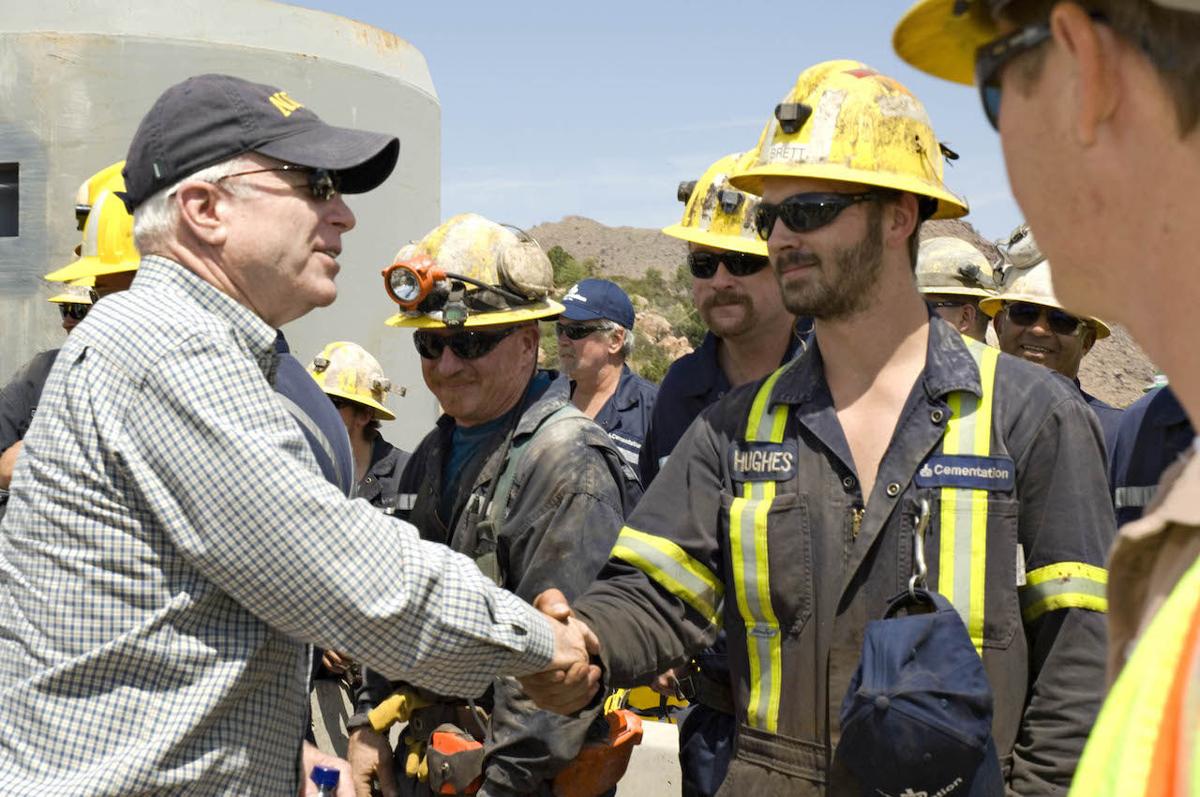 The late Arizona Sen. John McCain greets Resolution Copper employees and contractors during a visit to the mine site near Superior. 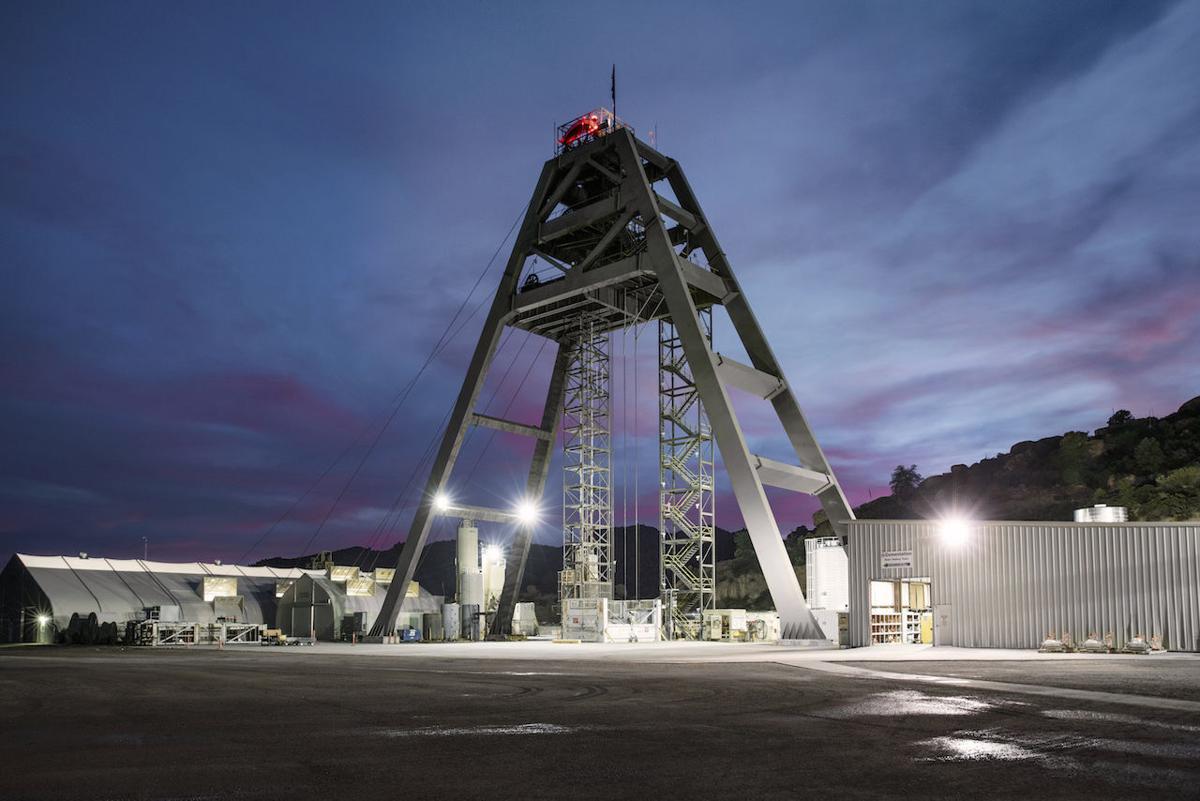 Shaft 10 at the Resolution Copper site near Superior is one of the primary access points for the future mine.

The current wellfield for the Florence Copper Production Test Facility.

Florence Copper displays a core sample from one of its deposits.

The late Arizona Sen. John McCain greets Resolution Copper employees and contractors during a visit to the mine site near Superior.

Shaft 10 at the Resolution Copper site near Superior is one of the primary access points for the future mine.

I t’s pitch black at the bottom of a copper mine, hundreds or thousands of feet below the earth’s surface. That’s true now just as it was for the miners who worked in the Superior area a hundred years ago.

With technology changing rapidly and the permitting process moving slowly for two big mining projects in Pinal County, it’s similarly difficult for those trying to see into the industry’s future.

One thing is certain, though. Copper mining will be a growing part of the county’s economy. No one knows by just how much.

Resolution Copper is building and testing what is expected to be the largest copper mine in the United States when it opens, which is still several years away, said Resolution Copper spokesman Dan Blondeau.

On a smaller scale, Florence Copper is working toward opening an entirely different type of mining operation but encountering similar issues with permitting and resistance.

There are so many variables. What will supply and demand be? Will there be more legal challenges and opposition to the mines? Will there be permitting delays? How will technology continue to change the number of types of jobs that need to be filled?

Resolution Copper, located near the town of Superior, is a massive operation. The mine will tunnel more than a mile underground to reach a copper deposit so big that the mine will meet nearly 25% of U.S. demand every year, according to the project’s website. That’s 1 billion pounds of copper produced each year.

The project is owned jointly by the mining companies Rio Tinto and BHP Billiton.

The process for permitting and approval from government agencies, which includes public comment, takes years for something this big. The mine is still years away from full operation, Blondeau said, although testing and other work is taking place now.

The mine would utilize block caving, in which ore is blasted and extracted from below the copper-rich rock, creating a void. The copper-rich ore would then collapse into the cave and break into pieces. Equipment underground would crush the rock into smaller pieces before it is lifted to the surface and sent for processing, where the copper is separated from the rock.

Block caving is a technique that has gained popularity in recent years because it’s less expensive than other underground mining methods. It’s an example of how technology is changing mining.

“All aspects of mining have experienced advances in technology over the past two decades, including exploration, ore extraction, water treatment and reclamation,” according to Blondeau, who responded to questions in writing. “Mining is drastically different from the way it used to be.”

The fully operational Resolution Copper mine should result in roughly 3,700 direct and indirect jobs, said Blondeau. The company estimates 1,400 direct jobs. Right now, even during this early stage, 525 people work on the project, Blondeau said.

The number and nature of the jobs could change as technology advances.

“While some types of jobs available today may not be available in the future – it’s not necessarily a bad thing. We’re utilizing technology and automation to engineer out hazards and risks to keep people safer,” according to Blondeau.

“For example, drones have a variety of applications, including exploration activities, inspecting equipment and filming blasts.”

The project is moving forward despite opposition from Native Americans, environmentalists and some other residents. In 2014, the federal government approved a land exchange that gave Resolution Copper 2,400 acres of federal land in exchange for 5,300 acres of land Resolution Copper owned.

Environmentalists are concerned about possible harm to the water supply and endangered species. The San Carlos Apache Tribe says the Oak Flat area where the land exchange took place is spiritually significant and should not be disturbed by a mine.

“This is my religious right, my indigenous right and my inherent right to return home to protect it from being murdered and protect our future generations,” wrote Wendsler Nosie Sr., former chairman of the San Carlos Apache Tribe, in a letter to the U.S. Department of Agriculture. The letter was sent late last year, according to the Associated Press.

Copper is a hugely important mineral to make modern society function. It is used in electrical equipment because it conducts electricity well and can be easily split into wires. It’s especially important for use in aerospace, transportation and telecommunications systems.

“Demand for minerals is rising exponentially as a result of these types of new technologies,” wrote Steve Trussel, executive director of the Arizona Mining Association, in response to questions about the future of mining. The AMA is a mining trade organization.

Mining in Pinal County employed 1,222 people in 2016 and 1,703 in 2018, according to a report from the Arizona Office of Economic Opportunity. Those numbers will rise significantly as Resolution Copper and another project, Florence Copper, ramp up.

The increase of jobs comes even as technology makes mining more efficient, with fewer workers needed for each ton of copper produced.

Mines today use drones, batteries and the Internet of Things in ways inconceivable 20 years ago.

“Mining is a very data-intense industry. Today, nearly every device in a mine is ‘smart’ and constantly relaying data such as water pressure, temperature, air quality and other information. Data can also help locate mineral veins, determine risks to workers and streamline operations,” according to Blondeau.

In addition to making mining more efficient, technology has made it safer.

“It allows us to engineer out hazards and risks to ensure we work safely and keep people out of danger,” according to Blondeau. Drones, for instance, “keep people away from aspects of operations that are at heights or in hard-to-reach places.”

Florence Copper in Florence is a different kind of project. It is designed to remove copper from the ground using in situ.

In situ is a process in which a mixture of water and sulfuric acid is pumped underground to where copper has been found in bedrock. The solution dissolves the copper, and the resulting copper-rich solution is pumped back up to the surface. The solution is then processed to remove the copper.

In situ only works with some copper deposits.

“We are able to do in situ recovery because we have a really rare deposit in Florence. The copper deposit is broken up by nature. It’s a fractured deposit,” said Florence Copper spokeswoman Stacy Gramazio.

Florence Copper is building a “production test facility,” a small in situ operation to demonstrate to regulators such as the EPA and ADEQ that the copper can be removed without damaging the environment.

The project is still waiting on some of the permits it needs from regulators to start full-scale operation, Gramazio said.

Presently, the operation is expected to create 170 jobs at Florence Copper and 75 more at a drilling company Florence Copper has contracted with, Gramazio said. A study by ASU estimated 800 direct and indirect jobs.

The project has encountered opposition from the town of Florence and from many residents. In June 2019, the Maricopa County Superior Court ruled that Florence Copper has the right to mine the land it owns and that the town must pay the company $1.7 million in legal fees.

Residents like Karen and Mike Shoppell of Florence have long been concerned about possible negative effects such as water contamination, excessive water use, property values, air quality and unsafe evaporation ponds, as they wrote in an email to PinalCentral.

“We small-voice taxpayers are being smothered by the ADEQ and the EPA that the mine is a done deal and we, opponents of the mine, should just remain silent and go on accepting the inevitable,” Mike Shoppell wrote.

The operation is expected to pull 85 million pounds of copper out of the ground every year for 20 years. After that, the wells can be removed and homes built right on top of the land, just as though there was never a mine there, Gramazio said.

“There are some unique advantages you don’t see at a typical mining operation,” Gramazio said. “There’s the opportunity for a second life to this land when we are done.” | PW