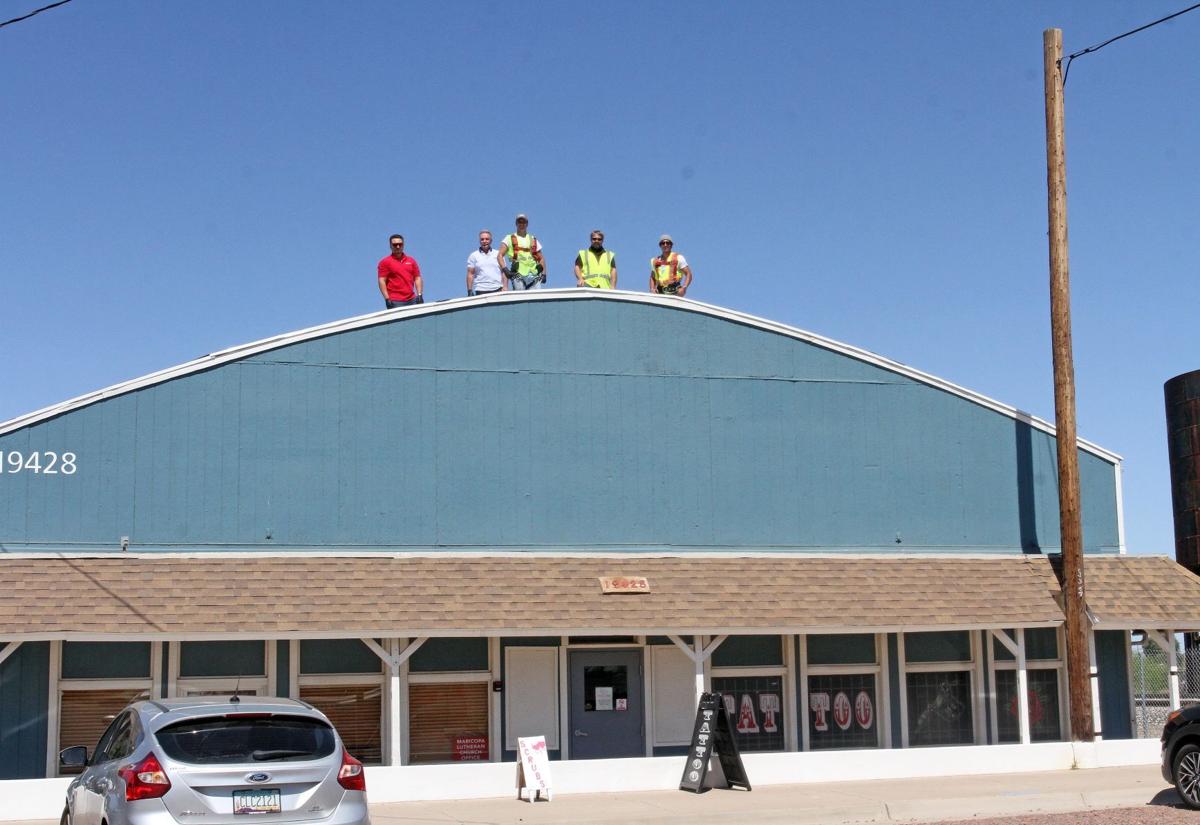 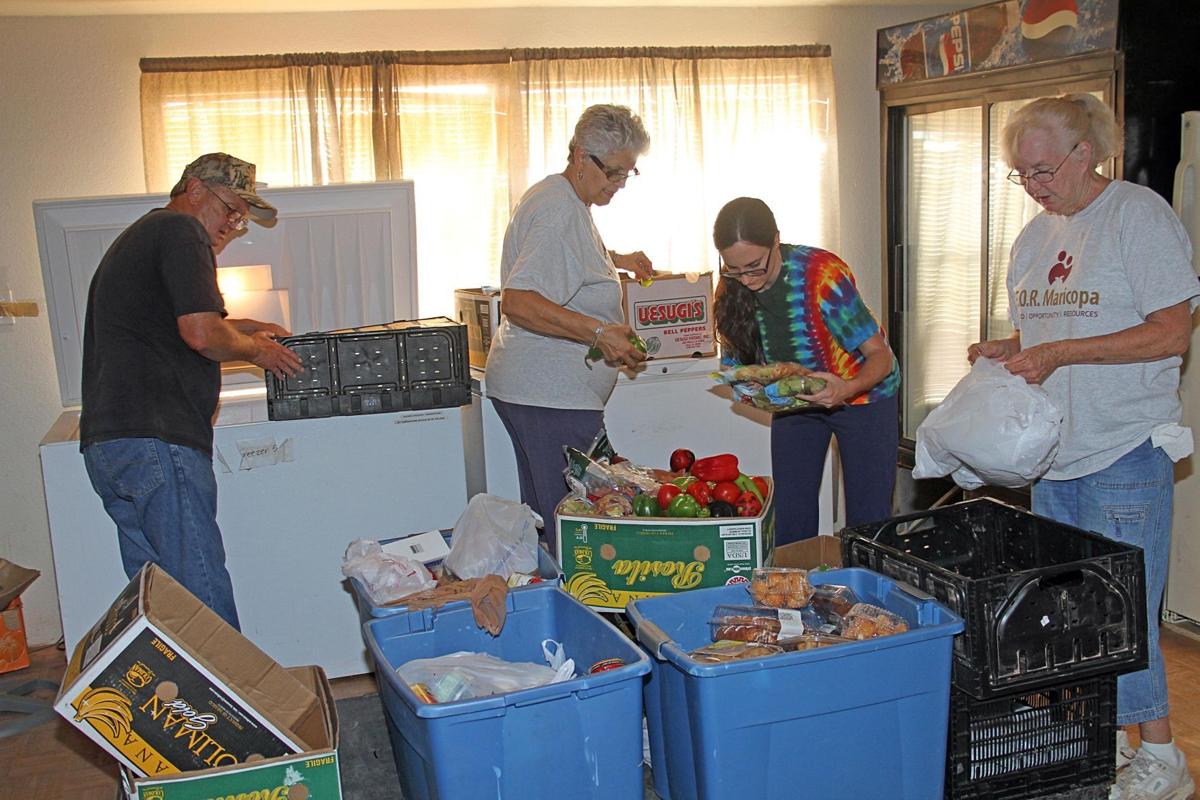 Volunteers work for the F.O.R. Maricopa food bank when it was located in a double-wide trailer. 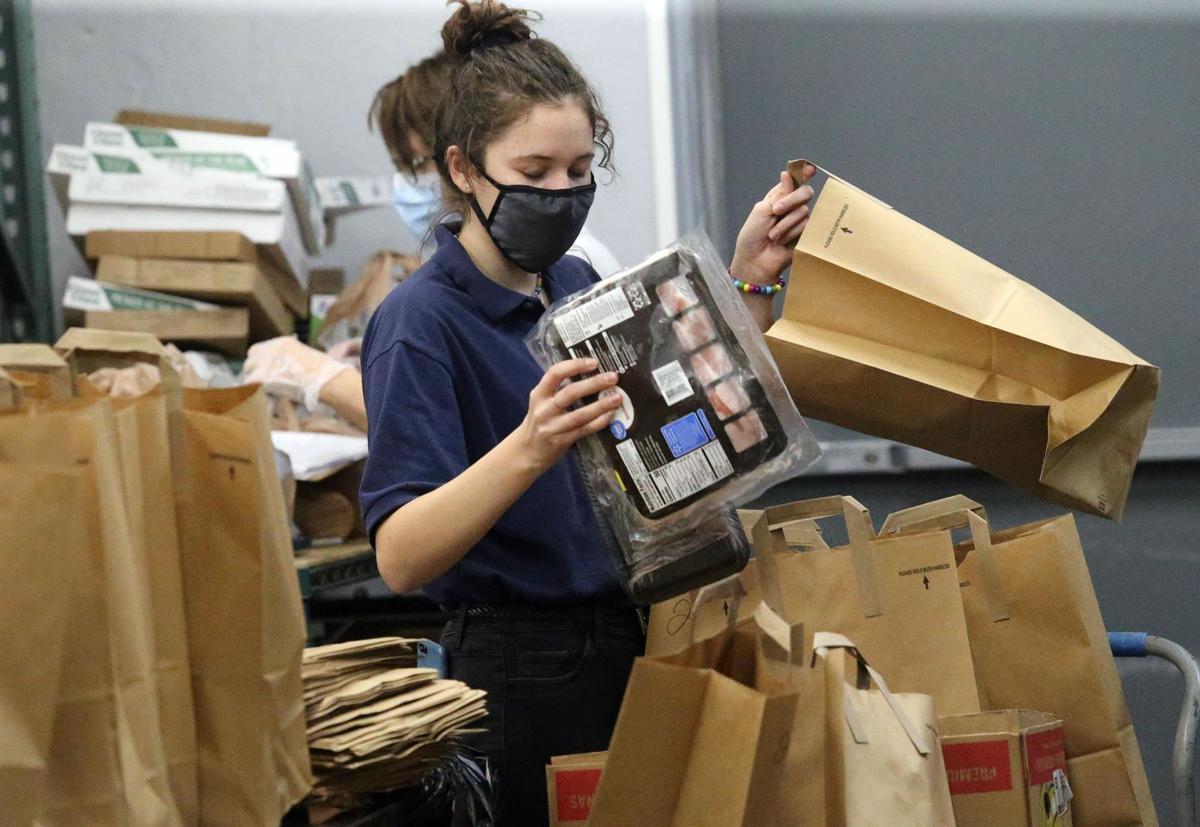 Volunteers at F.O.R. Maricopa prepare bags of goods for distribution at the food bank on Nov. 19. 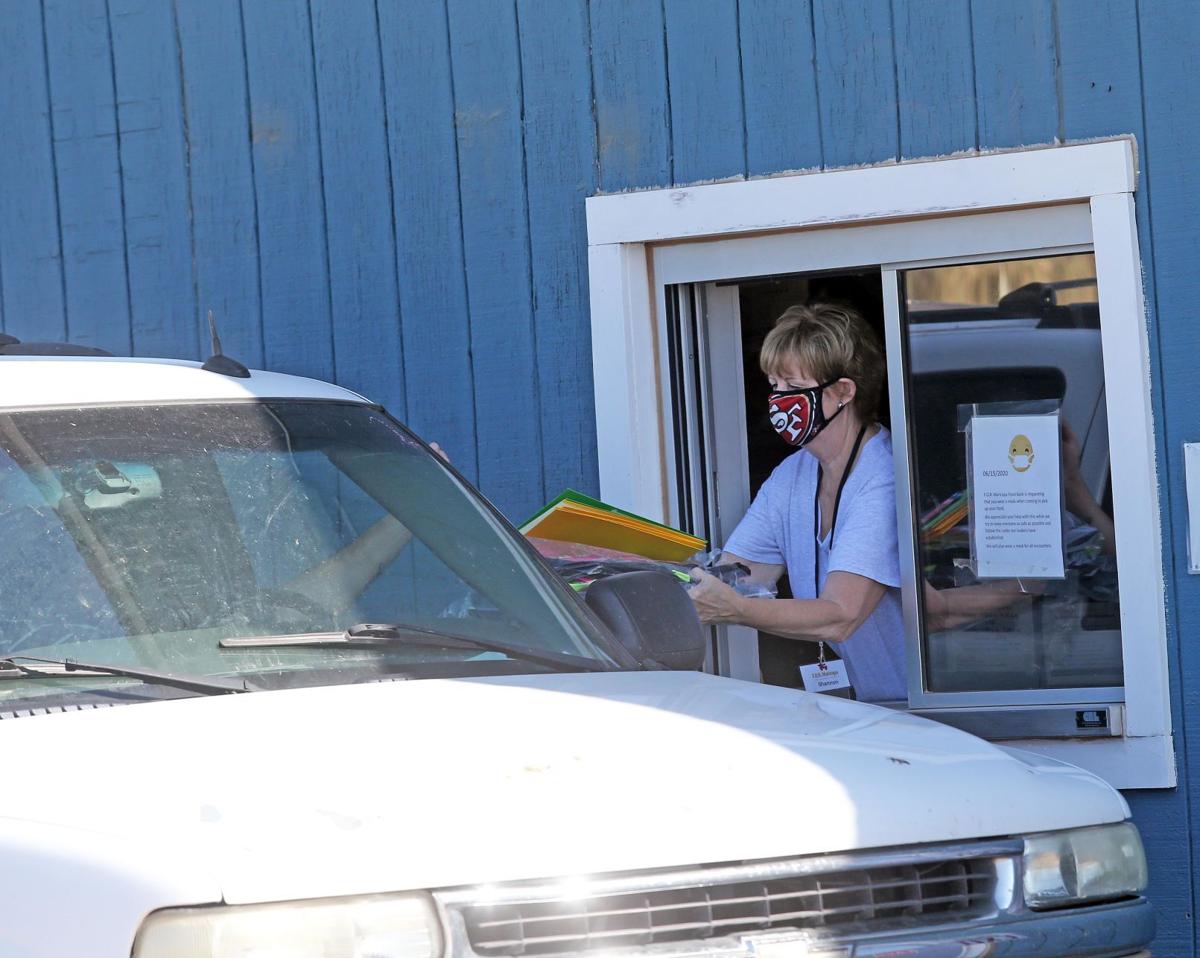 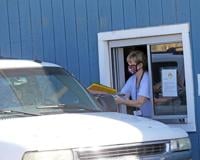 Backpacks and school supplies are distributed from the F.O.R. Maricopa food bank on Aug. 15.

Volunteers work for the F.O.R. Maricopa food bank when it was located in a double-wide trailer.

Volunteers at F.O.R. Maricopa prepare bags of goods for distribution at the food bank on Nov. 19.

Backpacks and school supplies are distributed from the F.O.R. Maricopa food bank on Aug. 15.

You might have seen the phrase hung up on walls at a diner or in a well-stocked house: “Home is where the food is.” The problem in Maricopa was that the food itself didn’t have a home, a permanent one anyway, until now.

For over a decade, the F.O.R. Maricopa food bank has been moving from place to place, setting up shop wherever somebody would let it. It never found a spot that felt permanent, though, one where it could grow its infrastructure to meet the needs of an ever-increasing population.

That changed in 2019, when Director Wendy Webb got the keys to the big barn on State Route 347 by the railroad tracks where the overpass now crosses. Finally, she and everyone else at the food bank had something worth pouring money into, to make it a place to serve those in need throughout the Maricopa area.

“I feel like I’m invested in something now,” Webb said. “I refer to it as our forever home.”

Webb still remembers 2007, when this journey started, and Maricopa was just blossoming into a big city. At that time, there was some help with food needs, but mostly people would call church to church to see if anyone had an ability to help.

Around then, Webb was working with Community of Hope Church, which was taking some of those phone calls. The church wanted to get more involved in the community, so Webb and now-City Councilwoman Nancy Smith proposed the idea of starting the city’s first food bank. The idea took off, and volunteers started making home deliveries.

Soon, demand became too high for that method of distribution, so they then parked in front of the Fry’s grocery store and handed out food from the back of their vehicles. Supplies would come from various sources, including an annual food drive held by California Pools. Webb remembers having to keep all the food in a storage room at her house.

Then, as if the demand for food wasn’t enough, the economy crashed in 2008, and Maricopa was hit as hard as any community in the country.

“Everything bottomed out the next year,” Webb said. “The need really went insane. There were so many people we had to figure out how to work a system. I operated out of an Excel spreadsheet.”

It was then the food bank moved to its first actual location, in a double-wide trailer in the Seven Ranches area off Gunsmoke and Honeycutt. They added some storage units to the site, which came in handy when Bashas’, Fry’s and Walmart all started donating food that hadn’t been sold. By 2010, Costco was providing enough bread and desserts to go around, filling the domestic refrigerators that were lining the trailer.

At that point, the food bank was serving 200-250 families each day it was open. On bigger occasions, such as Thanksgiving, the Chamber of Commerce allowed them to hand out frozen turkeys from its offices.

Not until 2012 did F.O.R. have its first potential permanent home, although in an unlikely location. The city jail had become vacant following the transfer of those services to other buildings, and the city figured that instead of housing prisoners, maybe it might work to house food. So after the connected courthouse was demolished, the food bank moved in.

Webb recalls all the work that had to be done on that property. All 1,700 square feet of it needed renovations and to be brought up to code. The food itself was kept in the main holding cell, with the four individual jail cells in the back used for storage. They did get their first ever walk-in freezer, which was attached to the back.

Then, fate took out another piece. It was long feared that if the SR 347 overpass ever came to be that the jail building would have to be demolished because it ran across the planned alignment. If that was the case, though, it was believed to be well in the future. However, some surprise funding came in that required the overpass be built as soon as possible. Suddenly, the food bank was once again on the verge of homelessness.

“We were still trying to raise money we used to renovate it,” Webb said. “We weren’t even looking for space because we thought we had at least five more years.”

Anyone looking to start a business in Maricopa — or even find a home these days — knows what it was like after that. There was nothing around town ready for a food bank to move in, and anything that could be found was so expensive that they might as well have built a new facility, which would have cost about a million dollars.

Webb said she had her eyes on the barn for about six months before anything happened. She said there were plenty of nay-sayers when she brought up the idea of purchasing it, but still she eventually got a loan from Great Western Bank and the whole massive structure belonged to the food bank.

“I just kept visiting the barn thinking there had to be a way it would work,” she said. “People kept telling us not to invest in it because we would have to tear it down and build it back from scratch.”

That, however, didn’t mean it was ready to be used as a food bank — far from. There were still years of renovation needed before it could support a large operation. So at first F.O.R. operated out of a church for six months, then moved to Santa Cruz Elementary for two years until the school needed every room for its growing enrollment.

Meanwhile, church groups, Boy Scout troops, Harrah’s Ak-Chin and many other volunteers worked tirelessly to make the barn safe for use. Gene and Dana Bischke were there almost every day doing whatever they could. The biggest challenge was the roof, which was leaking everywhere and required constant patching in order to be done right. Getting the electric system and fire suppression done were also big feats. But in all, the biggest challenge was simply finding out everything that was going on with the building, like that only half was built on concrete foundation, and only one side had water.

Some might have said it wasn’t worth it, that the barn couldn’t be saved.

“I certainly had heard that enough times that I felt I was wearing rose-colored glasses,” Webb said. “But we moved forward with it, and I’m a firm believer in just pushing on and that everything will work out. That doesn’t mean I wasn’t on the verge of gray on some days, but we had to do it because that’s where we were meant to be. There wasn’t anywhere else.”

Finally, Webb obtained a temporary occupancy permit to start operation out of the barn in September 2019. By that point, she had already been renting out the offices in the front half of the structure to local businesses, including a tattoo shop and the Maricopa Monitor newspaper. That was key in bringing in revenue to fund the major renovations required to bring the barn up to code.

They started having the first drive-thru distributions around that time, something that became key once COVID-19 hit the community only a few months later. Especially in those early days of the pandemic, it was hard to make people feel safe in situations like that, but the drive-thru method helped.

Webb credited the city of Maricopa for stepping up to help get the food bank up and running in the barn, working with them on the permit process among other ways. She said previously there had been the impression that the food bank was just another business, but now it’s clear the city views it as more than that.

“I think it’s a combination of all the number of volunteers and the caring our volunteers have, along with the outreach from our city,” Webb said. “We didn’t always know we were going to survive, but somebody always came through for us. When I look back on it all, I’m amazed. It would have failed so many times if we didn’t have the right people and the right attitudes.”

She said running a food bank in the time of COVID has been tough, but not new. The role of an organization like F.O.R. is to flow in the same direction as the community it serves, through the good times and the bad. In Maricopa, that means knowing nearly everyone is living off two incomes, and if one of those people were to lose a job due to the pandemic that the need for food would rise. F.O.R. is there for that.

There is still some work to be done on the barn. They need to figure out how to bring more power supply to the building, and the parking lot has to be finished with landscaping. Webb hopes the proposed pedestrian bridge on Maricopa Road, the new name for where the barn is located, will bring more foot traffic from other parts of the Heritage District.

But whatever happens, F.O.R. now knows it has a place to stay, finally, so people in Maricopa know exactly where to go when they are in need.

“As much as we would love to be put out of business, because there isn’t a need for it,” Webb said. “But I don’t know when that will ever be.” PW