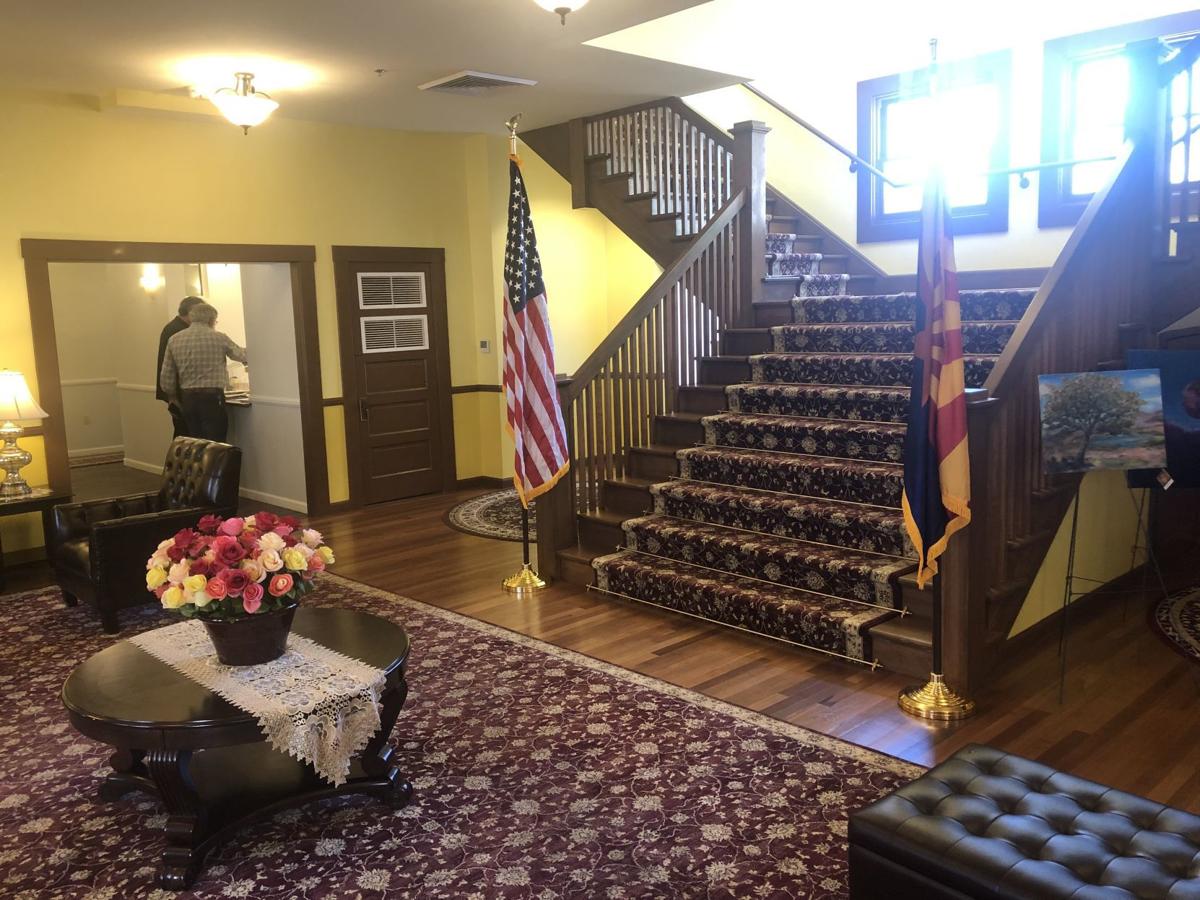 The lobby of the Hotel Magma in Superior includes custom-made rugs. 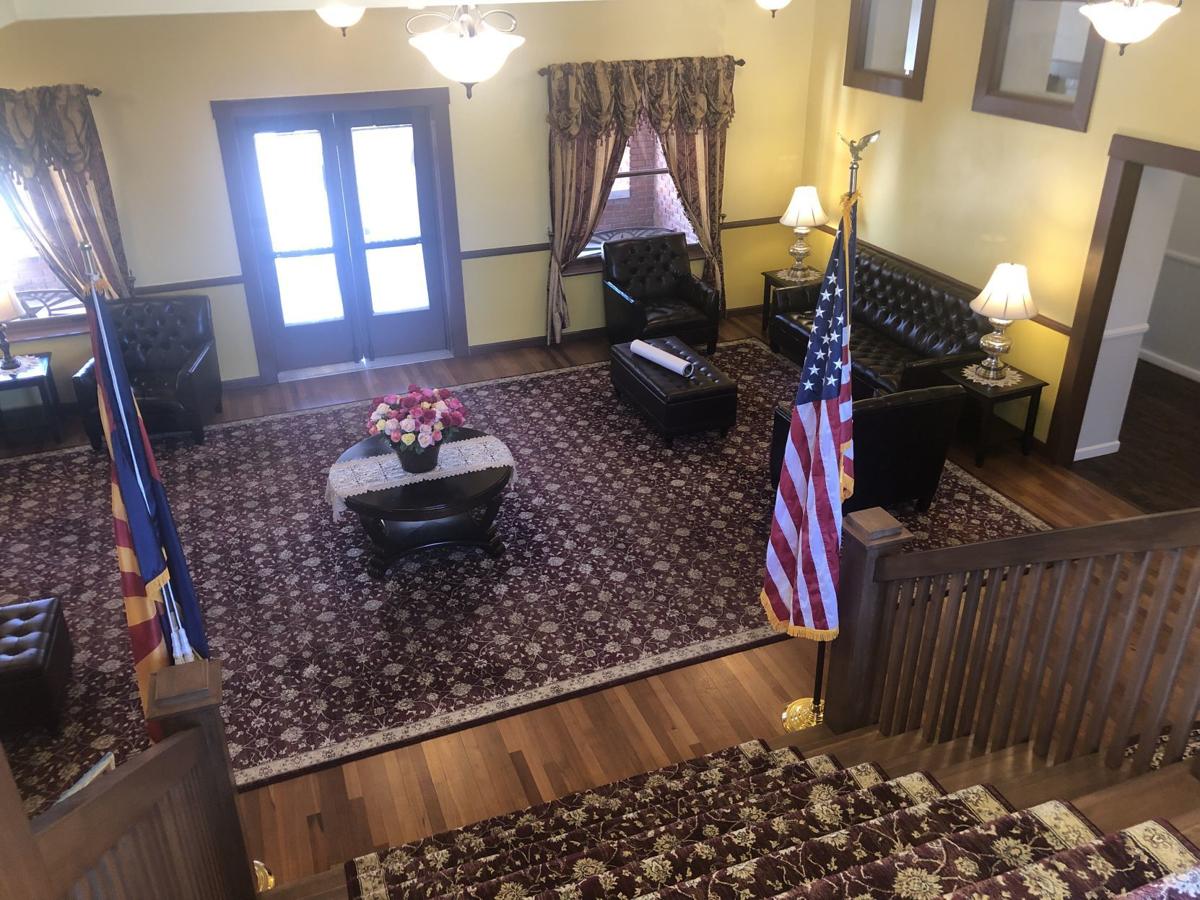 The lobby of the Hotel Magma in Superior includes custom-made rugs, fresh paint and leather couches. 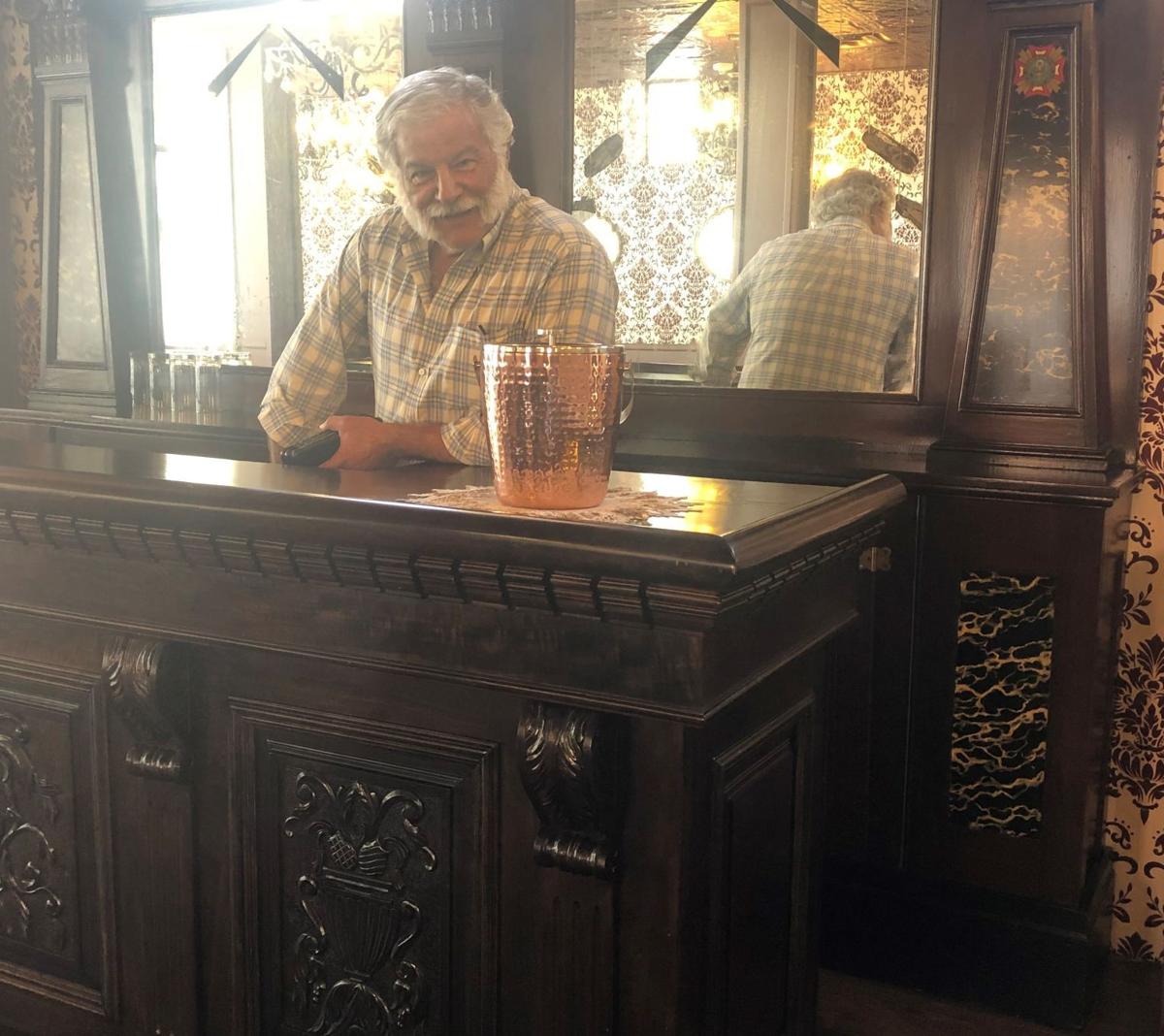 Miguel Sfeir, manager of the Hotel Magma in Superior, poses behind the hotel’s bar. 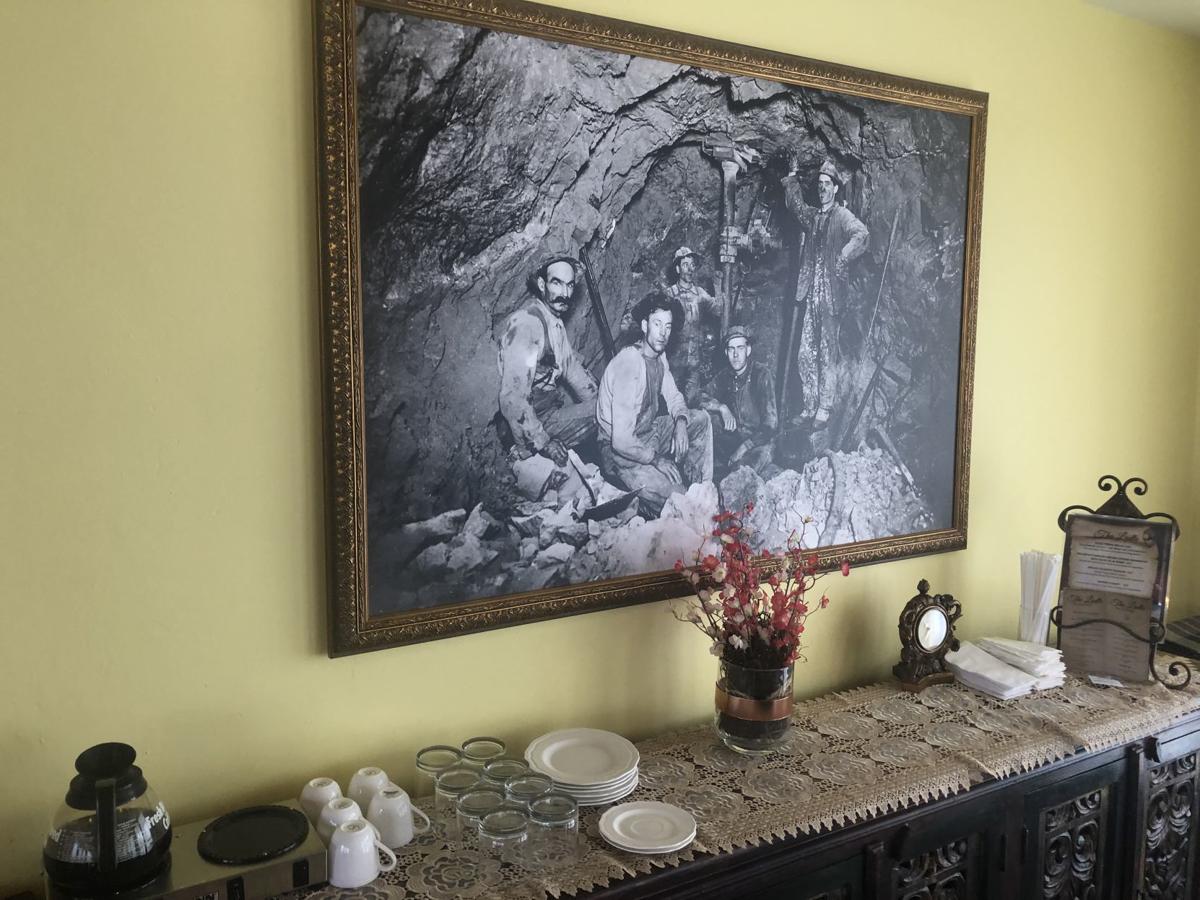 This photo at the restored Hotel Magma in Superior illustrates the town’s mining history. 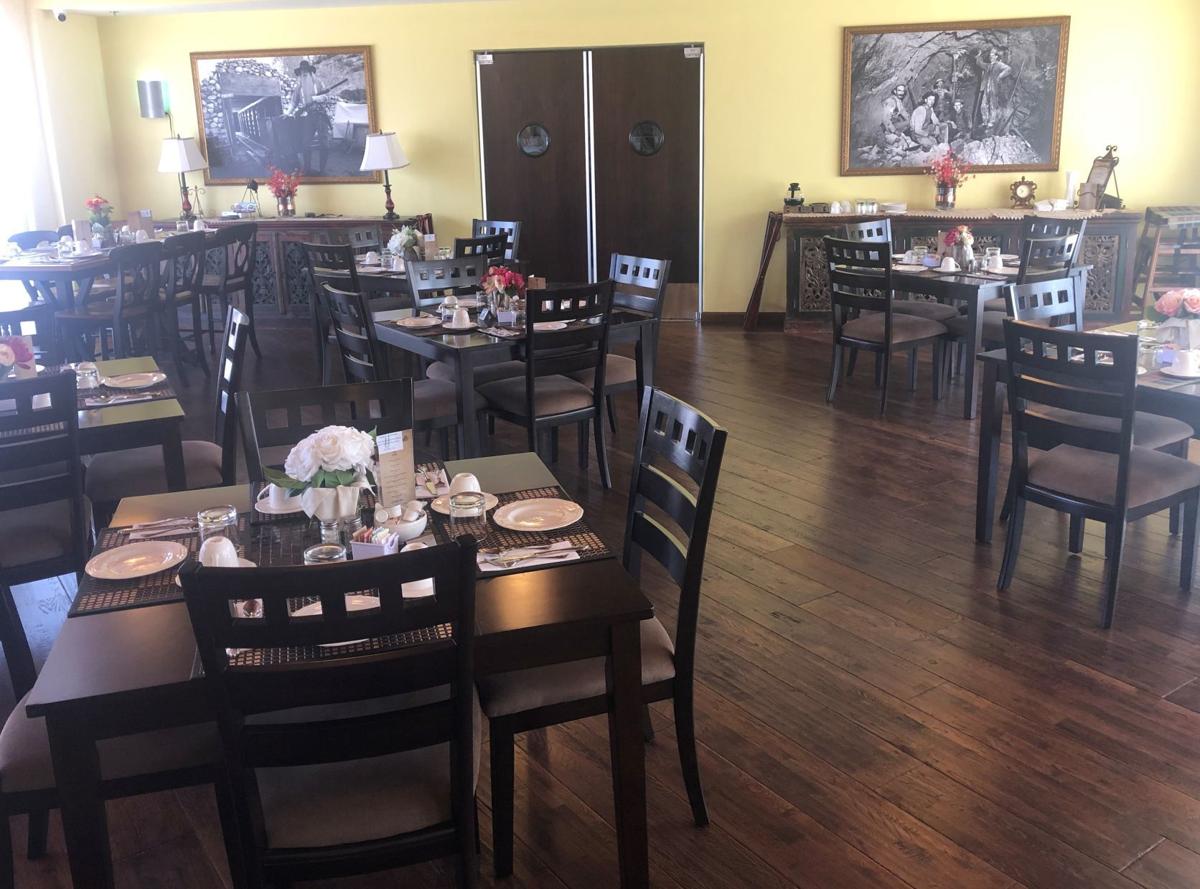 The Ladle, named after a mining tool, is the Hotel Magma’s restaurant. 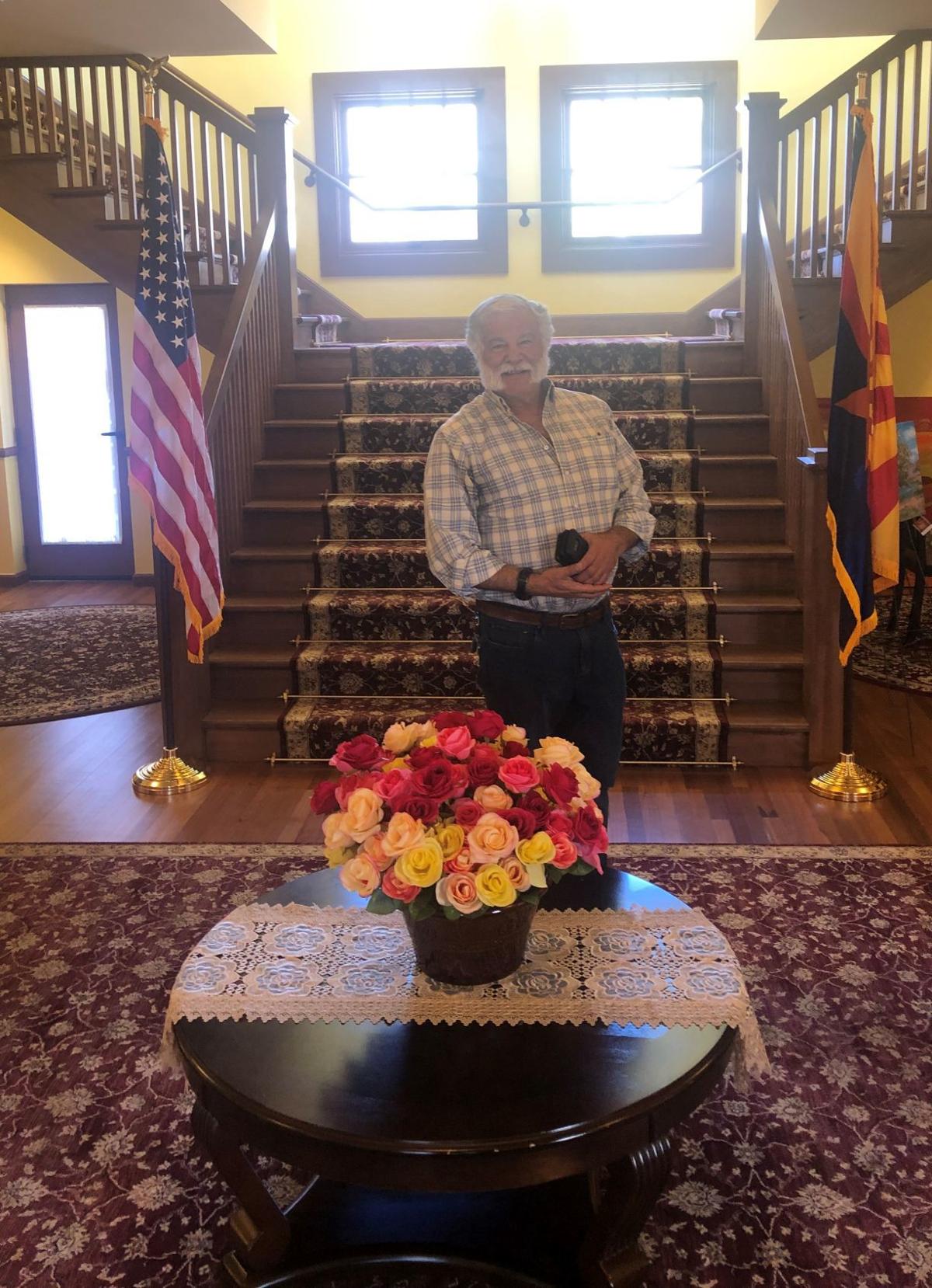 Manager Miguel Sfeir poses in the lobby of the restored Hotel Magma in Superior. 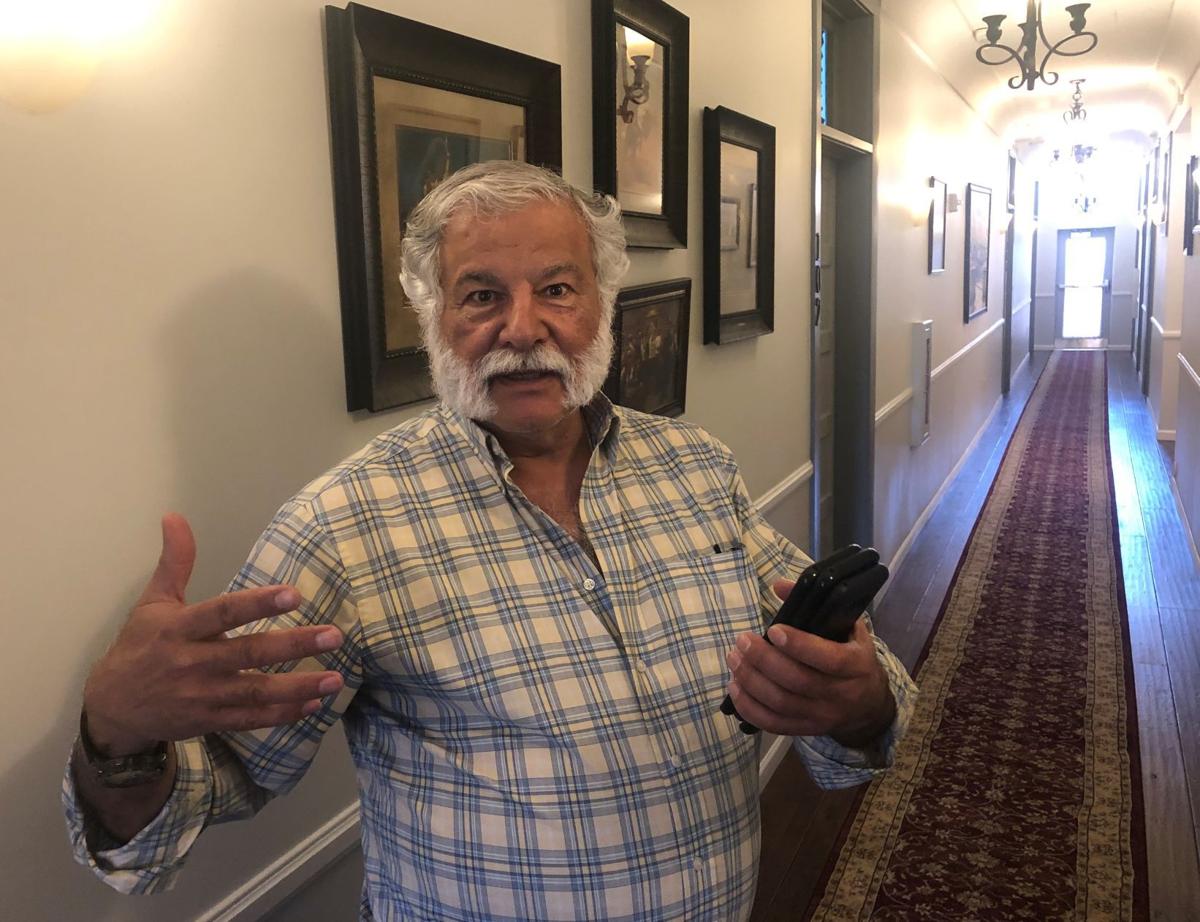 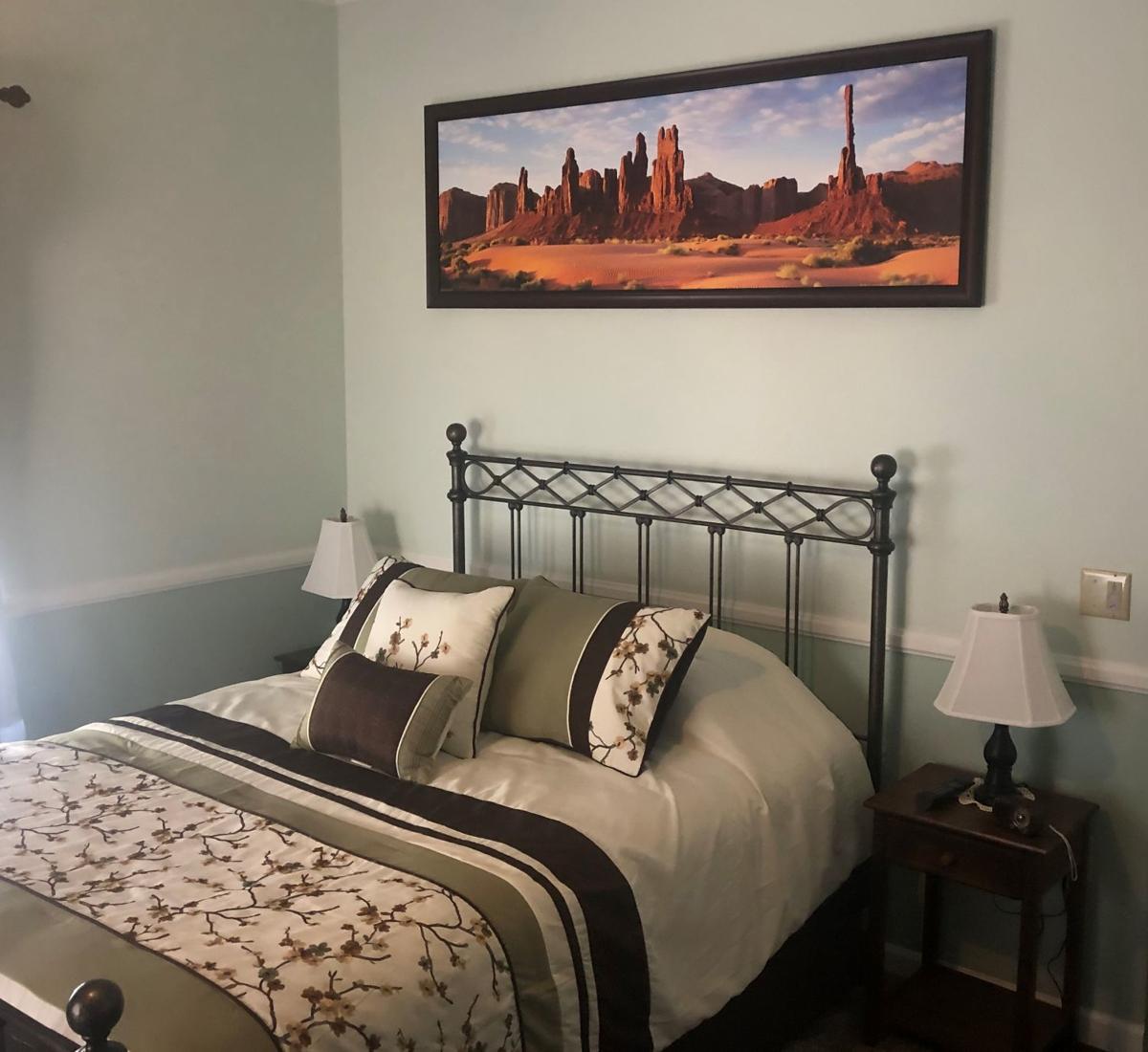 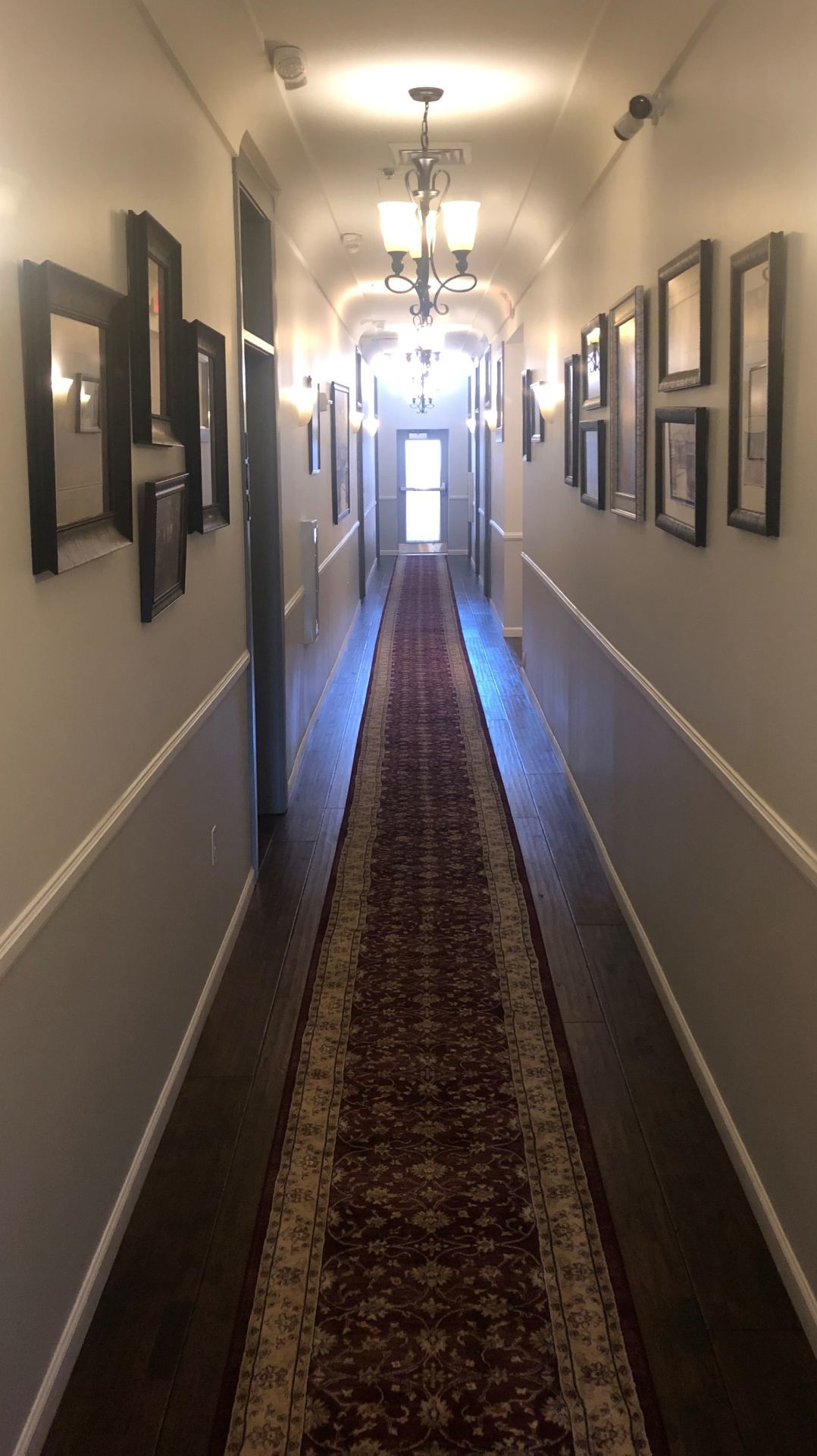 Light shines into the hallway at the Hotel Magma in Superior. 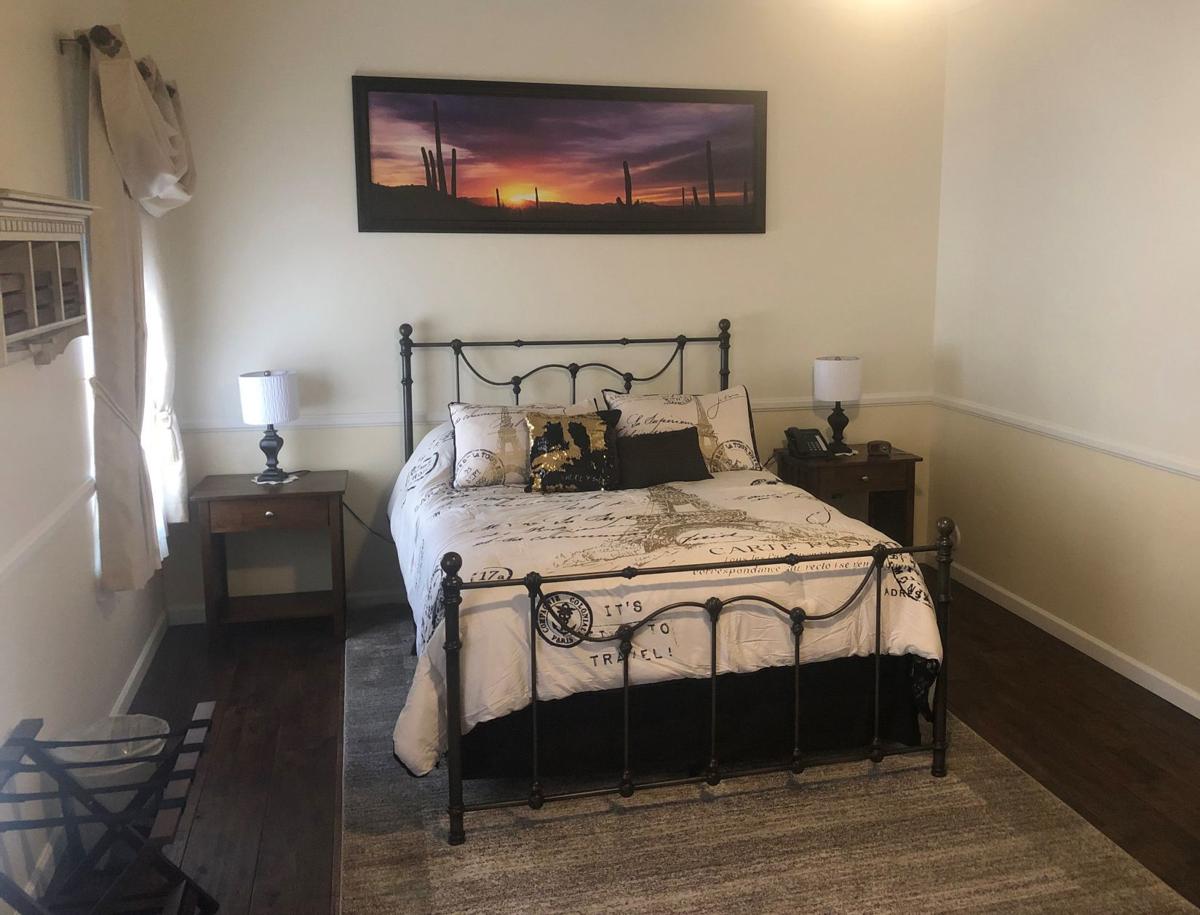 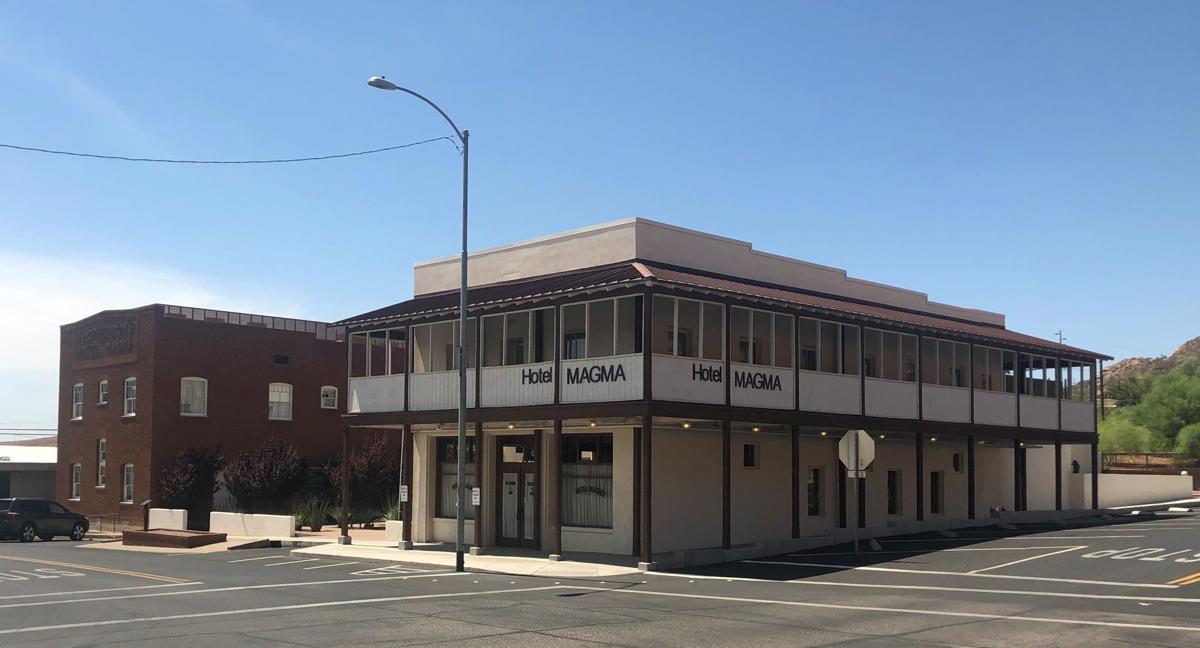 The Hotel Magma in Superior. 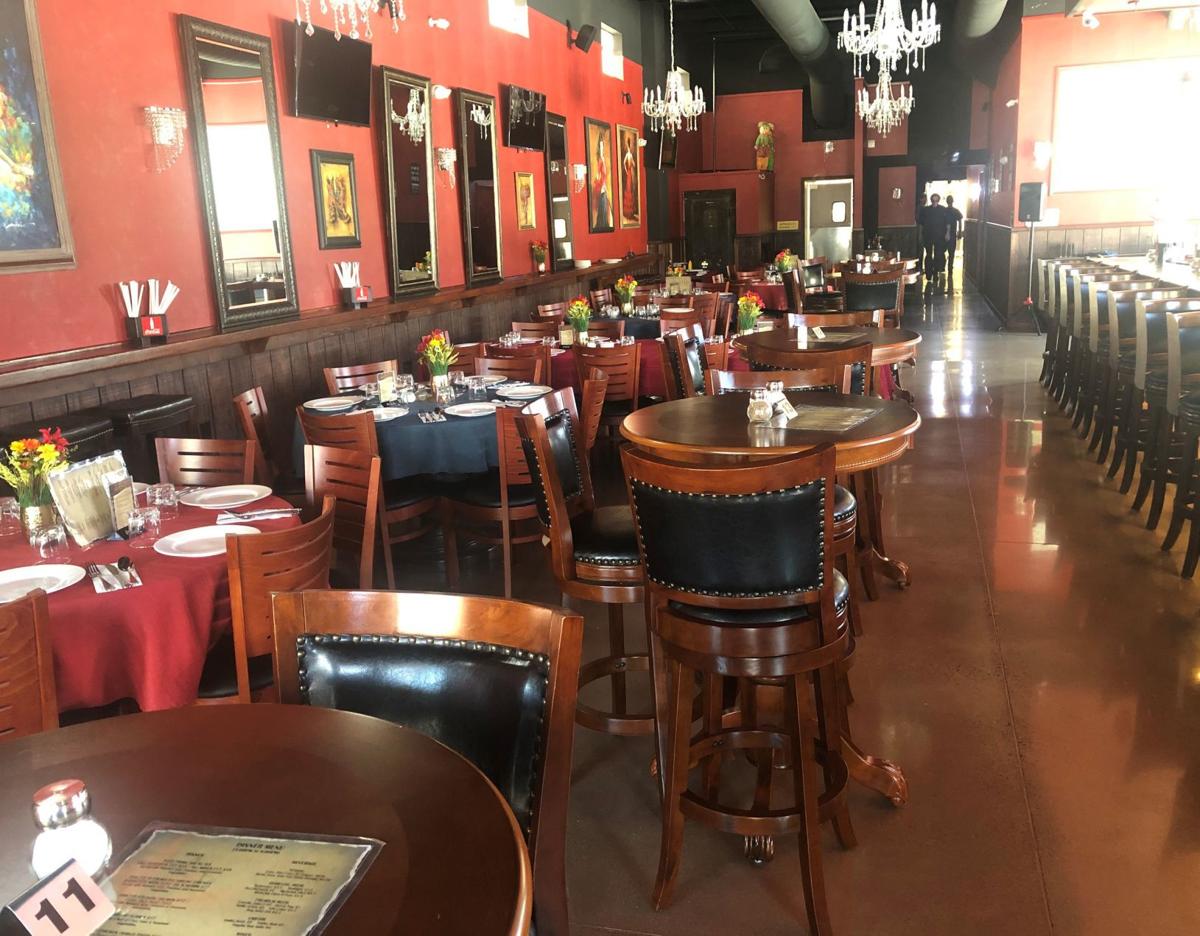 Barmacy, a former pharmacy, is a restaurant and bar across the street from the Hotel Magma in Superior. It is also managed by Miguel Sfeir.

A ladle hangs on the wall outside the restaurant at the Hotel Magma in Superior.

The lobby of the Hotel Magma in Superior includes custom-made rugs.

The lobby of the Hotel Magma in Superior includes custom-made rugs, fresh paint and leather couches.

Miguel Sfeir, manager of the Hotel Magma in Superior, poses behind the hotel’s bar.

This photo at the restored Hotel Magma in Superior illustrates the town’s mining history.

The Ladle, named after a mining tool, is the Hotel Magma’s restaurant.

Manager Miguel Sfeir poses in the lobby of the restored Hotel Magma in Superior.

Light shines into the hallway at the Hotel Magma in Superior.

The Hotel Magma in Superior.

Barmacy, a former pharmacy, is a restaurant and bar across the street from the Hotel Magma in Superior. It is also managed by Miguel Sfeir.

A ladle hangs on the wall outside the restaurant at the Hotel Magma in Superior.

Miguel Sfeir remembers the first time he visited the small town of Superior. He had driven by on Highway 60 while riding his motorcycle, and a friend, Curtis Pierce, had a connection to the town and recommended Sfeir take a look. Sfeir exited the highway and drove down Main Street, past the old buildings that had seen better days.

When Sfeir arrived at the corner of Magma Avenue and Main Street, near the end of the road, he stopped. He took a look at the three buildings on the northwest corner. One was made of brick, one adobe and one concrete, at least what was left of them. The outside was covered with weeds. Inside, paint was peeling and trash was everywhere. Vandals had smashed the toilets and sinks. The ceilings in two of the buildings leaked. The other — the adobe building in the middle — didn’t have a ceiling.

“It was,” Sfeir said, “a mountain of rubble.” And yet, he was “attracted to the two buildings here,” the east and west building, he said.

The Chile native and resident, in addition to being a pilot, computer engineer and businessman, had experience in property development and construction. He developed and owned an Arabian horse ranch in Scottsdale and was looking for another property in which to invest.

He did some research and discovered a few things. First, the structures were listed on the National Register of Historic Places. Second, although the mines had been closed for years, geologists say that one of the largest copper deposits in the world is located deep underground near Superior. It wasn’t certain at the time, but Sfeir decided that an active mine would likely return and lift the local economy. He also noticed improvements were being made to Highway 60. He thought Superior’s future looked up.

“With that in mind I said, ‘let’s do it,’” Sfeir said. His company Los Cedros Superior LLC bought the property and started on the task of transforming the “mountain of rubble” into a restored historic hotel.

It would take eight years.

In a town as small as Superior, people couldn’t help but notice that something big was happening at the corner of Magma and Main. As the hotel got closer to completion, the buzz grew.

“It sat in ruins for so long, and it was quite an uncomfortable sight to see,” said Mayor Mila Besich-Lira. “We were all anxiously awaiting the hotel to open.”

The public got an early look in January of this year at the 11th annual Superior Home and Building Tour. Last year’s tour attracted about 800 people. This year there were 2,000.

“I’m sure it was because of the hotel,” said Sue Anderson, president of the Chamber of Commerce.

The guests weren’t disappointed. The courtyard is landscaped with plum and palm trees and yucca, and it features newly laid pavers. The inside looks like something from a postcard, from the lobby through the dining room and tea room and bar. There is also a roof-top patio, second-floor veranda and the 21 guest rooms. The hotel is decorated in a way similar to what it was when it was built, Sfeir said, including the custom-made rugs in the lobby.

“No details were spared in that hotel,” Anderson said. “He hand-picked every single thing, the carpet, the chandeliers. He traveled all over the United States, staying in historic hotels to get ideas.”

The hotel opened for business on March 1, Sfeir’s birthday. The restaurant inside, the Ladle, began serving breakfast, and later dinner, experimenting with different menu items. The computer engineer is building a permanent menu by inputting orders into a computer to find the most popular choices.

“The hotel itself is magnificent. People love it,” said Anderson, before adding that it’s a bit pricey for some in town.

On June 7 Sfeir opened Barmacy, a former pharmacy but now a bar and restaurant, across the street from the Hotel Magma. Barmacy is designed to be a little more raucous than the tea room in the hotel. It has an outdoor patio ideal for live music.

Some locals have come for breakfast every day since it opened, Sfeir said. The hotel guests are a mixture of people in the mining business and people coming to town on pleasure, often to visit family.

Two of the world’s largest mining companies, Rio Tinto and BHP Billiton, are developing what could be the biggest copper mine in the United States. The Resolution Copper project near Superior won’t officially open for years, but it’s active, with engineers digging and collecting data.

Resolution Copper will create “thousands” of direct and indirect jobs, project spokesman Kyle Bennett told Pinal Ways last year, even though the mine will utilize robots in addition to people. The project has faced opposition, but it’s still on track.

“This town is completely coming back to life,” Sfeir said. “I think we contributed a lot to that.”

Anderson said the Chamber has seen more investors coming in asking questions about buildings in the area, and traffic at the Bob Jones Museum downtown was up 48 percent from 2017 to 2018.

“Superior has been going through its own renaissance over the last five to six years,” Besich-Lira said. “The hotel was part of that. It will encourage additional growth and investment in the community.”

Downtown is changing, with other improvement projects and the installation of Tesla charging stations, Anderson said.

Turning a trash heap laced with asbestos and lead-based paint into functional buildings that can pass modern-day inspection is difficult enough. It’s even tougher to do it in a way that maintains the structures’ historic status. The east and west buildings, built in 1910 and 1923 respectively, were listed with the National Register of Historic Places in 1994.

“Do it right and you keep your (historical) record, do it wrong and you lose your record,” Sfeir said.

It took seven months to remove all the asbestos, a mineral used in old buildings that was later found to cause cancer. Lead-based paint could be removed from the walls, but not from doors or windows because they absorbed so much of it in the last 100 years. The only option was to replace the more than 400 doors and windows. To conform to historical standards, Sfeir had the doors and windows manufactured one by one in his home country of Chile. Wood had to be found to replace the damaged wood in the floors.

“We are honored to have Miguel make that investment,” Besich-Lira said. “It’s the only building in Superior that has a historical designation. He put in the extra effort to preserve that.”

Miners would sleep on the concrete building’s porch 100 years ago. At that time the hotel had eight rooms, but only two of them had private bathrooms. The other six rooms and the porch shared a bathroom. To run the building as a hotel in 2019, each room needed its own bathroom built.

Meeting the requirements for the historic register means following federal, state and county guidelines, and a lot of back-and-forth with officials from all three levels of government.

One of the requirements for the historical register is to keep a certain percentage of the original walls. If you knock down walls it’s a not a restoration anymore, it’s a reconstruction. The authorities did allow Sfeir to connect the two buildings, replacing that old adobe structure.

While digging for the foundation, Sfeir knew that if he found archaeological remains the project would have to stop until the remains could be collected and analyzed. Instead, what he found was a tunnel under the road to the business across the street, a former drug store. Two secret rooms underground had air pumps.

“I have heard so many stories about that, I don’t know which of them are real,” he said. “It’s very interesting.” He bought and fixed that up, too. Now it’s the Barmacy. You can’t get penicillin there anymore, but you can enjoy a meal and a drink in a newly decorated and furnished dining room.

Sfeir hasn’t had much time to reflect on what he’s done and what’s happened, but he’s proud. “It’s very satisfying,” he said. And while the deed lists Los Cedros Superior LLC as the owner, really, “this place belongs to the town,” Sfeir said. “Spiritually, this hotel belongs to Superior.” | PW