Harrah’s Ak-Chin Casino has grown over the years. The covered bridge to the right leads to the UltraStar Multi-tainment Center. 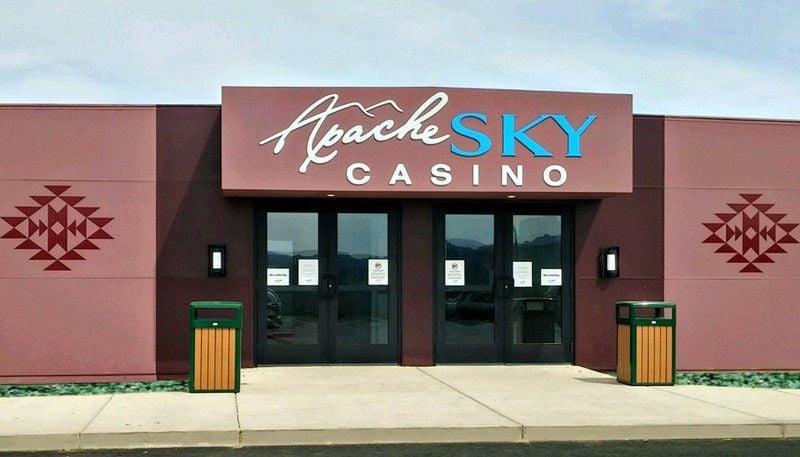 Apache Sky Casino is located near Winkelman off Highway 77. 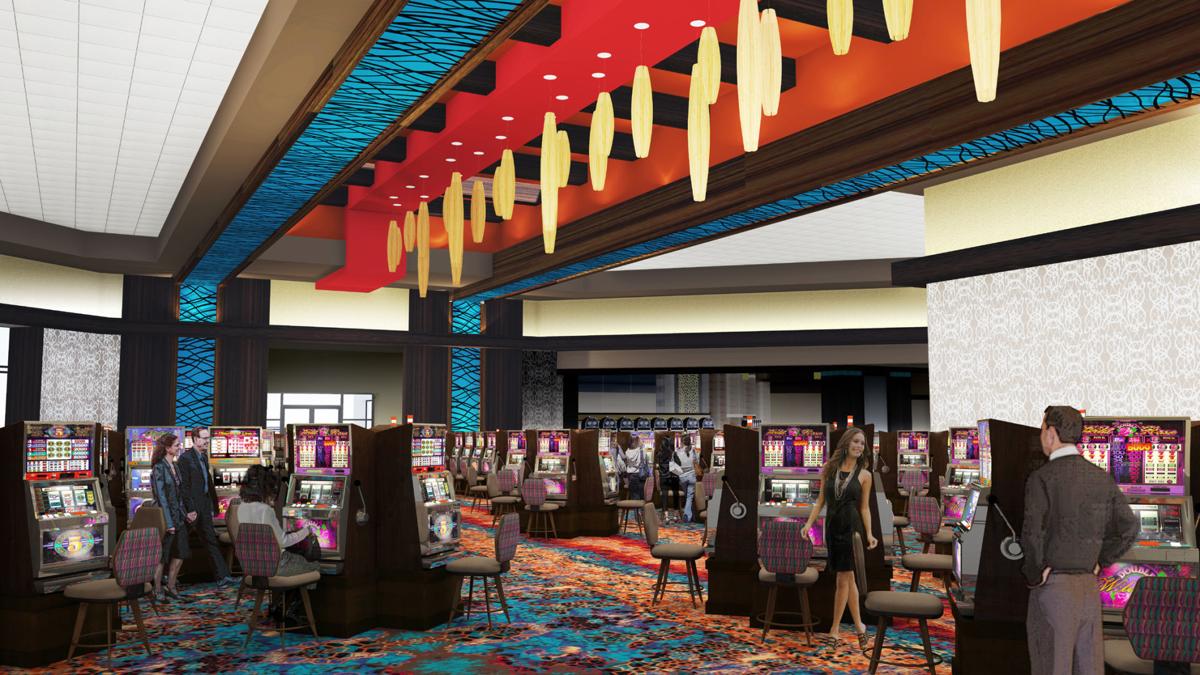 As part of the expansion, the casino will be upgraded to a bigger, more attractive location. 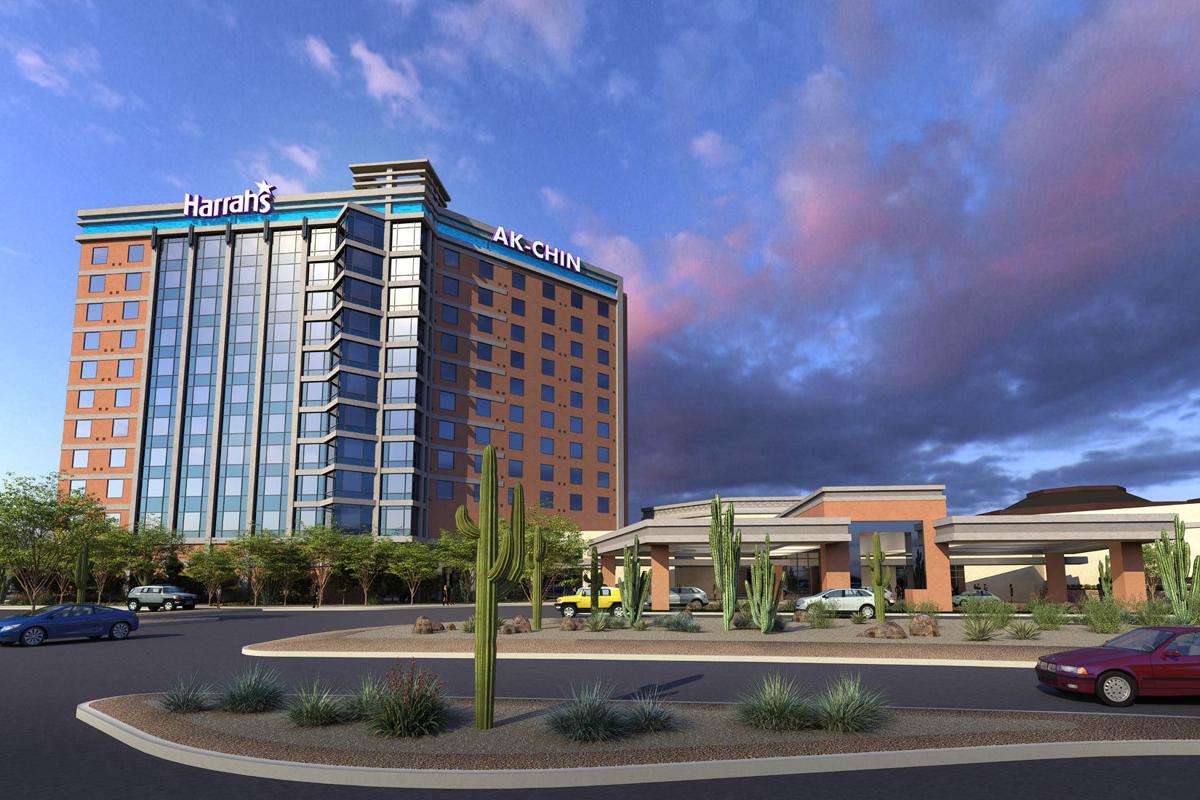 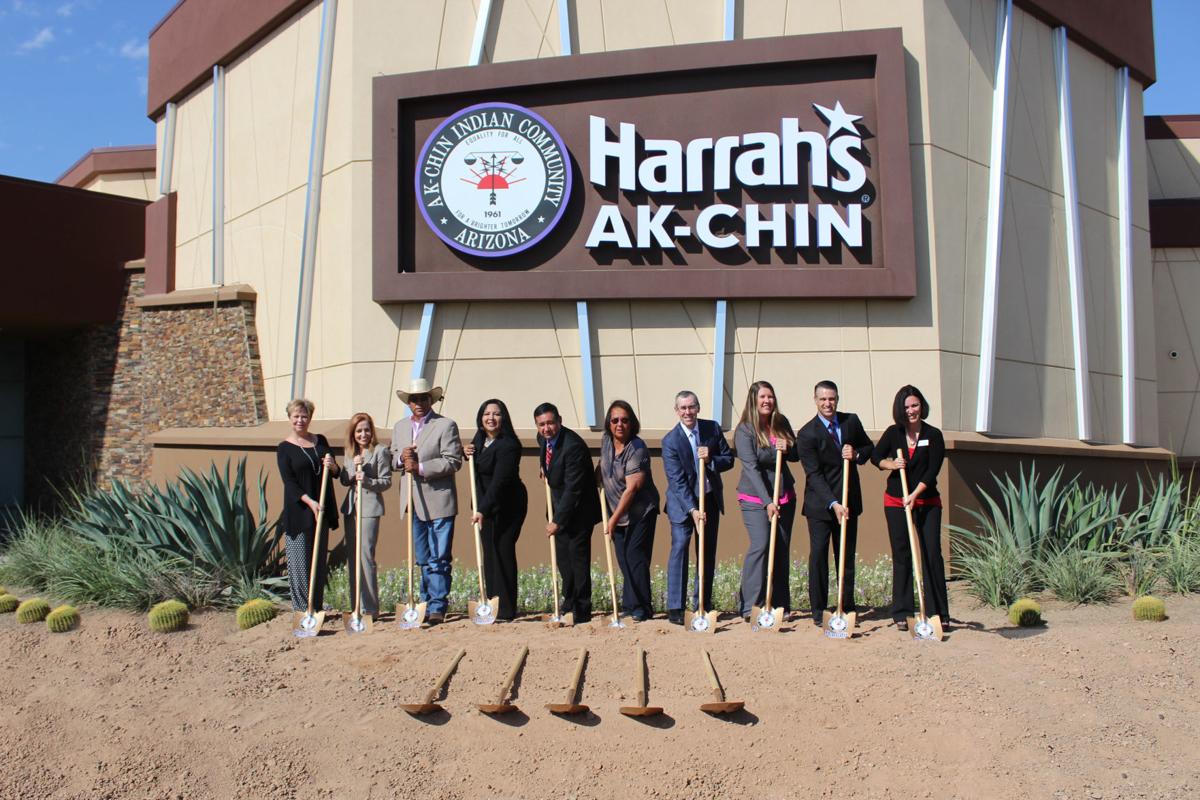 The Ak-Chin Tribal Council takes part in a groundbreaking ceremony for the expansion of Harrah’s Ak-Chin Casino in June 2016. 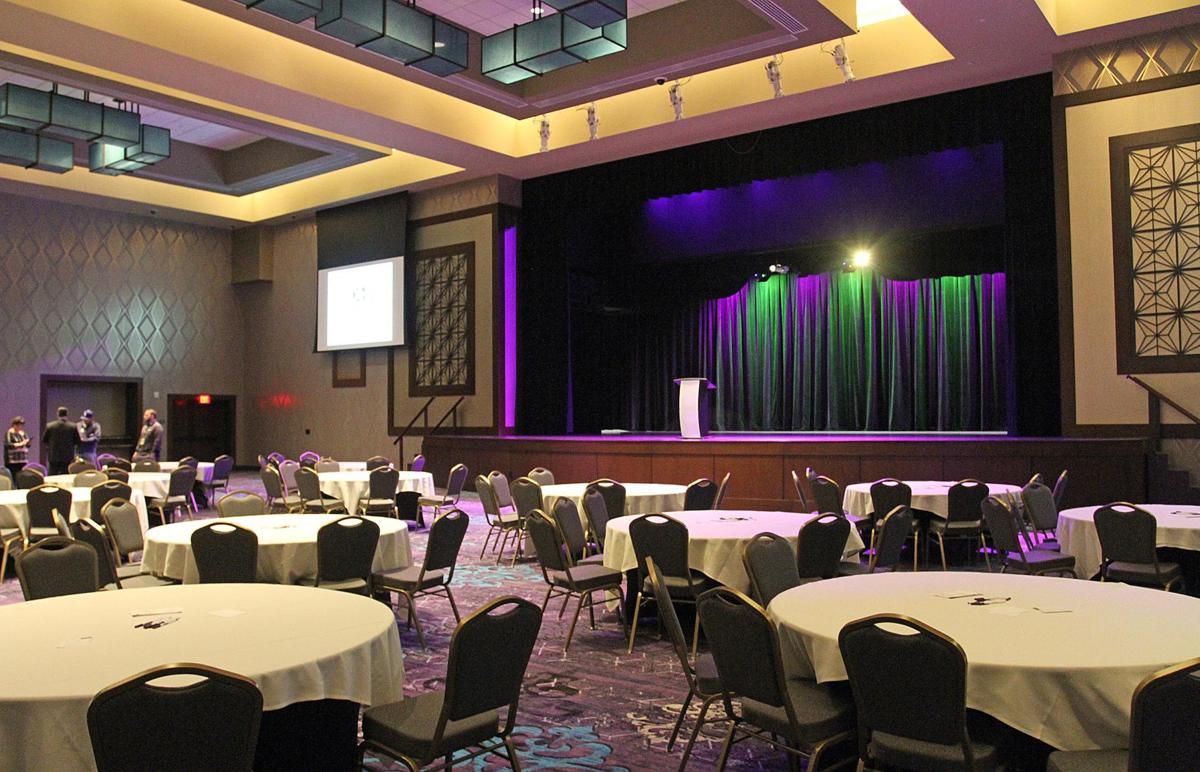 The new concert venue at Harrah’s Ak-Chin will be opening its doors to the public for the first time this Saturday when the casino welcomes The Righteous Brothers. 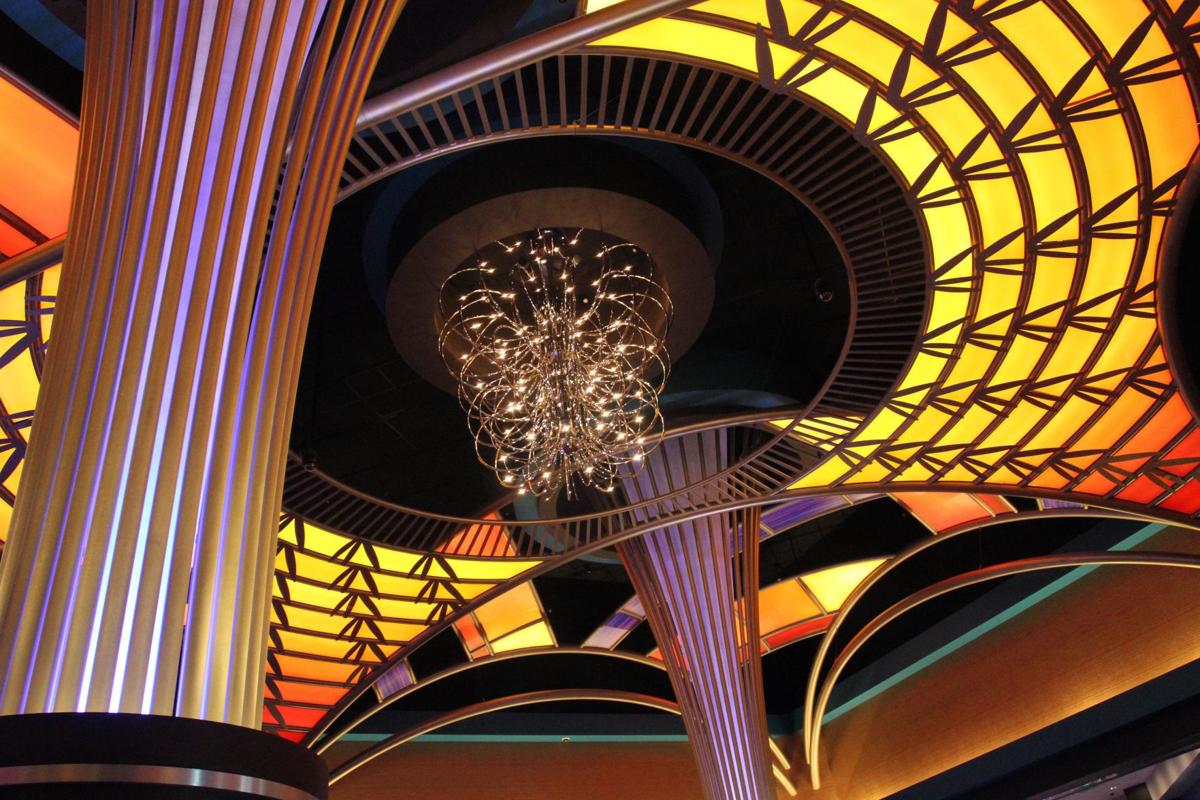 Harrah’s Ak-Chin will soon wrap up its years-long renovation project that has brought a new look to the casino.

Harrah’s Ak-Chin Casino has grown over the years. The covered bridge to the right leads to the UltraStar Multi-tainment Center.

Apache Sky Casino is located near Winkelman off Highway 77.

As part of the expansion, the casino will be upgraded to a bigger, more attractive location.

The Ak-Chin Tribal Council takes part in a groundbreaking ceremony for the expansion of Harrah’s Ak-Chin Casino in June 2016.

The new concert venue at Harrah’s Ak-Chin will be opening its doors to the public for the first time this Saturday when the casino welcomes The Righteous Brothers.

Harrah’s Ak-Chin will soon wrap up its years-long renovation project that has brought a new look to the casino.

In a sense, the people of the Ak-Chin Native American community have always been involved in gambling. Translated, Ak-Chin means “mouth of the wash” and refers to farming that relies on the desert washes in the area. Even today, most of the reservation is covered with agricultural fields.

“Ak-Chin has been well known as being one of the most successful farming communities in the Southwest,” said Robert Miguel, chairman of the community’s governing board. “Farming has always been a gamble. You don’t know if you are going to produce and make money one year to the next.”

In 1994 the Ak-Chin community placed a big bet on economic diversification and hit a jackpot with Harrah’s Ak-Chin. The casino was built on the edge of the reservation near the hamlet of Maricopa to take advantage of the emerging business of Native American gambling in Arizona.

Fast-forward 25 years. The once-lonely casino is bigger, and it’s surrounded by a parking garage and a resort hotel with restaurants, a spa and a concert venue. Next door is the UltraStar Multi-tainment Center, which includes an amphitheater, movie theaters, a restaurant, a lounge, bowling alleys, a game center and an events center. Nearby, Ak-Chin owns the Southern Dunes Golf Course. That hamlet with a population of less than 1,000 in 1994 is now a city of more than 50,000 residents. Well-known names come to perform at the new concert venue.

Miguel thinks about what has happened over the last 25 years as he sits in his office on the Ak-Chin reservation, about 4 miles from the casino and resort.

“I was born and raised here when there was nothing, just farm fields,” he said. “When we bring these concerts here, the last year, year and a half, I run into my old buddies that I went to school with since kindergarten. Here’s Dwight Yoakam, here’s Dave Chappelle, and we sit there. We say, ‘who ever thought Dwight Yoakam would be in our backyard?’”

The tribe made smooth moves, like a farmer who plants at the right time for maximum harvest. Ak-Chin’s decision to wait until 1994 to open a casino allowed it to avoid the growing pains that plagued tribes that got in early.

In 1992 the National Indian Gaming Commission issued rules requiring tribes to have a gambling compact with the state they’re in before operating slot machines. At the time six tribes in Arizona were operating casinos with slot machines without a compact, so Gov. Fife Symington moved to shut down the casinos.

FBI agents raided five of the casinos and confiscated the slot machines. At the sixth casino, Fort McDowell near Scottsdale, agents met resistance. About 100 tribal members using earth-movers and other vehicles surrounded the agents’ vehicles, and an hours-long standoff ensued. It ended when Symington negotiated a deal with the tribal chairman. Later the governor negotiated compacts with 16 tribes, including the Ak-Chin community. After a decade of back-and-forth lawsuits, Arizona voters approved Proposition 202 in November 2002, cementing Native American gambling as a fixture in the state.

With no experience running a casino, the Ak-Chin community did something that no other tribe in the state has done before or since. It hired an outside company with experience in the gambling industry — Harrah’s, now part of Caesars — to manage the operation.

“If the community was going to have some kind of success, because we are in a rural area, we (needed to) look into partnering with a brand name like Harrah’s,” Miguel said. “It’s been a great relationship. ... I don’t think we would have been as successful as we are today without them.”

Neither Ak-Chin nor Harrah’s shares profit or revenue information with the public, but a simple look around shows it must be healthy.

The property’s latest expansion and renovation, which was unveiled in the spring, cost $180 million. The hotel added 230 rooms to bring the total to 530. It upgraded the lobby and spa/fitness center and added a restaurant, wine bar, buffet, concert venue and an indoor pedestrian bridge connecting the casino to the Multi-tainment Center. The pool and parking garage also got upgrades.

“Vegas-style gaming and entertainment has come to Arizona, there’s no question,” Abbie Fink, a spokeswoman for Harrah’s Ak-Chin, told PinalCentral when the additions opened to the public. “Maybe gaming is not your primary reason, but going to see a concert is. You come, see the concert, book a room, get a spa treatment and have a nice dinner. That’s a different kind of experience than come in and play your machines and stay overnight.”

The Oak & Fork restaurant opened last year, bringing a high-end but unpretentious feel to the casino’s dining options and attracting foodies. The restaurant serves wine and small-plate items like meats, cheeses and hors d’oeuvres meant to be shared. The menu recommends wine and food pairings.

“People enjoy what we have to offer. It’s grown with the times,” said Mike Kintner, director of marketing and operations for Harrah’s Ak-Chin, who estimates that 700,000 people visit the property a year.

The growth has been steady over the years. In 2001, when there was just a casino, the tribe added a 148-unit resort hotel. In 2010 the hotel was expanded and the tribe purchased the Southern Dunes. In 2012, the Multi-tainment Center opened next door to the casino and hotel. The tribe followed the outside management model that has been successful, with UltraStar running the Multi-tainment Center and Troon running the golf course.

The profit from all these enterprises goes to a tribe of around only 1,100 members. The money has funded community services such as health care, youth, elder and education programs.

“We have been able to provide services that we had never, ever fathomed before for our people,” Miguel said.

Harrah’s also employs around 50 Ak-Chin members as well as about 900 people overall, 80% of who live in Pinal County, Kintner said. It’s one of the county’s largest employers.

Kintner credits customer service and Caesars rewards program for repeat customers. Benefits earned through the rewards program are good at other Caesars properties around the world.

“Almost 80% of our guests drive past two or three other casinos to see us because of our rewards program,” Kintner said. “Arizona has a lot of winter visitors, and that’s one of the things they like.”

In addition to Chappelle and Yoakam, other well-known names to perform at the new concert venue include the Righteous Brothers, Starship, Penn & Teller and Eddie Money.

Ramon Ayala, a Mexican musician and songwriter of Norteño music with a rabid following, played at the Multi-tainment Center last year. Miguel said he spoke to fans who cried while describing to him how much the show meant to them. It’s something Miguel keeps in mind when planning for the future.

“I want Maricopa Ak-Chin — and it may not happen in my lifetime, but we are laying down the foundation — to be the No. 1 entertainment capital of Arizona,” Miguel said. “I want people to know that entertainment is going to be here and we’re going to have fun.” | PW