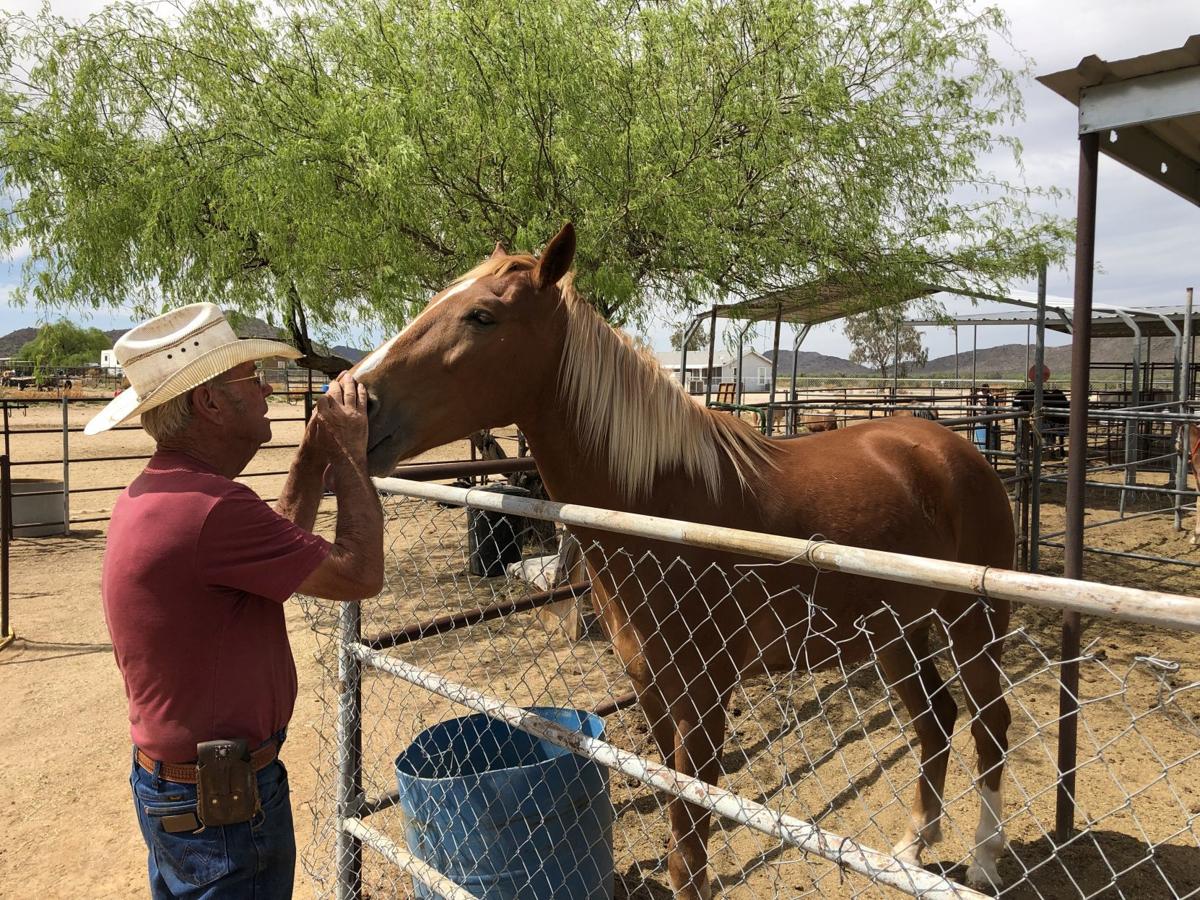 Owner Glenn Hunter greets one of the horses at Hangin' Saddle Ranch near Maricopa. 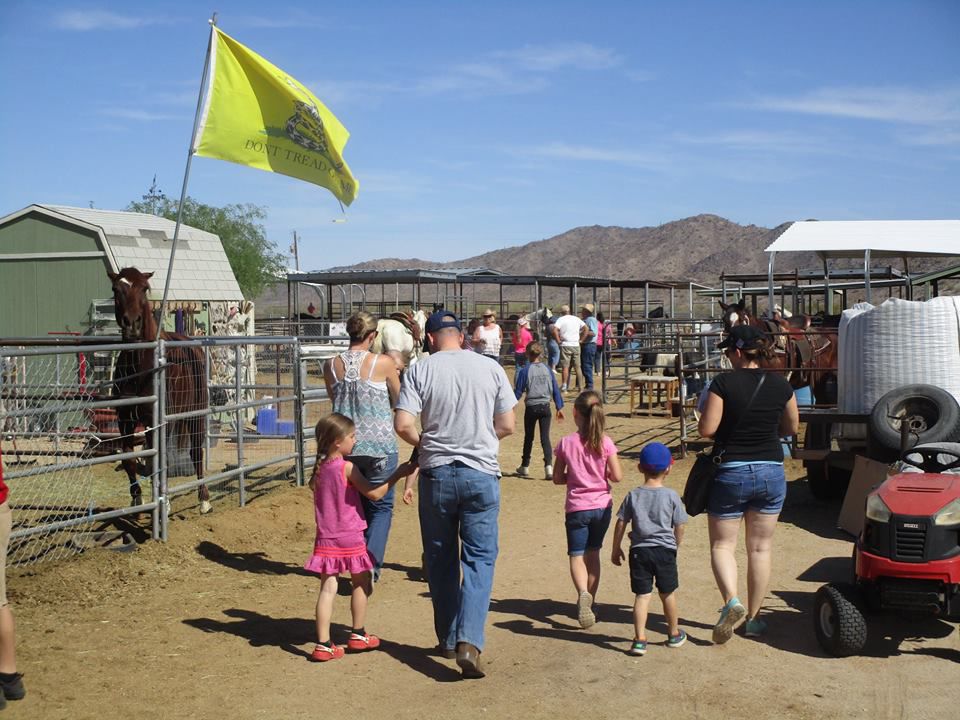 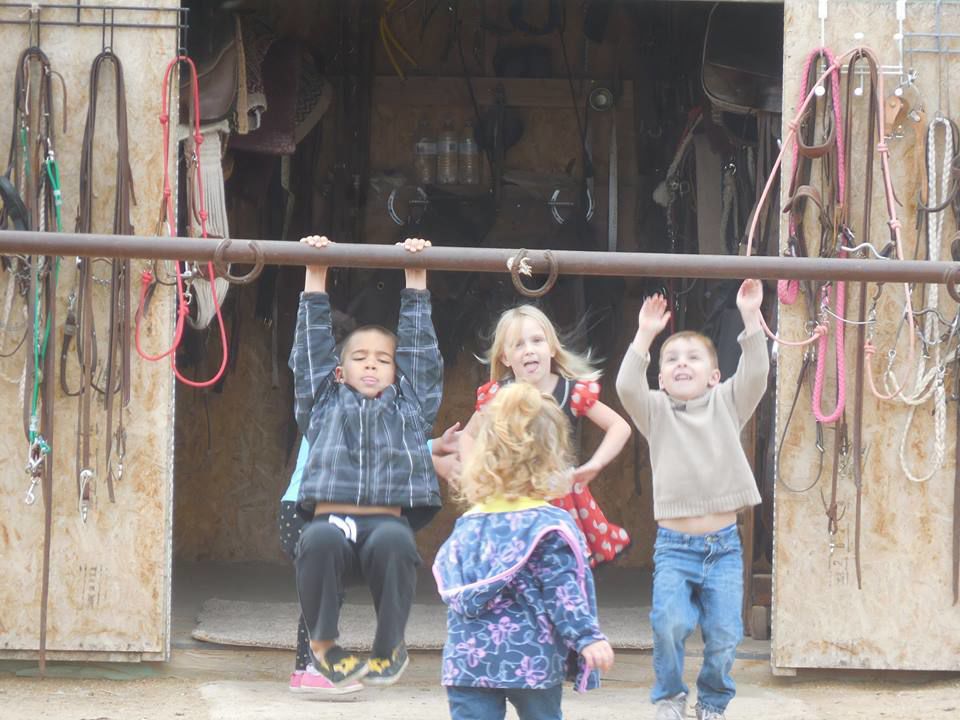 Children can take riding lessons and enroll in a Junior Ranch Hands program at Hangin' Saddle Ranch near Maricopa. 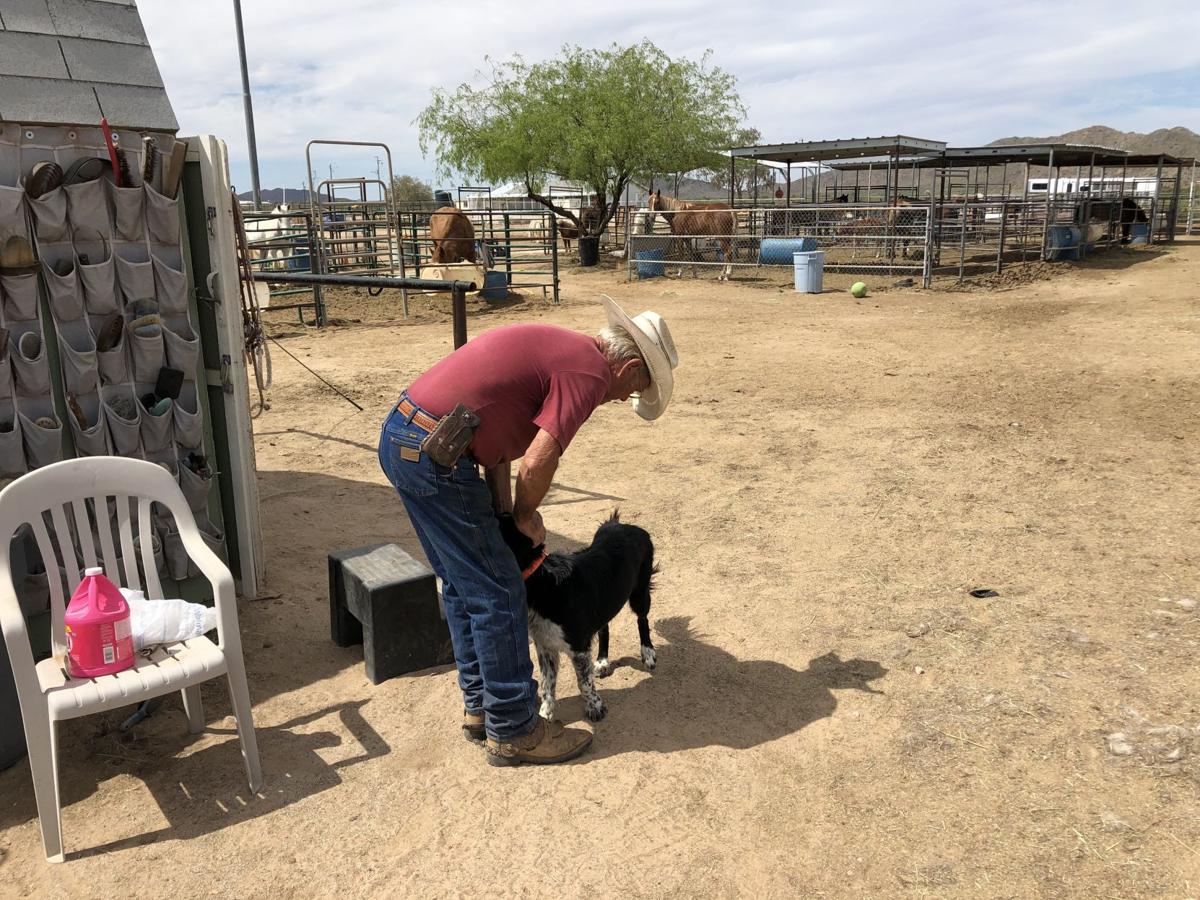 Glenn Hunter greets one of the ranch dogs at Hangin' Saddle Ranch near Maricopa. 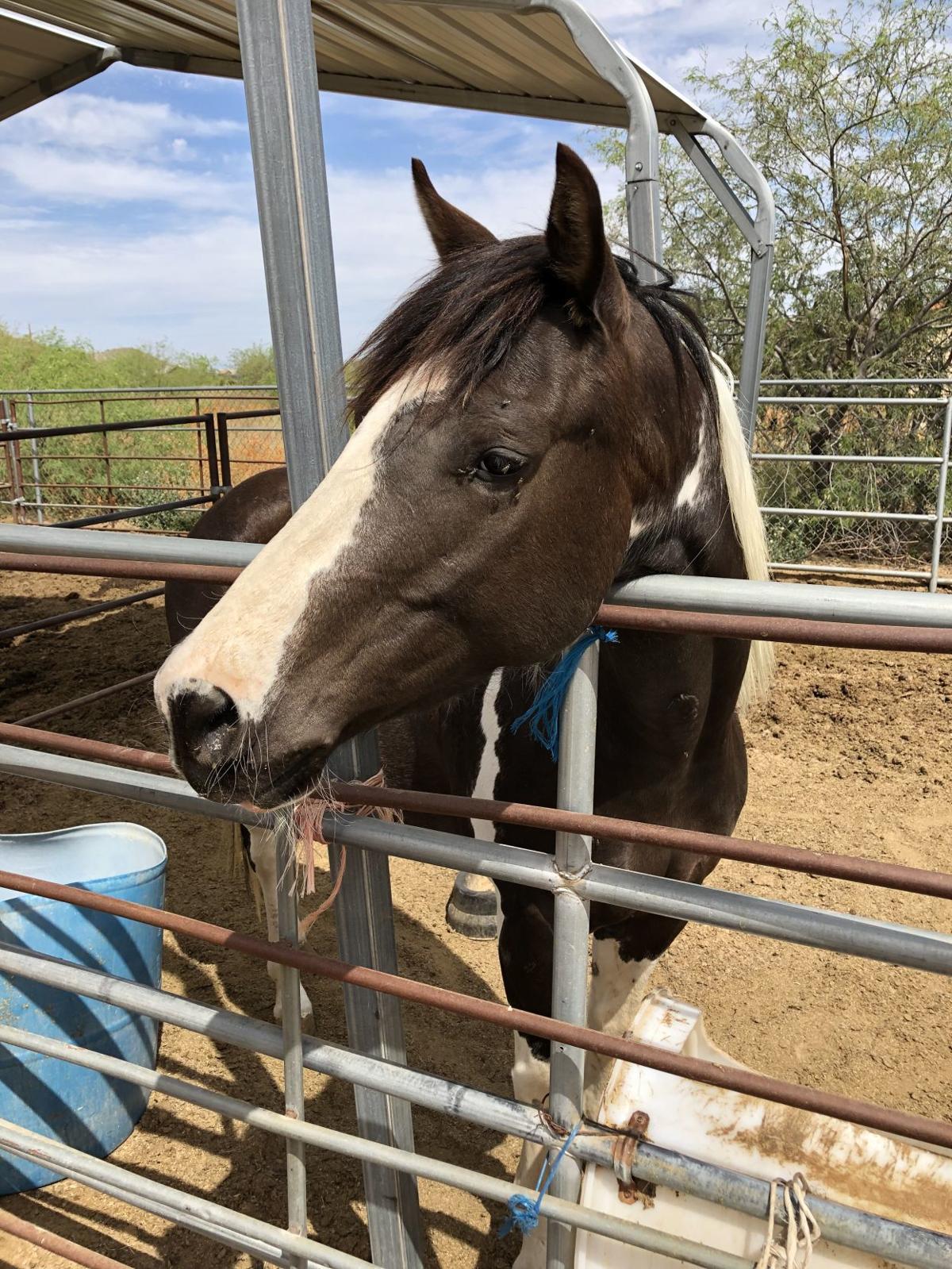 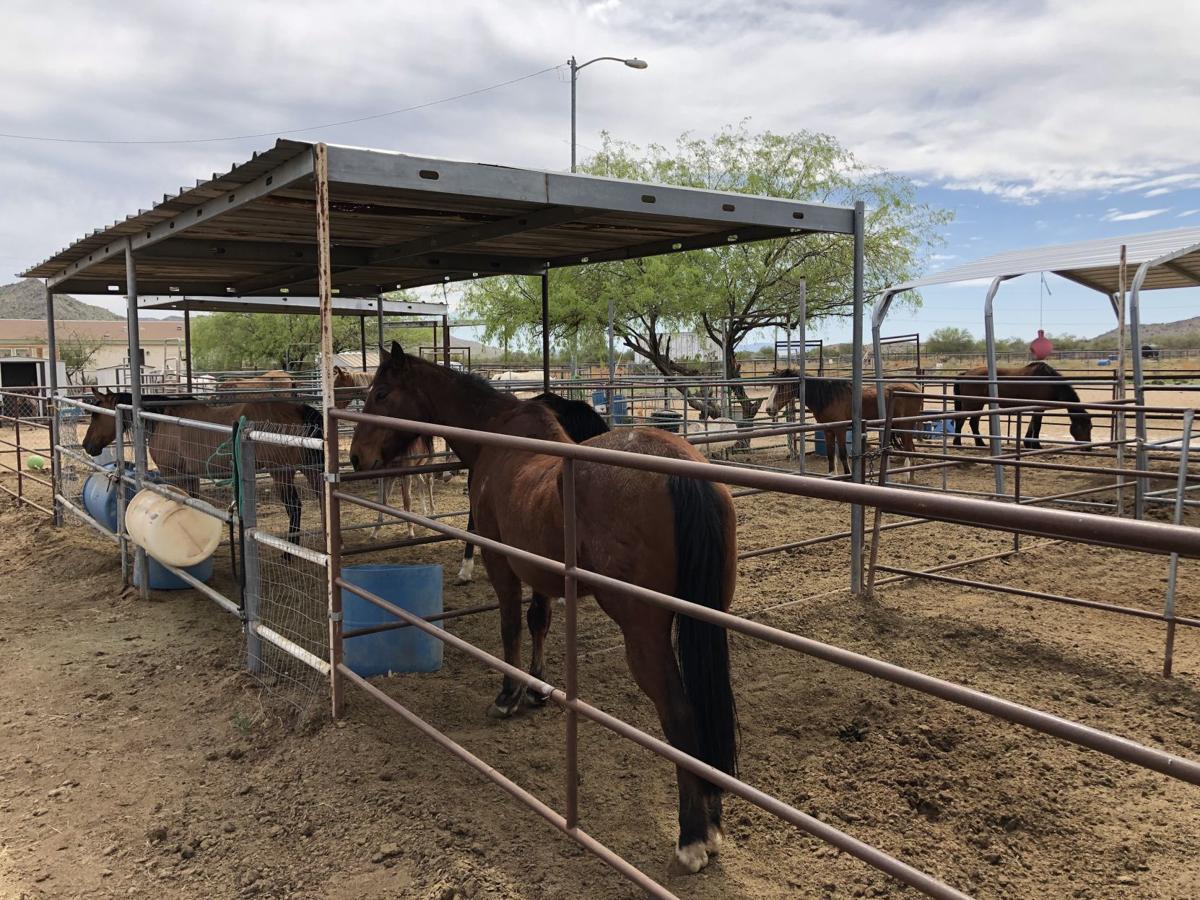 Owner Glenn Hunter greets one of the horses at Hangin' Saddle Ranch near Maricopa.

Children can take riding lessons and enroll in a Junior Ranch Hands program at Hangin' Saddle Ranch near Maricopa.

Glenn Hunter greets one of the ranch dogs at Hangin' Saddle Ranch near Maricopa.

The Great Recession 10 years ago destroyed a lot of businesses, but in the dusty desert southwest of Maricopa, it helped start one.

Glenn Hunter was ready to retire and enjoy time with his wife, Lea, and his horse, Sonny, at their rural property.

When their neighbors fell behind on mortgage payments and began to lose their homes, the neighbors asked if they could board their horses with the Hunters. Glenn and Lea agreed, and before they realized it, they were running a horse boarding business.

“This wasn’t supposed to happen,” Glenn said. “It just did, because we have friends that we care about, and we care about their horses.”

Then it grew. The Hunters added “colt starting,” or training young horses. Then came horse riding lessons. Their property is surrounded by thousands of acres of public land, so they offered trail rides. People from around the word still come by to enjoy a 2½- or 4-hour stroll through wilderness on a docile horse.

“Nobody’s ever been hurt out here,” Glenn said.

Eventually, the couple named the operation Hangin’ Saddle Ranch. While there are other horse boarding operations in the area, Hangin' Saddle Ranch is the only one that offers such a broad range of services.

On the day Pinal Ways visited, Glenn was in the house looking for bleach to clean the water barrels so green mold doesn’t form. He offered a firm handshake after answering the door while several working or retired ranch dogs barked. He looked the part of an old cowboy, with the hat, Wrangler jeans and skin that’s been wrinkled from hours working in the sun.

The Hunters own seven horses themselves and board more than 20 others. Lea handles scheduling and manages the operation. Glenn wakes up before the sun rises and spends the day feeding and watering animals and repairing the damage that horses at play cause to stalls, rails and water faucets.

That’s in addition to the trail rides and riding lessons he goes on. If a sick horse happens to keep the Hunters up at night, they might be running on two or three hours of sleep. Still the now-73-year-old former welder and auto body repairman found time to win 30 ribbons and 13 trophies with his show horse, Sonny, in 2014.

The hard work is worth it, the Hunters said, for the joy it brings people, especially children, when they develop a relationship with horses. It’s why he took his neighbors’ horses in 10 years ago.

“It’s hard for me to tell people no when it comes to their kids or their horses,” Glenn said.

As if they didn’t have enough going on, with boarding, colt starting, riding lessons and trail rides, they started a Junior Ranch Hands program.

It’s for kids who have been taking riding lessons, Lea said, “and they want to know more than how to ride a horse.”

It has a curriculum like you’d find in a classroom. A thick binder with papers and plastic tabs outlines each lesson.

Eight students meet at the ranch for 13 lessons, one every other week. The students must be at least 8, and they are usually children, although one student was 64.

In one lesson they learn about horse tack, including each piece’s purpose and what it’s called. They take it apart, clean it, and put it back together.

A professional farrier spends some time with the students because, Lea said, if a horse’s hooves aren’t properly maintained, they can get sick and stop eating, “and then you’ve killed your horse.”

And if they don’t already have it, students learn respect.

“If you are told to do something the answer is not, ‘why?’” Lea said. “The answer is, ‘yes, ma’am.’ You can come back later and ask why. … If you’re in the arena and you tell them to do something and they ask why, that could get them hurt.”

Each session also includes a riding lesson and time spent doing a ranch chore, such as watering, cleaning out the barn or grooming. Each session lasts about two hours.

The Hunters’ work with children doesn’t end there. They teach around 30 girls and four or five boys regular riding lessons. And sometimes Glenn gets phone calls.

“We’ve been known to take on troubled kids, and the horse does change them,” he said.

One day Glenn got a call from a father who was worried about his young teenage daughter. She had been getting in trouble at school, and she was angry, bipolar and suicidal. Glenn was leery but invited the young girl out to the ranch.

“She actually started changing her attitude about a week after she was here,” Glenn said.

She wanted to ride Glenn’s black horse, but he wouldn’t let her — at first. The horse wasn’t “people friendly,” and Glenn was the only person who rode him.

After a few months of lessons, the girl persuaded Glenn to allow her to ride the horse, but with a warning.

“Here’s how you ride him. Listen to me or he will throw you to the ground and step on you,” Glenn told her. The student, Glenn said, “rode the way I told her to and she’s been riding ever since then.” | PW