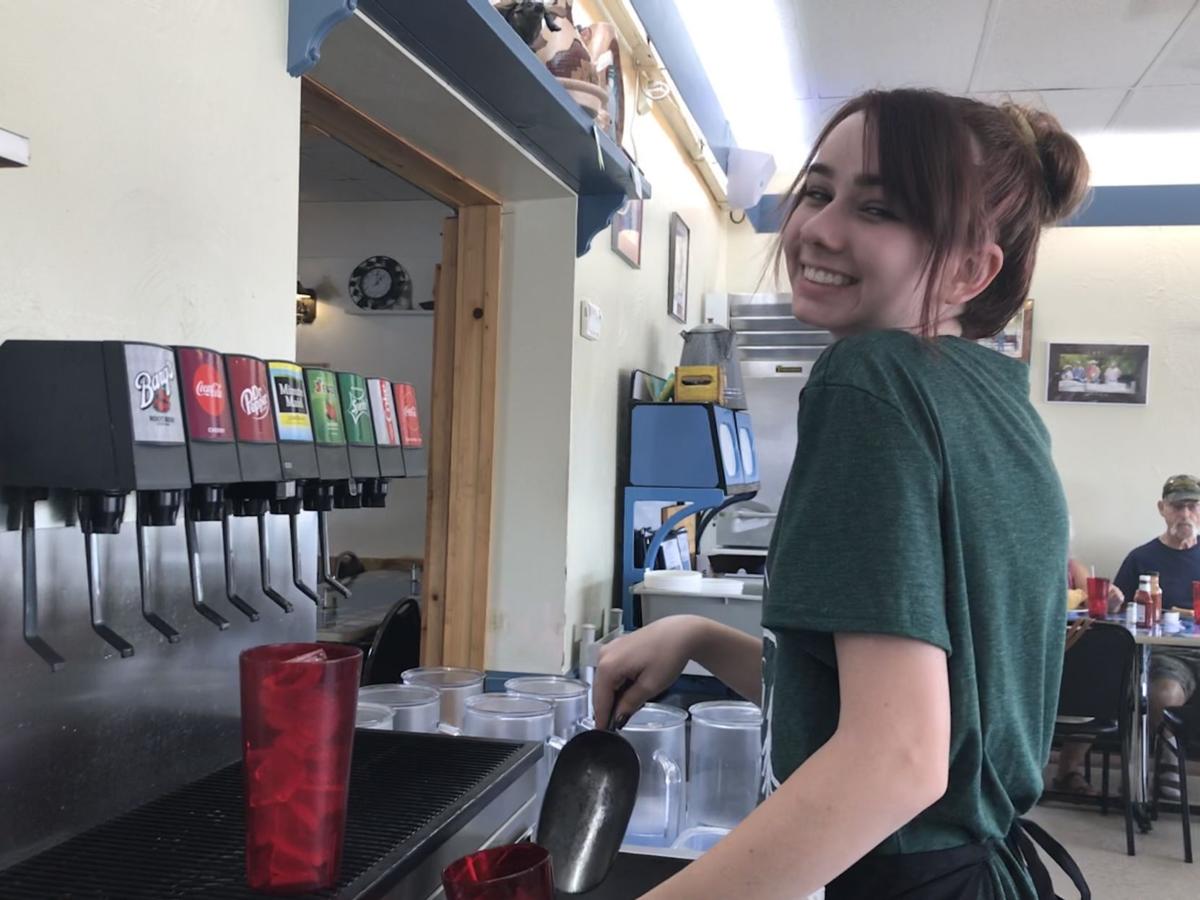 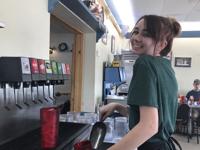 Waitress Alanna Shepherd prepares drinks for a couple of customers at Tag’s Cafe. Amid the COVID-19 pandemic, servers have been asked to take on a lot more duties. 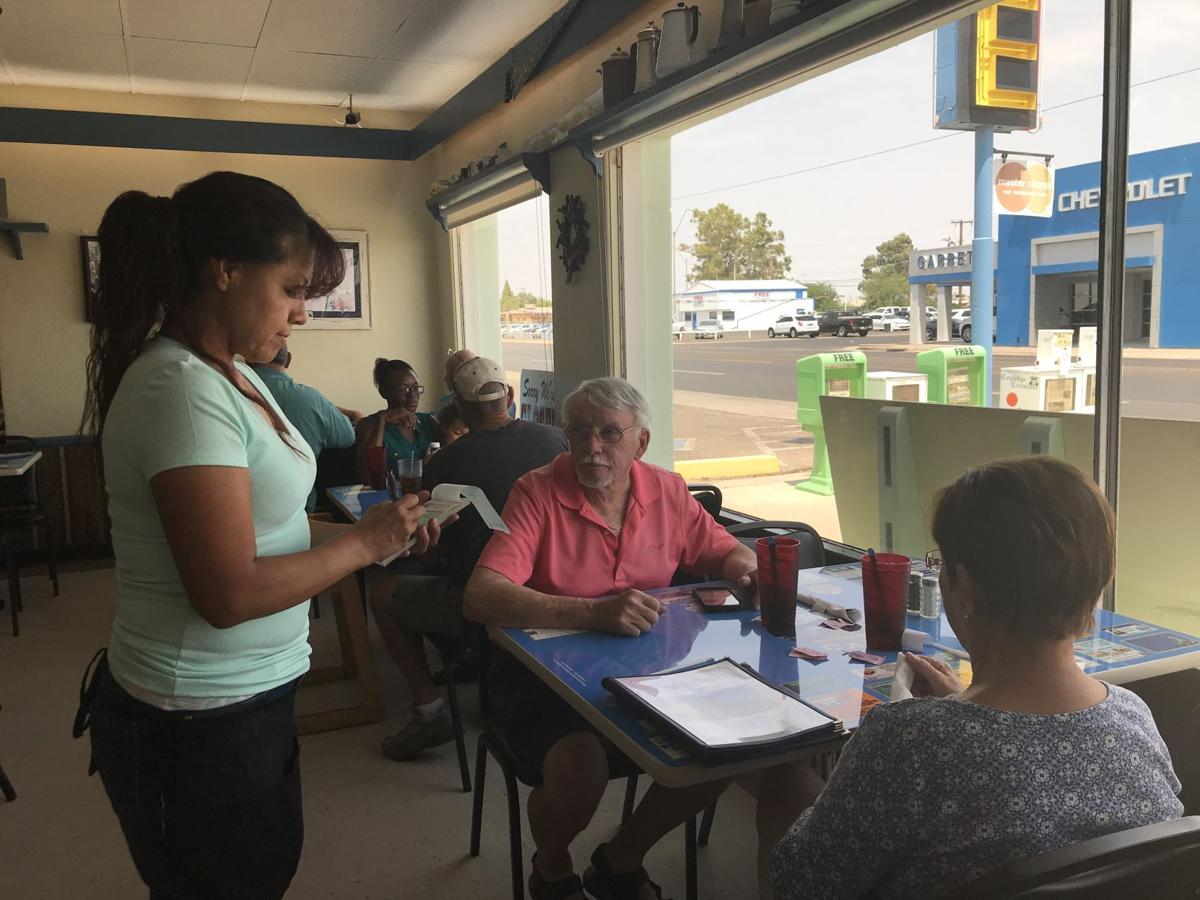 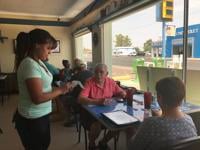 Tracy Whitman, a waitress at Tag’s Cafe in Coolidge, takes the order of Johnny and Margaret Williams. The pandemic has not deterred the Williams from dining out and enjoying the occasional meal at beloved places like Tag’s.

Waitress Alanna Shepherd prepares drinks for a couple of customers at Tag’s Cafe. Amid the COVID-19 pandemic, servers have been asked to take on a lot more duties.

Tracy Whitman, a waitress at Tag’s Cafe in Coolidge, takes the order of Johnny and Margaret Williams. The pandemic has not deterred the Williams from dining out and enjoying the occasional meal at beloved places like Tag’s.

COOLIDGE -- COVID-19 has changed a lot of things. Long-awaited events have been canceled, many are working from home and schools have put off campus reopenings.

For Janice Calvert and Richard Schaar, the virus has also had a profound effect on their business. Calvert and Schaar are the owners of Tag’s Cafe, located at Central Avenue and Arizona Boulevard in Coolidge.

Like other restaurants around the state, Tag’s was forced to close midway through March in light of Gov. Doug Ducey’s order for Arizona restaurants, movie theaters, bars and gyms to close.

Tag’s reopened for business after more than a month-and-a-half closure on May 11. On that day, according to Calvert, the cafe saw an influx of customers.

“We had a real nice steady stream of customers,” she said. “People were so grateful we were back even with the reduced hours.”

But foot traffic at the well-known café has since slowed. Calvert estimates that the restaurant’s daily sales have fallen 40-50%.

“It’s frightening, it really is,” she said. “If it continues this way we won’t be able to expand our hours.”

The café is currently operating on reduced hours, opening at 7 a.m. and closing at 2 p.m. Upon reopening, the plan for Calvert and Schaar had been to expand those hours as customers returned.

Months later, however, the restaurant’s hours remain the same as the once crowded bar and dining areas continue to be relatively vacant. Due to those reduced hours, Tag’s has also been operating on a reduced workforce.

Another big concern for the business owners is the possibility that the winter visitors may not make it back this year. Tag’s, Calvert said, makes the bulk of its revenue in the winter months.

“When we had to shut down, that was in the middle of March, which is traditionally our highest volume and our biggest money month,” she said. “We were probably going to have the best year ever prior to COVID.”

After closing for a portion of the year amid the early onset of the pandemic, Tag’s took a significant financial hit, Schaar noted. Reopening has also had its costs.

“It hit us in the pocketbook pretty good,” he said. “This deal is costing us a pretty good penny to run the cafe like this.”

Despite the reduction in customers, the cafe’s owners and staff members are doing what they can to help diners feel safe.

Since reopening, doing what they can has included regularly purchasing a 5-gallon container of cleaning solvent designed to sanitize surfaces, which the waitstaff uses to disinfect each table after a customer leaves.

Additional precautions, like wiping down menus after each use, are also being taken.

A quick look around reveals other changes as well. Signs adorn the restaurant’s two main entrances and cash registers, asking patrons to social distance and imploring those that may feel under the weather to stay home.

Those dining in may also notice a difference in what is readily available to them on the table while enjoying a meal at Tag’s.

Condiments, jams, cream and sugar now must all be brought out to customers separately. Those required changes, Calvert noted, have impacted the front of the house more than any other part of the restaurant.

“It’s much different for the servers because they are having to double, triple and quadruple the amount of steps they do every day,” she said.

She noted that though they have always worked to keep Tag’s very clean, the restaurant’s staff are now required to be incredibly thorough when it comes to sanitizing tables.

Whereas once waitstaff may have conducted a deep clean that included wiping the backs of chairs on a monthly basis, Calvert said, servers are now asked to clean and disinfect those areas daily.

But other health and safety elements that have become typical of the dine-in experience amid the pandemic require less effort on Calvert and Schaar’s part.

In July, Ducey released an order that limits the indoor dining occupancy for restaurants to 50% as part of a number of measures implemented to bring the spread of the virus under control.

But the order changed very little for Tag’s, with Calvert noting that the restaurant has not had many issues with the 50% occupancy rule as dine-in customers are now fewer.

Ensuring that dine-in customers maintain adequate physical distancing between tables has also not been a challenge for staff at the café.

Though no tables have been removed from the restaurant, Calvert has created signs indicating that certain tables are closed should dining areas get too crowded. But so far, she hasn’t had to use them much.

Customers, Calvert said, tend to self-regulate — in some cases keeping several tables between themselves and other patrons.

“When they walk in the door, I will actually tell them to have a seat wherever they are comfortable,” Calvert said. “And if you look around, even at peak times, (customers) are doing their own social distancing. Most people are trying to do that.”

Such precautions are not limited to Tag’s. Over the last six months, COVID-19 has forced most restaurants to make similar changes to keep their doors open.

Calvert and Schaar dine out at other restaurants when possible during the pandemic. Those experiences have given Calvert a very clear picture of how much restaurants are doing to ensure diners feel safe.

“My personal opinion is that it is safe to eat out,” she said. “All of these places are doing what they need to do — and probably they’re going above and beyond — to try and keep a sanitary environment.” PW

I ’ve always viewed the fall as the start of new beginnings. Growing up in Northern Californ…

Though there has been plenty of news lately about large-scale corporations moving to Pinal County, the economy is still highly dependent on sm…