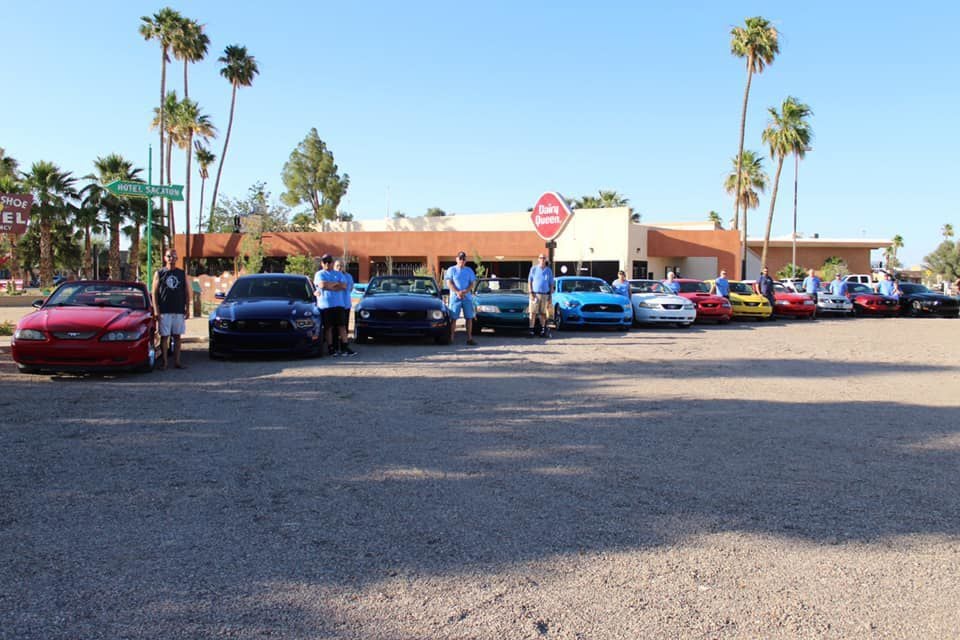 The Desert Sky Mustang Club at the Neon Sign Park in Casa Grande. 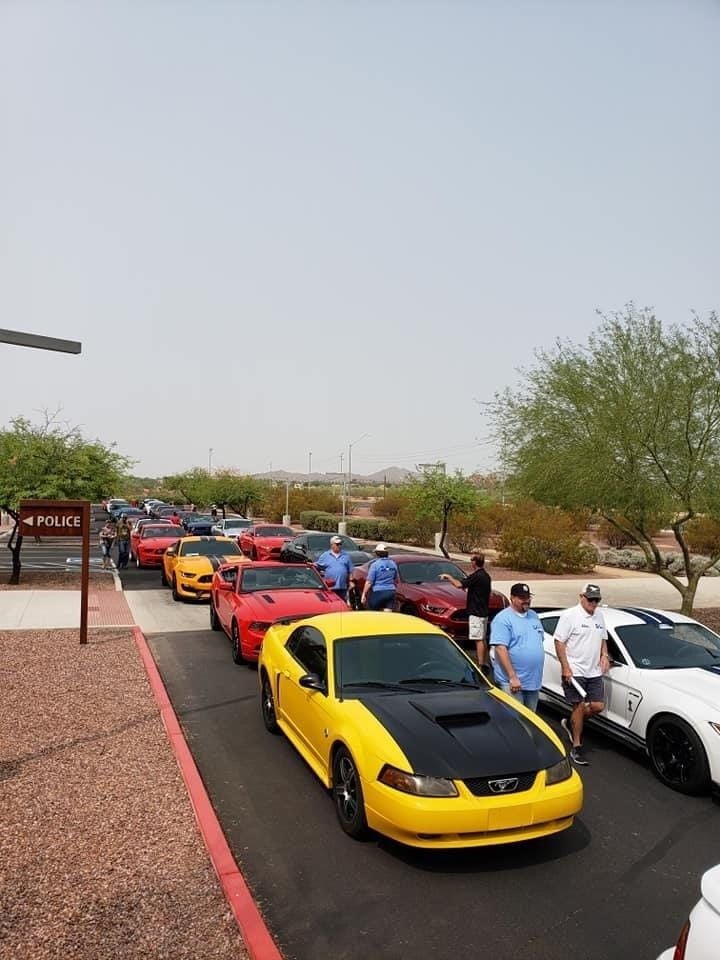 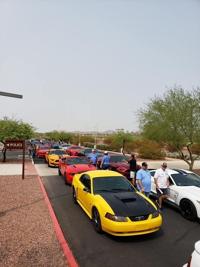 The club often holds “Back the Blue” runs in support of local law enforcement, such as this one held at the Casa Grande Police Department last year. 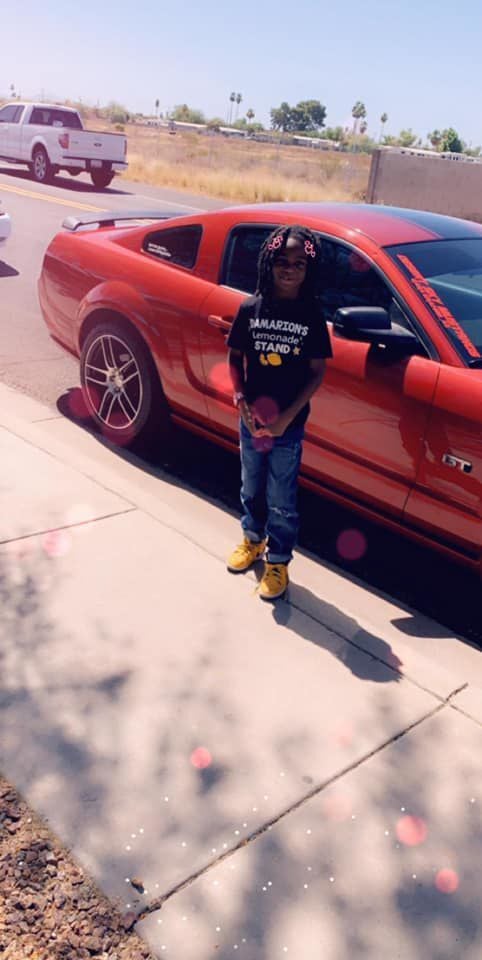 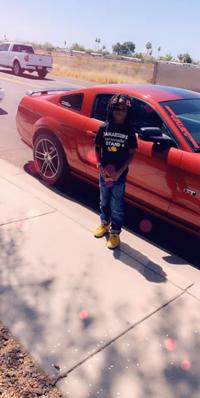 The Desert Sky Mustangs Club is for those who love to spend a day cruising down a long, open road accompanied by close friends and giving back to a good cause.

The Desert Sky Mustang Club at the Neon Sign Park in Casa Grande.

The club often holds “Back the Blue” runs in support of local law enforcement, such as this one held at the Casa Grande Police Department last year.

The Desert Sky Mustangs Club is for those who love to spend a day cruising down a long, open road accompanied by close friends and giving back to a good cause.

CASA GRANDE -- There’s nothing better than spending the day in your car on a long, open road with the windows rolled down, accompanied by 40 of your closest friends. At least, that’s what the members of Desert Sky Mustang Car Club of Arizona think.

DSMC is a group of Mustang enthusiasts who get together for meetings, to do charity work and, most importantly, to drive their favorite car.

The club started in 2012 in Casa Grande. The first president wanted to start the club but didn’t know if there were enough Mustangs in town to make it happen. Shortly after he had that thought, he began seeing many Mustangs driving around town and decided to give it a go.

“It all basically formed out of a love for Mustangs,” said current club President John Mihalic. “It doesn’t matter what kind of shape your car is in or what year it is, every Mustang is welcome.”

The group currently totals about 85 people, although Mihalic said some of those are snowbirds so it is rare that the whole group is together at one time.

The biggest focus is simply to get together and ride.

“We do runs anywhere we can drive and enjoy the drive,” Mihalic said. Some of their favorite runs are Tortilla Flat and Route 66. Mihalic said it’s quite an amazing sight to see 40 Mustangs traveling together up the mountain.

But more than leisurely runs, the members also pride themselves in organizing runs that benefit the community. One that they are most well known for is their “Back the Blue Run” to show support of law enforcement and first responders.

Mihalic said this run originated because the group was seeing a lot of animosity against police offers and they wanted to show their support of these men and women. So they organized a run to the Casa Grande Police Department. There, they gave goodie bags and prayer pillows to each officer.

“We wanted to encourage them to hang in there and to remind them that they are not alone,” Mihalic said.

The run was such a success and meant so much to the officers that DSMC decided to organize a second one. This time they broadened their reach and went to the Casa Grande office of the Arizona Department of Public Safety, the Pinal County Sheriff’s Office, Avondale Police Department and Scottsdale Police Department.

“We almost brought the DPS sergeant to tears,” Mihalic said. “That was definitely not what I was expecting.”

The group is in the process of planning a third “Back the Blue” run for Border Patrol agents and the Casa Grande Fire Department. In addition to the runs for law enforcement, they also host a poker run to raise money for local charities, a water run to support local food banks and participate in car shows if they benefit charities — although some runs got put on hold this year due to COVID-19.

Mihalic said that this year has been tough keeping the club active because of COVID-19. He said many people aren’t going out, which makes it hard for the group to meet or plan events.

Through it all, Mihalic has held on to the focus of the group: “The reason they joined was to drive their car, hang out with like-minded people and help the community.”

In fact, Mihalic said it goes beyond just hanging out with people who also drive Mustangs — he said it is one big family. He said they are there for each other through the highs and the lows. Mihalic described one of their members who has been diagnosed with cancer and how they were able to do a run to his house to keep his spirits high.

And the group has an impact on his immediate family as well. He said the group helped bring him and his son closer together, and now both of his sons want Mustangs, so he gets to connect with them through that.

“There aren’t too many cars out there that can bring people together the way a Mustang can,” he said. “Because of this car, I’ve met people that I would have never met. It’s a big part of my life.”

The club has monthly meetings on the first Saturday of the month at the Golden Corral on East Florence Boulevard at 10 a.m. For more information on the group, visit desertskymustangs.net. PW

COOLIDGE -- When Larry Roberts was growing up, his favorite hangouts included the local arca…