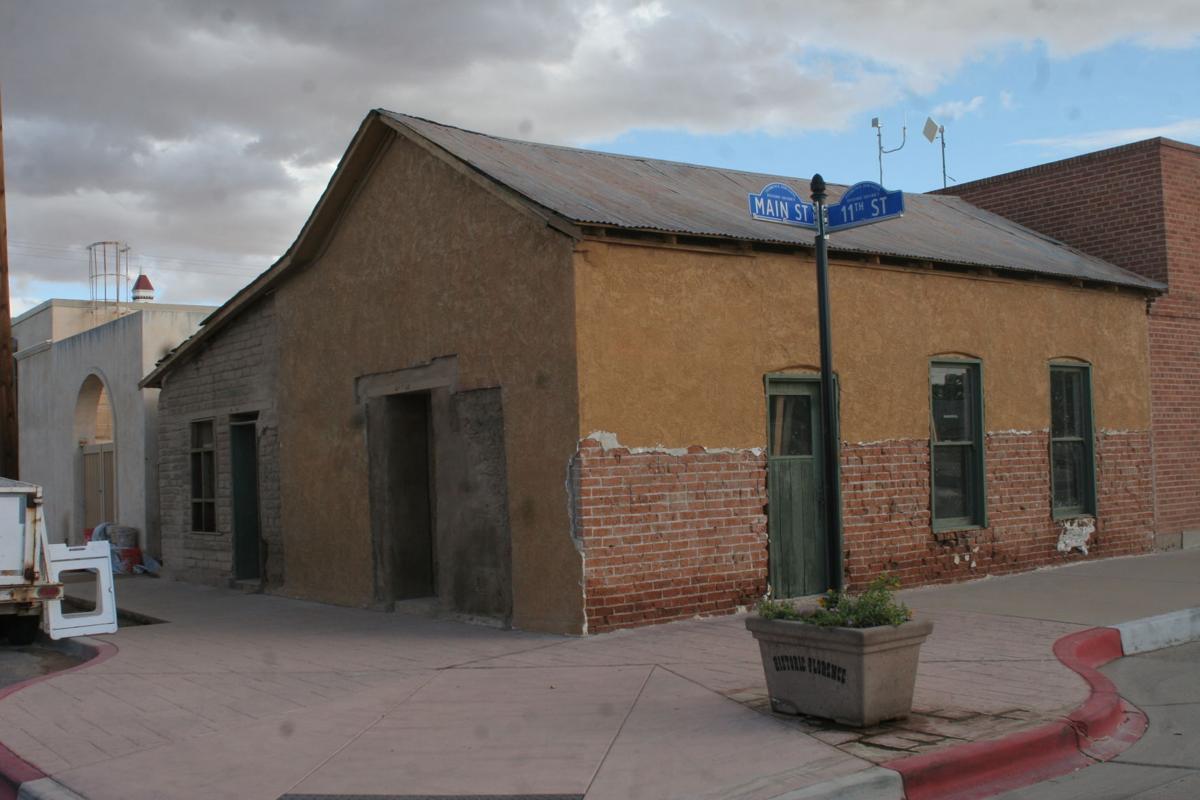 The simple little adobe known historically as “The Francisco Cuen House and Butcher Shop” is being restored and should be ready for a tenant next year. 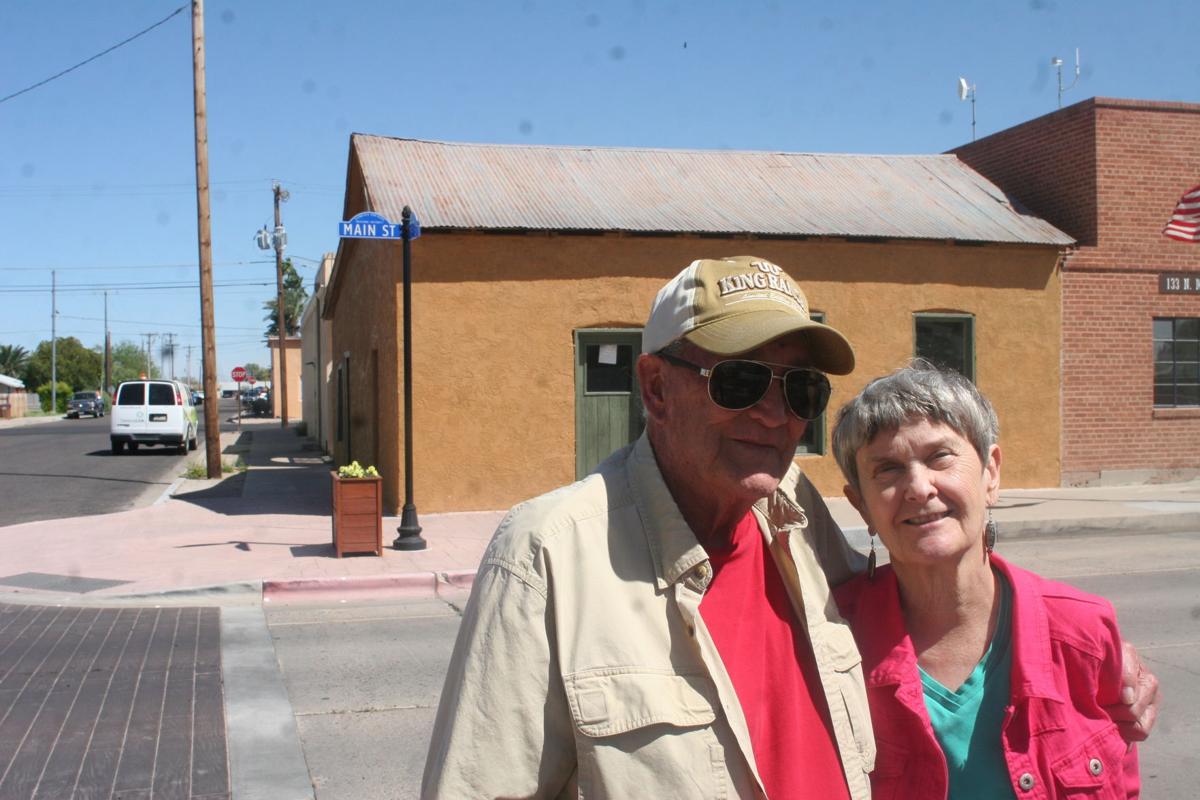 Tom and Lynn Smith of Florence are pictured outside the Cuen House last year, when they bought it from the town of Florence for $5. 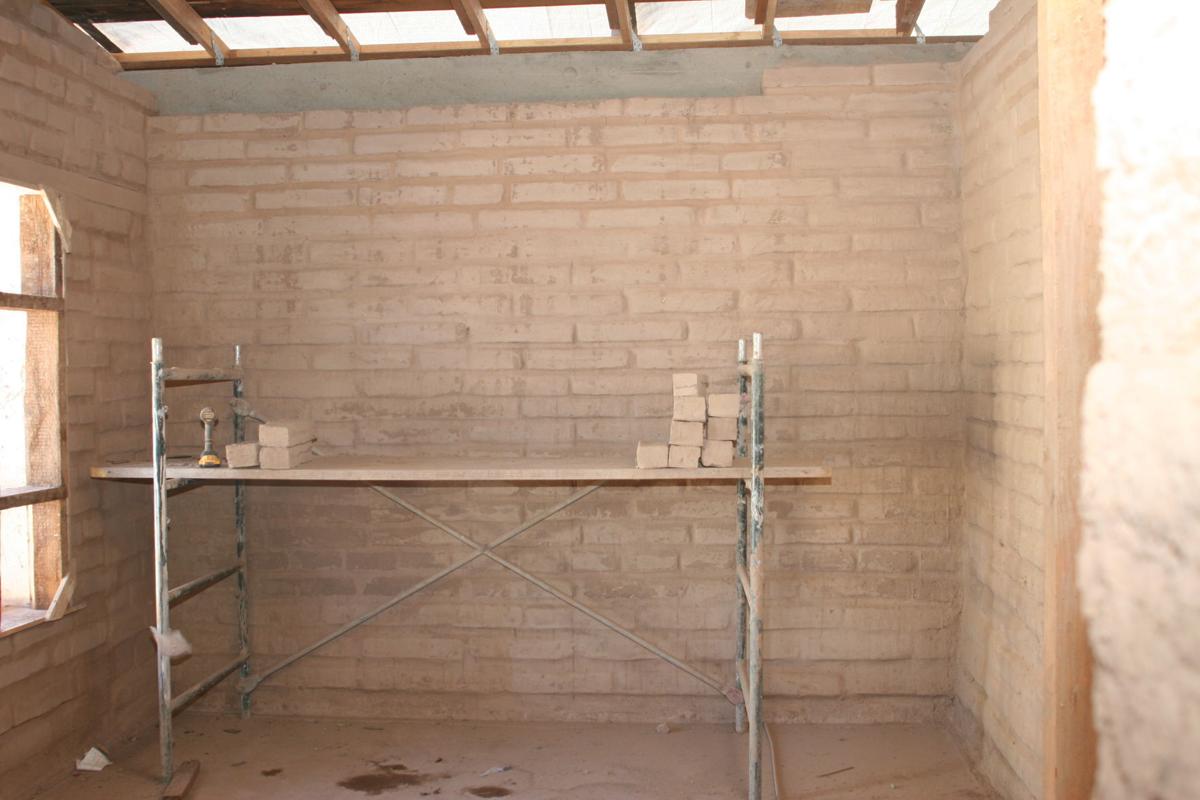 A new adobe wall in the Cuen House. 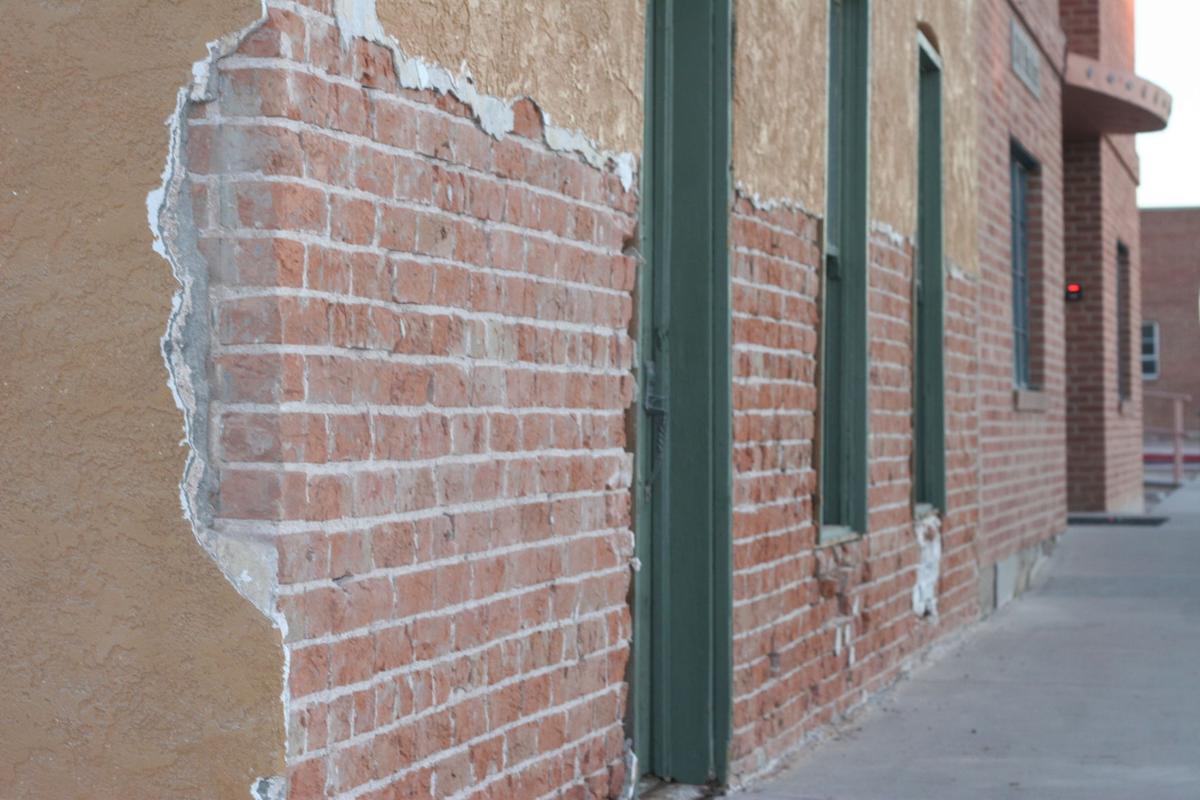 This brick wall was added to the Cuen House’s Main Street side around 1909. It will be repaired and preserved as part of the building’s restoration. 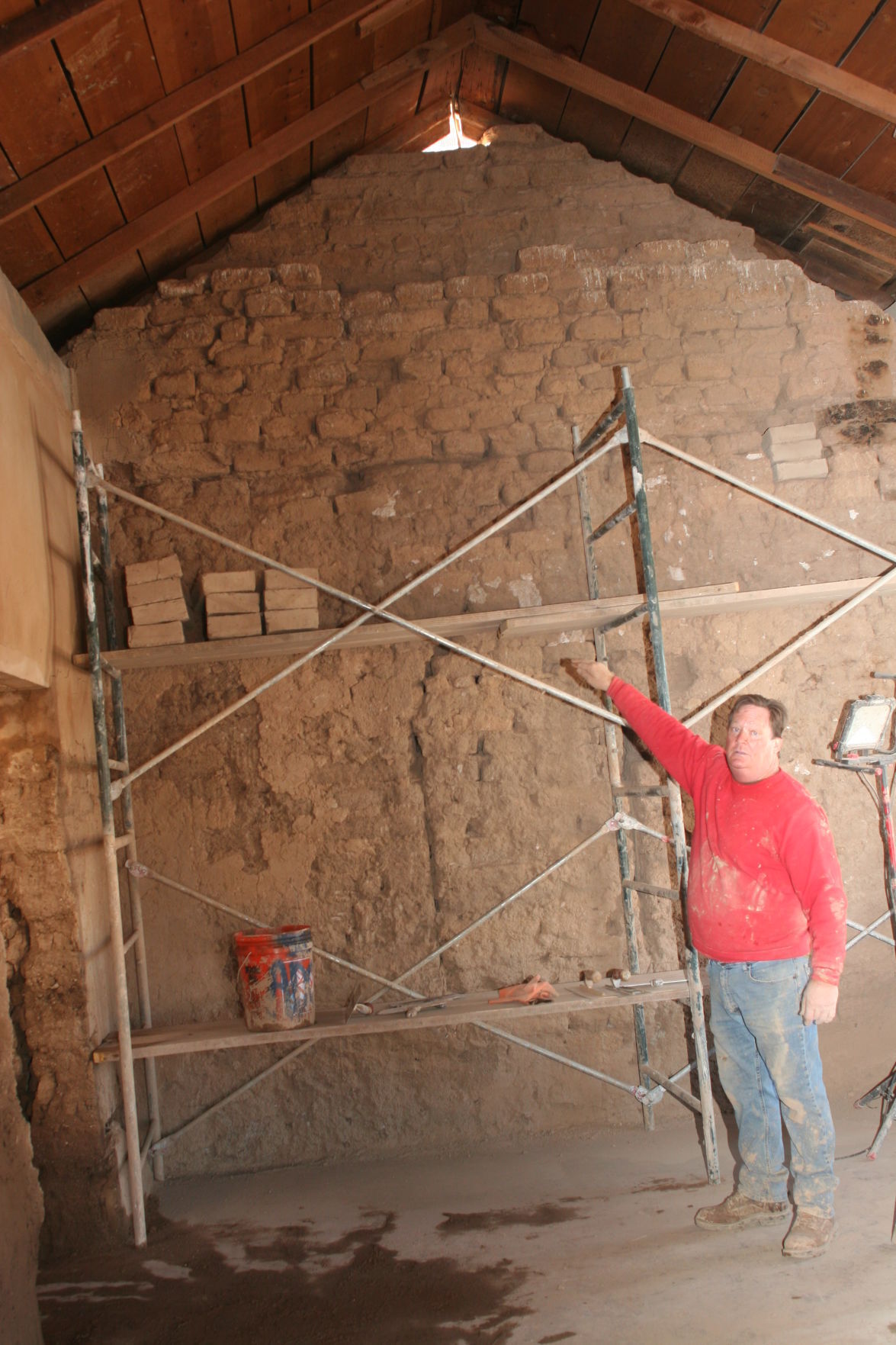 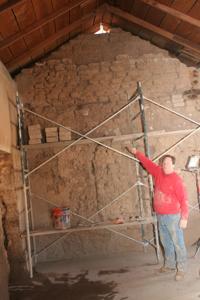 Preservation specialist Reggie Mackay carefully works in the right amount of new to preserve the old in the 138-year-old Cuen House. 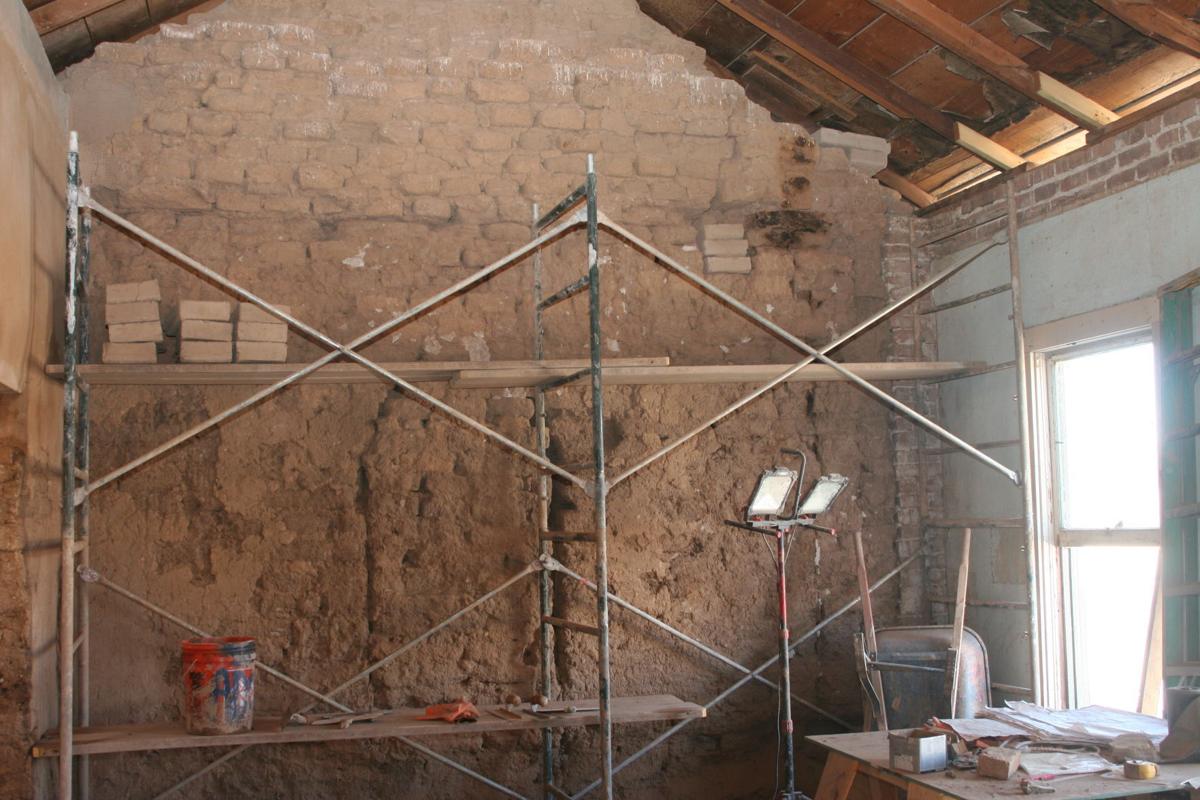 The Cuen House has had plenty of quick and make-do repairs over the decades, but is finally receiving a lasting restoration.

The simple little adobe known historically as “The Francisco Cuen House and Butcher Shop” is being restored and should be ready for a tenant next year.

Tom and Lynn Smith of Florence are pictured outside the Cuen House last year, when they bought it from the town of Florence for $5.

A new adobe wall in the Cuen House.

This brick wall was added to the Cuen House’s Main Street side around 1909. It will be repaired and preserved as part of the building’s restoration.

Preservation specialist Reggie Mackay carefully works in the right amount of new to preserve the old in the 138-year-old Cuen House.

The Cuen House has had plenty of quick and make-do repairs over the decades, but is finally receiving a lasting restoration.

FLORENCE -- When Tom and Lynn Smith were newlyweds in the early 1960s, they would drive up from Tucson to visit Tom’s aunt and uncle, with whom he lived as a teenager. Lynn still recalls her shock at how Florence had become so rundown.

“I’d say, ‘Tom, I never want to live here.’” The Clarke house was already falling apart, and the first Pinal County Courthouse, which had recently been the local hospital, “was an absolute disaster.” Other Main Street properties were similarly derelict and decrepit. Barely worth noticing was a simple little adobe at Main and 11th streets — at the time, a lawyer’s office — hardly remarkable in any way.

But the Smiths did eventually retire to Florence, in an historic home downtown. Some of those crumbling buildings of yesteryear have been saved, others are gone. The Smiths became active in the town and the Pinal County Historical Society and invested in some historical preservation of their own.

Then one day last year, they were sitting on a bench across the street from that simple little adobe — now an eyesore that some would prefer to see knocked down for good, yet special to others for the history it had seen.

Tom turned to his wife and asked, “You wanna do it?” They decided at that moment to invest what it took to preserve the little building known historically as “The Francisco Cuen House and Butcher Shop.”

Tom explained in a late-October interview, “What we have here in Florence is history. And if we don’t take care of our history, we don’t have anything.”

Lynn added there are practical concerns as well. “I think the reason, really, is we don’t want to live in a boarded-up neighborhood. And we’ve lost so many buildings by fire. We’ve lived in this house 20 years and we’ve seen three big anchor buildings in this district burn down.”

Around 1902, Sunset Telephone and Telegraph of San Francisco bought the building for a telephone exchange.

Recall television’s Sheriff Andy Taylor picking up the phone to ask “Sarah”? In those days, a caller picked up the receiver and waited for the operator to ask “Number please?” In October of 1910, the building interior was extensively remodeled for the office.

Lynn said former police chief and mayor Tom Rankin’s grandmother worked there as an operator and even slept there to connect calls on the overnight shift. Tom Smith said that’s why the wooden southeast addition was built, for a break room.

When Rankin was mayor several years ago, he told his colleagues on the Town Council that of all the town’s historic buildings, “this has my heart.” He said his grandmother ran the telephone office, his mother lived there and his grandfather built the back portion. The original switchboard is long gone, but a group known as the Mountain Bell Pioneers was receptive to helping save the building in the past.

The phone company eventually moved out for more modern facilities. After 1950, the building became the McFarland & Fulbright law office. Ernest McFarland and Tom Fulbright were law partners and good friends. Fulbright first came to Florence in 1929 to be deputy county attorney for McFarland. They worked together in private practice as well, most notably perhaps when they were defense attorneys for Winnie Ruth Judd and successfully argued against her sanity in 1933. Judd, called the “trunk murderess,” escaped execution and was sent to the state hospital.

It’s doubtful McFarland himself ever did much legal work in the Cuen Building. By the time Fulbright moved his office there, McFarland had already served as U.S. senator and was gearing up to run for governor. He did serve as governor and was later chief justice of the Arizona Supreme Court.

Fulbright continued his law practice out of the Cuen Building until his death in 1972. Meanwhile, his office was owned by a succession of phone companies, “some I never heard of,” Tom Smith said. Although Fulbright never owned the building, the fact that it is still standing today owes much to Fulbright’s presence there, Smith said. “I think Tom Fulbright deserves more attention on this because he had it for so long. … After he died in 1972, it’s been empty ever since.”

A few years after Fulbright’s death, a movie crew added a board and batten exterior that remained on the building for many years. The building continued to be owned by phone companies until Qwest deeded it to the town in 2002. Since then, the building has had other owners that never got around to fixing it up.

“I think I’m the fourth person who’s going to restore the building,” Smith said. “The first three obviously had no idea what they were doing. Anyway, they did more damage than they did good.” All the same, there is enough of the original material left for the project to qualify as “historic preservation” as opposed to reconstruction, the Smiths said.

“There’s two ways to redo a building — one is to get the historical plaque on it, which is the easy way,” Tom said. “The second is to get it approved by not only town code, but SHPO (the State Historic Preservation Office), and also the National Park Service. … If you qualify for all of it, you do get tax credits on the building. So we went all the way to get the whole thing done.”

Preservation specialist Reggie Mackay has made 1,000 adobe blocks for the restoration. The best soil match for the originals was found on the north end of what today is the Windmill Winery in Florence.

The old butcher shop and living quarters will each be an office. The later wood-construction corner has been rebuilt for a handicap-accessible restroom and storage. Mackay said he hopes to be finished in January.

The building will have an historical plaque for the first time. “And that’s already been OK’d,” Smith said. The building’s first new tenant in almost 50 years could be an office, a store or a barbershop. Its electrical service will allow it to be multipurpose, he said. Lynn said she hopes the tenant will be something that appeals to tourists.

The Smiths previously restored a two-story building farther up the street, which today is photographer Michael Baca’s studio on the bottom floor and his apartment above it. They also did several upgrades to their own historic home near the Cuen House.

Tom Smith, who’s dealing with serious health concerns, will be 82 on Feb. 18. Perhaps the birthday present he wants most is to see the Cuen House restored.

CASA GRANDE -- From the outside, you can tell there are many cherished memories attached to …

FLORENCE — Although building continues to boom in Florence, it’s not what everyone needs, and town officials are aware of that.

FLORENCE — With a new virtual speaker series, the Pinal County Historical Society Museum will showcase the lives and stories of some of the ar…