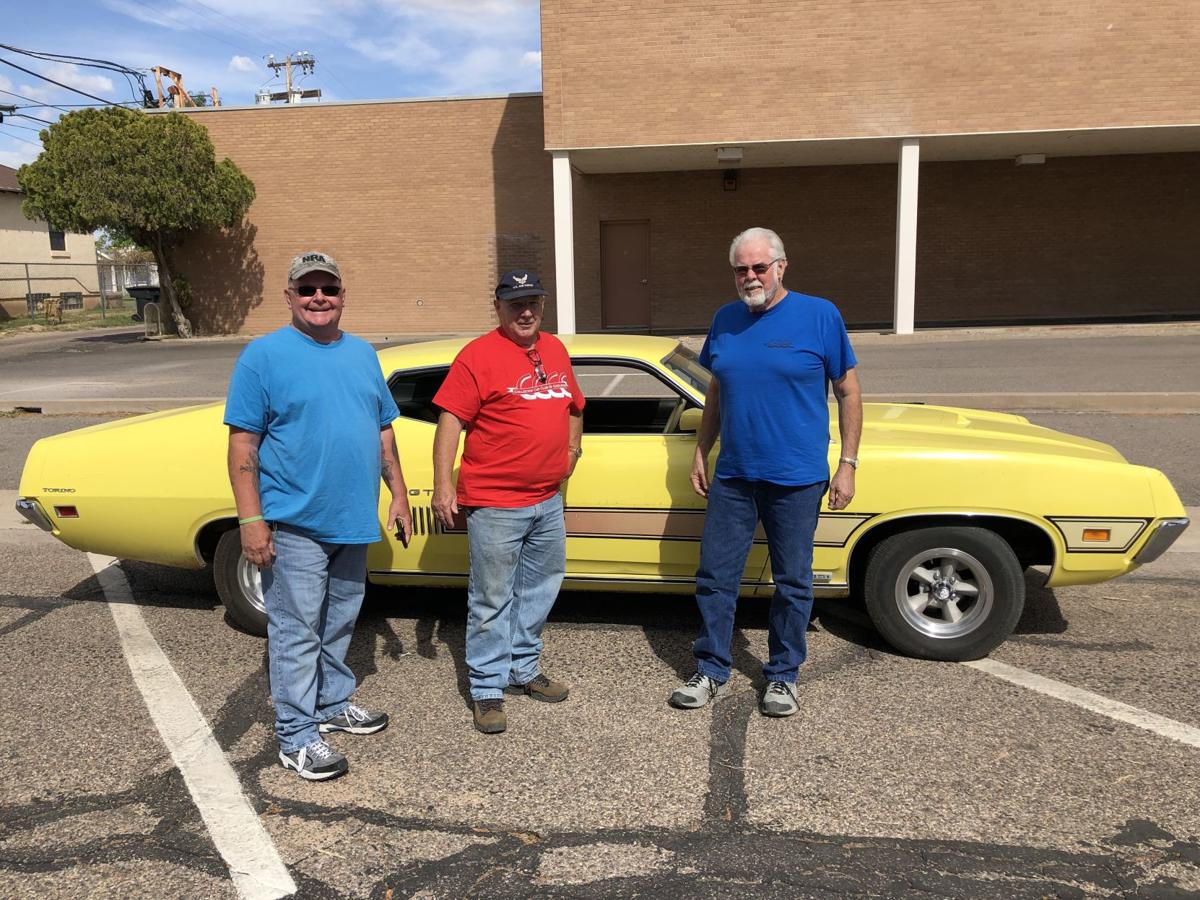 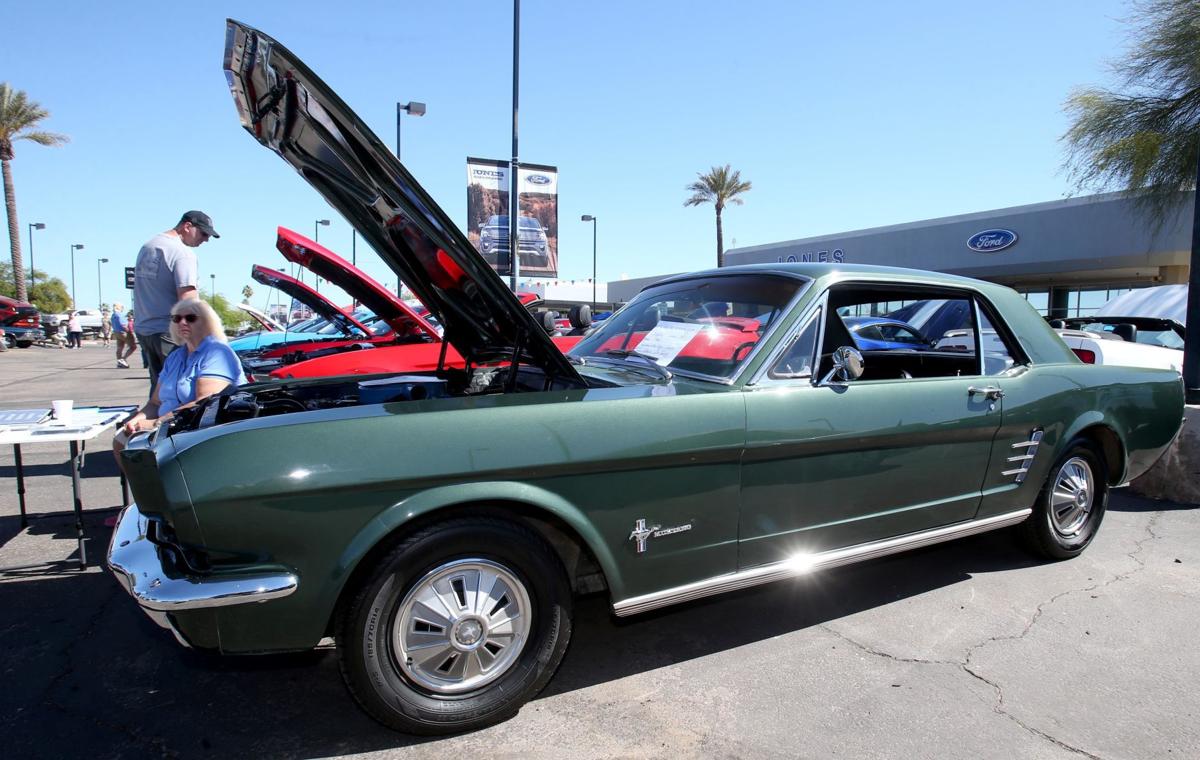 Lola DeSmith sits next to her husband’s 1966 Ford Mustang coupe during a car show in April at Glenn Jones Ford in Casa Grande. Lola was also showing her 2014 Ford Mustang GT California Special at the show sponsored by the Desert Sky Mustangs car club. 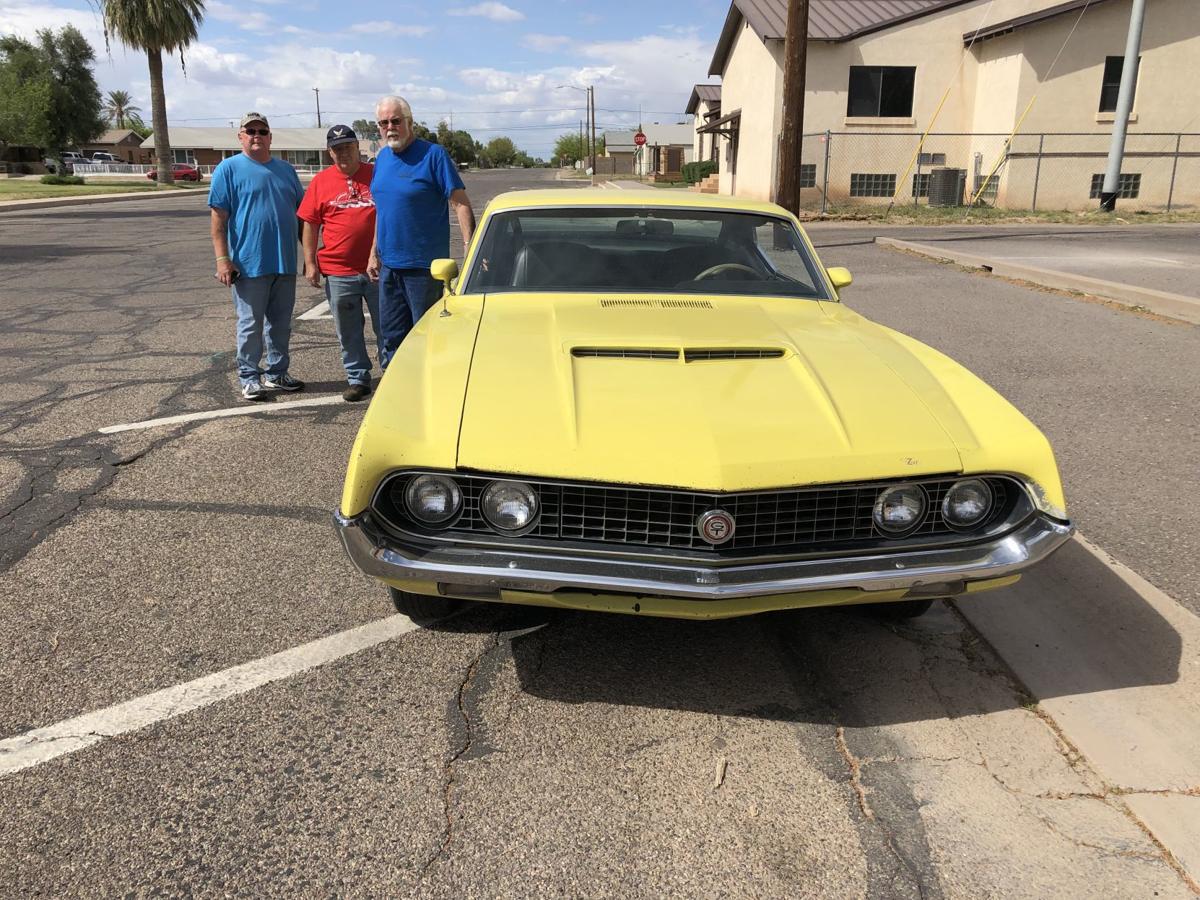 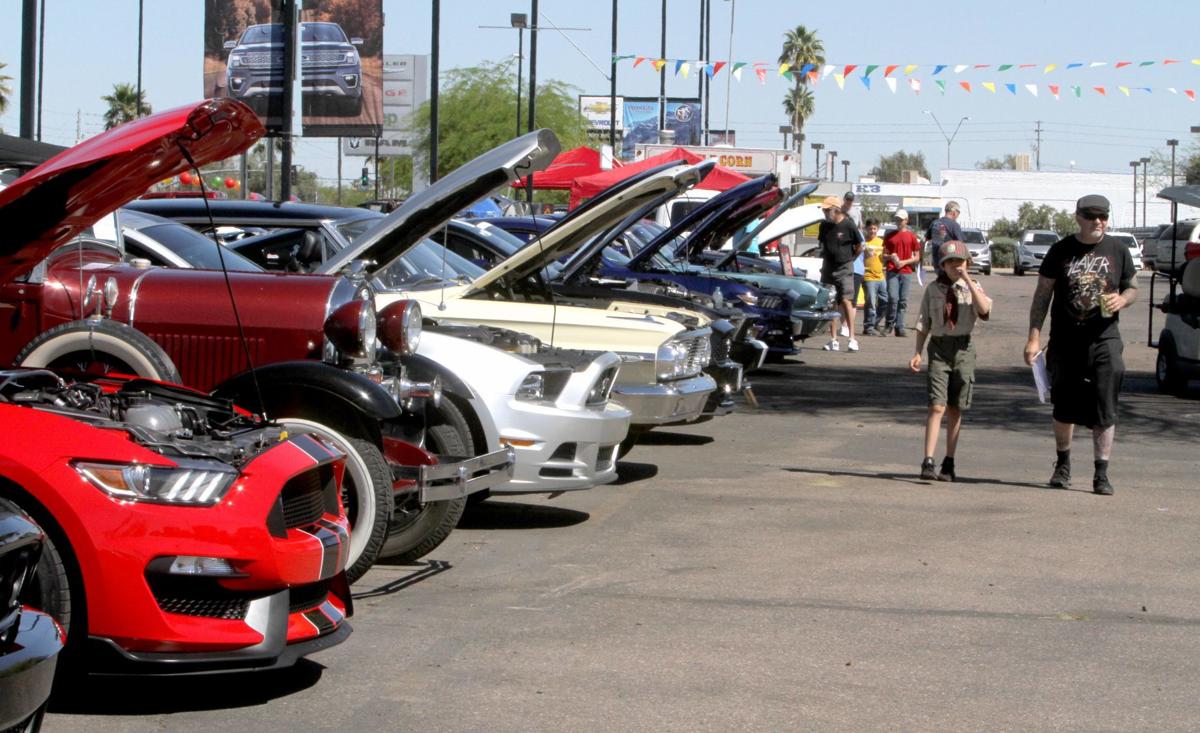 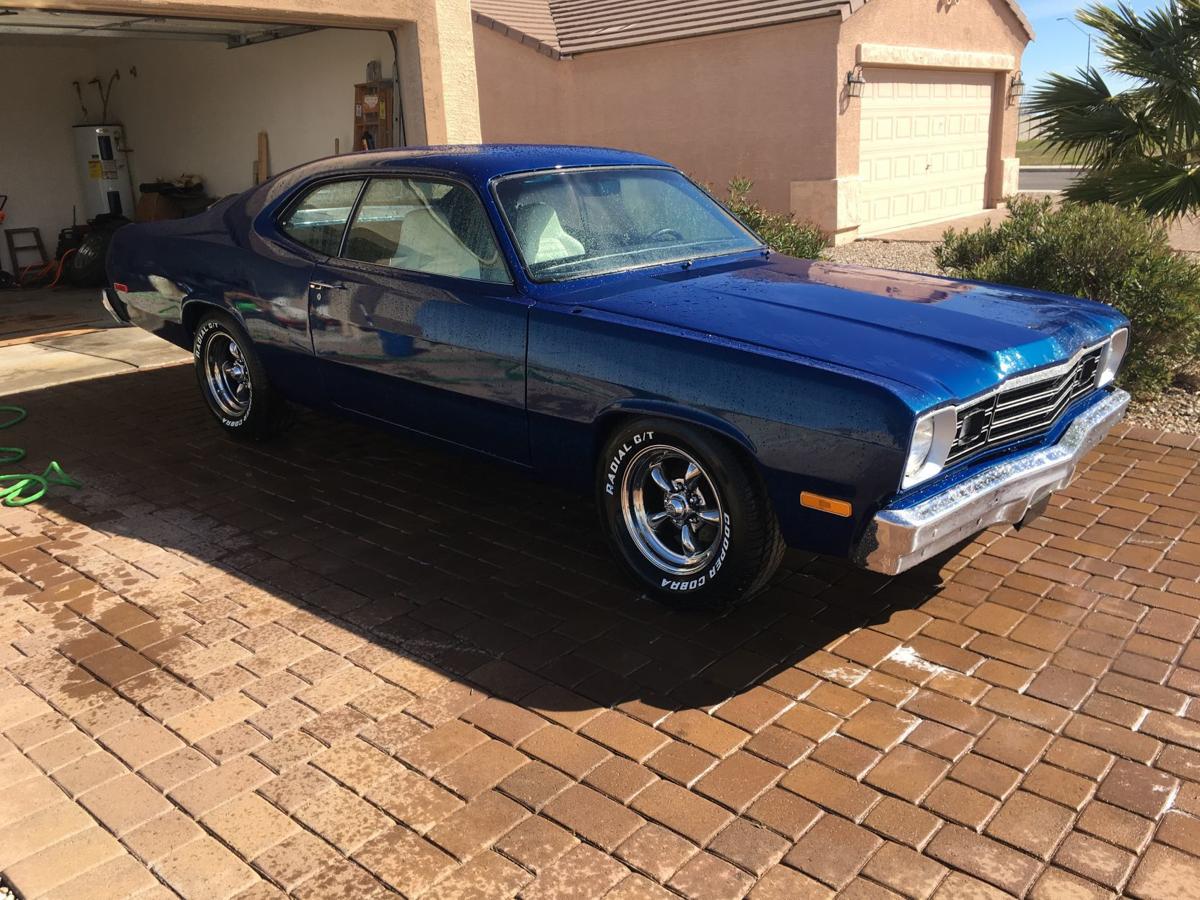 This 1974 Plymouth Duster belongs to Ron Grimm of the Collector Car Club of Coolidge. 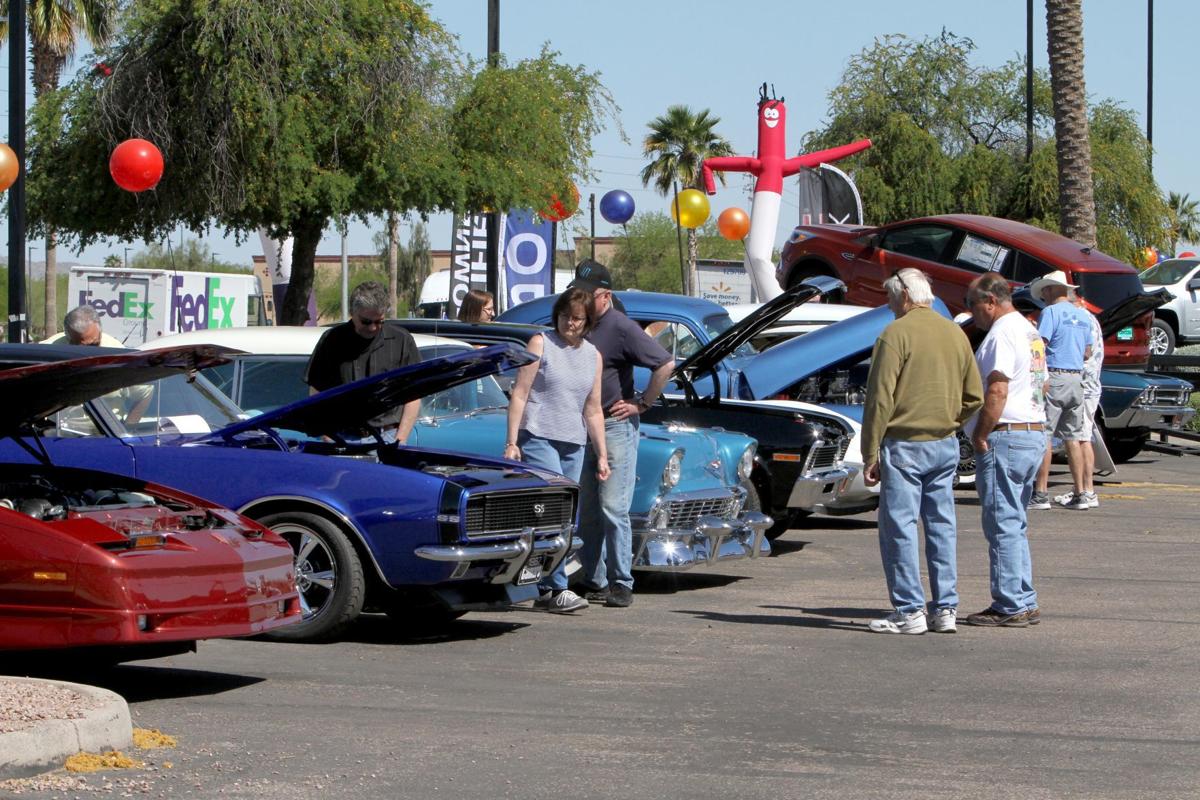 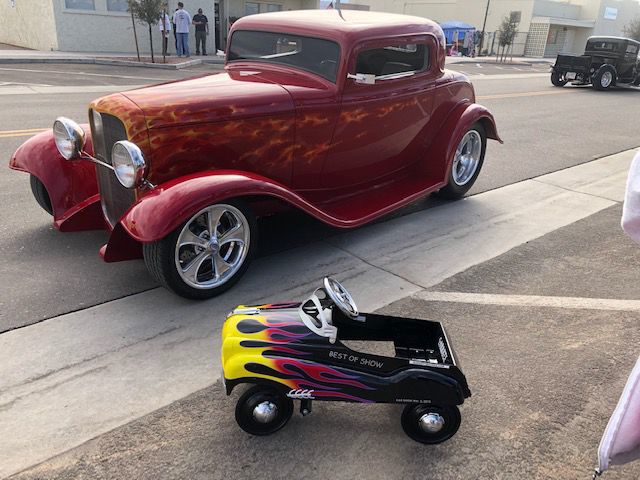 Real cars aren't the only ones you'll see at a Collector Car Club of Coolidge car show.

Lola DeSmith sits next to her husband’s 1966 Ford Mustang coupe during a car show in April at Glenn Jones Ford in Casa Grande. Lola was also showing her 2014 Ford Mustang GT California Special at the show sponsored by the Desert Sky Mustangs car club.

This 1974 Plymouth Duster belongs to Ron Grimm of the Collector Car Club of Coolidge.

Real cars aren't the only ones you'll see at a Collector Car Club of Coolidge car show.

Whether it’s the connection the owner senses with years gone by, the powerful surge forward the driver feels when pressing down on the gas, or the meditative state the enthusiast experiences tinkering with engines and seeing results, some people find joy in driving and maintaining their automobiles.

That love of cars and the call to community service come together for two clubs in Pinal County, the Desert Sky Mustangs and the Collector Car Club of Coolidge.

Ford introduced its newest car model, the Mustang, at the New York World’s Fair on April 17, 1964, and it took off, well, like a Mustang. It appeared in two 1964 movies, “The Troops of St. Tropez” and “Goldfinger,” and Wilson Pickett had a hit in 1966 with “Mustang Sally.” Movie star Steve McQueen drove it in a chase scene in 1968’s “Bullitt.”

It was the first “pony car,” a sporty high-performance coupe that was also affordable. There are even two museums, one in Alabama and one in North Carolina, dedicated to the Mustang. (Are there any museums for a Toyota Camry?) It’s no wonder then there are likely hundreds of clubs across the United States for Mustang owners.

“There’s a saying we have that if you’ve never owned a Mustang, you don’t understand,” said John Mihalic of Casa Grande, president of the Desert Sky Mustangs Car Club of Arizona, which is based in Pinal County. The club has 43 members, Mihalic said, including people in Casa Grande, Maricopa, Arizona City, Queen Creek, Coolidge and Eloy. “In meetings, I say, ‘people that are friends become family.’ That car can make a group of friends into family.”

Mihalic loves the sound of his Mustang when it starts up, that raw exhaust sound on the older muscle cars. “You don’t get that on today’s cars,” he said.

The club is a 501(c)(3) nonprofit organization sponsored by UltraStar Multi-tainment Center in Maricopa and Jones Ford of Casa Grande. It’s a family-friendly club, and the only membership requirement is to own a Mustang. The muscle cars of the 1960s are as welcome as the fuel-efficient models of the 1970s or any of the more modern versions.

“We’re getting less and less of the classics,” Mihalic said. “People don’t want to put the miles on, and the insurance is too much. In some clubs, it’s nothing but newer cars. We have a good mixture of years.”

The club holds two big annual events: The “All Ford Powered & Mustang Car Show” in November and a “Mustang Roundup” breakfast and poker run in September. Every spring is a smaller “Big Three” car show in which any car made by General Motors, Ford or Chrysler can enter. Normally, all shows and events are “all-Ford-powered Mustang,” Mihalic said, meaning, for example, the engine inside someone’s Mustang can’t be transplanted from a Chevrolet.

The club meets at 9 a.m. on the first Saturday of every month at Golden Corral in Casa Grande, and it has another event or activity at least once a month. At meetings, members go over the previous month’s minutes, discuss events, and sometimes “tackle tech,” Mihalic said, such as tips for getting the car ready for the summer heat or advice on how to fix something.

In June the club holds an annual run to the top of Mount Lemmon. Recently on Facebook, nonmembers who own Mustangs expressed interest in participating, so the club opened it up to all Mustangs. The caravan meets in Casa Grande before driving south and up the 9,159-foot mountain to “enjoy the twists and turns and curves,” Mihalic said. “It’s just a great drive to drive in a Mustang.”

From mid-May to July the club collects packs of water bottles to donate to a food bank. It participates in community events such as Neon Nights and the Electric Light Parade in Casa Grande. Other club events in the last few months have included a visit to The Wall That Heals — a traveling replica of the Vietnam Veterans Memorial — in Casa Grande in March and a parade for Iwo Jima veterans and Vietnam veterans in Sacaton in February.

“We have quite a bit of love here with our cars,” Mihalic said. “It’s just all about having fun with the car.”

Don’t let the website, which appears not to have been updated for a while, fool you — the Collector Car Club of Coolidge is active.

“We don’t have an active computer guy, that’s the problem,” said club President John Hill. “We’re trying to find one, but all of us, we’re in the wrong age group.”

The club started about five years ago, around the time the Artisan Village of Coolidge was being planned. The club was part of a move to “create events” at the Village, but eventually the club separated from the Village. It’s made up of around 10 mostly retired people who live in Coolidge or nearby communities and caught the car bug a long time ago as kids.

“Most of us are old,” said member Skip Laclair.

Laclair moved to Coolidge from upstate New York 10 years ago to escape the cold. As a child, he helped his brothers rebuild the engines on tractors at his family’s dairy farm.

“I remember like it was yesterday. My brothers would be in the barn trying to work,” Laclair said. “‘Give me that half-inch wrench or give me that socket.’ That’s how I grew up. I grew up learning how to tear engines out of cars, putting engines back into cars.”

Ron Grimm came to Coolidge from Illinois seven years ago. As a young teen he helped turn a 1955 Chevrolet Nomad station wagon into a drag-racer and was a “nervous mess” when he turned 16 and drove it for the first time at the drag strip. “By the time I got back in the pits I wanted to take it out again,” he said.

He’s working on a 1974 Plymouth Duster today. He’s installed the interior and replaced the windows and the engine. It needs more work because of a problem with the heads. “Now I get to take it apart again. That’s half the fun,” he said.

Hill’s prized car, actually his wife, Ruth’s, is a 1970 Ford Torino. They got it cheap — Ruth won it in a 1969 drawing from Sears. The Hills have had the car ever since.

“It’s got the big engine, four-speed, and it’s got all the trick stuff,” he said.

The club holds meetings at 6:30 p.m. the first Wednesday of every month at El Dorado Insurance, 299 W. Central Ave., where they spend most of the time planning the next car show. On the first Friday of each month they have informal “cruises,” during which they meet at Sonic restaurant in Coolidge at 6:30 p.m. Club members and anybody else is welcome to show up with their car and enjoy “BS,” “talk” and “tater tots.”

“The whole thing is about taking your cars out and having fun and driving them,” Hill said.

Hill said the club has shifted from two to one car show per year. The next one will be in the spring. Money from the club’s car shows is donated to local causes, including the Disabled American Veterans and Coolidge High School Junior ROTC. The club also donated to local boxer Caleb Jeffries and boxing trainer Jesus Ramos for equipment.

To add variety to upcoming shows, the club is encouraging the restoration of pedal cars, miniature tractors and scooters such as those that Cushman manufactured until 1965.

Hill, who was born and raised in Coolidge, started working on Cushman scooters in junior high school at his friend’s father’s car dealership in Mesa after it closed for the night. He and his friend found the keys to the mechanics’ toolboxes, and their love of engines and cars took off.

“All through high school we were working on cars,” Hill said. “I ended up with a 1956 Ford pickup that was really a custom; it was a sharp pickup. I just always had hot rods and nice cars. I built ’em. I built a Cobra. ... This is the kind of stuff we’ve done all our lives.” | PW

Pinal County is more than 5,000 square miles, so it’s a difficult place to get around for pe…

ORACLE -- The Saddlebrooke Cyclemasters ride their bicycles around.

The California Zephyr was a passenger train that ran between Chicago and Oakland, California…

Car enthusiasts see one track open, another on the way

ELOY -- At the Dust Bowl Theater on Main Street, J.W. Tidwell could watch two movies and a cartoon, eat popcorn and a candy bar and drink a so…