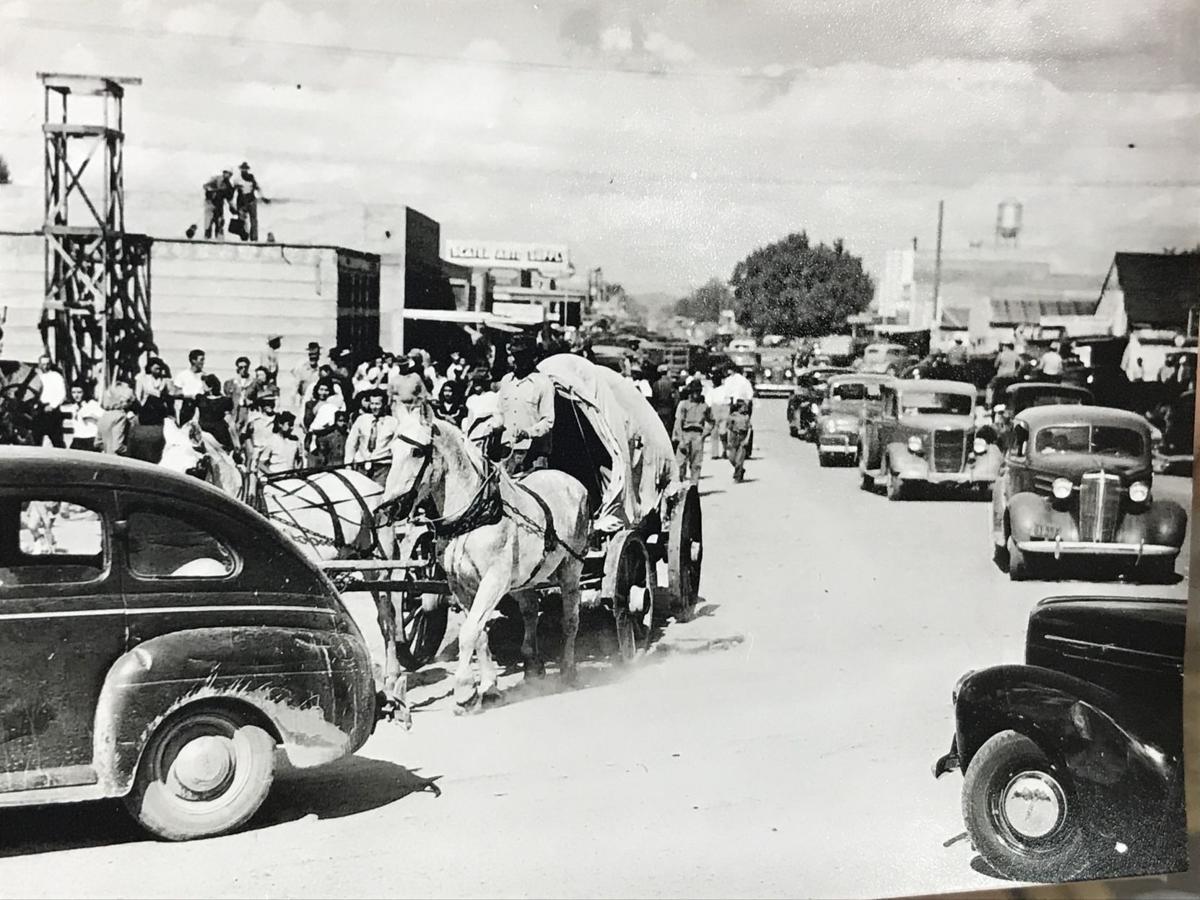 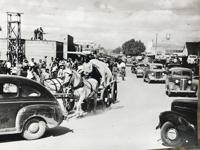 This photo, estimated to be from the late 1920s or early 1930s, looking out on Main Street from the intersection of Central Avenue, depicts what a weekend in Coolidge looked like more than 90 years ago. In the far right corner you can see the Coolidge water tower, which still stands today and now lights up the night sky thanks to an improvement project that was completed last year. 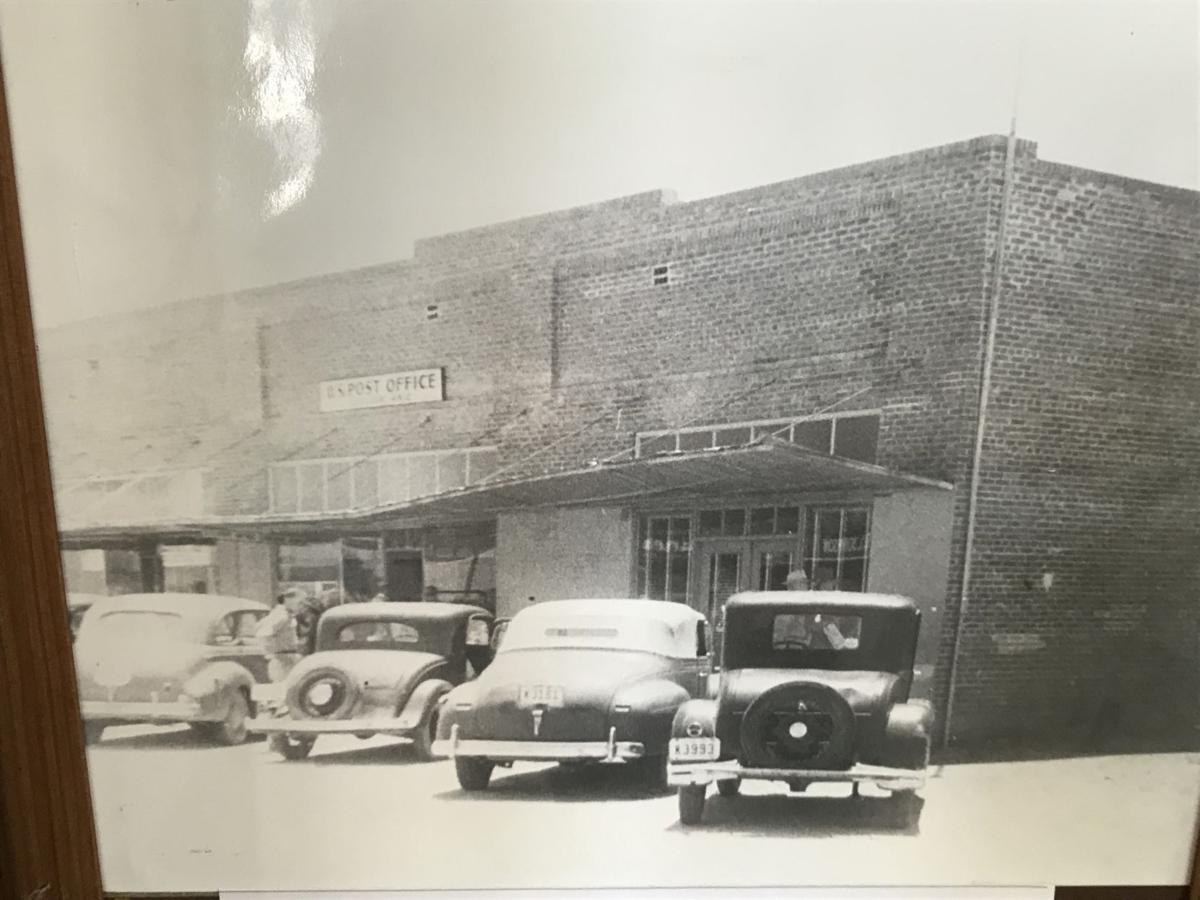 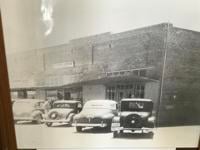 Picture of the Coolidge post office when it was located on Coolidge Avenue, one of several streets that make up the historical loop, in 1936. Though downtown revival efforts may never restore the city’s center as a bustling center for retail, improvements along the historical loop have gone a long way to attract businesses and customers to the district while also preserving the historical “character” of the area. 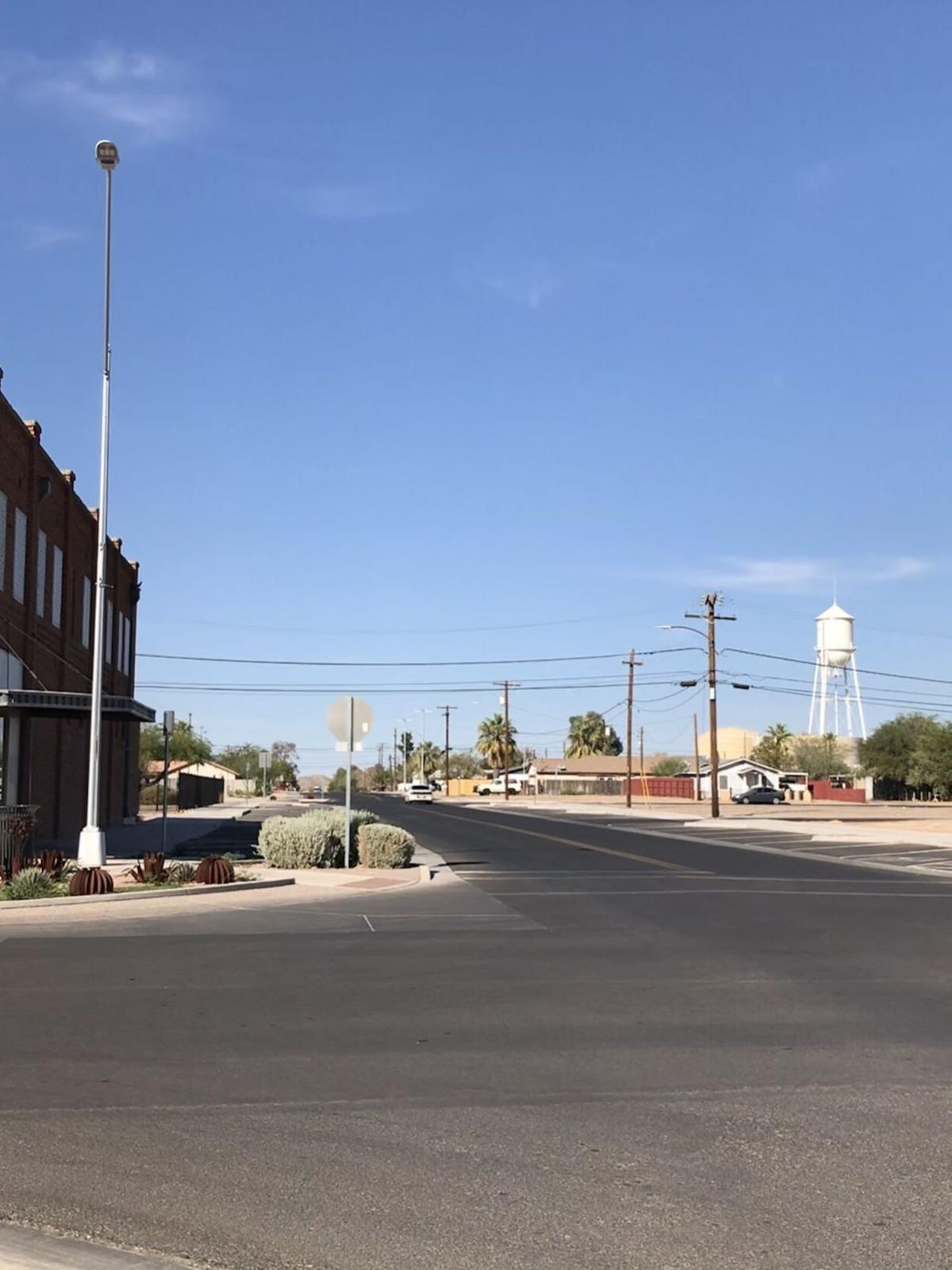 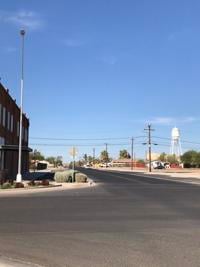 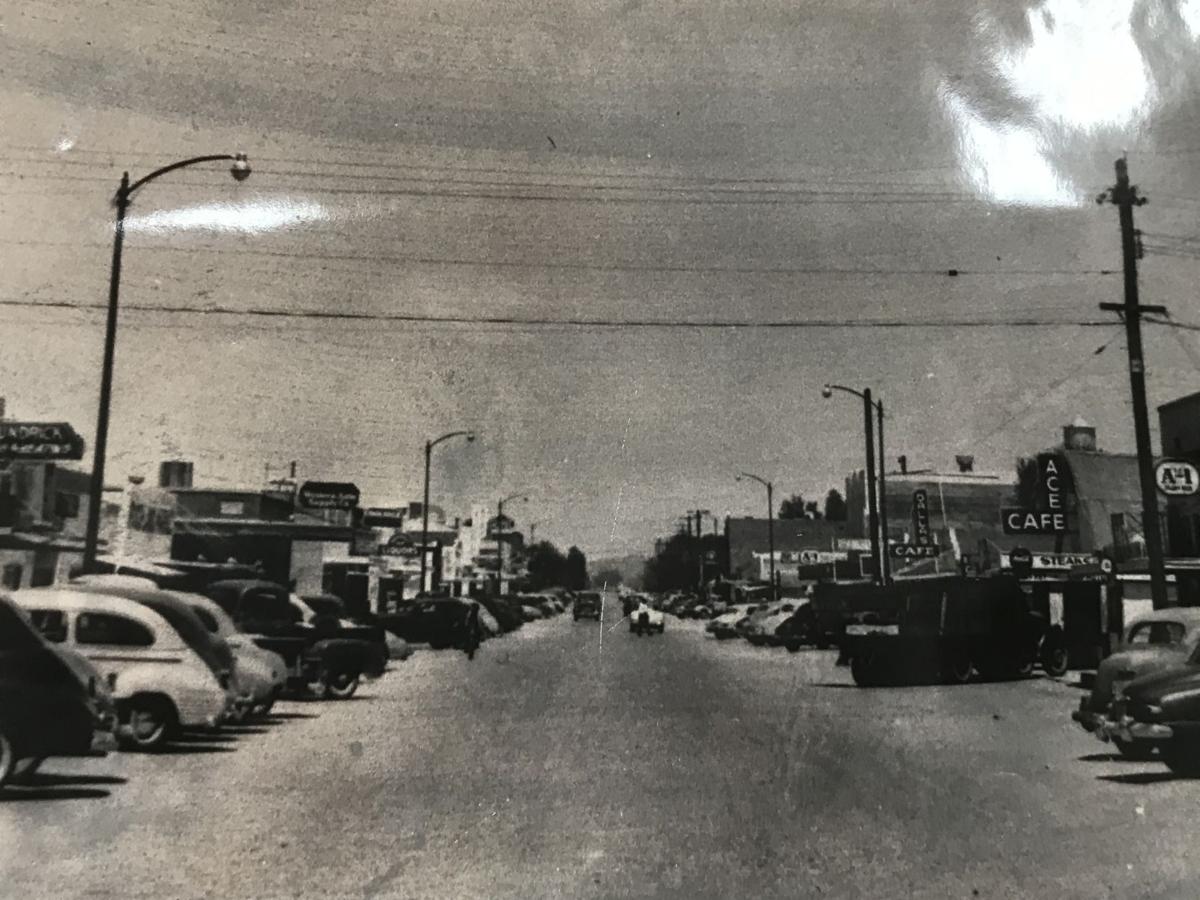 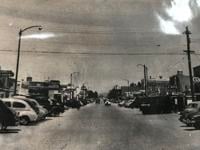 This photo, estimated to be from the late 1920s or early 1930s, looking out on Main Street from the intersection of Central Avenue, depicts what a weekend in Coolidge looked like more than 90 years ago. In the far right corner you can see the Coolidge water tower, which still stands today and now lights up the night sky thanks to an improvement project that was completed last year.

Picture of the Coolidge post office when it was located on Coolidge Avenue, one of several streets that make up the historical loop, in 1936. Though downtown revival efforts may never restore the city’s center as a bustling center for retail, improvements along the historical loop have gone a long way to attract businesses and customers to the district while also preserving the historical “character” of the area.

In big cities, the history associated with the downtown is often forgotten — or in some cases reduced to street names and the occasional mural or memorializing statue.

In small towns, however, downtowns are often viewed as the heart of the community and associated with favorite shops, restaurants and local boutiques that once kept city streets bustling with activity.

Coolidge City Manager Rick Miller understands downtowns and knows just how important they can be in the revitalization efforts of any community.

“The downtown is basically the center of your pride,” Miller said. “It’s the soul of your community and if your soul begins to rot away, then what’s that do to the rest of you?”

For years now, since being hired on as the growth development manager for the city of Coolidge in 2012, Miller has overseen the city’s effort to re-energize the downtown district.

And a large portion of that focus has centered on reconstructing the historical loop.

Coolidge’s historical loop is made up of the intersections of Arizona Boulevard, Central Avenue, northbound Main Street and eastbound Coolidge Avenue. The loop may not look the way it did 50, 60 or even 70 years ago, but the connection of roadways is still a vital part of the community’s future.

City leadership saw the connection as so significant that they decided to invest funding and time into reconstructing the major avenues and streets that make up the loop, starting with improvements to Coolidge Avenue in 2014.

Those improvements were followed up by reconstruction on Central, and later repairs to the stretch of Central in front of City Hall. Roadwork on the loop was finalized with the completion of improvements along Main Street between Coolidge and Pinkley avenues.

Though the roadway improvements have been completed, Miller said there’s still work left to be done on the historical loop — especially when it comes to beautifying Main and Central with landscaping and other additions.

But the updates being made to the downtown go beyond road construction and landscaping. In 2016, the city was gifted the property where Cohen’s Department Store once stood.

At the site where the vacated Cohen building collapsed, there is a new plan in the works for the property. As part of an agreement between the city and the Pinal Hispanic Council, the property is now destined to become home to a new building that will serve as PHC’s headquarters in town.

“We’ll see basically a vacant property that used to have a building on it replaced by brand new construction in the downtown, which really doesn’t happen very often,” Miller said.

And the city isn’t the only one that has prioritized improving buildings at the city’s heart. Pinal County has also invested money into remodeling two buildings along Central, the Pinal County Elections Department and the Central Pinal Justice Court.

The changes have uplifted the look of the area and brought more employees to Coolidge’s town center, Miller said, making the community’s downtown more active.

Downtown improvements, however, are not only limited to efforts made by local governments.

A casual stroll to some of the major intersections of the loop reveals structures that have been the focus of facelifts valued at hundreds of thousands of dollars by new and established businesses alike. They range from interior and exterior renovations done to the Coolidge Veterinary Hospital to facade improvements and a mural project completed by Top CDE.

Other renovations have come through partnerships with the local organizations that lease city buildings at little to no cost. In exchange, those organizations have been asked to put at least $100,000 in funding into rehabbing those structures over the duration of their lease.

In most cases though, those nonprofits have quickly met or exceeded that minimum investment before opening their doors to the general public. For local groups like the Pinal County Disabled American Veterans Chapter 36 and the United Dance Group, the money, labor and time put into their buildings has completly transformed them inside and out.

But for some, building improvements are just the start of what they hope to accomplish downtown.

In the case of businesses like Pita Patio Grill, the mission is also to create a more lively atmosphere downtown — not only by attracting customers seeking good food and live entertainment, but also by attracting other businesses, ranging from food trucks to brick and mortar retailers, coffee shops and restaurants along the Coolidge Avenue stretch.

In the midst of a global pandemic, that objective has been more difficult for Pita Patio and restaurants like it, Miller noted, as events and large gatherings remain mostly on pause.

While COVID-19 may have slowed traffic to the area, the ongoing situation hasn’t stopped new businesses from opening. Recent additions to the options downtown provides local residents and visitors include a brand new ice cream parlor on Main Street and the new Nana’s Coffee Shop located on the same property as Pita Patio.

With features that date back to the days when the city’s limits were far less expansive than they are today, and the center of town was primarily where the majority of residents did their shopping, for city officials like Miller, the primary goal is to maintain “flexibility” in the district while also preserving its defining characteristics.

“Our general plan basically wanted to continue that character in our downtown area — to try to preserve it and to build our ordinances in a manner that would encourage that and not defeat it,” Miller said.

In some instances, that means zoning codes must be adjusted to make exceptions for design elements that in other sections of town would be considered violations. Examples include permitting property owners to build structures and parking lots to the property line.

Aesthetic enhancements have also been made, with the crowning jewel being the lighting of Coolidge water tower. Completed last year, the project was part of a joint effort between the city and Arizona Water Company to repaint and light the 20th century-style water tank that sits about 120 feet above Coolidge.

Since the project’s completion, the tower has served as the identifying component of downtown’s backdrop, Miller said.

While continuously improving the district and laying the ground work to enable downtown businesses and organizations to do the same will likely always be a priority for the city, Miller says it’s unlikely Coolidge’s town center will have the same feel as the downtowns in the Valley.

“We can never try to be someone that we’re not,” he said. “We can never be a Mill Avenue because we don’t have a major college and university students to support the local businesses. We just have to be unique to Coolidge and capitalize on the strength that we have here.”

For Coolidge, that strength may just be speciality businesses whose markets extend beyond the city’s boundaries, like the Mediterra Bakehouse.

Miller has ideas he is willing to share, like the possibility of creating a “culinary experience” along Main Street with the addition of a few more shops that complement the bakehouse and ice cream parlor already housed on the street. Whether or not that concept will become more than an idea he leaves up to the judgment of local entrepreneurs and the type of niches they feel they can cater to.

Thus far, however, downtown’s biggest strength has been businesses and professional services, notable through the number of court services, government agencies and doctors’ offices that have opened or relocated to the district.

It’s difficult to determine what Coolidge’s downtown will look like in the next five to 10 years, but for Miller one thing is evident when it comes to the future — things will change.

“I don’t know that we’ll ever be able to replicate what we did in the old days, because it was serving a different clientele then — farmers and people that were picking cotton in the fields,” he said. “It was just a different time, different culture and a different customer base. I think over time as things change, you just have to always keep on your guard and figure out what’s best for today. And then always be ready to change.” PW