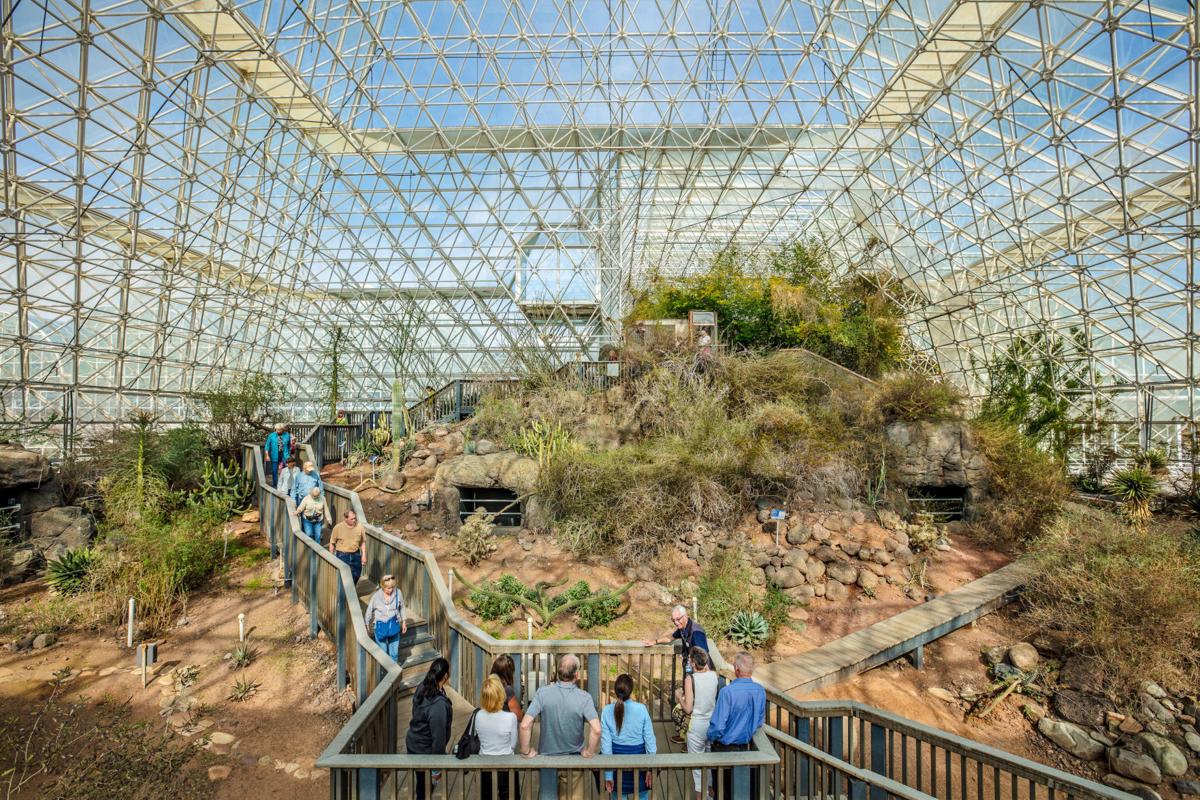 Visitors embark on a tour at Biosphere 2’s desert biome. 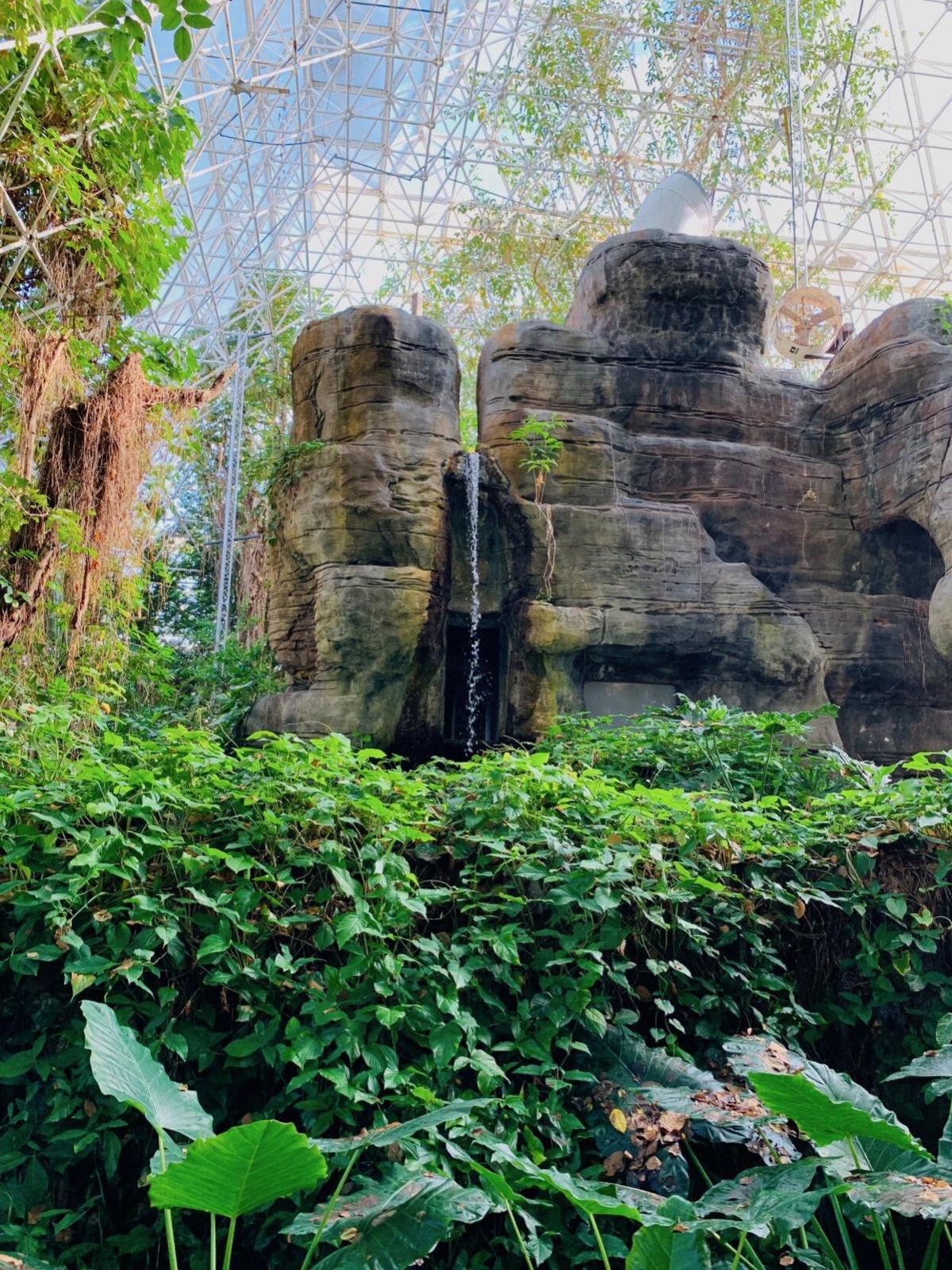 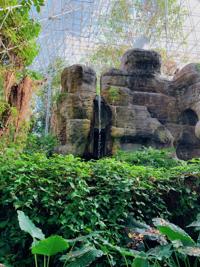 The rainforest biome, at the north end of Biosphere 2, was designed to simulate several tropical rainforest habitats. 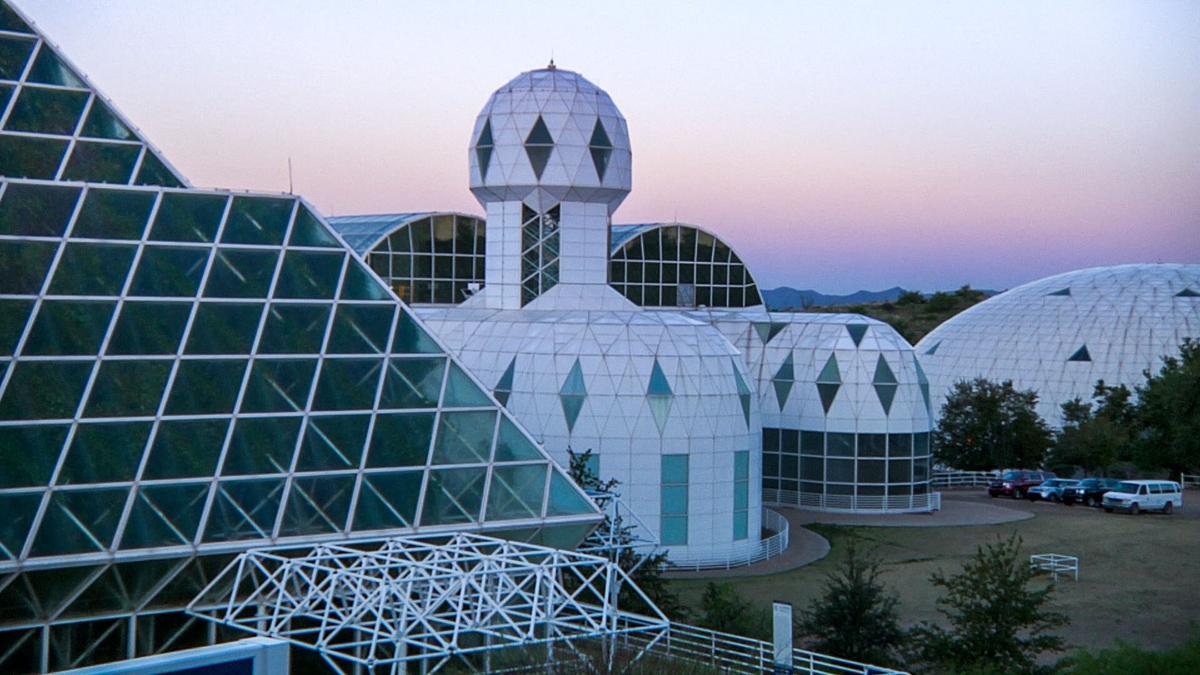 Biosphere 2 normally attracts more than 100,000 people every year, but employees are working to attract even more.

Visitors embark on a tour at Biosphere 2’s desert biome.

The rainforest biome, at the north end of Biosphere 2, was designed to simulate several tropical rainforest habitats.

Biosphere 2 normally attracts more than 100,000 people every year, but employees are working to attract even more.

There is perhaps no place out there more aware of the constantly changing world than Biosphere 2. Those changes, after all, are what it’s all about.

Biosphere 2 spans more than 3 acres in southern Pinal County near Oracle. Inside its massive sealed glass structure are five “biomes” that recreate different climates from around the world. These include ocean with coral reef, mangrove wetland, tropical rainforest, savanna grassland and fog desert.

Through mechanisms called air handlers, the facility is able to manipulate temperatures and humidity levels to mimic the climate properties of vastly different places around the world, all in the heart of the Sonoran Desert. Researchers can then change different aspects of that environment to see what impact it has on the entire ecosystem.

The goal of all this is to increase understanding of the world around us, which could lead to solutions for some of the biggest challenges facing civilization today, such as climate change and water shortages. Through the University of Arizona, researchers have conducted studies that are helping to lead the path forward on a global scientific level.

Even more behind the scenes, other people are monitoring changes of a different kind. They’re not quite scientists, but they’re experts in their own right and what they discover about shifts in tourism might affect the area as a whole as the county tries to bring in more people from elsewhere to see the unique offerings in Pinal.

John Adams is the deputy director at Biosphere 2 and has been working there for 20 years. So he knows how much the facility has changed, along with the strategies to get people to visit. What hasn’t changed, he said, is the mission to create a research facility that will continue to produce groundbreaking work for years to come while also bringing that to as many people as possible so they know their own place in the world.

“It’s definitely one in the same to us,” Adams said. “We pride ourselves on being able to bring the science that’s ongoing there to the visitors there at Biosphere 2. We’re not an amusement park. We are very much an educational facility. But I think we have a strong attraction component because of the iconic value and nature of the facility ourselves.”

Adams describes modern tourists as increasingly sophisticated, meaning that because of the internet they are able to research everything and make educated decisions about how best to spend their time and their dollars. Gone are the days where people hop into a car and drive down the road, pulling off to visit anything that catches their eyes. Now, there is much more planning and much firmer decisions.

For a place like Biosphere 2, this requires adapting the offerings and marketing to bring in those sophisticated travelers. It’s a challenge because they need to create high expectations in order to stand out from a crowded field trying to lure tourists to admission gates, but also because they then need to deliver on those expectations in order to avoid the bad reviews that can be fatal to any attraction.

To avoid those reviews, Biosphere 2 is catering much more to the individual experience. They have recently rolled out listening devices that people can put in their ears in order to hear their guides as if they are standing right next to them. Previously, due to the atmospheric noise in the facility, those standing in the back have had a hard time hearing. They have also added several new tours to cater more to individual tastes.

A major challenge for Biosphere 2 is that science just isn’t that appealing to some people, especially if there aren’t cool animals to see or athletic opportunities. So the staff read reviews to see what people would like to see and if they can accommodate that without compromising the mission of the facility, it makes that much stronger of a destination.

Adams acknowledges that Biosphere 2 has an advantage in the modern age when stunning visuals matter more than ever. Many people are always looking for that next opportunity to spruce up their Instagram page, and what’s better than posing in front of a rainforest and an ocean all in one day? That’s not even mentioning the exterior of the facility, which is a sight unlike any other and something that could add some spark to someone’s social media.

That’s good, because the younger someone is the more likely they are to have their faces pointed at their phones as opposed to taking in what’s around them. When there is so much beauty around all the time, phones are much less likely to be a major distraction. Adams does have a team that monitors how much activity Instagram, Twitter and Facebook are seeing out of the location.

In the years to come, that data will be used to develop more of what tourists seem to want, which is a multimedia experience and digital connectivity. This could also be a way for people to dive deeper into what’s going on at the facility if they so desire, which means that what is typically seen as a distraction could actually immerse them more into what’s going on.

Another advantage Biosphere 2 has over other attractions is an increased awareness among the population as a whole of the ever-changing environment. Adams said the people who visit tend to have more of an appreciation of what is going on around them, and they want to help support places that are trying to do something about it.

“We definitely benefit from that, and that’s a tribute to the people who originally constructed the Biosphere,” Adams said. “At the end of the day, people want a very positive and entertaining experience. We don’t have the world’s tallest roller coaster, or any roller coaster for that matter. But what we do have, I think, is a very informed experience in the context of things that are impacting us and the world.”

Tourist attractions are often tied to the communities they are located in. That’s why amusement park builders try to build as close to major metropolitan areas as possible. If the area itself is a place people want to go to explore, eat or have a good time, that helps an attraction because they don’t have to bring them there all by themselves.

At first sight, Biosphere 2 might be seen as at a disadvantage in that regard. For those from outside Arizona, Oracle is likely not a place of any knowledge. It’s located near Tucson, but not exactly close enough for a short drive from a hotel. People have to purposefully go there. That’s why Adams sees Biosphere 2’s role in the community as vital. If Oracle, Mammoth and San Manuel can develop into a place people want to stay for more than a day, that will make the customer base for the facility that much stronger.

And there is already plenty of progress being seen on that front. Arizona Zipline Adventures has done very well as a fun experience for those who visit Oracle, and the area’s art scene has been developing substantially as more and more people recognize the beauty and seclusion of southern Pinal County.

“When people ask us what else there is to do or where to go grab a bite to eat, we make a conscious effort to mention options that we have locally,” Adams said. “Because it is important for the places around here that people not just come here for the Biosphere or the Zipline. The greater the economic impact of one place, the greater it is for everyone.

“Would we like to have a much larger surrounding area, to be in the middle of downtown Tucson or a metropolitan area? Would that greatly benefit Biosphere 2? Absolutely,” Adams said. “But in that same breath, what makes Biosphere unique is that when you’re here, not only is the facility spectacular, but the grounds of the area and the views of the Catalina Mountains are unrivaled.”

In a typical year, Biosphere 2 receives a little over 100,000 people. Like all destinations, that number ebbs and flows with the economy, but the past three or four years have been on the rise. About 60% of those visitors are ages 55 and up, so Adams is looking for ways to get younger people coming. There are of course plenty of school groups that take a long field trip to take it all in, and he hopes there will be more younger families taking their kids to see it.

The facility has been working with educators and experts to develop a curriculum so visiting Biosphere 2 can be much more than a field trip for students. It can actually be a part of their schooling that teachers can use in a more productive way.

Only 10% of Biosphere 2’s visitorship are repeat customers, despite the constantly changing research going on there. While Adams hopes that easier access to the facility’s content will start to change that, he knows most people see their visit as a “bucket list” item.

It’s up to them to make sure the experience lives up to that kind of life significance.

ORACLE — The University of Arizona’s Biosphere 2 in Pinal County will commemorate the 50th anniversary of Earth Day by hosting a virtual earthfest.

Biosphere 2 will welcome back visitors with nighttime driving tour

ORACLE — After tours were halted due to COVID-19, visitors will once again have the opportunity to visit Biosphere 2 — from the safety of thei…

Program brings Biosphere 2 to classrooms around the world

ORACLE — Field trips are off the table at many elementary, middle and high schools worldwide, so the University of Arizona’s Biosphere 2 has m…

Choose your own adventure at reopened Biosphere 2

ORACLE — The University of Arizona’s Biosphere 2 has reopened to the public.

Biosphere 2 study: Tropical forests may be more resilient to rising temps than predicted

ORACLE — Step inside Biosphere 2’s tropical rainforest, which thrives beneath an enormous glass dome, and visitors are met by a wall of warm h…