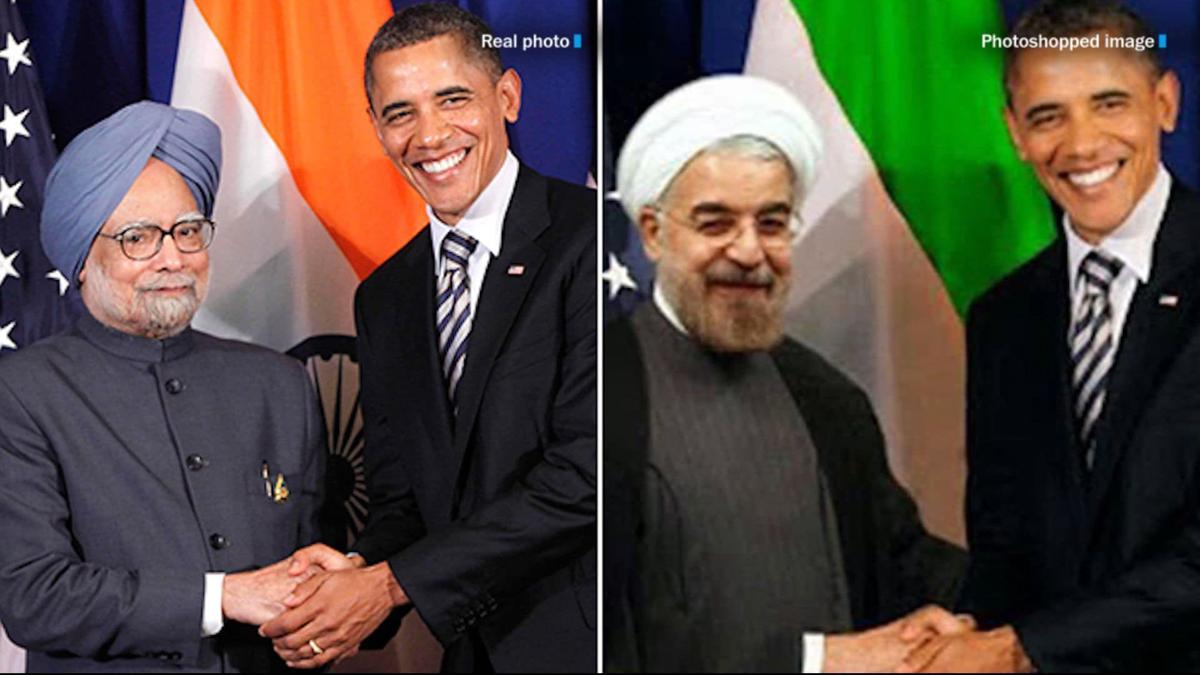 The picture on left came from a 2011 meeting former President Barack Obama had with now-former Indian Prime Minister Manmohan Singh, who was replaced by Rouhani in the picture Rep. Paul Gosar, R-Ariz., shared. 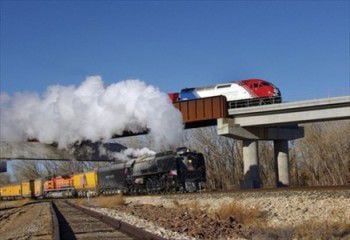 The picture on left came from a 2011 meeting former President Barack Obama had with now-former Indian Prime Minister Manmohan Singh, who was replaced by Rouhani in the picture Rep. Paul Gosar, R-Ariz., shared.

Ten years ago when I was editor of the Standard-Examiner in Ogden, Utah, we unintentionally published a photoshopped image on page one of the newspaper.

It was a photo from a freelance contributor of a modern commuter train passing over the historic Union Pacific steam engine No. 844 as both approached Ogden. At the time I thought it was an iconic image that captured the past and present of the evolution of the locomotive in American society, with the newer train moving past the older locomotive, which was delivered in 1944.

The phony image turned out to be a composite photo of two pictures of real events taken 10 minutes apart. We didn’t know it was a composite photo upon publication, and if we had we would have disclosed that the image was an illustration.

We learned the photo was fake a week after publication when the photographer confessed after people began questioning its authenticity. I then wrote an apology to readers because publishing the photo was a “news deception that goes against the principles of photojournalism.”

The apology actually became news itself and was picked up by The Associated Press and became a topic of discussion for photojournalists and professors.

Last week our own congressman Rep. Paul Gosar tweeted out (which is the same as publishing) a photoshopped image of former President Obama shaking hands with Iranian President Hassan Rouhani.

It turns out the image was manipulated to replace a former prime minister of India, Manmohan Singh, with Rouhani. The original photo was taken in 2011. Gosar shared the fake photo saying, “The world is a better place without these guys in power.” The tweet was shared more than 5,000 times.

Other Twitter users immediately highlighted the tweet as false. Instead of simply apologizing, Gosar took the low road. After being criticized by the press for posting the false photo, Gosar called them “dim-witted reporters,” adding in a tweet: “No one said this wasn’t photoshopped. No one said the president of Iran was dead. No one said Obama met with Rouhani in person.”

I don’t know what was worse, tweeting out the fake photo in the first place or the lame excuse that came afterwards. His defense is like saying “I was lying, but I never said I was telling the truth, so it is OK.”

In this day and age, there is no use for apologizing and moving on. It is the era of the pushback accompanied by outrage. This practice is making politicians, and yes, some members of the press, look like uncompromising fools.

In a note of irony, Gosar has made a habit of calling the press and reporting he doesn’t like “fake news.” His antics on his Twitter account have also raised eyebrows.

In November, the congressman made headlines for supporting Jeffrey Epstein conspiracy theories doubting that the wealthy sex offender committed suicide. Gosar posted 23 tweets, where the first letter of each tweet spelled out “Epstein didn’t kill himself.” A New York medical examiner ruled that Epstein’s death in jail was suicide. Since then conspiracy theories have flourished.

He has also been mocked on Saturday Night Live for his antics.

His family must be so proud.

In the last election his siblings endorsed his Democratic opponent, going so far as to record video testimonies pleading with voters not to re-elect their brother.

But this week, I saw a ray of hope that Gosar may be turning over a new leaf.

When fellow U.S. Rep. Ann Kirkpatrick, who happens to be a Democrat, announced she was entering rehab for treatment of alcohol abuse, Gosar actually tweeted out a compassionate and sympathetic response to the news.

Gosar, who unseated Kirkpatrick in a 2010 House race, tweeted that he’s keeping her in his thoughts.

“There are many stressors in this business and at every reception and dinner, alcohol is provided,” he wrote. “It’s easy — too easy — to become addicted and I wish god speed to my colleague, my friend and my fellow Arizonan. God bless you Ann.”

Maybe there is hope for Gosar. That is, unless he’s faking it.

You can reach Andy Howell at ahowell@pinalcentral.com.

Arizona is about to tackle the most polarizing political event of the new decade.

Howell: 'Twas the night before Christmas in Pinal

When I was a kid, every Christmas Eve my father would read to me and my brothers the poem “A…

Howell: On behalf of speeding sinners, Milstead should pay

“Unfortunately, at the speeds people are driving — 80 to 85 mph — when something goes wrong …

Howell: Breast Cancer Awareness Month is to support women, not the sheriff

October is Breast Cancer Awareness Month. In honor of this worthy cause, our sheriff is sell…

Howell: Trying to get around an I-10 closure can put you in a pickle

Last Saturday my wife and I journeyed down to Tucson to watch the University of Arizona basketball team take on Colorado in an early afternoon game.

Comedian Sarah Silverman had a party recently and invited many of her peers in comedy. She reportedly had a sign at the door that said “No pod…

Howell: The monster behind conspiracy theories

As wildfires rage out of control in California, Oregon and Washington, authorities have also been busy trying to put out fires on social media.

No doubt about it.