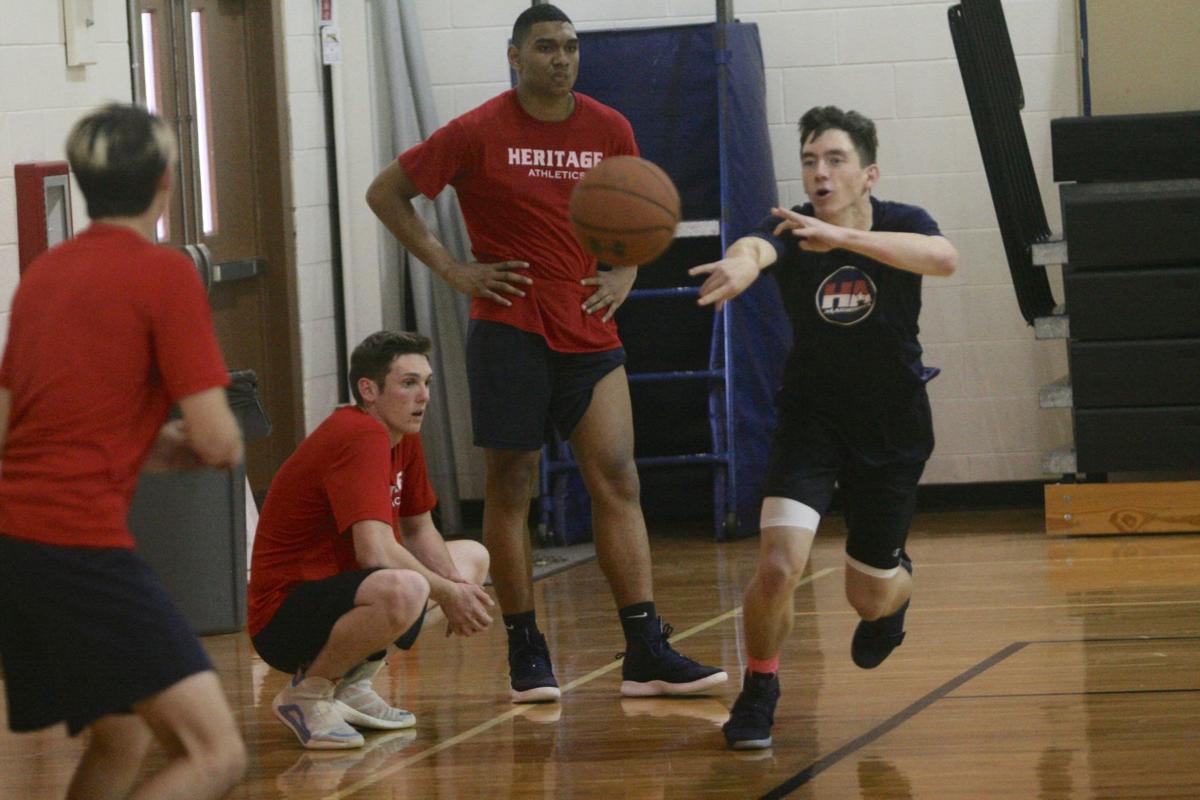 Logan Porter, right, starts one of Heritage Academy-Maricopa’s fast-paced drills during a practice. 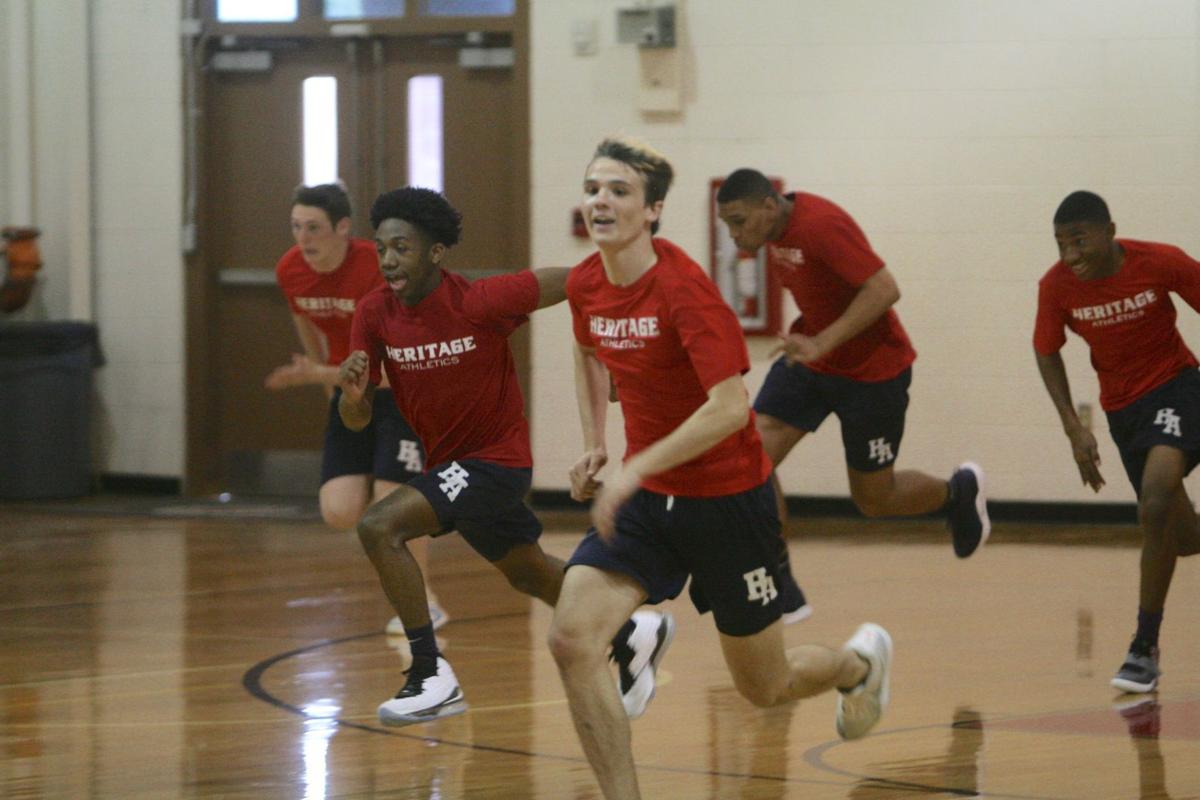 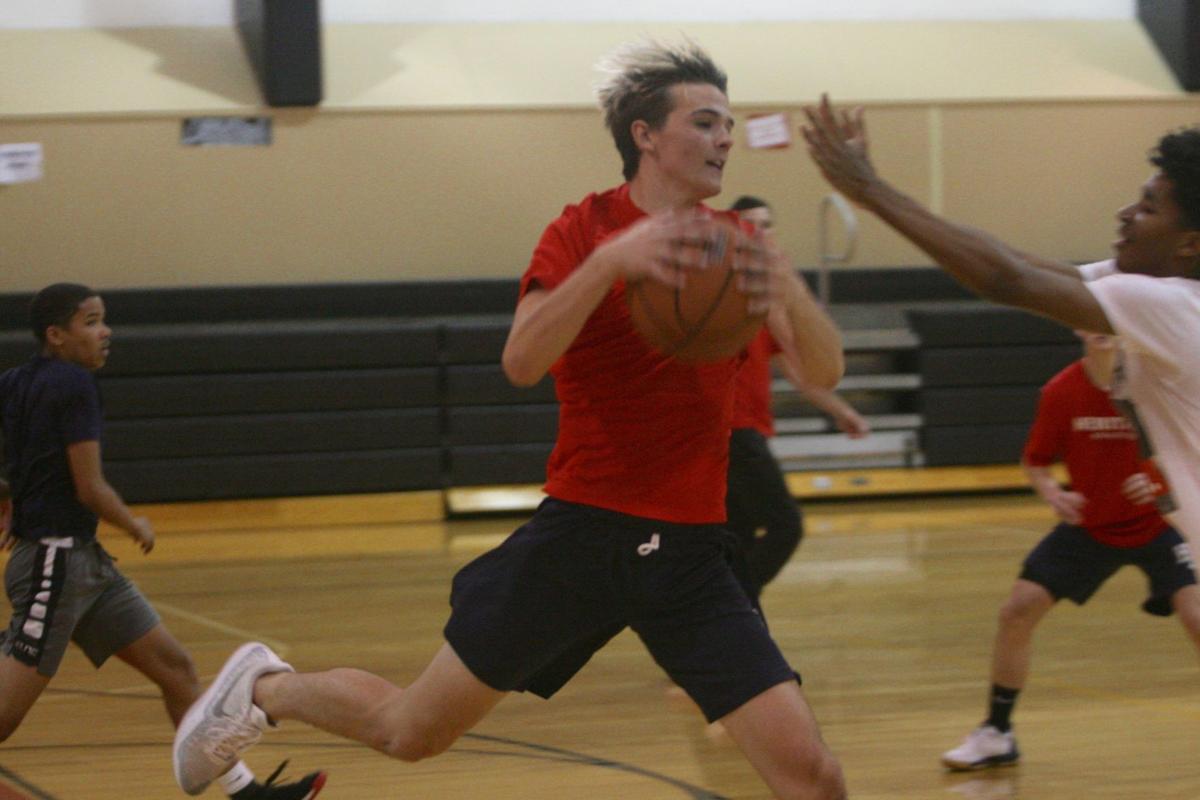 Josh Deakyne flies through a fast-paced drill during practice. 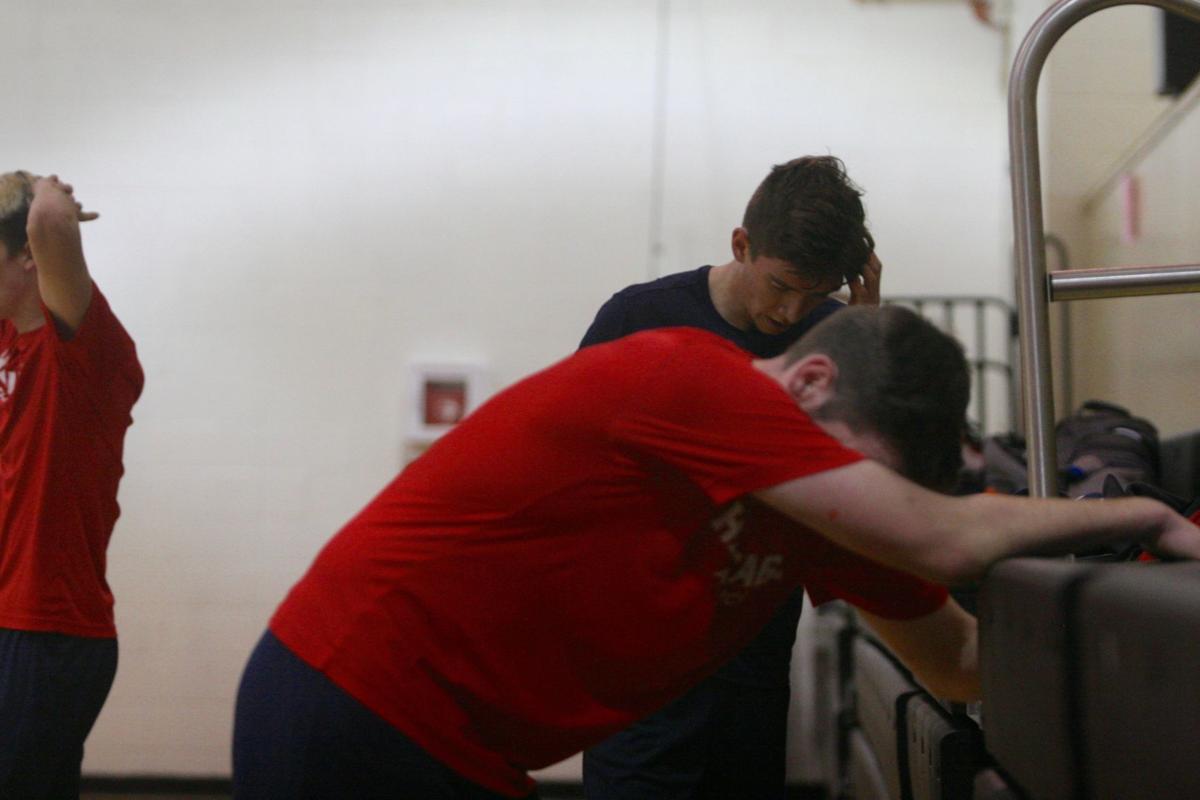 Players on the Heritage Academy-Maricopa basketball team recover after running suicides during a practice.

Logan Porter, right, starts one of Heritage Academy-Maricopa’s fast-paced drills during a practice.

Josh Deakyne flies through a fast-paced drill during practice.

Players on the Heritage Academy-Maricopa basketball team recover after running suicides during a practice.

James Deakyne’s voice can be heard throughout the Ak-Chin Indian Community gym on Feb. 10, going through those same seven numbers over and over again. At this point, those shouts must be embedded into the brains of each player on the Heritage Academy-Maricopa boys basketball team. The numbers are the entire basis of the team’s play.

Under Deakyne, the Heroes have adopted an offensive system where a seven-second-or-less possession isn’t just the preferred outcome, but a mandatory one. Immediately after gaining control of the ball, it is immediately pushed far up the court. Then, players look for a 3-pointer where a defender has given them any space at all to shoot, or a pass into the paint to get a layup.

The results have taken the Canyon Athletic Association by storm. The Heroes are 14-3 and won their final nine games of the regular season. But beyond that is how they have been winning. The Heroes average 97.1 points per game and have reached triple digits six times, an unheard of set of numbers in high school basketball. In fact, that scoring average is the highest in the entire country, according to MaxPreps. The next highest is a school in Utah with 93.5.

Compare that to a school like Skyline, which is among the best teams in the Arizona Interscholastic Association’s top division, 6A. It has gone 16-1 against some of the best competition in the state, yet it has only averaged 70.7 points per game, and its highest score was 90, which it reached only once.

All this, by the way, has taken place during the Heroes’ first year of existence. Oh, and they only have one junior on the roster — the rest are freshmen and sophomores. And it’s just the first part of a larger plan.

Inspiration struck the 26-year-old Deakyne when he watched the 2010 documentary “Guru of Go” about coach Paul Westhead, the creator of what became known as “The System.” The movie celebrated Westhead’s run-and-gun philosophy which he used to win an NBA championship with the Los Angeles Lakers and to revolutionize college basketball at Loyola Marymount University.

“I was like, ‘Yeah, that’s the way to play basketball right there,’” Deakyne said. “It was just the way they played. So I started researching it, and I realized this was the way I wanted to play for the rest of my life.”

Around that time, Deakyne was a senior in high school and had been given the opportunity to run practices because his coach was often busy with his duties as an athletic director. He was able to get some of The System implemented there. Then came his first head coaching job at South Pointe, where he won the CAA state championship in 2015. There, he used most but not all of The System, and the team averaged about 80 points a game, still an accomplishment for high school.

He left to serve in the Marines, and when he came back he decided he wasn’t going to compromise anymore. He was going to run the full System, and see how far it can go. When he was approached by Heritage, which opened its Maricopa campus in 2019, he told them he believed he could win a state championship in his first year. Whether or not they believed him then, they do now.

“I wouldn’t have done it if I didn’t think it was going to work,” Deakyne said. “I expected to come in and be competitive and score 100 points per game. I expected to do that off the bat. I’m glad it worked out, but it’s not like I can’t believe it.”

Any coach who has used a run-and-gun style knows that its success depends largely on the players. The way the Heroes play, there simply isn’t any time for a coach to call a play or give instructions to his point guard. By the time Deakyne would get his first sentence out, the ball should have already been heading toward the rim.

That’s why it’s so important to get players to think hard during every second on the floor, looking to make the right decisions that will execute the gameplan. Practices are all about developing players’ IQ so they’re ready for anything that might get thrown at them, to make the correct reads. There is of course plenty of conditioning involved in practice, though Deakyne finds ways to make those drills competitive so he doesn’t lose the kids’ interest. Everything in practice is competitive.

The group of underclassmen has taken to the system with no reservations, and it has paid off. Deakyne’s younger brother Josh (24.6) is eighth in scoring average in all of Arizona, with Logan Porter (24.1) close behind at 11th.

“Back when nobody knew who we were, teams came in and thought they could walk right over us because we’re young and a smaller team,” Josh Deakyne said. “We definitely quieted them down.”

While the team’s speed and shooting prowess is getting all the attention, Deakyne said it’s actually defense that is key to the whole machine running smooth. The philosophy there is to get the ball back as quick as possible. This means pressuring the ball handlers with double teams every time and always looking for a turnover. This runs contrary to conventional basketball coaching, which tries to avoid allowing easy layups by remaining disciplined and in front of their man.

“At (previous school) Perry, we’d be scared to do something because it might be wrong,” Porter said. “But here, we have a lot of freedom, so if we think there’s something that’s right for the game, the coach trusts us. We can do what we want.”

Deakyne doesn’t care about the conventional wisdom though. He wants the other teams to try to run with them. The faster they go, the more it plays into Heritage’s hands. Their opponents always get tired when they do that. He noted one team that was particularly successful at slowing the game down — BASIS Scottsdale — to the point where he was worried the game would end in the 70s. The Heroes wound up winning the game with 97 points.

This type of daring play is possible because the math works out. The System relies on a formula that says a team needs to shoot 45 3-pointers, get 30% of the offensive rebound opportunities, 120 trips up and down the court and 25 more shots than the opponent. In a study he cited from the book The System inspired, teams that accomplished all those metrics won 98% of their games.

Unconditional faith in that math is necessary to making it work. If a player misses his first five shots, he can’t stop shooting or the math won’t work. If there are only two minutes left in the game and the team is up by five, every instinct is to let the clock wind down — but doing that would betray everything, so the team must keep running.

But for the players, once the conditioning sets in, it’s all great. There are twice the shots, meaning everyone gets plenty of chances. And they get to play the way they do in a video game, with constant action.

“It feels good breaking records,” Josh Deakyne said. “But I try not to let it get too much into me. Running The System, I kind of expect to be really high scoring. I know that other players, if they were able to come into our team under the same coach running the same system, I know they can break records too.”

Now that he’s shown The System can work, Deakyne has his eyes set on whatever horizon he can reach. That doesn’t just mean winning CAA titles. He wants to take the Heroes to the national circuit, playing the top prep schools in the nation. Basketball being basketball, he believes this team can win at any level, no matter the competition, and he wants to prove it.

“I’m gonna call everybody for next season. I’ll play anybody any time, any day, anywhere,” Deakyne said. “If big name players come over here, we’re going to play big-name schools. Obviously, I’m very competitive, and I want to win. But at the end of the day, I do this because I understood what it was like being a player who didn’t get a lot of promotion with a coach who wasn’t really ready to market you to college. I figured this was the best way to market kids to colleges and get them scholarships. For so many kids, this is why they play. They want that chance.”

The System got its first big challenge on Saturday when the Heroes faced cross-town rivals Sequoia Pathway Academy in the first round of the CAA playoffs. The offense was as reliable as ever, and Heritage defeated the Pumas 97-81 to advance to the semifinals against BASIS-Scottsdale at Bourgade Catholic High School this Saturday.