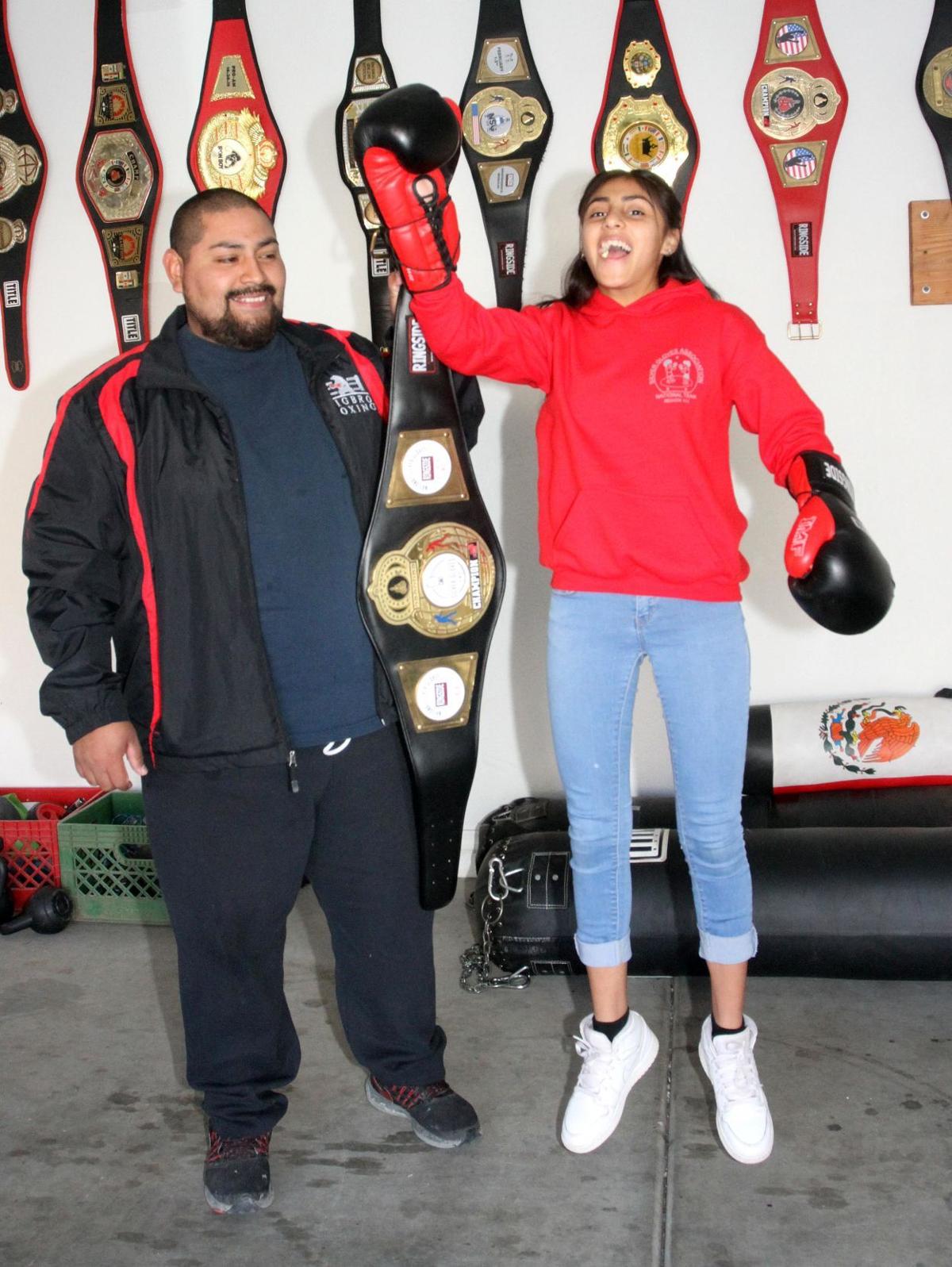 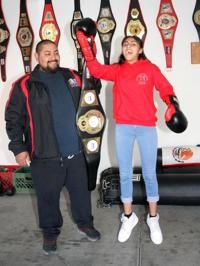 Alezet Valerio, with her father, Thomas, is proud of her most recent Silver Gloves national championship. 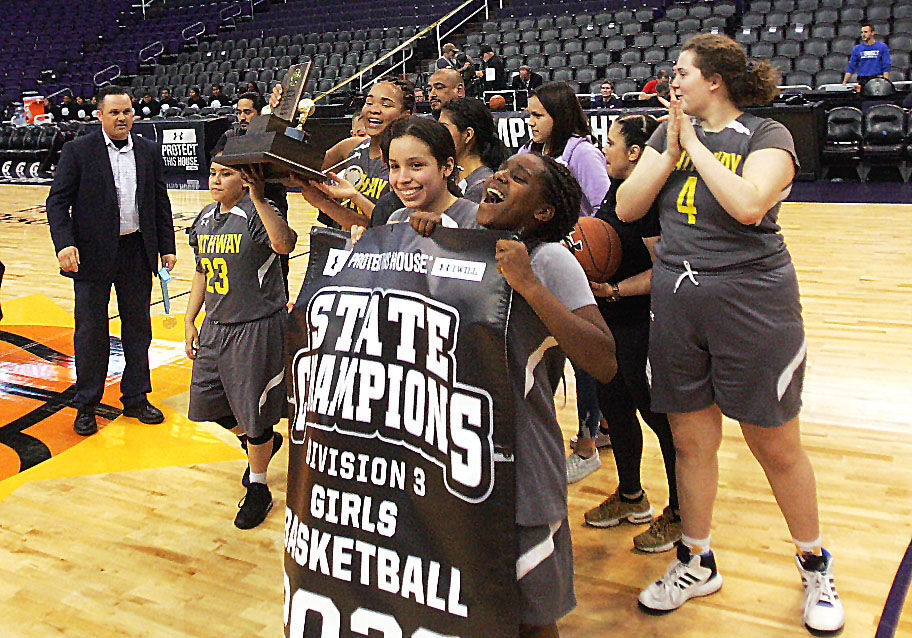 Members of the Sequoia Pathway girls basketball team celebrate their Division III state championship on Tuesday at Talking Stick Arena in Phoenix. The Pumas defeated EVAC 46-40 to win the championship. 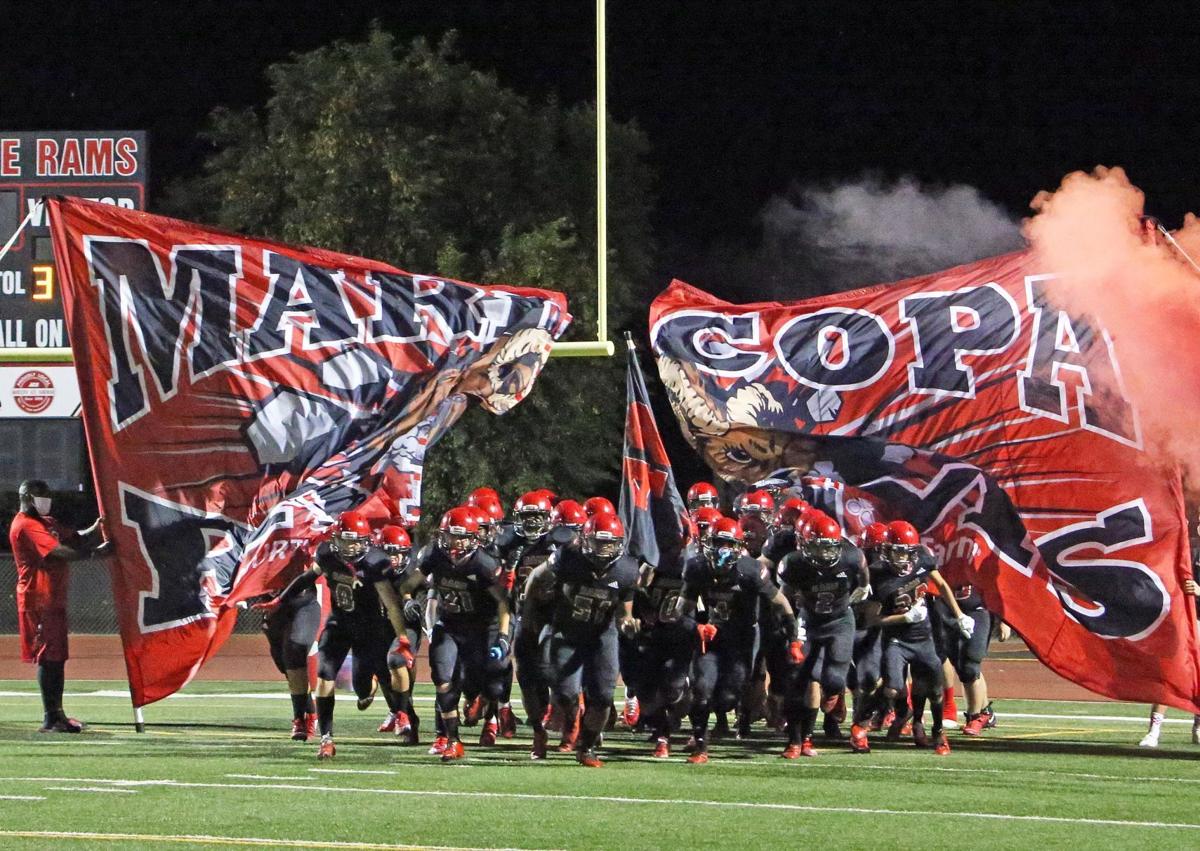 Alezet Valerio, with her father, Thomas, is proud of her most recent Silver Gloves national championship.

Members of the Sequoia Pathway girls basketball team celebrate their Division III state championship on Tuesday at Talking Stick Arena in Phoenix. The Pumas defeated EVAC 46-40 to win the championship.

Alezet Valerio, 14, sits on the couch in the living room of her Maricopa home sporting a red hoodie. She is across from her dad, Thomas Valerio Jr., and they’re deep into discussion over her latest boxing match.

She’s talking about the moment she won her latest and proudest achievement to date, her title of 2020 national Silver Gloves champion. Though this is the second time she’s won the championship title, last time in 2018, it only pushes further along the road to her ultimate goal — to be in the 2024 Olympics.

James Deakyne’s voice can be heard throughout the Ak-Chin Indian Community gym on Feb. 10, going through those same seven numbers over and over again. At this point, those shouts must be embedded into the brains of each player on the Heritage Academy-Maricopa boys basketball team. The numbers are the entire basis of the team’s play.

The results have taken the Canyon Athletic Association by storm. The Heroes are 14-3 and won their final nine games of the regular season. But beyond that is how they have been winning. The Heroes average 97.1 points per game and have reached triple digits six times, an unheard of set of numbers in high school basketball. In fact, that scoring average is the highest in the entire country, according to MaxPreps. The next highest is a school in Utah with 93.5.

This style of play took them all the way to the state championship game. In their second season, the Heroes will have a national team that will travel to play the top high school basketball programs in the country.

For eight years, the Sequoia Pathway Pumas have been a force to be reckoned with in girls basketball. In what was the end of an era, they went out as they have always aspired to be and so often become: champions.

For the second straight year, the Pumas hugged each other on the court at Talking Stick Resort Arena having won a Canyon Athletic Association state championship, this time in Division III. The win capped off an undefeated season, but it did not come easy. In fact, they needed plenty of heroics from many different places to defeat East Valley Athletes for Christ 46-43.

All alone on the free throw line, under the lights of the biggest basketball stage Arizona has to offer, Aleina Estrada ended her unparalleled basketball career at Sequoia Pathway in the only way that seemed fit, calmly sinking four straight free throws to clinch a second straight state championship for her Pumas.

As he promised after their victory over Marana in the play-in game, Maricopa coach Cortney Kellenaers left it up to his players how they were going to play.

Against Gilbert Campo Verde, the second best team in 5A, the Rams showed they could hold their own against the best, but the were simply too much and came away with the 3-1 victory in February to advance to the quarterfinals.

After the Rams reached halftime only down 1-0, a good showing for a team 15 spots below their opponent in the rankings, Kellenaers once again gave the players a decision: continue playing defensive like they did in the first half and keep things the way they were going, or get aggressive and put it all out on the table. He said 3/4 of the players chose to go for it.

That strategy paid off pretty quick, as 10 minutes into the second half Madison Tyler got a quality cross to Seneya Cowing, who headed it into the goal to tie the game.

A long journey finally met its culmination in 2020 as Sequoia Pathway Academy has been accepted into the Arizona Interscholastic Association.

The AIA is the main sanctioning body for high school sports in Arizona, consisting of the state’s district schools, as well as charter and private schools that desire to compete at the highest level and meet the organization’s standards. Sequoia Pathway currently competes in the charter-filled Canyon Athletic Association.

Beginning with this school year, the Pumas will compete in AIA’s 2A conference, which includes many of AIA’s smaller schools, while not limiting sports like football to number restrictions like they do in the 1A conference. Junior high sports will continue to compete in CAA.

The Pumas' football team showed they belonged in the AIA right away, winning its first three games of the season and making the state championship play-in game.

It was quite the journey for Nolan Ford to get to the podium at the state swimming championships on Oct. 30. And that’s not even mentioning how far he’s come from two years prior when he first started swimming competitively. He came far from just the previous week.

Ford, a junior, cut more than a second off his state qualifying time of 22.5 seconds to 21.4, quite the feat in the 50-yard freestyle where every tenth of a second matters so much. That was enough to move him from the 14th qualifying spot, all the way up to second for a silver medal. Boulder Creek’s Rick Popper finished first with a time of 21.15 seconds.

During the simmer, recreation officials with the City of Maricopa are usually in high gear putting on activities or planning for the summer.

This year, those activities weren’t happening so everyone could keep their distance during the COVID-19 pandemic. That means no sports leagues or swim lessons until it is deemed safe.

The Community Services department, however, still wanted to keep people, and especially kids, connected during these times. So they went virtual, conducting esports tournaments online for competitors ages 12 and older.

From the outside, it might look like the Maricopa Rams were at a disadvantage heading into the football season, but their coach didn’t see it that way.

Just as teams from around the state were getting ready to start practicing, somebody at MHS contracted COVID-19, causing the entire football team, along with the wrestling team, to quarantine for two weeks. They were able to resume workouts Sept. 3, just in time for official practice to begin.

Coach Brandon Harris, while acknowledging the situation as less than ideal, said the good news is the Rams are healthy, and they had made so much progress over the summer that the two-week hiatus shouldn’t put them behind their competition.

Starting a new job can be a stressful situation no matter the circumstance, but to do so when everything you’re supposed to do is up in the air and changing by the day adds a whole new level.

That’s what was facing Evelyn Wynn, the new athletic director at Maricopa High School. With fall sports scheduled to begin competition in a little over a month, there is still little clarity about what’s going to happen when it does, or if it will at all.

On Wynn’s side is nearly a decade of experience as an athletic director. Her AD career began in 2011 at Montoursville Area High School in central Pennsylvania, near where she grew up.

Wanting something different, she looked around the country for a place to continue her work, and landed in Arizona as the AD at Globe High School last summer. Not wanting to make the commute from the Valley any longer, she jumped at the chance to join Maricopa.

Not only had this team never competed as a unit before, but there were many who had never played football at all. Add in that there were only two seniors and two juniors on the team, and an inaugural season where wins came few and far between wouldn’t have been that hard to imagine.

And yet, there Heritage Academy-Maricopa was on Dec. 12 at Thunderbird High School in Phoenix, playing for a state championship trophy.