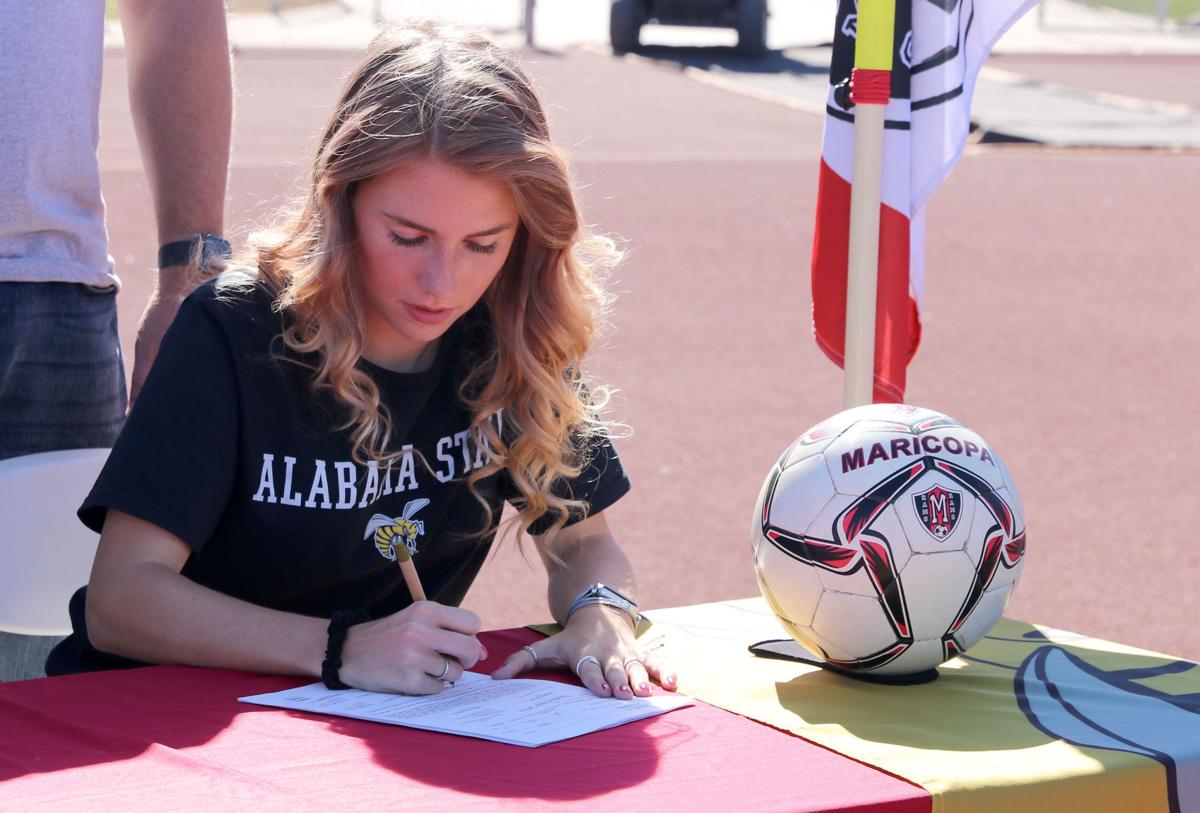 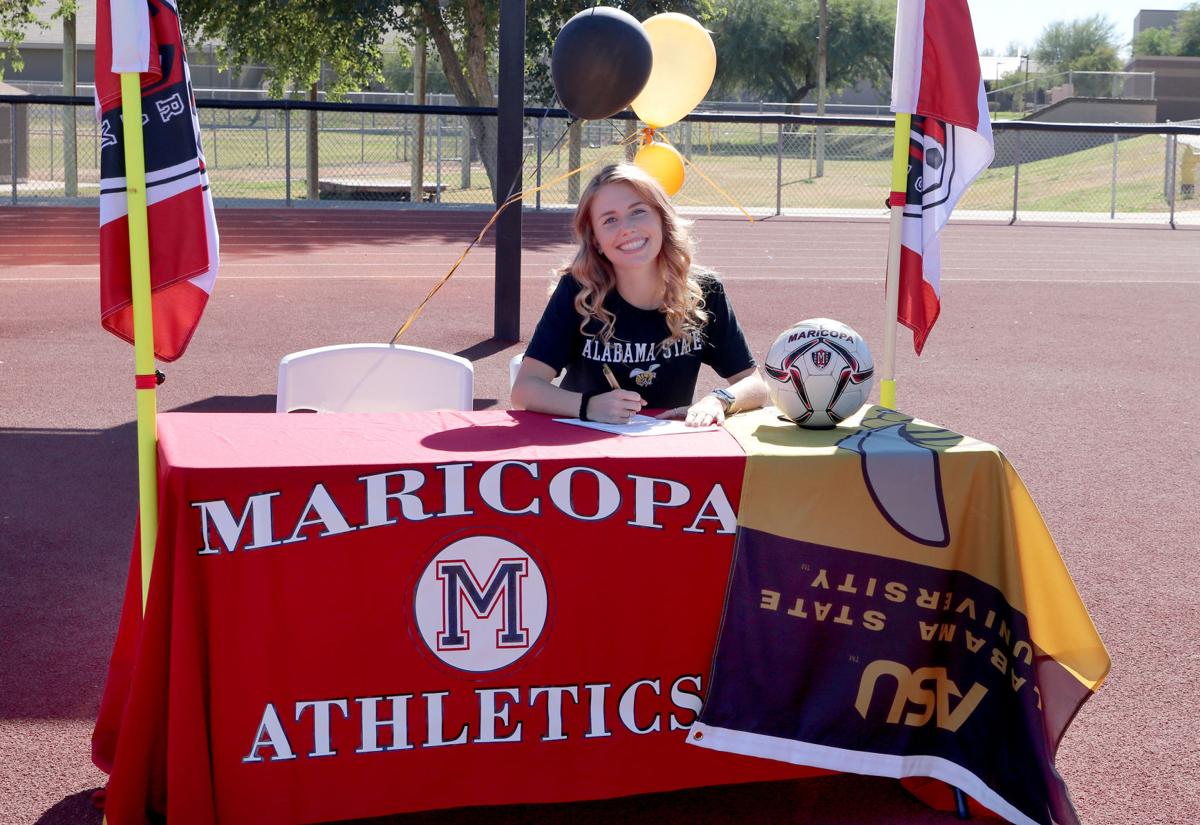 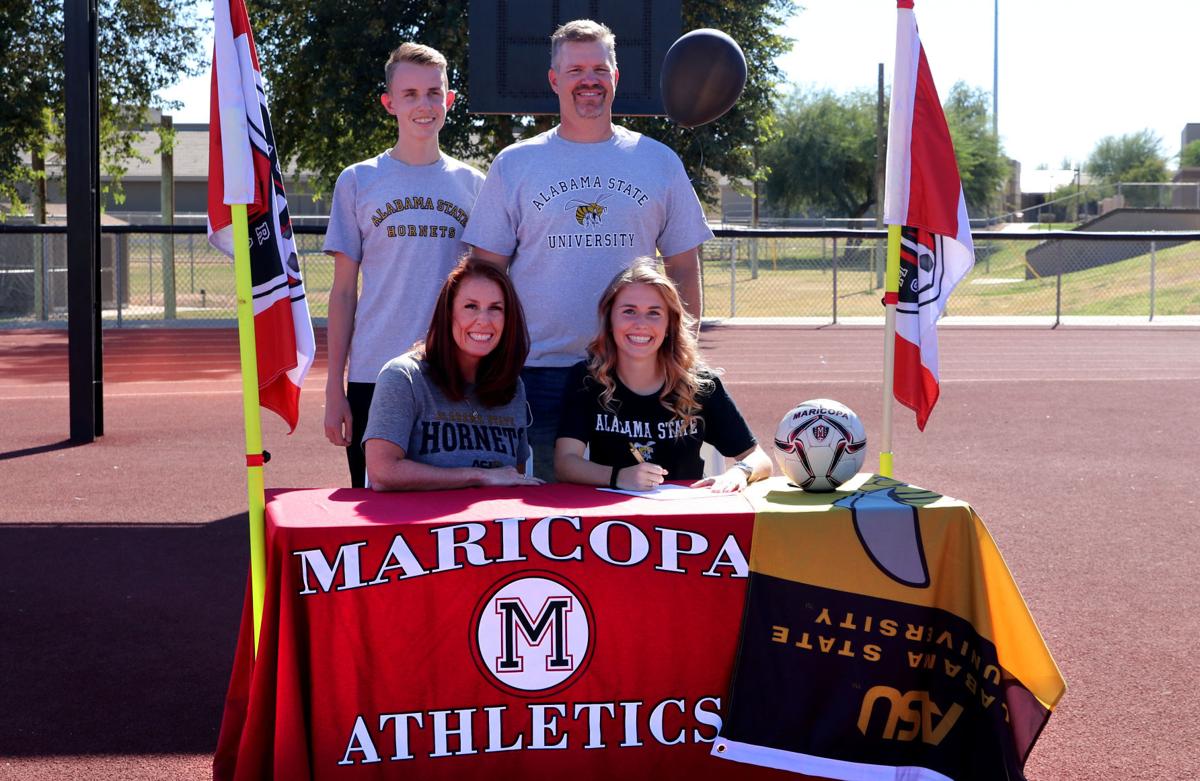 Maricopa's Madison Tyler is surrounded by her family as she signs her letter of intent to play soccer at Alabama State University.

Maricopa's Madison Tyler is surrounded by her family as she signs her letter of intent to play soccer at Alabama State University.

MARICOPA — It all sounds like a broken record when it comes to COVID-19 and the effect it’s had on high school sports.

Maricopa High’s Madison Tyler wasn’t going to let anything, not even a pandemic, get in the way of fulfilling her dream to play college soccer as she signed her letter of intent Nov. 16 to play for Alabama State University.

“I was just trying to get out of state, and they were one of the schools that I was really interested in,” Tyler said. “In Montgomery, where Alabama State is at, there’s a lot of history in the town, and I love history. Those are some of the reasons why I chose to go there.”

The NCAA is in a recruiting dead period which was first implemented in April. The dead period was extended through the end of the year, which means no in-person recruiting is allowed. However, phone calls, emails and texts are allowed.

“Throughout the whole process it was all about getting your footage to coaches and emailing them,” Tyler said. “Having a constant interest in them, always reaching out and updating them. I started reaching out to Alabama State over the summer, just sending them footage.”

Unlike high school spring sports, soccer managed to squeeze by, as the season has wrapped up a month before the spring season was canceled.

Despite playing a full high school season, Tyler was still affected by COVID-19 as her summer club season was delayed. Now there’s a possibility that her senior season will be delayed as well.

She told PinalCentral there were some restrictions when it came to the club team games, such as sitting as far apart as possible and wearing a mask when they weren’t on the field.

Tyler has been playing soccer since she was 4 years old and said it all started because her parents were trying to get her out of the house.

“They wanted me to get that energy out somewhere else instead of creating chaos inside the house,” she said. “I think at one point, when I started getting more serious I was like, yeah I definitely want to go into college and do this, and see where it will get me.”

Since she began playing at such a young age, Tyler has experienced the different levels there are in soccer from the club team scene to high school.

Having played on different club teams, she’s had many coaches and is thankful for each of them, as they all pushed her outside her comfort zone.

“They helped me try new things, even different positions, and you’re playing in all these different environments,” she said. “I love soccer, and I’ve met a lot of great friends through it.”

Tyler added she loves the family aspect that comes with the sport. There is also a type of mentorship program within Maricopa soccer where the seniors help out the incoming freshmen and bond over pasta.

“Some of these girls are my best friends, I’ve known them since I was 4,” she said. “We grew up together. You have something you can always bond over. You can always go out and be like, ‘Hey, let’s go play soccer this weekend.’ And you know those people can relate to you.”

Rams coach Cortney Kellenaers said during the signing ceremony that Tyler put in the work on the pitch and in the classroom, which led to the opportunity of signing with a Division I school.

He said she is the first player in the soccer program to sign with a D-I school in the past 14 years.

“I’m definitely scared because it’s a big change going from Arizona to Alabama, but honestly I’m really excited because I’m going to be a little more independent I think,” Tyler said. “I didn’t want to be in Arizona because I was afraid that if something happened I would go back home; I just want to be able to live on my own and get some independence.”