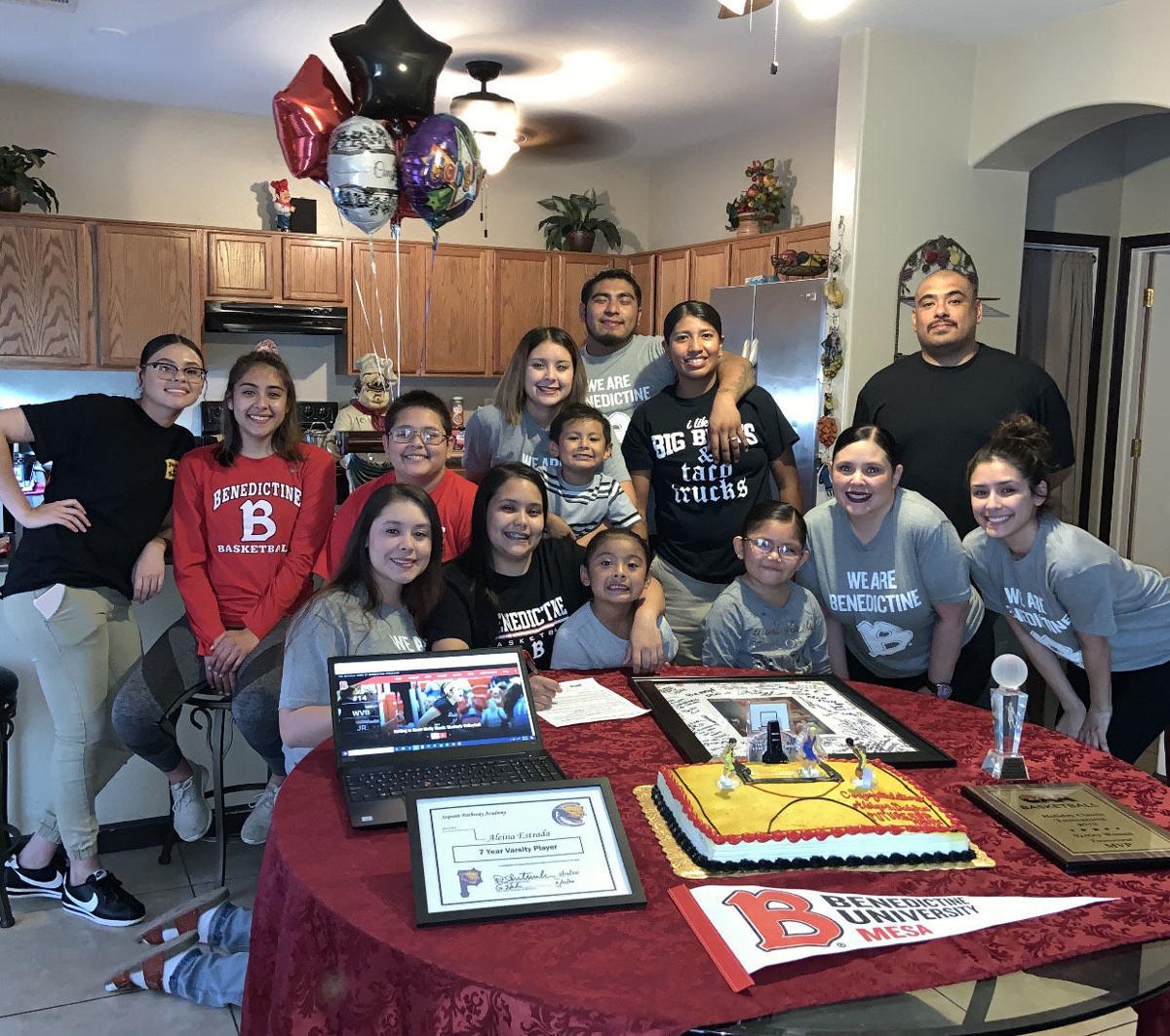 Aleina Estrada, front row second from left, celebrates signing with Benedictine University along with her big family during a livestream signing event. The photo was taken before social distancing measures were implemented. 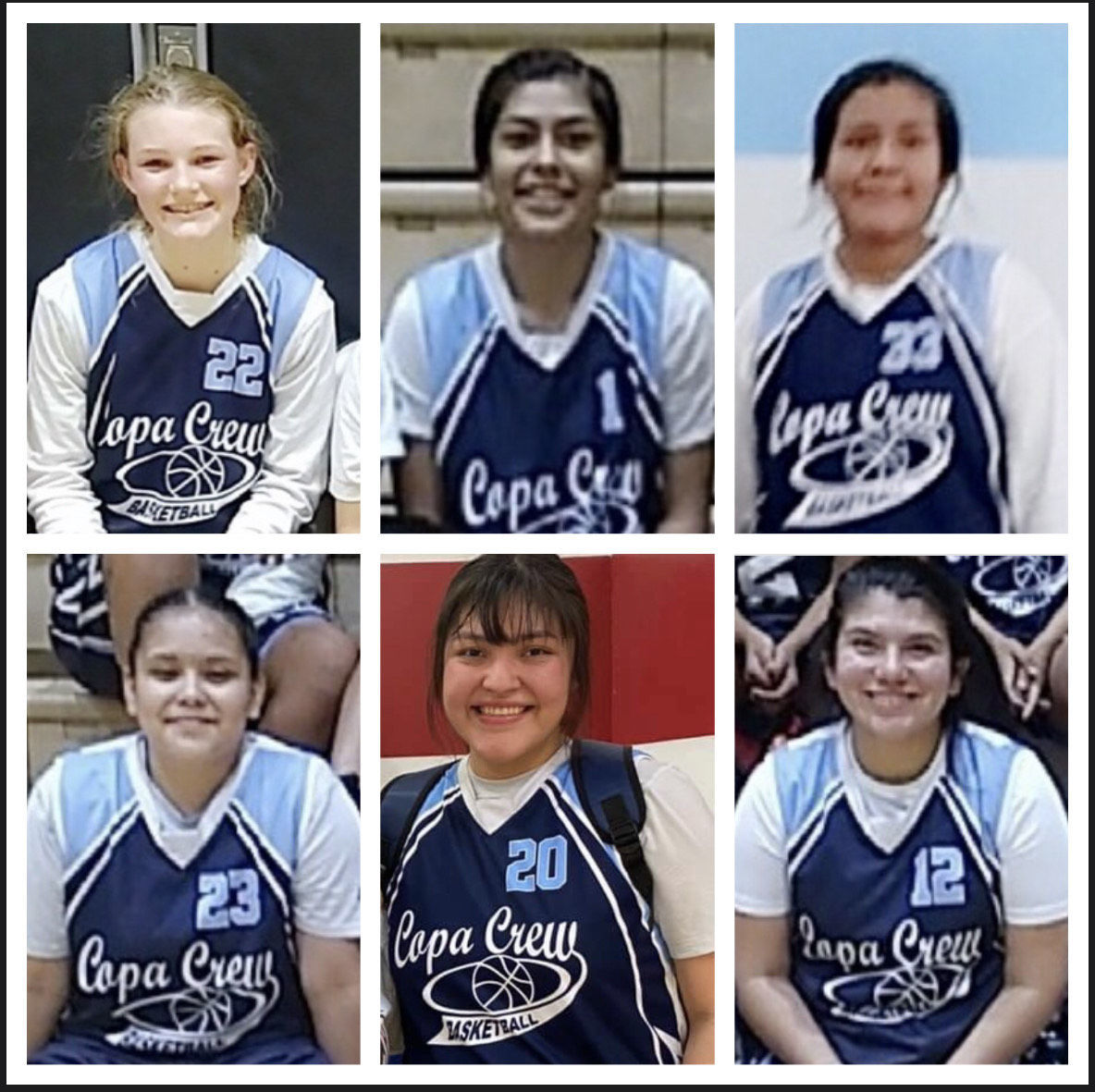 Aleina Estrada, front row second from left, celebrates signing with Benedictine University along with her big family during a livestream signing event. The photo was taken before social distancing measures were implemented.

MARICOPA — For high school basketball players, signing to play for a college team is an exciting life milestone. And while the girls of the Copa Crew club team weren’t able to have the signing ceremony they might have imagined just a month ago, they were at least able to have that moment together.

The team held a virtual signing ceremony on Saturday, live-streamed on the Copa Crew Facebook page. There, viewers got to see six players commit to play at the college level. What’s more, they got the rare opportunity to see five players from the same team sign with the same school.

Aleina Estrada, Daycee Achin, Cheridan Gooday and Sequoia Lucero all chose Benedictine University in Mesa as their college program. Destiny Rosales, Estrada’s teammate on the back-to-back champion Sequoia Pathway, also had committed to Benedictine, but later decided to join the military instead.

“We try to fill our basketball program with good people and good basketball players, in that order,” said Benedictine head coach Brian Hutchins. “I was able to watch them play and see them display a lot of the qualities we were looking for — hard workers, good students in the classroom, self-motivated. It wound up being a really good fit.”

Hutchins got to know Copa Crew and Pathway coach Dee Estrada during his time at the high school and club levels, and he said that kind of relationship is key for a school his size when it comes to recruiting. A lot of the smaller schools and clubs that tend to send kids to Benedictine might not have as much game film or other exposure as their bigger counterparts, so it helps to know what kind of coach the players have grown under.

With Coach Estrada, the results have spoken for themselves, with both high school and club championships on her resume. She is also equally proud of a player on Copa Crew like Savannah Hooper, who will be attending Arizona State University on an academic scholarship.

“Knowing the coach helps a lot,” Hutchins said. “I’ve talked to Coach Dee several times and she really wants to do the best thing for her players. She holds them accountable while being supportive, which is a challenge in walking that fine line.”

The reason Benedictine is able to take on so many freshmen is that they have a reserve team to go with their first team, meaning all the players they sign should be able to get the playing time they deserve through the work they put in. Many other school in the NAIA conference, such as Ottawa, have a reserve team, which allows them to play a solid schedule.

That so many teammates will be going to Mesa together was a big recruiting pitch in itself. That’s particularly true for Aleina Estrada, who had expressed some reservations about going to college due to health issues like seizures that require quick action from those around her. She told PinalCentral that having these teammates who know her well around her all the time provides a lot of comfort.

“I really feel as if this is why Aleina took the offer and decided to sign,” said Dee Estrada, Aleina’s mother as well as coach, “because she will have her teammates with her.”

On the court, Hutchins believes there will be a lot of benefit to having so many players who are already familiar with each other and how they play.

Last year, the Redhawks went 19-9, and 7-7 in conference, which put them in fourth in the standings. While he wants to make sure the incoming athletes know they are students first, he expects this new, united group of recruits to come in and build on that.

“That chemistry is a huge part of what makes our teams successful,” he said. “The better the chemistry, the better they’ll be on and off the court. It’s going to be pretty unique for us to have, with this many players from the same club. We’re excited to have them for the next four years, and to build on that camaraderie.”