Maricopa coach Brandon Harris, left, gestures from the sideline during a game against Gilbert on Nov. 6 in Gilbert. Due to an alarming spike in COVID-19 cases in the state, Harris has suspended Maricopa’s team workouts indefinitely. 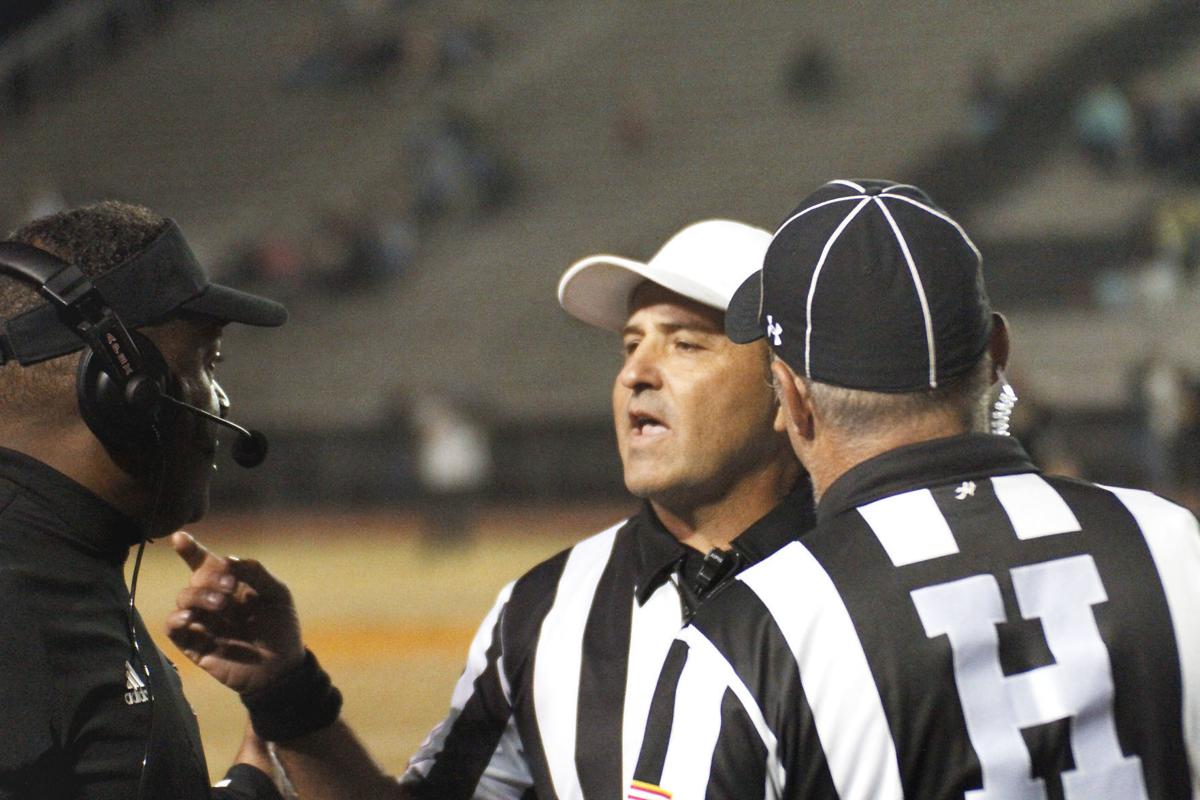 Maricopa coach Brandon Harris discusses a call with officials during the fourth quarter of the Rams’ 35-14 loss to Gilbert on Nov. 6 in Gilbert.

Maricopa coach Brandon Harris, left, gestures from the sideline during a game against Gilbert on Nov. 6 in Gilbert. Due to an alarming spike in COVID-19 cases in the state, Harris has suspended Maricopa’s team workouts indefinitely.

Maricopa coach Brandon Harris discusses a call with officials during the fourth quarter of the Rams’ 35-14 loss to Gilbert on Nov. 6 in Gilbert.

MARICOPA — Facing an alarming surge of COVID-19 cases in Arizona, Maricopa football coach Brandon Harris took it upon himself to postpone summer workouts.

The move was echoed by the Maricopa Unified School District the next morning to suspend workouts and close the campus until July 13.

“I wrote a letter to the program stating that I was going to shut us down because I felt it was harder for me to quantify why are we out here with the (COVID) spike,” Harris said. “You have colleges and universities shutting down practices, how can I continue to have these kids out here.”

Harris’ decision Monday was just one of many similar decisions made by state leaders and the Arizona Interscholastic Association that will delay the start of the football season, originally scheduled to begin Aug. 21.

On Monday, Gov. Doug Ducey announced schools would not open until at least Aug. 17. Hours after the governor’s announcement, the AIA issued a press release stating that all official practices were also suspended until Aug. 17.

Steve Bebee, superintendent of the Casa Grande Unified High School District, said at a board meeting Wednesday that CG Union football coach Jake Barro had canceled his team’s workouts for at least one week.

“We couldn’t be more disappointed about the information that just came out regarding our schools,” AIA executive director David Hines said in a statement. “However, we understand that the most pressing concern is to ensure our student-athletes can return to school in the safest way possible. We will do everything in our power to make sure that when we get back up and going again, the transition will be seamless as possible and to create memorable interscholastic experiences. And we’ll be able to accomplish that as long as everyone does their part to stay safe and prevent the spread of the virus.”

The decision by the AIA means official practices that typically start around July 31, cannot take place until Aug. 17. However, teams can still conduct summer workouts based upon each school districts’ guidelines.

A majority of schools in Pinal County, including Maricopa, resumed summer workouts about June 1, while others waited until June 22.

The decision by the AIA also pauses its plans to send out surveys to school principals to gauge their reopening plans. Instead, the AIA will send those surveys at a later date to closely coincide with the state’s target reopening date.

“I think if we stabilize it as a community and have the ability to contact trace or test people and immediately get a handle on outbreaks in these communities,” Harris said. “I think only then can you really go ahead.”

Harris added high schools are not the NBA or the NFL; they don’t have coronavirus tests for every kid in the program.

He wouldn’t mind making football a winter sport for just this year.

It’s a move that has also has support from CG Union athletic director Randy Robbins and Barro, who have expressed support pushing the season back two weeks into September.

Harris said a timetable can’t be set, as the numbers and the situation of the virus change from day-to-day. He added that the scariest prospect of all is not having a football season and the lost opportunities for players to get college scholarships.

“That right there is scary. It’s not just scary for football. It’s scary for everyone,” he said. “We can’t just say we’re going to wish it away or play it away. You have to know what you are dealing with and what that is going to look like. I would rather play when we can play as a opposed to let’s just roll the dice and see what happens.”