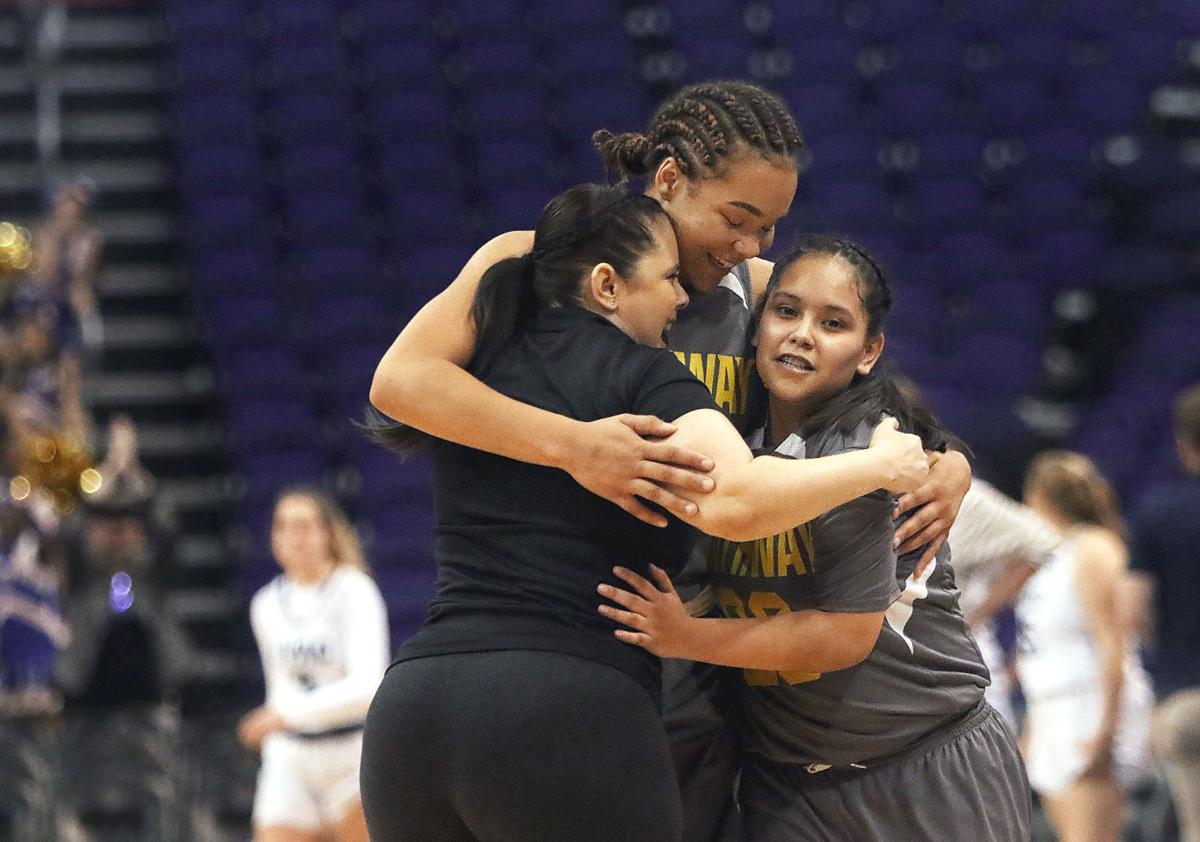 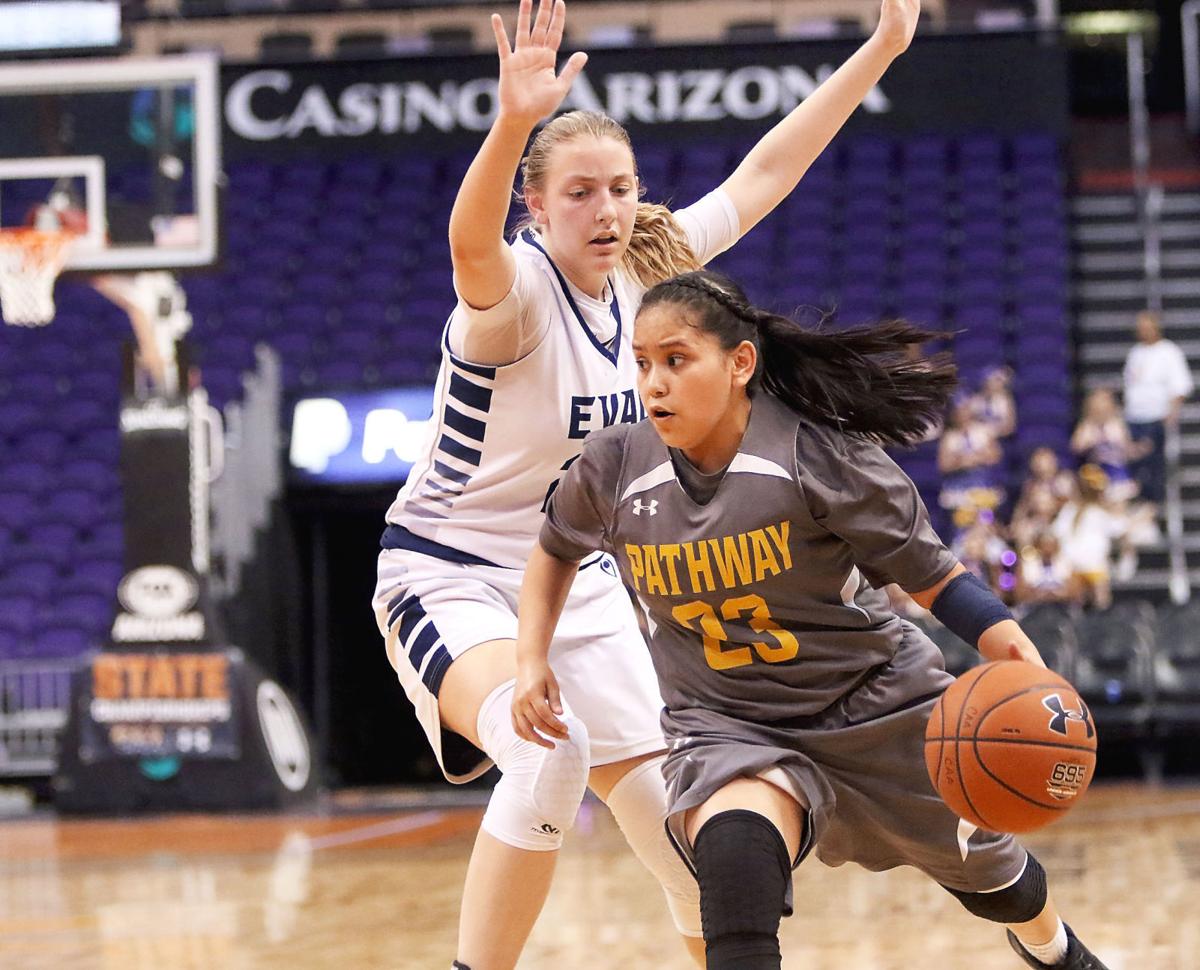 Aleina Estrada drives to the hoop past an EVAC defender during the 2020 Canyon Athletic Association state championship game Feb. 25 at Talking Stick Resort Arena in Phoenix. 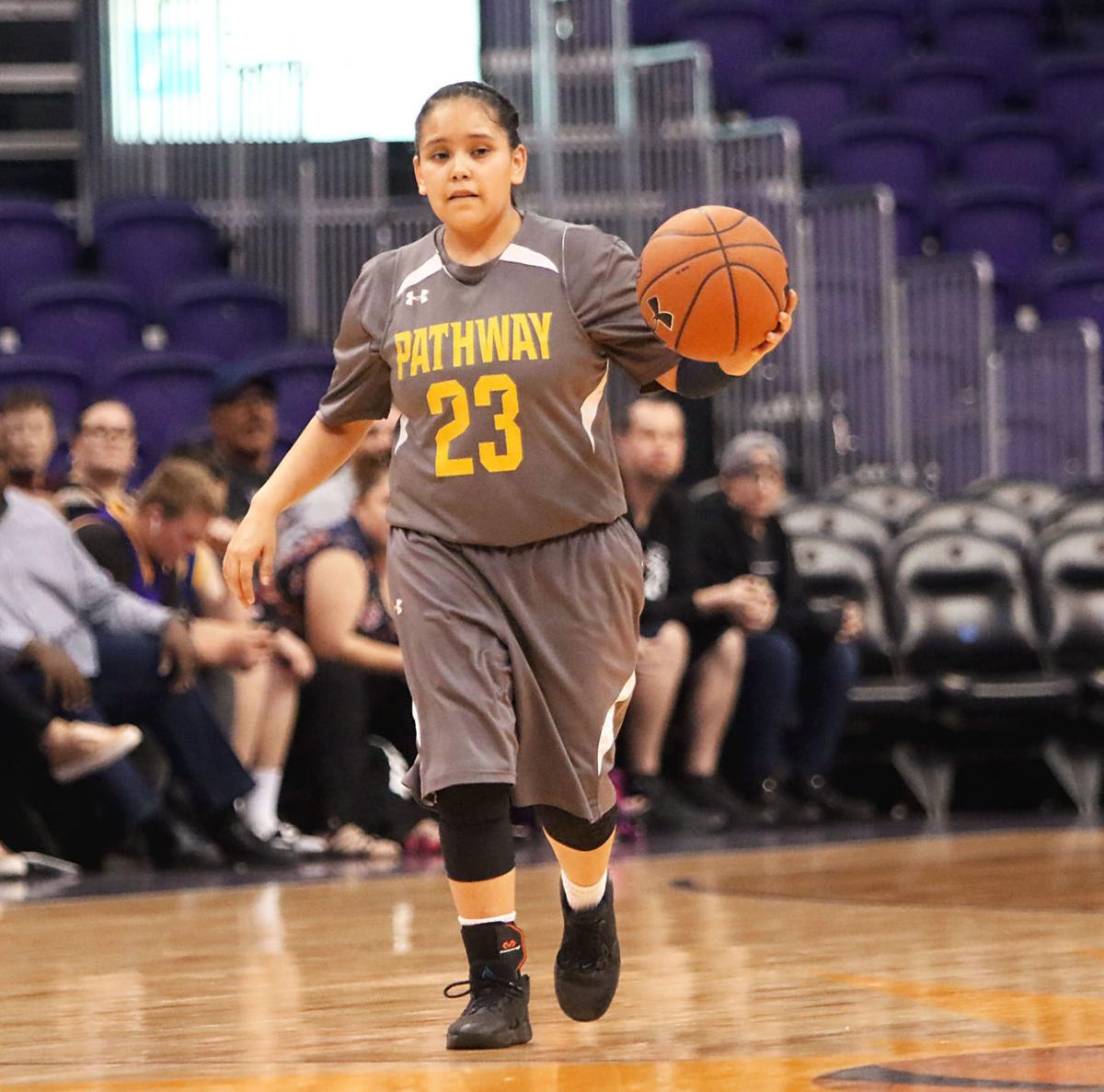 Aleina Estrada dribbles the ball down the court during the 2020 Canyon Athletic Association championship game Feb. 25 at Talking Stick Resort Arena in Phoenix.

Aleina Estrada drives to the hoop past an EVAC defender during the 2020 Canyon Athletic Association state championship game Feb. 25 at Talking Stick Resort Arena in Phoenix.

Aleina Estrada dribbles the ball down the court during the 2020 Canyon Athletic Association championship game Feb. 25 at Talking Stick Resort Arena in Phoenix.

MARICOPA -- All alone on the free throw line, under the lights of the biggest basketball stage Arizona has to offer, Aleina Estrada ended her unparalleled basketball career at Sequoia Pathway in the only way that seemed fit, calmly sinking four straight free throws to clinch a second straight state championship for her Pumas.

It wasn’t an easy game by any means. But then again, nothing for the senior has ever been easy.

It wasn’t easy growing up in the shadow of seven siblings, including four sisters who became highly successful basketball players.

It wasn’t easy putting on the varsity jersey for the first time as a fifth grader, playing against girls almost twice her age.

And it definitely wasn’t easy stepping onto the court after being diagnosed with a brain tumor, never knowing when the next seizure was going to strike.

“Through everything that she’s been through, I would have thought that she would have already given up and quit by now,” said Dee Estrada, her coach and mother. “But it actually made her stronger.”

Aleina’s basketball journey started not on a court, but at home. In addition to Aleina’s biological siblings, the Estradas also foster, so there are always plenty of kids running around the house. The girls — Aleina and her sisters Alexis, Alyssa, Jesse and Brianna — would play different sports, but would always return to basketball.

Aleina, the youngest of the group, started dribbling a ball at age 3 under the direction of dad, Jesus. While her sisters might disagree, she claims she quickly established herself as the best ball handler in the family. Eventually, she would become the best shooter as well. All this was in a family where multiple girls went on to play college basketball.

Aleina laughs while Dee cringes recalling life in the house when all the sisters were growing up. There was usually a ball being passed around, with hoops hanging over multiple doors around the house. Things would break so regularly that the girls instinctively knew their roles in trying to put things back together before their mom noticed. Dee wouldn’t know until she tried to move a plate or cup and it would fall apart.

“It’s crazy in our house,” Aleina said. “Someone is always dribbling a basketball. Someone is always trying to shoot over someone, messing around. In our old house, (mom) had a set of six cups, and we would knock them down one by one until there was only one left and she had to move it before it would break.”

In the Canyon Athletic Association, the charter-filled league Pathway competes in (the school is moving to the Arizona Interscholastic Association next school year), teams can use players who are younger than the high school level on varsity teams. However, Pathway had a rule that players must at least be in the sixth grade.

Dee managed to convince then-Athletic Director Nate Wong to just give Aleina a chance to practice with the varsity team one day. He allowed it, and it became apparent very quickly that Aleina was the best ball handler at that practice. She was in.

When she did play varsity, Aleina joined her other four sisters to form a one-family starting five. This came much to the confusion of opposing fans, who thought the announcers were confused when crediting “Estrada” with every basket.

While CAA is very lenient when it comes to age, they do have one condition. Underage players are only allowed to compete in four high school games before they must make a choice to play there full-time or join the middle school team. Dee, acting as both a coach and a mom, decided Aleina should stay with her own age group until eighth grade.

Seventh grade brought her first state championship, and her first legendary moment. With 10 seconds left and the Pumas up by two in the middle school final, Aleina was facing heavy pressure from the defense. She tripped but maintained her dribble. The defenders tried desperately to take the ball from her, but she wouldn’t let them and dribbled away the final seconds all from her knees.

“I’m not just saying this because she’s my child — I’ve been coaching a long time, and I’ve never had an athlete that has a higher IQ,” Dee said. “She really has a high IQ for basketball, something you really can’t coach. She has a ton of heart and is very self-disciplined.”

It was a triumphant time on the court for the whole family, as her sisters also won state at the high school level that year. But behind the scenes, problems were starting to rise.

Aleina had been suffering from seizures, including a couple times while playing. Doctors conducted a routine MRI her freshman year, and that was when things took the turn for the worst. Dee remembers being on the road when they called her and told her to come back home so they could talk, and she knew immediately something was very wrong.

The next morning, doctors told Dee and Jesus they had found a tumor on the bottom of Aleina’s brain. Because of where it was, they couldn’t operate to remove it without causing some brain damage, so they recommended simply monitoring it with regular appointments.

That first year, Dee stopped working so she could focus on Aleina and the rest of her family, but her daughter didn’t let the diagnosis stop her from playing. In fact, basketball — and the girls she got to play it with — became her comfort in a time of crisis. No matter what, she had her sisters and she had her teammates.

“I kind of felt like I had to play,” Aleina said. “When I was off for a little bit, I missed it a lot. I didn’t want to be at home. They tried to keep me home, but I would show up to the practices.”

On the way back to Maricopa from a game, Aleina had a seizure in the van. By that point, her teammates had been with her for as many as eight years, so they immediately rose to the occasion. Dee was driving the van when one of the teammates shouted that Aleina had a seizure but they had it under control. One girl was already talking to 911, another was figuring out where they were on the freeway, and another had Aleina barricaded on the seat without constraints. That’s when the Estrada family grew to include those who took care of her.

Of course, it did have an impact on her game. Dee noticed she was moving a little slower than normal, and mentally she was dealing with the anxiety of never knowing when that next seizure was going to come. She managed to play through those fears, but the doubts lingered.

This past year or so, though, scans started showing something amazing: the tumor had started shrinking. Now, doctors hope that within the next couple visits they will show that the tumor is gone. Maybe it’s just a coincidence, but with that news has come a run on the basketball court for the ages.

Pathway won the past two CAA state championships, both against East Valley Athletes for Christ.

The first came in 2019, when as luck would have it Aleina broke her ankle in the playoffs and still played in the championship game to lead her team to its second title. Dee knew she would face criticism for letting her daughter play injured. But she said when you have someone who’s been through something as traumatic as a brain tumor, where they don’t know what’s going to happen from one day to the next, you don’t ever put limits on what they can do.

With a healthy ankle, but an arm she hurt during a fall just before leaving for the championship game, Aleina recovered from a rocky start to come back many times during the 2020 championship, including down by four points in the final minutes. Her free throws all went in, and they won.

In both games, Estrada was the calm hand in control of the offense, able to control the game through confident ball-handling and timely shooting. Those are skills that are sure to translate to the college level. However, someone can’t go through everything Aleina has gone through without raising some issues. There has been a reluctance to move away from the support system that has gotten her through all the hard times, even if it’s just a short drive away to an Arizona college.

Dee has been trying to calm those fears, knowing that opportunities are there to be taken, not shied away from. She thinks her daughter is arriving at that same place, and they hope to have a decision soon of where she’s going to play next year.

Whatever happens next year, Aleina and the Estrada sisters are sure to be remembered for their three state championships and countless contributions to the girls basketball program. Aleina isn’t one for a lot of words; she tends to let her game speak for herself. But her mom knows how much she’s mean to everyone around her, and how much her teammates have meant to her.

“I want them to remember that she stayed,” Dee said. “When everybody else left and Pathway — it’s no secret we’ve had some hardships here. She flat-out said I don’t care. I want to finish my senior year off strong, and what they’re doing at the school isn’t affecting me. She didn’t want to leave her teammates alone.

“It’s always been about representing her family, her community and he school. And I think she’s done all that.”