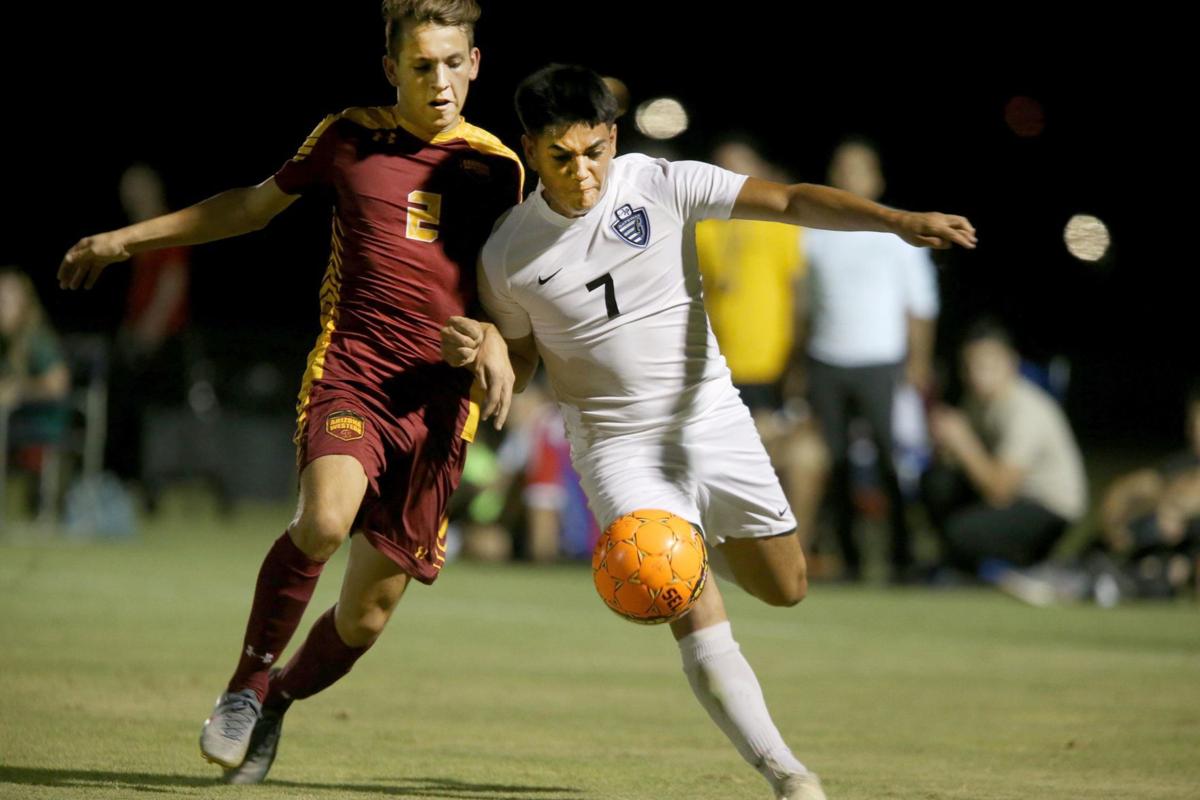 GateWay’s Ivan Mendez, right, a Maricopa High School graduate, battles for the ball during a match Saturday at Copper Sky in Maricopa. 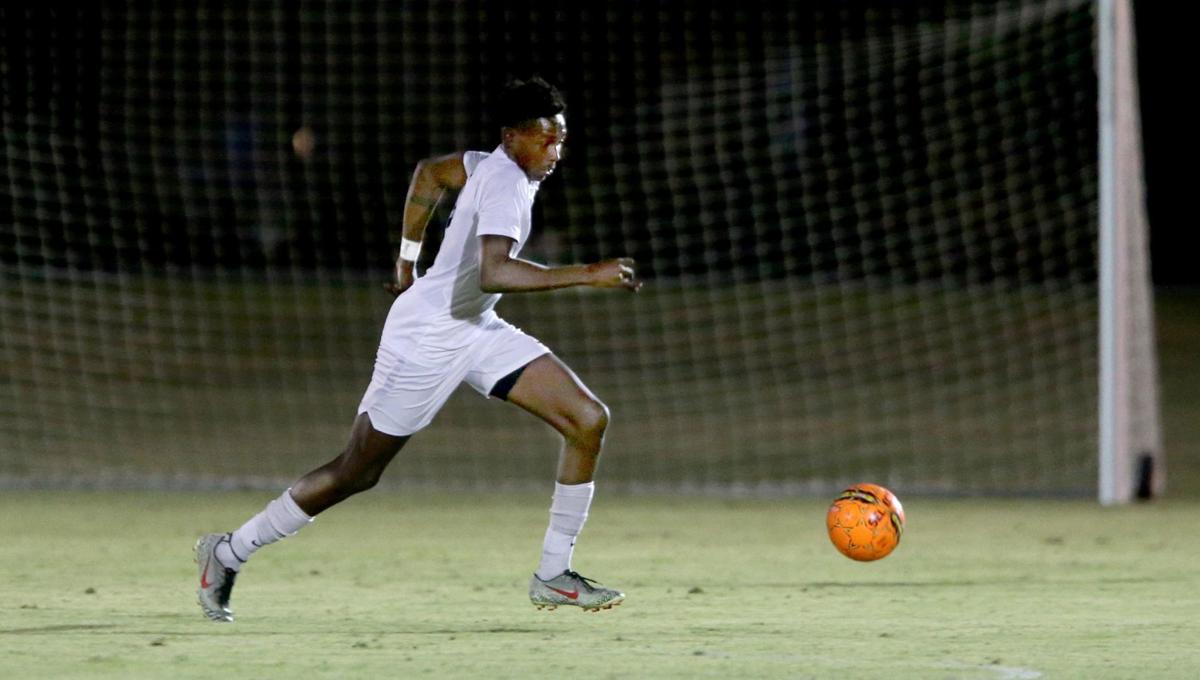 GateWay's Rueben Phiri move the ball up field during a match Saturday at Copper Sky in Maricopa.

GateWay’s Ivan Mendez, right, a Maricopa High School graduate, battles for the ball during a match Saturday at Copper Sky in Maricopa.

GateWay's Rueben Phiri move the ball up field during a match Saturday at Copper Sky in Maricopa.

MARICOPA — When two community colleges took the field at Copper Sky Regional Park, it showcased not only a level of competition rarely seen in the area, but also living symbols of the progress the sport has made in Maricopa in recent years.

The men’s and women’s teams for GateWay Community College and Arizona Western College played a regular season game at the park Saturday, which might seem peculiar with one school being from Phoenix and the other in Yuma. But a close look at one of the rosters shows why it made all the sense in the world.

The GateWay men’s team contains eight players from Maricopa, including five who played for Maricopa High School. The other three lived in Maricopa while attending Phoenix Mountain Pointe. That’s as much representation Greg Johnson has seen from a non-Phoenix city since taking over as head of the soccer program during its infancy.

Last month, the school held a soccer clinic at Copper Sky, and Johnson was impressed enough with the quality of the facility that he decided to play one of the school’s home games there.

GateWay has become a home for many former male Rams players, thanks in part to the man in charge of the team. Cortney Kellenaers is not only the associate head coach for the men’s team, but also the head boys soccer coach for MHS. As somebody invested in seeing the quality of soccer grow in the city, he was thrilled to have a game at Copper Sky.

“The quality of field in Maricopa is really high,” he said. “It’s great to have Maricopa’s kids out there to see these colleges play.”

While Kellenaers has played a part in bringing all these kids to GateWay, the pipeline existed for years before he came on, with Johnson crediting basic diligence in getting them there.

“The reason we’ve had so many Maricopa kids over the years is because we’re one of the few teams that have come out there to scout the players,” Johnson said. “For them to get an opportunity to go to college and play soccer, this is a pretty close option.”

While the Gecko men lost to Arizona Western 7-3 on Saturday, it wasn’t without its highlights for those who watched the game for the local talent. Former Ram Ivan Mendez scored a goal in front of the home crowd.

Moments like that are what Kellenaers wanted to bring to the people of Maricopa, especially the youth. With him taking charge on the sideline, and so many guys from Maricopa playing hard on the field at a higher level, Kellenaers is hoping the community — and a lot of kids who might not feel playing college soccer is attainable — will see what is possible with enough work.

“I think kids might think you have to be a superstar to play college soccer,” he said. “So to have them come out and see the level of play with the community colleges could really change the way they think.”

The other former Rams players on the team are Brian Garcia, Pedro Olivares, Jaime Hernandez and Nicholas Perez. Joseph Arciniegas, Reuben Phiri and Carlos Quintero-Mendez are from Maricopa but attended Mountain Pointe.

Having that many players with a deep history of playing together, even if just at a recreational level, is a benefit for the Geckos, especially in a sport like soccer that is so heavily dependent on teammates knowing exactly where the other person is supposed to be at all times.

“They know each other really well because they play with each other out in the field,” Kellenaers said. “They start talking to each other about going to the school.”

He said the challenge of that is trying to cut off any cliques that might be formed by the Maricopa guys, making sure they are fully integrated with the rest of the roster.

But getting more kids into college to play the game is a positive sign of where the city is heading in youth soccer, Kellenaers said. And those efforts go far deeper than what is happening with high school seniors. As with youth development in other sports, it starts much younger, and there are significant changes being made to the sport’s infrastructure in the city.

Kellenaers praised the city for agreeing to changes to its rec program recommended by coaches, despite opposition from some in the community. The biggest adjustment is embracing “small-side” soccer, which reduces the number of kids on each team in a game. It starts with 3-on-3 with kindergarten-aged kids, then moves up gradually to 4-on-4 then 5-on-5 and so on until they’re playing 9-on-9 in high school.

This is controversial, because the teams never get as big as competitive leagues, which have 11 players on each side. This leads to accusations of “small-side” not being real soccer.

However, Kellenaers argues that when kids play 11-on-11, they don’t grow the way they need to because they don’t have to move as much and each player spends little time with the ball. Shrink the team sizes, and it creates more room for the players to navigate and allows each player to touch the ball significantly more. This will then foster more creativity and skills.

These changes have just been implemented, and Kellenaers predicts it will be a few years before the results begin to show. But if all goes according to plan, the type of player Maricopa produces will be much different and will have even bigger opportunities available to them, as the best will move from the rec league to a club and then to wherever their talent takes them.

“We’re making some big changes with soccer in this city,” he said. “It’s upset some people, but long-term it’s going to be phenomenal.”

Kellenaers taking helm of both soccer teams at Maricopa High

MARICOPA — Coaching just one high school sports team can often feel like a thankless task. Add another one on at the same time, and you might …