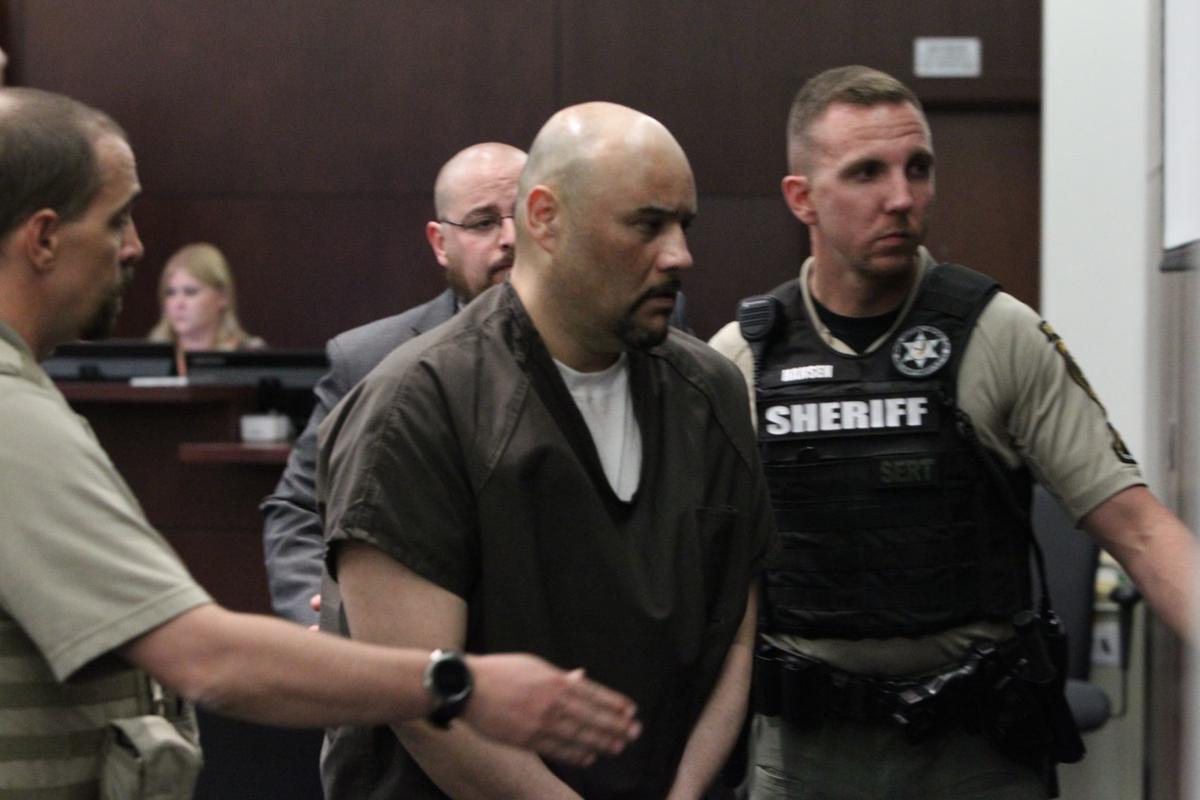 Jose Valenzuela is escorted out of a Pinal County Superior Court room Aug. 19 after being sentenced to life plus 25 years in prison.

FLORENCE — A man who pleaded guilty to killing two people in Maricopa has received the maximum sentence.

Jose Valenzuela, 42, was sentenced to life in prison for the first-degree murder of Tina Careccia, and an additional 25 years for the second-degree murder of Michael Careccia by Judge Christopher O’Neil on Monday.

This was the maximum sentence allowed for the crimes committed. Prosecutors had previously filed notice to seek the death penalty in the case, but the plea deal removed that option.

Valenzuela was indicted on two counts of first-degree murder in the killing of the Careccias, of Maricopa, in June 2015. He was accused of shooting the couple with a .22 Magnum handgun following a dispute at his home.

The couple was found buried on Valenzuela’s property after 11 days.

Addressing the court Monday, Valenzuela expressed a measure of remorse while also saying he wasn’t the only one to blame.

“I cared very much for Mike, and Tina as well,” he said. “Things happened so quick that night, one bad decision after another — made by all of us. I was not alone in this, nor was I looking for trouble; it followed me to my doorstep that night. I will never forgive myself for (having) been a part of my friends’ demise.”

Valenzuela added “guns, drugs and alcohol” fueled what he called a “horrible tragedy.”

“I am truly sorry to all the families, including my own,” he said.

O’Neil began his remarks by hitting at the desperation and heartache felt by numerous people throughout the Maricopa community — and far beyond — during the 11 days the Careccias were missing, which triggered an intense manhunt for the couple.

“For the four years, one month and 29 days since that Father’s Day on Sunday, June 21, 2015, their hearts have cried out for justice,” the judge said. “Human life is a sacred and priceless gift. It possesses a value beyond measure.”

O’Neil described the act of taking a human life without just cause as an “unspeakable evil.” He said that while the court cannot grant closure to the grieving family members, or heal their pain, it can administer justice.

In weighing all the aggravating factors of the sentencing, O’Neil said he considered the premeditation and cruelty, in addition to the fact that the murders were committed in front of Valenzuela’s own child. He also spoke of Valenzuela lying to law enforcement and concealing evidence by burying the bodies in his backyard.

O’Neil said he did not see any remorse expressed from Valenzuela, and the judge lamented that a harsher sentence was not available.

“Indeed, that this defendant will not receive a sentence of death is a great, and undeserved, mercy,” he said.

Several family members of the Careccias made emotional pleas Monday asking O’Neil to send Valenzuela to prison for the maximum sentence possible, life in prison.

Many family members spoke to the court, asking for Valenzuela to never be released from prison.

The family also presented a video on their lives with the victims, Michael and Tina Careccia.

“He does not deserve mercy. His mercy is that he will not receive the death penalty for his atrocities,” special prosecutor Gary Husk said. “The defendant’s debt to society is long overdue.”

Many of the victims’ family members left the courtroom as the defense started presenting its case during the sentencing.