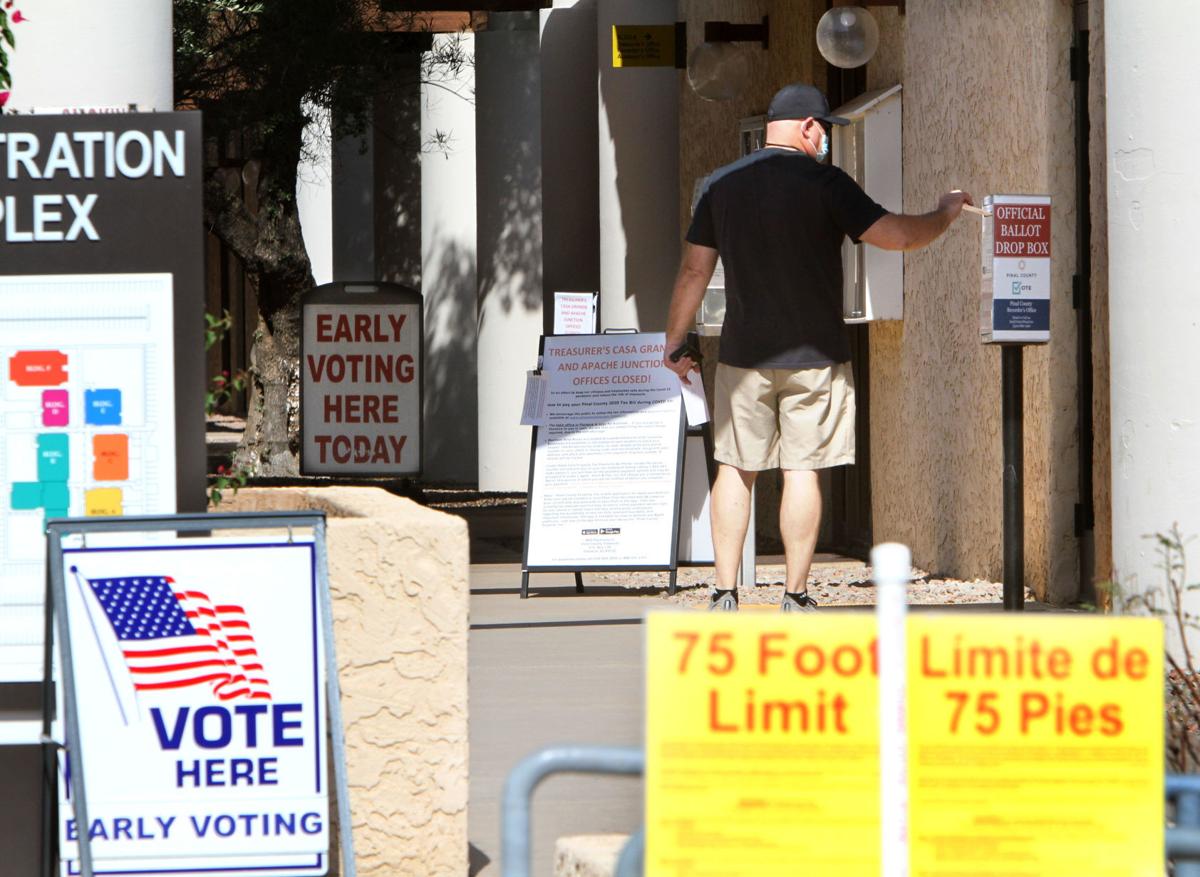 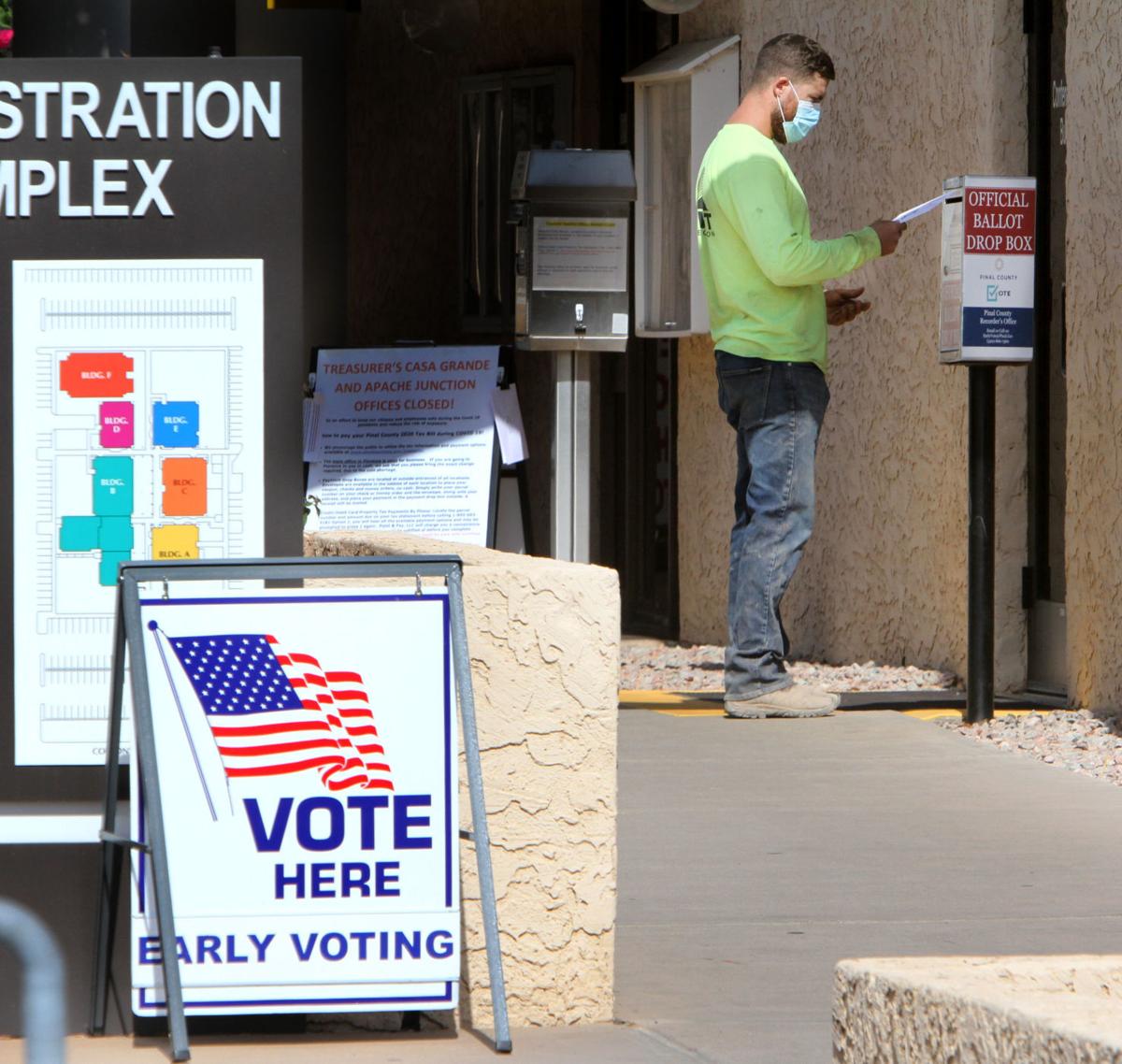 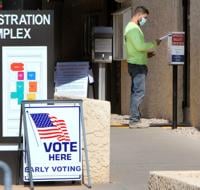 FLORENCE — Election Day security in Pinal County will include a sheriff’s “terrorism liaison officer” coordinating communications and members of the new citizens posse assisting with brief patrols of polling places.

Law enforcement will endeavor to be as unobtrusive as possible, Chief Sheriff’s Deputy Matt Thomas told the Pinal County Board of Supervisors Wednesday.

“We don’t want to be a factor in whether somebody votes or doesn’t vote. We just want to maintain safety and security at the locations,” Thomas said.

Uniformed deputies will do security checks at set times, showing a quick presence and looking for anything out of the norm, Thomas said. He said deputies are doing random patrols at early voting locations now and getting out of the way, “out of sight, out of mind.”

Vice Chairman Pete Rios, D-Dudleyville, commended Pinal County Elections Director Michele Forney for not having uniformed police officers at the polls unless they’re needed. He said seeing the police is intimidating to a lot of voters. “Immediately their thought is ‘There’s problems here; I’m not sure I want to go there and get in the middle of whatever’s going on.’”

Supervisor Todd House, R-Apache Junction, said he’ll be at his polling place holding a sign for his favorite candidate. He asked if he sees rowdy people that may be distracting voters, “Where do I call?” Thomas replied he should call local police in a city or the Sheriff’s Office in the county.

Thomas said the Elections Department has provided information to the Sheriff’s Office about the 75-foot polling place boundary and what can and can’t be enforced within it. Outside of that boundary, the normal state laws apply, he said.

If people are being rowdy, and someone complains they’re disturbing the peace, it would be handled like any other disorderly conduct complaint. The sheriff’s non-emergency line is 520-866-5111, he said, but more urgent calls can go to 911.

Thomas said the terrorism security officer, or TLO, will also be monitoring social media for any signs of trouble “to be preemptive and get in front of it.” Roberto Reveles of Gold Canyon asked if the county had considered designating some locations “emergency sites” as provided by law, to prevent protests and counter-protests.

Forney said the Elections Department has identified four emergency locations, which are sites of The Church of Jesus Christ of Latter-day Saints, which forbid any electioneering on the sites.

Thomas said churches and schools still control what’s allowed on their property beyond the 75-foot boundary, and if they don’t want demonstrators, police will tell them to leave. But on public areas, “we’re riding a fine line of First Amendment rights when we show up and start to suppress activities.”

The Sheriff’s Office is planning for extra personnel throughout the county to respond if there are problems, such as groups getting violent with each other or civil unrest, Thomas said. He said his department will also be working on Election Day with the Pinal County Office of Emergency Management in its Emergency Operations Center.

Deputy County Attorney Chris Keller said the courts have issued an administrative order that the office will be on stand-by, and have designated personnel should anything need to be filed in court that day.

Reveles also asked if the sheriff’s new civilian posse would be deployed.

Thomas said they’ll assist in “roving patrols” of polling places. “They are part of the plan to check the polling sites — go through, make sure everything’s fine, nobody needs anything and then they’re on their way.”

Forney said everyone has a First Amendment right to speak, but the 75-foot election boundary is meant to keep out people who might influence voters and is “the only place where we have firm authority to remove people.”

People can wear shirts and stickers supporting candidates and issues, they just can’t try to actively influence others inside the polling place. It’s about letting voters have their “moment of peace,” Forney said. People are free to be in the parking lot, even yell and shout, and election workers won’t try to stop that “unless it crosses the line.”

Most polling places will have extra workers, and they’ve been trained on the Secretary of State’s Office guidance for preventing voter intimidation at the polls, including de-escalation techniques, Forney said. She said her department is also working with the county’s Emergency Management and Information Technology departments to address other potential emergencies or cyber incidents.

“We expect some pushback on mask usage,” she continued. Many polling places require masks, including many schools and most churches. But no voter will be turned away for refusing to wear a mask. They will be allowed to vote, and the booth will be disinfected after they leave. For additional safety, voters may bring their own black or blue pens to vote, Forney said.

Voters are encouraged to avoid the busiest times — at 6 a.m. when the polls open, at lunchtime and just before the polls close at 7 p.m. “Of course, if a voter is in line at 7 p.m., they will be permitted to vote,” Forney said.

Voters should go to their assigned polling place. The media surrounding Pinal County refer to “voting centers” where people can vote regardless of their address, but Pinal doesn’t offer this yet. People can find their polling place by visiting My.Arizona.Vote, Forney said.

Forney thanked the board for giving poll workers a $50 raise starting with this election, which also helped attract workers.

Supervisor Steve Miller, R-Casa Grande, asked on behalf of a constituent if it’s possible to change a vote after it’s already been cast, which is an option in some other areas.

Forney replied no, but she urged voters to look over their ballot and make sure they received the correct one “that makes sense for where they live.” If a voter makes a mistake, he can receive up to three ballots to make it right.

County Recorder Virginia Ross told the board that 105,526 early ballots had been received as of Wednesday morning, far more than in 2018 or 2016. All the recorder’s offices are very busy, including serving 1,400 people who voted early on Tuesday. In all, 17,277 people had come to vote early in person, and 34,748 had used one of the county’s eight ballot drop boxes.

“We are emptying those boxes, sometimes up to four times a day.”

Even though the county hired temporary employees, the temp agencies couldn’t supply all of the need, Ross said, so county management stepped up to loan employees to the Recorder’s Office for the week and the weekend. She thanked the county manager and department heads for the extra help.

County will intervene in sale of Johnson Utilities

FLORENCE — Pinal County is filing to take part, or “intervene,” in the Arizona Corporation Commission’s deliberations on whether to approve th…

FLORENCE — The Pinal County Board of Supervisors made the final results of the Nov. 3 general election official with the canvass on Wednesday.