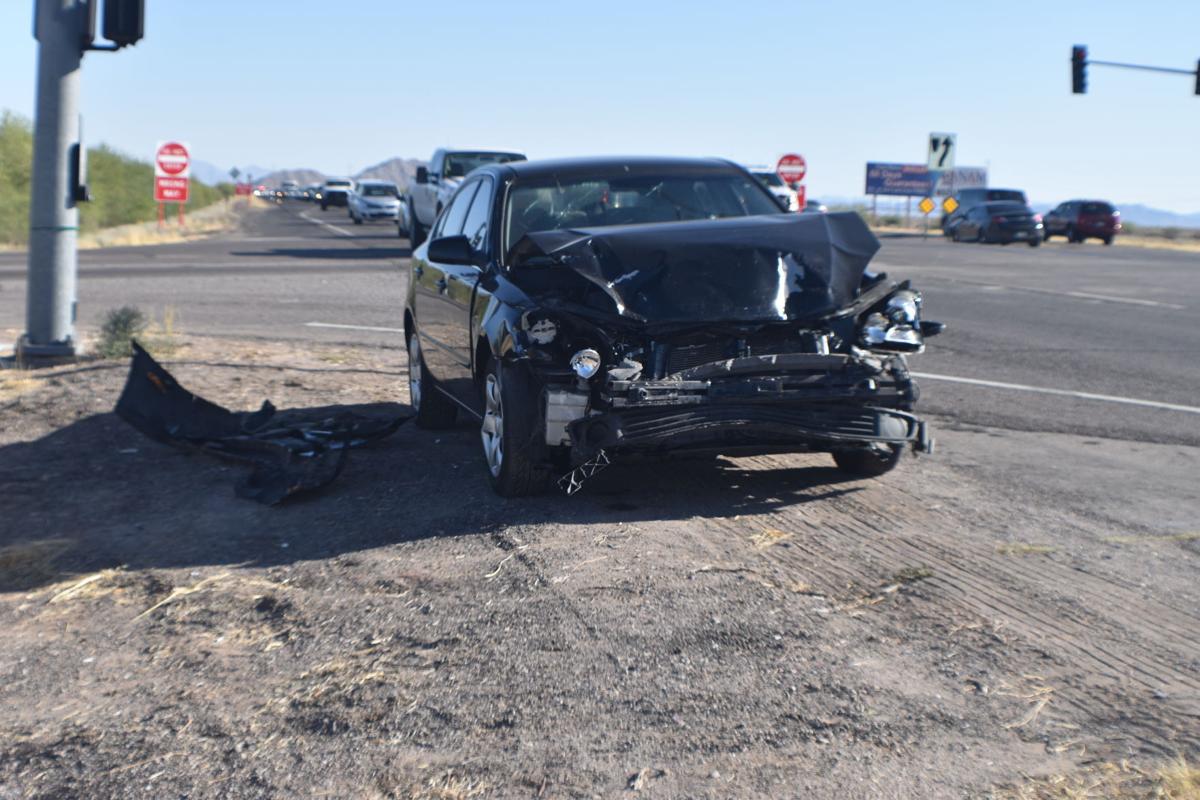 A collision at the intersection of State Route 347 and Riggs Road in 2017 involved two cars, one of which was a police vehicle. The intersection is the cause of many headaches. 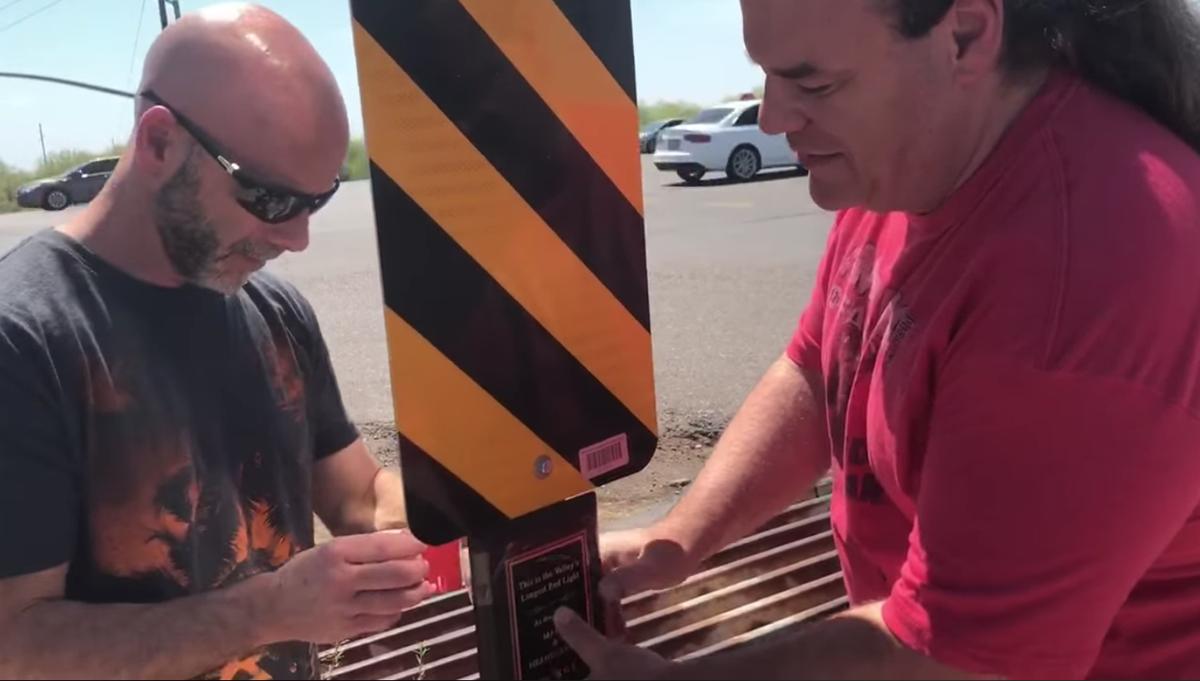 Mark Devine, left, and NeanderPaul Marshall tape up a plaque recognizing the intersection of State Route 347 and Riggs Road as having the longest red light in the Valley.

A collision at the intersection of State Route 347 and Riggs Road in 2017 involved two cars, one of which was a police vehicle. The intersection is the cause of many headaches.

Mark Devine, left, and NeanderPaul Marshall tape up a plaque recognizing the intersection of State Route 347 and Riggs Road as having the longest red light in the Valley.

MARICOPA — The chronic headache of State Route 347 may get some relief after the Senate Appropriations Committee voted to allocate $35 million to improvements to 347, mainly for an overpass at Riggs Road.

Legislators met March 2 to discuss a variety of infrastructure and transportation bills including House Bill 2068, which would provide $35 million for an overpass at Riggs Road and SR347, a notoriously dangerous area.

Rep. Bret Roberts, R-Maricopa, sponsor of the bill, spoke at the meeting in favor of HB2068, citing these dangerous driving conditions.

“The 347 interchange is one of the most problematic interchanges in the state of Arizona. We have had nine deaths in the past two years at this particular intersection. We just had another accident there last week,” Roberts said. “The overpass is probably the most problematic portion of the 347 widening project, which is why I’ve targeted it.”

The bill represents one portion of the larger 347 widening project that spans all the way from the Interstate 10 and 347 interchange 20 miles south through the city of Maricopa to the Ak-Chin Indian Community.

During the discussion, Maricopa Mayor Christian Price further described the issues Maricopans face when trying to commute to Phoenix — normally about a 30-minute drive to the north.

“State Route 347 is our lifeblood, that is literally the artery of our heart,” Price told committee members. “Eighty percent of my residents commute north to (the) Phoenix metro area every day and it only takes a fender bender before it’s a three-hour backup. You have a fatality and now you’re talking eight hours to try and get around — it’s just quite the nightmare.”

The city of Maricopa pledged to add an additional $1 million to the project if approved, something Roberts felt represented the city’s commitment to road safety and improved roadways for its citizens.

“This is such an important issue for the city of Maricopa they’re willing to put in $1 million and actually put it outside of their city limits,” Roberts told the committee.

Committee members voted 9-1 to approve HB2068, with Sen. Michelle Ugenti-Rita dissenting. She cited her desire to vote consistently with her previous votes on transportation spending as her reasoning for voting no.

Later on in the evening at a City Council meeting, Roberts told the council he was happy to sponsor the bill and hopes to have negotiations with other involved entities regarding the overpass soon.

“We’re working with a bunch of different entities as far as trying to get some commitments from Gila River (Indian Community),” Roberts said. “The RTA lawsuit — hopefully that goes in our favor, and that will bring in another approximately $30 million toward this overall project that will run north of $150 million all together from the interchange, from widening, from the overpass, from all of it together.”

The Pinal Regional Transportation Authority is currently stalled in a lawsuit over a 2017 voter-approved sales tax allocation for Pinal County roads. If the lawsuit put forth by Harold Vangilder and the Goldwater Institute is dismissed, the money collected in the years since 2017 — now totaling over $30 million — would be doled out as originally intended.

After Roberts concluded his statement before the council, the city moved to Item 7.6, which would commit the additional promised $1 million to the 347 overpass project.

“We’ve got some work ahead of us to move this thing forward, but piecemeal, it all starts somewhere,” Price said. “By taking this money that’s in our general fund — not necessarily right now, because it’s not required today — we’re passing this resolution that will commit these transportation dollars toward a future time when construction or design is ready.”

A motion by Councilman Bob Marsh was approved unanimously.

Helicopter searches for injured driver after crash on SR 347

Vehicle rolls over after head-on collision on SR 347

MARICOPA — A crash on State Route 347 in the mid-afternoon on Sunday involved four vehicles,…

Westbound Riggs Road closed at 347 due to reported fatal crash