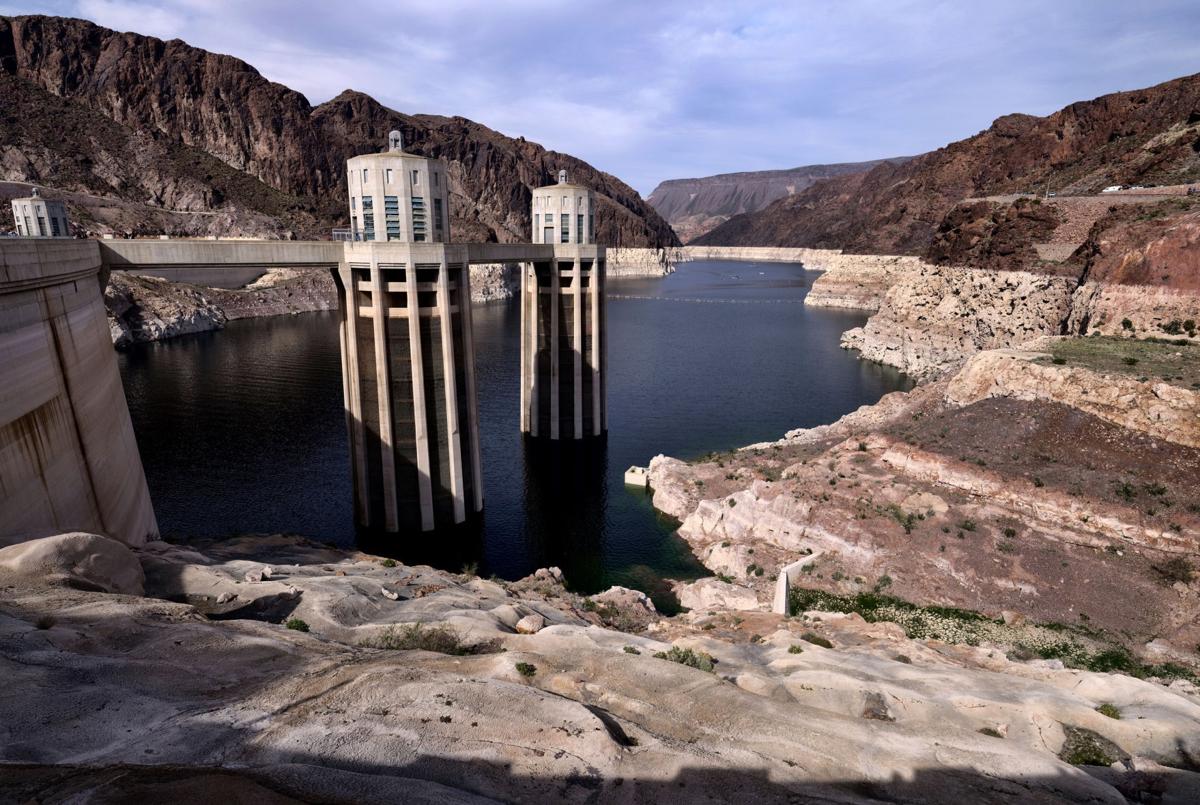 This March 26, 2019 photo shows the water level of the Colorado River, as seen from the Hoover Dam, Ariz. For the seven states that rely on the Colorado River that carries snowmelt from the Rocky Mountains to the Gulf of California, that means a future with increasingly less water for farms and cities although climate scientists say it's hard to predict how much less. The U.S. Bureau of Reclamation on Thursday, Aug. 15, 2019, will release its projections for next year's supply from Lake Mead, which feeds Nevada, Arizona and California. (AP Photo/Richard Vogel) 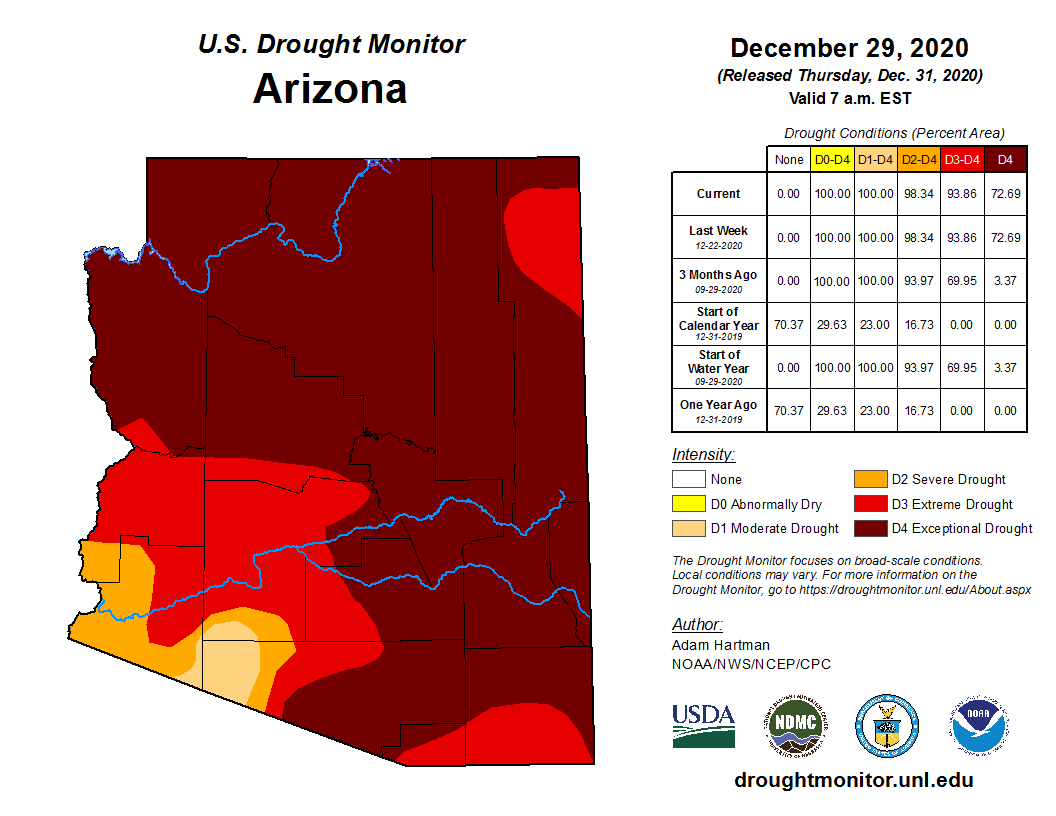 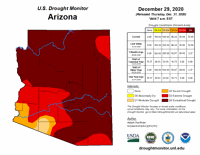 This March 26, 2019 photo shows the water level of the Colorado River, as seen from the Hoover Dam, Ariz. For the seven states that rely on the Colorado River that carries snowmelt from the Rocky Mountains to the Gulf of California, that means a future with increasingly less water for farms and cities although climate scientists say it's hard to predict how much less. The U.S. Bureau of Reclamation on Thursday, Aug. 15, 2019, will release its projections for next year's supply from Lake Mead, which feeds Nevada, Arizona and California. (AP Photo/Richard Vogel)

COOLIDGE — A recent study from ProPublica and the Rhodium Group identified Pinal County as the state’s second-most at-risk county due to climate change.

The study combined several factors to evaluate the impact on areas that would take shape over the years 2040 to 2060. Pinal County is projected to see major increases in heat, as well as drought, with resultant losses in agriculture and economic damage.

Despite the projections, various interconnected county plans see major development all along the Interstate 10 corridor between Phoenix and Tucson, as well as a planned north-south highway between the East Valley and Tucson that would go through Coolidge and the planned Inland Port megacomplex.

Pinal Partnership President and CEO Harold Christ said that in particular, drought is a major concern for county planners.

“We’re not seeing rainfall or snow packs that we normally see,” Christ said. “Pinal County has historically been such a strong agricultural economy. I think as Americans we take for granted a lot of things until it becomes an issue.”

Christ described plans for a gradual shift away from agriculture — which he said would be “diminished, not phased out completely” — to less water-intensive economic projects such as manufacturing plants like Nikola and Lucid, which in addition to solar plants are all tied into the renewable energy industries.

“It is a bittersweet pill,” Christ said. “We are seeing the positive things as far as the economy in Pinal County, but that is offset by the agricultural community who is going to be impacted by this.”

The county’s economic development manager, Tim Kanavel, agreed that agricultural losses, which could be worth several billion dollars county-wide, are a long-term issue. He said his goal was to intentionally target less water-intensive businesses to bring into the county, as well as bringing in renewable energy innovations.

“We went after high tech because it doesn’t use as much water,” Kanavel said. “They learn how to work with minimum of waste and resources. They’re trying to get a smaller carbon footprint.”

Beyond climate change and water scarcity, there are limitations on developing, some of which are due to state and federal land protections, but also the desire of many residents to live near open spaces. According to Christ, polling lists proximity to open space as the No. 1 attraction for new residents to the area.

“People don’t want to be told you can’t build on that property here or there,” Christ said, “but we will have to reach some consensus on where some of that needs to happen.”

The Arizona Department of Water Resources regulates water usage, and larger development projects have to be able to guarantee a 100-year water supply before gaining approval. Currently, much of Pinal County gets its water from the Central Arizona Project, which draws water from the Colorado River to the west.

Coolidge City Manager Rick Miller described water usage in the area as an ongoing, long-term concern, but said for now, it isn’t a major impediment to current development.

“We take water conversation seriously,” Miller said. “We have a water resources master plan that was just done by WestLand Resources for us. You can’t have unlimited growth but for the foreseeable future and pre-approved projects, there’s plenty of water.”

According to Miller, the underground aquifer tables have risen since the early 1990s when the CAP project first began delivering to the area.

“We are actually doing a lot on our end,” Miller said. “When people consume on a daily basis, that water is treated and can be used to recharge aquifers and we get recharge credits. Someday we can use that water to irrigate green belts, rather than domestic water supplies.”

Christ said he had seen major changes over the past decade in how communities in the county work together to coordinate on water and other environmental issues.

“We didn’t have that before,” Christ said. “In terms of getting water, localities said: ‘I don’t care where you get yours.’ Not now. People are working together and I think you will find some really strong leadership in every one of these communities.”

GLENWOOD SPRINGS, Colo. -- A coalition of high-profile businesses, including Coors Seltzer a…

GREELEY, Colo. -- All signs are pointing to a dry start to 2021 across much of the Colorado …

Las Vegas is at the heart of western states’ water conundrums

CASA GRANDE — The City Council has sent to public vote a 2030 General Plan calling for a reduction in household water use.

FT. COLLINS, Colo. -- Colorado is no stranger to drought. The current one is closing in on 20 years, and a rainy or snowy season here and ther…

How dry is the Colorado River Basin? We explain it in 5 numbers

FT. COLLINS, Colo. -- Dry conditions are the worst they’ve been in almost 20 years across the Colorado River watershed, which acts as the drin…

Payson’s 20-year struggle to secure a “forever” water supply stored in the C.C. Cragin Reservoir looks more and more like a stroke of genius as the state’s 20-year mega-drought continues and the reservoirs on the Colorado River dwindle.