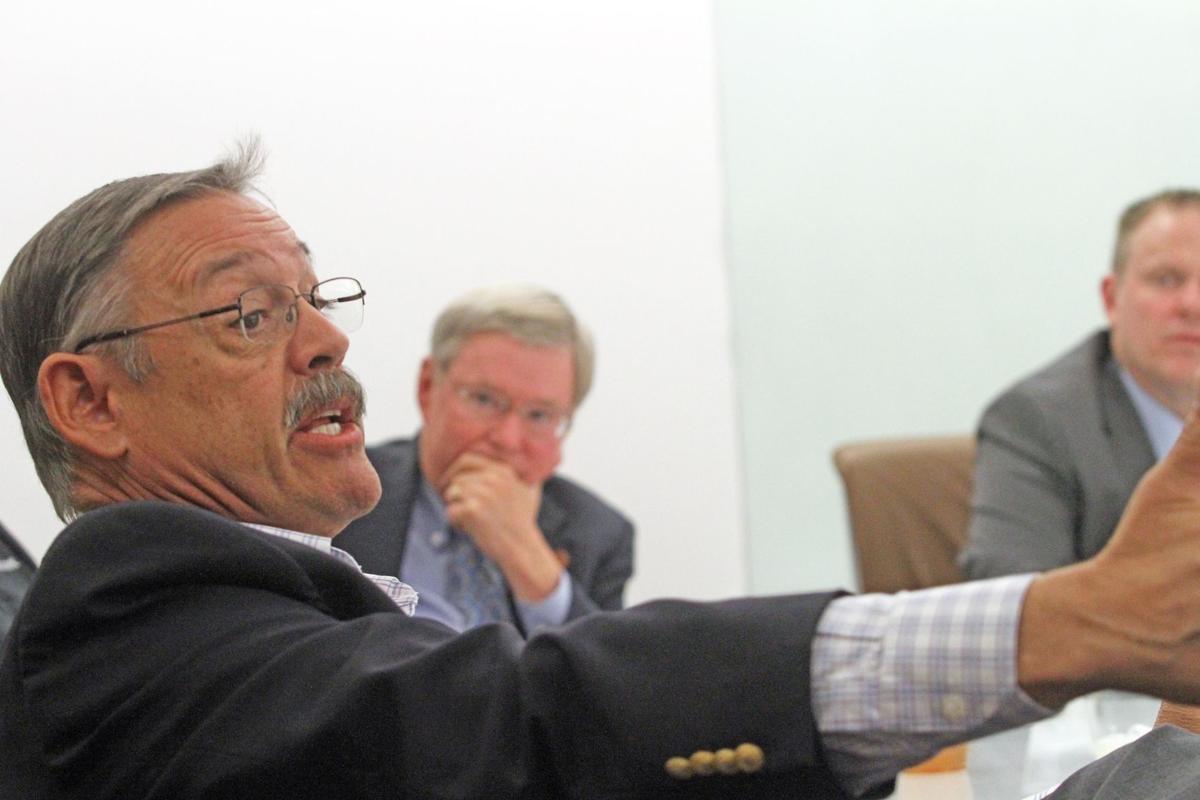 Rep. Mark Finchem talks during a meeting of District 11 legislators and Maricopa city officials on Nov.12 in Maricopa. 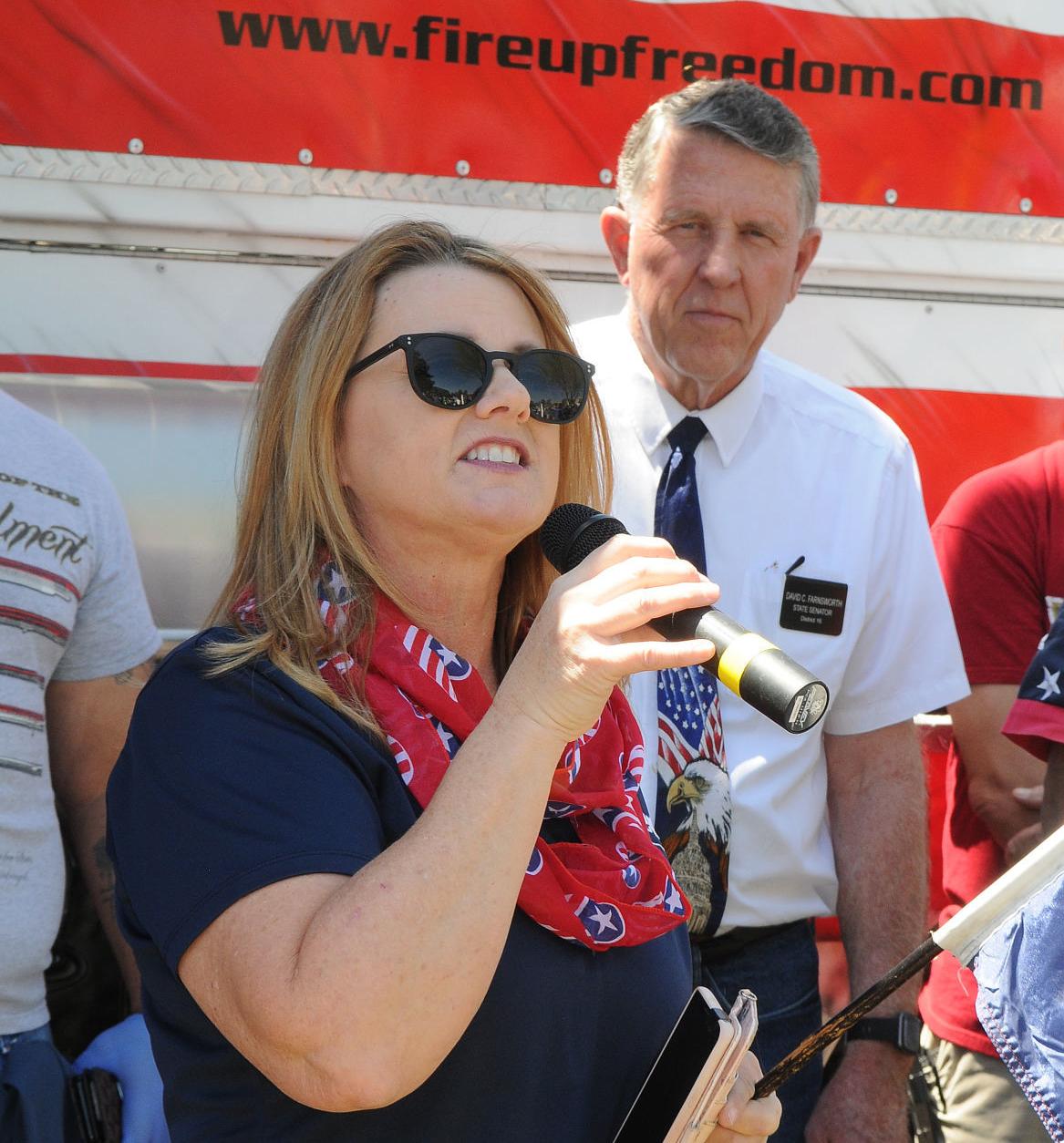 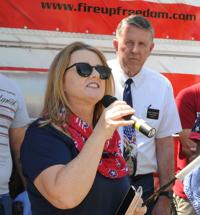 Rep. Kelly Townsend, R-Mesa, addresses those protesting the closure of businesses Monday at the state Capitol.

Rep. Mark Finchem talks during a meeting of District 11 legislators and Maricopa city officials on Nov.12 in Maricopa.

Rep. Kelly Townsend, R-Mesa, addresses those protesting the closure of businesses Monday at the state Capitol.

Rep. Mark Finchem, R-Oro Valley, wants a constitutional amendment sent to the ballot to require governors to get the “advice and consent” of the Legislature within a certain period — perhaps 14 days — of declaring an emergency. He said the state’s chief executive would need to provide lawmakers with “evidence that an emergency exists.”

Rep. Kelly Townsend, R-Mesa, said she’s not willing to wait to have voters consider constitutional restraints on the power of the governor. She wants a special session of the Legislature this fall to reconsider the powers that were given to governors, some specifically in the wake of the 9/11 terrorist attacks, in 2002.

Senate President Karen Fann, R-Prescott, doesn’t see the need for such a rush. But she, too, thinks that once this crisis is over that legislators need to consider exactly how much unilateral power they have given governors.

But House Minority Leader Charlene Fernandez, D-Yuma, said voters elected Doug Ducey to do a job and that they — and lawmakers — should give him the latitude to do what he thinks is necessary.

In each case, those interviewed by Capitol Media Services say this has nothing to do with Ducey, the emergency he declared in March and the ways he has exercised those powers over everything from what businesses can be open to when people need to stay at home.

“We obviously respect the tough position that the governor is in,” Fann said. “It’s kind of a no-win situation for him.”

But in some ways it is about Ducey since he is the one who declared the emergency.

Fann said, with the knowledge now of how all that works, that issue requires a new look at those laws and how they fit into the constitutional balance of power that’s supposed to exist among the executive and legislative branches of government.

“They probably thought it would be 30, 60 days,” she said of those who crafted the laws. And the thinking, Fann said, probably was based on the idea that it’s not easy to call lawmakers into special session to approve specific acts giving the governor special powers.

“But I seriously do not think that this was intended to go on for three, five, six months,” she said.

Ducey, for his part, isn’t interested in any limit on either the breadth or the length of his powers. Daniel Scarpinato, his chief of staff, said what’s happening now with COVID-19 shows the law is working the way it was designed.

“The virus is widespread and it’s spreading and the numbers are increasing,” he said.

“So to have a date certain of when it would end would be really irresponsible because this is going to go on for some time,” Scarpinato said. “There’ll be additional public health decisions that need to be made.”

What that also means is that, under current law, Ducey’s power to make those without legislative input continues as long as he wants.

So what would be wrong with a requirement for the governor, after some period of time, to go to the Legislature, explain the situation and seek permission to keep the emergency in place?

“Our perspective would be that the way to determine whether a public health emergency should continue would be based on public health, the recommendation of public health (officials) and the facts on the ground,” Scarpinato said. “In this case, the crisis is escalating; the cases are growing.”

Finchem, however, said Ducey’s stated goals in declaring the emergency appear to have morphed.

“It was to flatten the curve on hospitalization,” he said, spreading out over a longer period of time the number of people who got the disease to prevent overwhelming health care facilities.

“It was not to flatten the goal on transmission,” Finchem continued. “Well, now we’ve moved the goalposts.”

And that, he said, is where constitutionally required legislative oversight would fit in.

Scarpinato said that confuses two separate issues: the declaration of emergency, which was issued first, and then the stay-at-home order that he said was aimed at slowing the spread.

Finchem said he still believes that, at some point, the governor should have to come to the Legislature, explain the decision to declare an emergency and, potentially more significant, detail exactly what metrics he is using to determine when that declaration — and the expanded powers the governor assumes — is no longer necessary.

And, absent legislative blessing, the emergency declaration would cease.

“This is against the idea that a governor, any governor, can have unlimited, unrestrained power without the people intervening and saying, ‘Not so fast there, cowboy,’” Finchem said.

Townsend said something like this would restore the balance of power.

“The Legislature is a coequal branch of government, not subordinate to the executive,” she said.

Townsend is looking at what other states are doing to find a model that might work in Arizona. One, she said, would limit the number of days the governor can have a declared emergency without getting legislative consent.

Some of the powers, Townsend said, followed the terrorist attacks in 2001 “when fears of biological warfare were cresting.”

“I believe the entire state now realizes that this is not a good idea, and the people in each district want their voice to be heard and desire the representative government that they were promised,” she said.

With Ducey showing no interest in calling a special session on the issue, Townsend pointed out that lawmakers can call themselves back to the Capitol with a two-thirds vote of each chamber.

That, however, would require at least some Democrats to go along with the Republican majority.

For the time being, though, Fernandez sees no reason to act.

“I really do trust that someone elected to that office should know when to use that and when not to use those powers,” she said. In fact, Fernandez said, she doesn’t believe that Ducey has used those powers enough to deal with the current pandemic “as well as he could.”

“But I feel comfortable knowing that he could,” she said.

This isn’t the first time questions have been raised about the latitude given to the governor.

That 2002 law, crafted in the wake of the 9/11 attacks, gave the chief executive broad new powers to order medical examinations and even isolate and quarantine people without first getting court approval. And it even empowered the governor to use the National Guard to enforce those orders.

Only 10 lawmakers voted against the plan, including House Minority Whip Robert Blendu, R-Litchfield Park. He said the governor already has broad emergency powers.