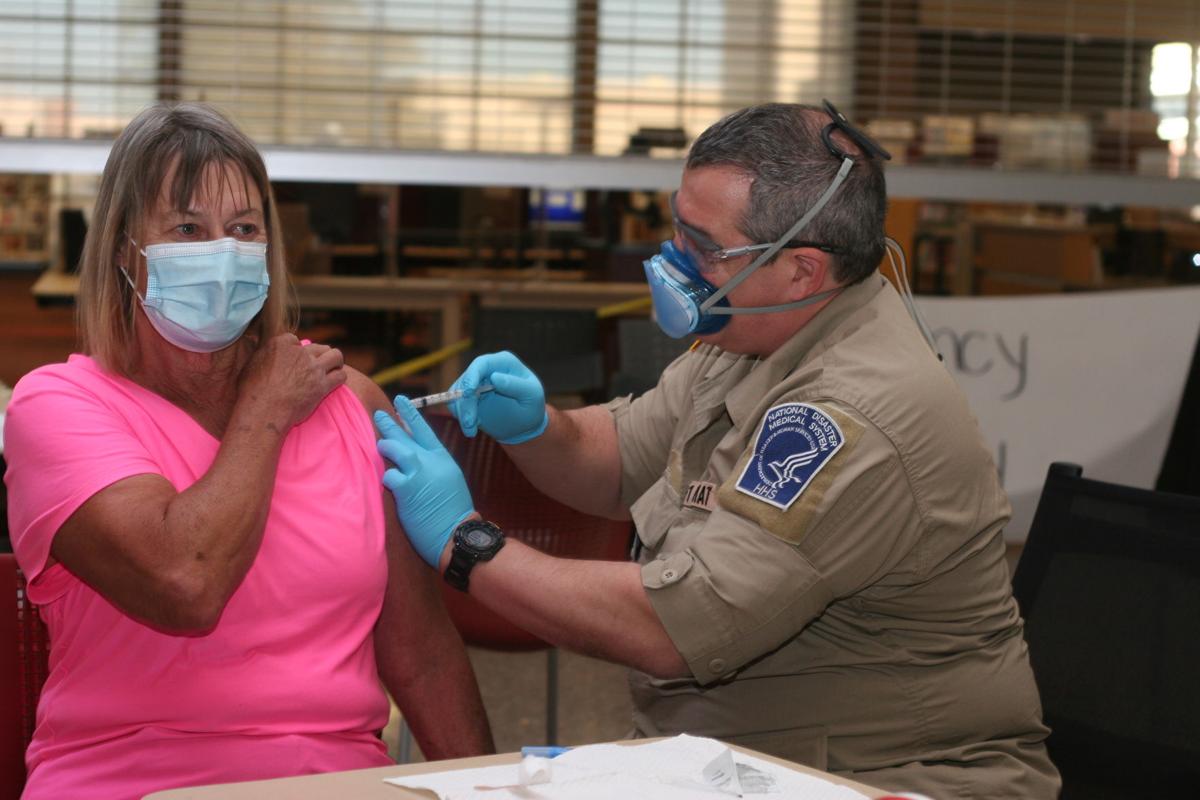 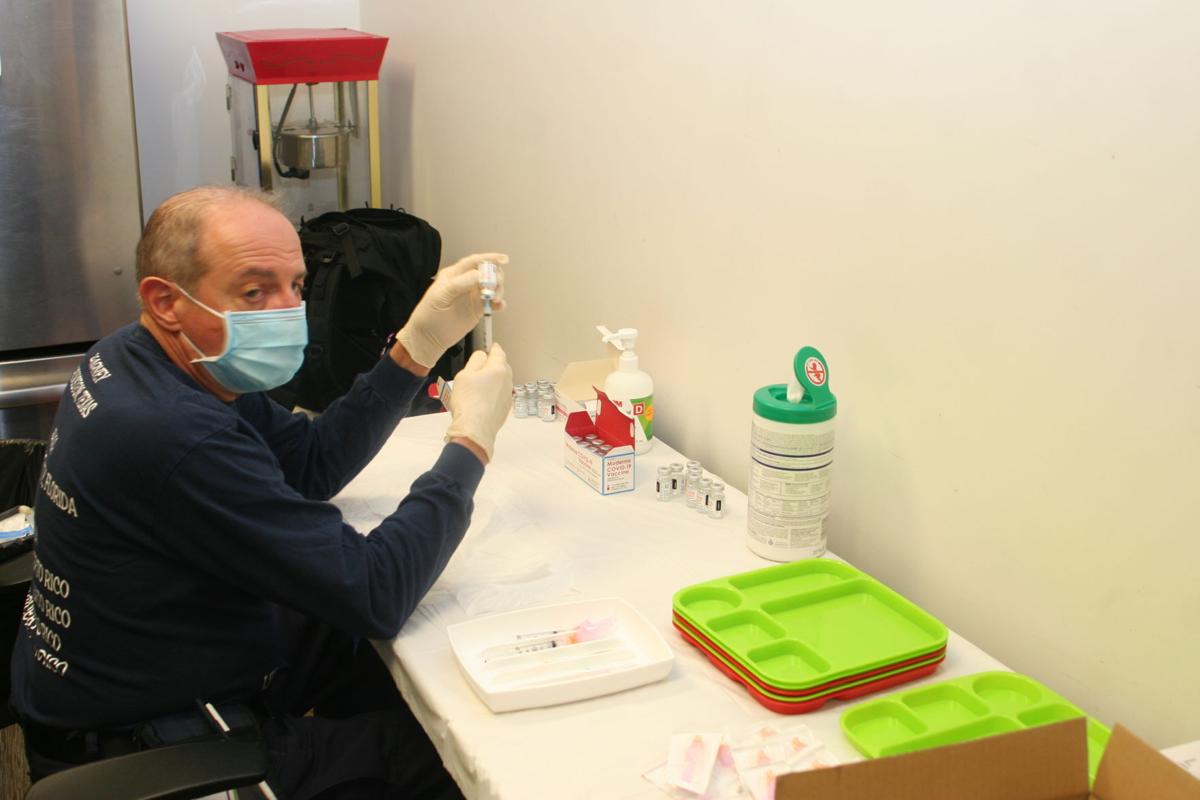 Jim Gervase, a retired hospital pharmacist from Erie, Pennsylvania, prepares vaccine to be administered Thursday at the Florence Community Center. 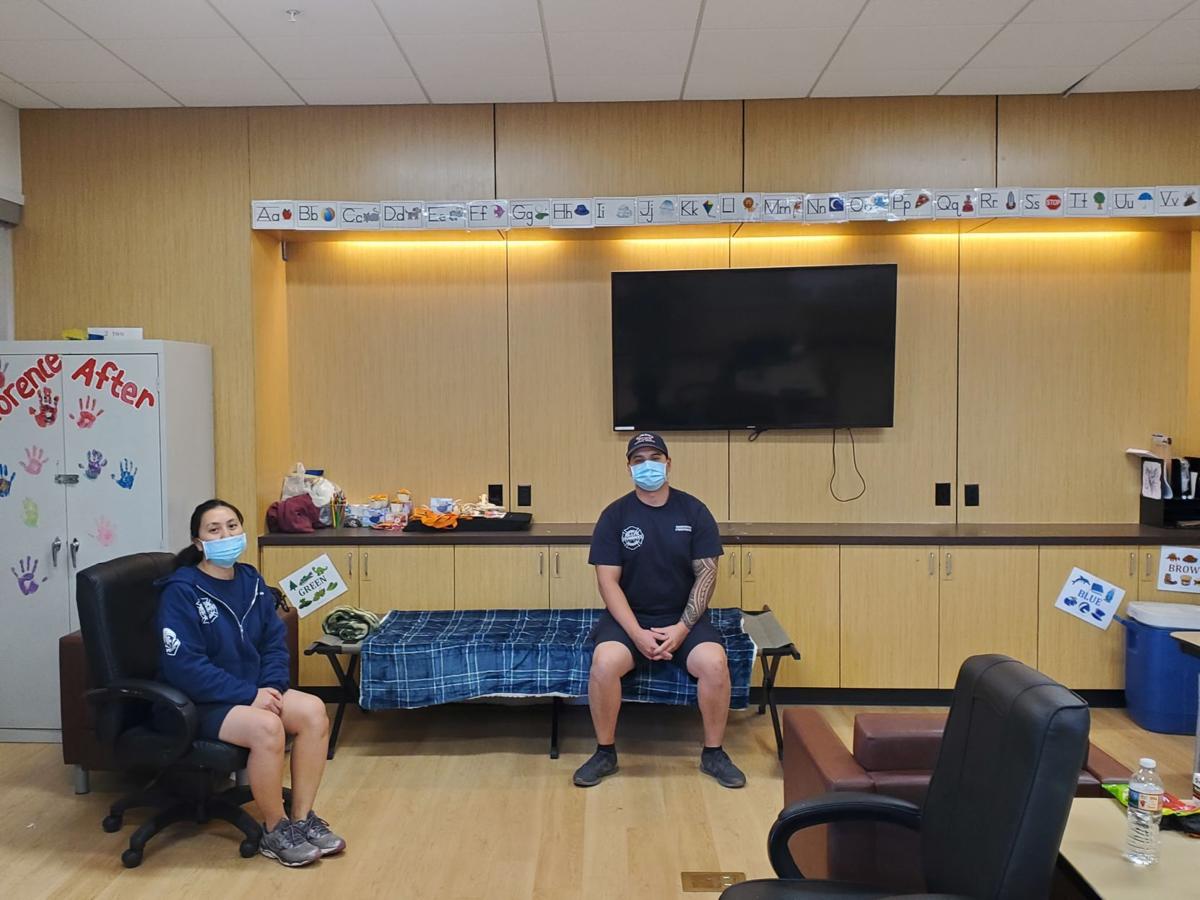 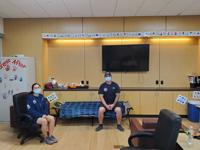 Florence firefighters Pip In, left, and Kristopher Torres set up in what is normally a library activity room Feb. 11 to assist any vaccine recipients who may need extra care. 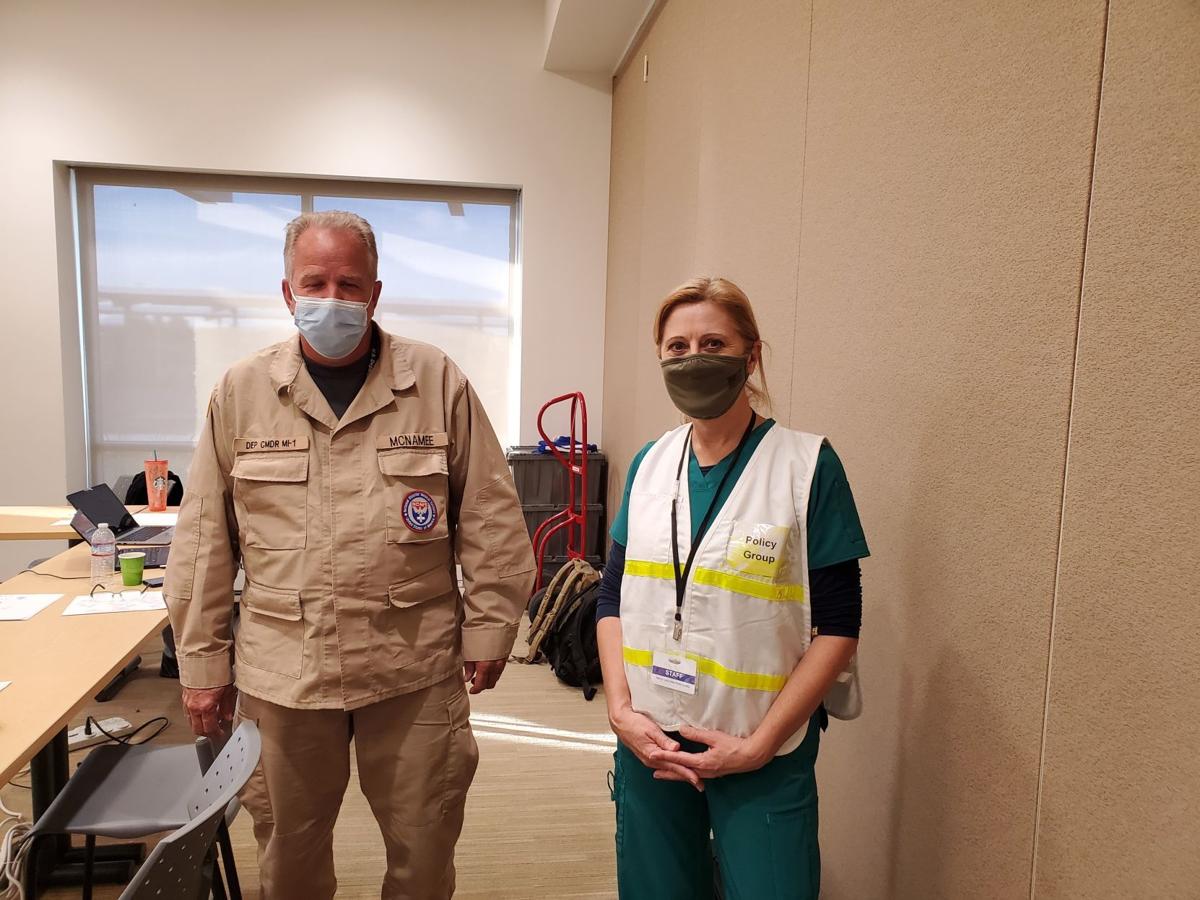 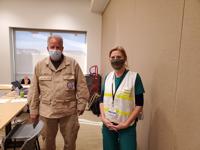 Jim Gervase, a retired hospital pharmacist from Erie, Pennsylvania, prepares vaccine to be administered Thursday at the Florence Community Center.

Florence firefighters Pip In, left, and Kristopher Torres set up in what is normally a library activity room Feb. 11 to assist any vaccine recipients who may need extra care.

FLORENCE — Persons 65 and older have now been added to the 1B-1 early vaccination group in Pinal County, health officials said.

This has increased those eligible for vaccination from approximately 75,000 to around 130,000 individuals, County Health Director Tascha Spears said. As of Saturday, the county had received enough vaccines for, and had administered, close to 46,000.

More than 1,200 people received their first doses of COVID-19 vaccine last week week at the Florence Community Center after a U.S. government team arrived to help expedite the shots.

Pinal County staff were notified that a team of federal vaccinators was headed this way, including physicians, nurses, paramedics and a pharmacist as part of a federal disaster medical service. Pinal County had been asking for a large vaccination site for some time now, Spears said.

“We were so grateful to hear we had 10 vaccinators and their commander here.”

Unfortunately, they didn’t bring any extra vaccine. “So that has become our dilemma and our challenge as always, and they clearly recognize that and are also taking that information back with them to FEMA (the U.S. Federal Emergency Management Agency),” Spears said.

Pinal County staff assembled the POD, or “point of dispensing,” site in less than 48 hours, “and that is by virtue of the partnerships” between Pinal County Emergency Management, local law enforcement, firefighters and the civilian community emergency response teams, or CERTs, from the city of Maricopa and the town of Florence, Spears said. “So it was really the community that pulled together. … (Federal team members) were so impressed that our partnerships were so strong that we could do this.”

More than 600 people were vaccinated in each of the first two full days the clinic was open, and Spears said they planned to give out the county’s last available vaccines on Friday.

When the county receives its next shipment of vaccine, the federal team will be gone. “We have asked for another team to replace them, and we have asked for support services,” Spears said. She added she would like to continue to use the Florence Community Center as a vaccination site.

“We are so grateful to the town of Florence and the leadership for assisting immediately, on the weekend, allowing us to set this up and helping us every step of the way,” Spears said. The community center has also hosted COVID-19 tests for some time, and the clinic worked to keep those patients strictly separate from those receiving the vaccine.

“The folks in Pinal County have done just a great job organizing,” said vaccinator Wes Wallace, from the University of North Carolina School of Medicine. “It’s just a very efficient operation and it’s helped us to see a lot of folks quickly.”

Members of this particular Disaster Medical Assistance Team, or DMAT, came primarily from North Carolina. The team members were in Florence as part of a two-week mission away from their regular jobs, according to Russell McNamee, acting deputy commander for the team.

Jim Gervase of Erie, Pennsylvania, a retired pharmacist on the team, said, “all these people on the (Pinal) county health department are tremendous. … It made it easy for us to help them, because they know what they’re doing.”

Another vaccinator from North Carolina, “Dr. Ted,” who declined to give his full name, said he had met “all kinds of cool people” receiving vaccinations. “I’ve learned a lot about pickleball and equestrianism and just the geography of the Southwest. There’s some amazing folks that live and spend time out here.”

He said the clinic started up slowly on Feb. 9, allowing the team to “figure out what all the kinks were.” They then began giving more than 600 shots a day, “and it’s been absolutely fascinating.

“The cool thing about it is this is actually the best kind of medicine you can do as far as a return-on-investment. This is prevention.” Dr. Ted said his regular job is emergency medicine, and “that’s the other end of the game where it’s a lot harder to get a good result.

“So the more people we can get in and get vaccinated, the better overall response we’re going to see as far as this entire COVID-19 pandemic is concerned.”

The pharmacies listed on the Pinal Covid Vaccine location webpage are now receiving federal allocations of vaccine shipped directly to them. These were chosen by their corporate offices.

On Monday, Pinal County health officials reported 75 new cases but no additional deaths from the virus. That brings the county totals to 44,795 positive cases since the pandemic began with 709 deaths.

Arizona health officials reported 1,338 new COVID-19 cases on Monday as the state approaches 800,000 cases and 15,000 deaths since the pandemic began.

The state did not report any new deaths Monday, but the fatality numbers tend to be light on Mondays following a weekend lag.

The state is likely to surpass both benchmarks of 800,000 cases and 15,000 deaths on Tuesday or Wednesday.

Health officials say the coronavirus remains widespread across the state, but the surge that made Arizona the nation’s hot spot last month is receding.

The number of infections is thought to be far higher than reported because many people have not been tested, and studies suggest people can be infected with the virus without feeling sick.