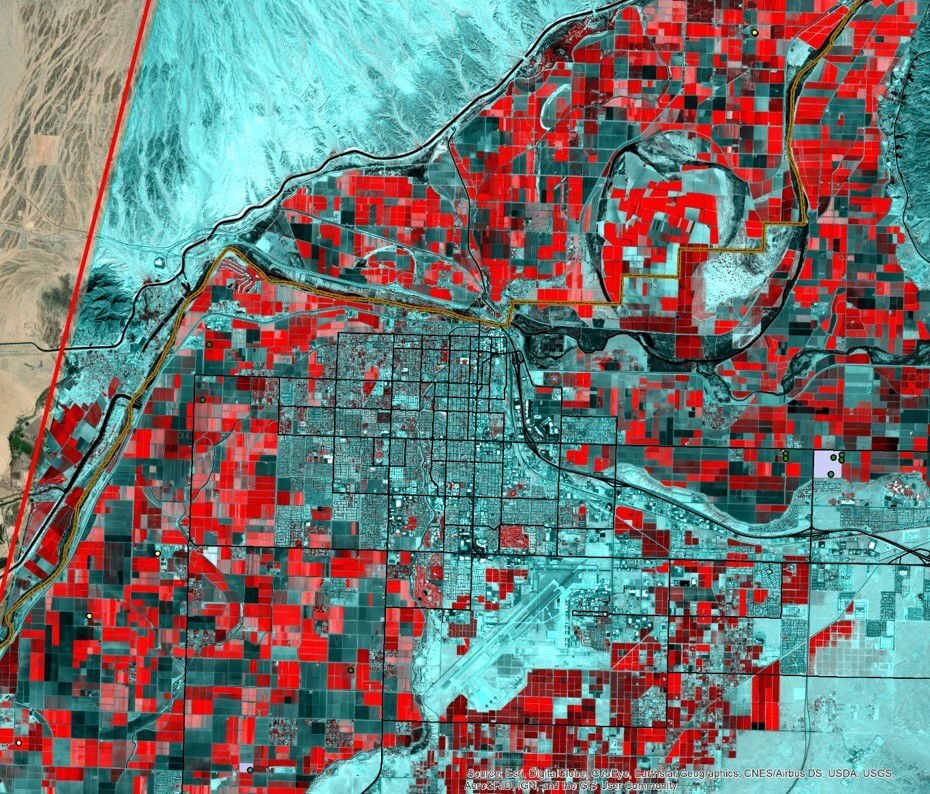 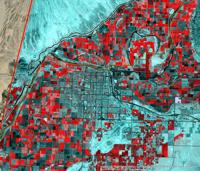 Imagery of Yuma crops in 2020 from the VENuS satellite. The reds indicate dense, chlorophyll-rich vegetation while the blues indicate bare soil and non-vegetated surfaces. 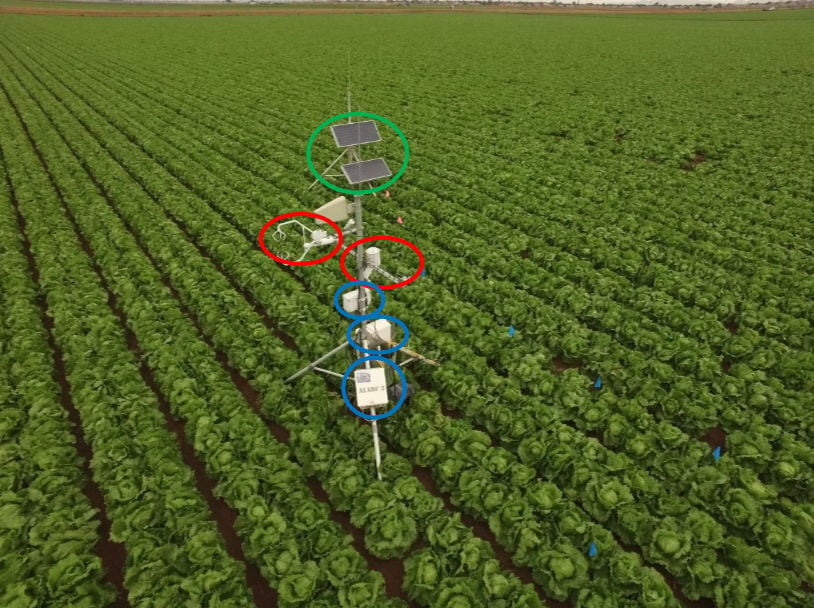 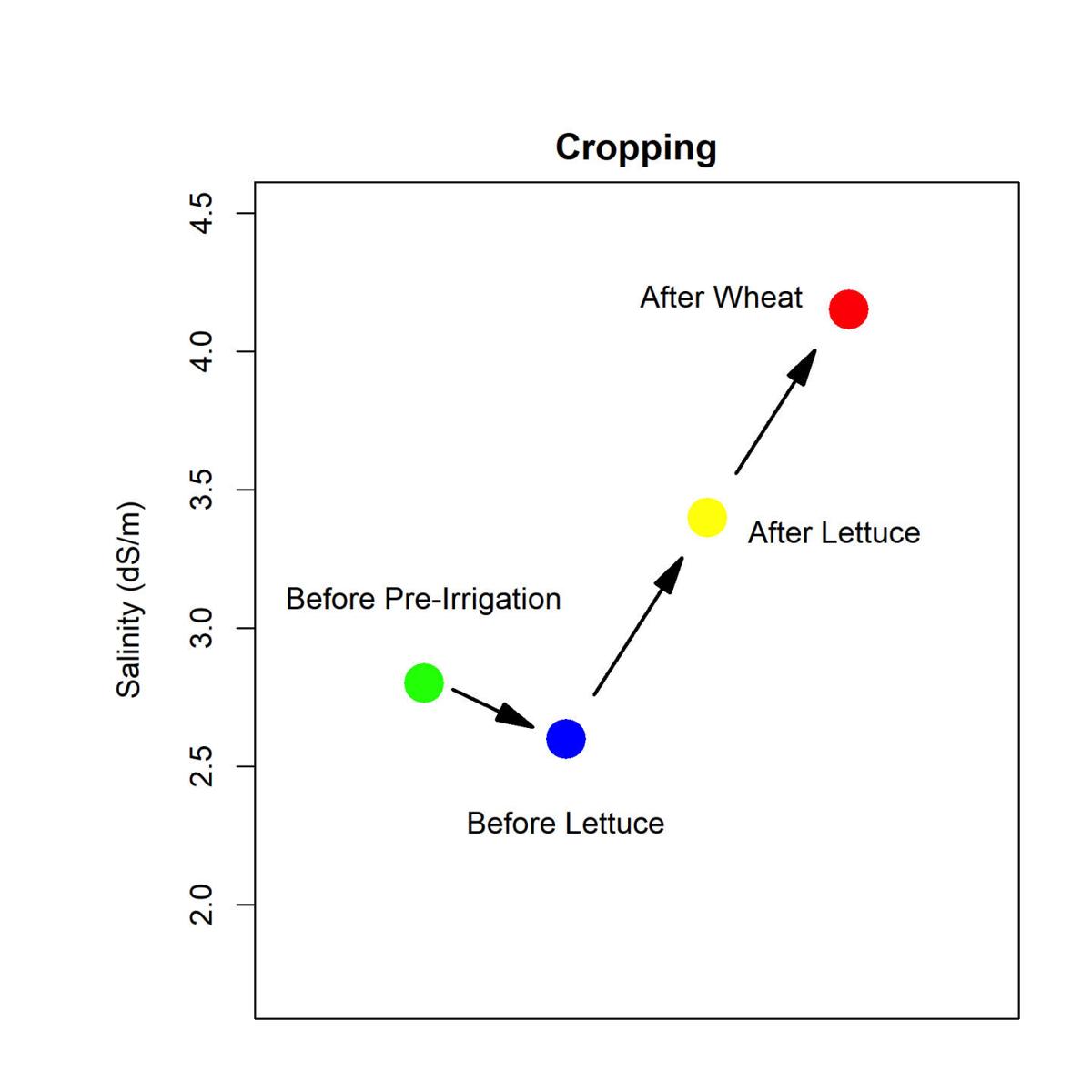 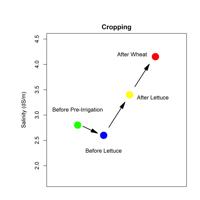 A figure showing the salinity levels of a given field after different crops.

MARICOPA — Southern Arizona is home to one of the largest and most important agricultural regions in the United States. In fact, it’s more than likely that the romaine in your last Postmates order, the L in your BLT sandwich and the spinach currently wilting in your fridge are all from the same agricultural hub to the west of Pinal County: Yuma.

Yuma’s food production tops $2 billion every year, and 90% of the country’s leafy greens come from the arid desert area. As the city’s agriculture grows, so do the needs of the growers. At the U.S. Arid Land Agricultural Research Center, research physical scientist Andrew French has been helping farmers with some much-needed updates to the water usage guidelines.

“The numbers that were used, or are still being used were done by the University (of Arizona) and by USDA over 20 years ago and were really solid, good research,” French said. “But the crop intensity has roughly doubled and yet the water consumption hasn’t changed, which is really a remarkable achievement by the growers. So we need to update those old numbers with new numbers because the yields have gone up dramatically.”

French began his work in Yuma and other Arizona communities like Ak-Chin in 2016, working with growers to measure current water needs and create better ways of managing the water. He also helps growers look at the salinity levels of the water and soil, a very important aspect of a successful growing season.

“What we’re doing is, we’re just saying, ‘This is how much water we see being used, these are the facts,’ what you do with that — we’ll have some suggestions, but we’re not aiming to tell them what they should use,” French said. “We hope to give advice on how much water the crop needs, and how much water is needed to maintain salt levels.”

Yuma is in a special position, as it receives its water almost exclusively from the Colorado River, which can be a benefit and a challenge. The river has been overburdened in the last couple of decades, and water rights have become more competitive.

“(Water resources are) a huge concern, which is probably why the Yuma district is so motivated and supportive of the project,” French said. “It’s a critical issue, because what I’ve been told by growers is they’re worried. They’re worried that somebody’s out to get their water. They’re worried that the cities will buy water rights. … They want scientific data to show that they are good stewards, because the Colorado River is being overtaxed, everybody knows this.”

“Salt levels have been improved on the Colorado River in recent years because of watershed management the bureau has done in Colorado,” French said. “The problem is that there is salt in the water, and when you irrigate a shallow-rooted crop, you have a lot of evaporation. The water evaporates and leaves behind that residual salt.”

The only way to remove the high salt content in the soil after growing a crop like lettuce is to flood the fields, so French hopes to provide tools for farmers to do that sustainably. Farmers and growers often have to plan when to grow crops years in advance to help even out soil salinity levels. After lettuce, they may plant wheat to balance the soil. Another way to maintain salt levels is through alternating water usage.

In this case, the water from the ground is also Colorado River water, but it has percolated underground for years.

Some of the field devices French and his team use to measure water levels include meteorological instruments such as the eddy covariance, or ECV. Each ECV station includes environmental sensors, data loggers, solar panels, batteries, buried soil measures and communication modems all piled on a couple of tripods.

“The logistics of setting up micrometeorological instruments is pretty daunting. They’re expensive, complicated instruments,” French said. “You have to be able to move them at a moment’s notice when the farm decides they’re going to irrigate or cultivate or spray.”

French regularly makes the two-hour journey from Maricopa to maneuver the expensive equipment in the agricultural fields, which he says is no easy feat.

“You have to carry it by hand from the road,” he said begrudgingly. “One of the guys is like a weightlifter, but for me to carry a car battery into a wet field is really hard.”

With eight or nine of these stations spread across southern Arizona, French said there’s always something that needs attention — even bird poop can be cause for concern.

Also in their toolkit for measuring and monitoring crop water use is their partnership with NASA. French uses satellite data to both the amount of vegetation and the land surface temperatures, which provides two-fold, valuable data.

“The satellite remote sensing is really two things. One is the vegetation, the chlorophyll content,” French said. “Then the second part is temperature. The temperature is like your swamp cooler — if plants are healthy, they’re going to stay cool. If they’re water stressed, they’re going to be hot. We can measure that from space.”

French and his team recently published a paper detailing their research findings on wheat crops, and will soon publish another paper on lettuce.

The outcome of French’s research will not only give growers valuable and current data on water use and salt management, it will also provide practical ways to monitor water using remote sensing tools and possibly even smartphone apps.

French says one of the best parts of his work with growers is the ability to get out into the communities and speak with farmers. He goes from Yuma, where nearly every field represents a different grower, to Ak-Chin, where he only needs to head to one place. He commended the Ak-Chin Indian Community for its commitment to agricultural enterprise, and called it “a really nice collaboration.”

In fact, French can say that about most of his nearly five years of work in researching water and salt levels for the growers of southern Arizona.

“The fact that scientists and growers can work together collaboratively, that’s what’s mattered,” French said. “I’m motivated by scientific research — that’s why I do what I do, trying to answer questions that are hard to answer. Working with other scientists is extremely rewarding for me. But until the last few years, I haven’t been able to work in addition to that, collaboratively with growers, and that’s what’s changed in the last few years.”

PHOENIX -- A panel of Arizona officials discussed water issues facing the state in a webinar Tuesday.