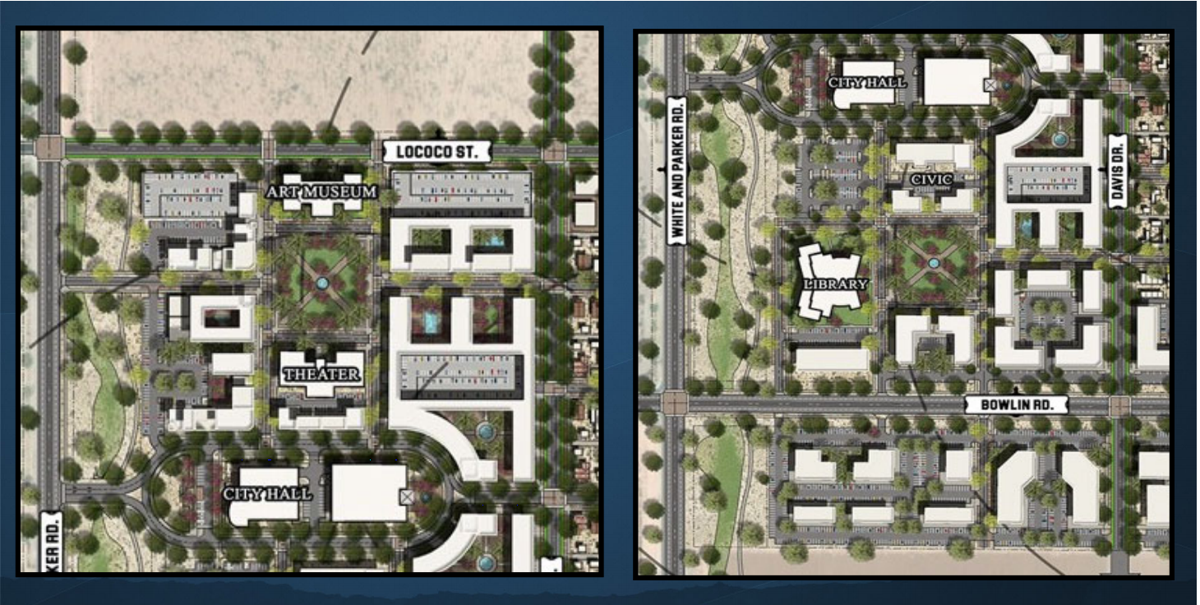 The northwest and southwest quadrants of a multi-use civic center proposed by Maricopa city officials at a January Future Planning Conference. 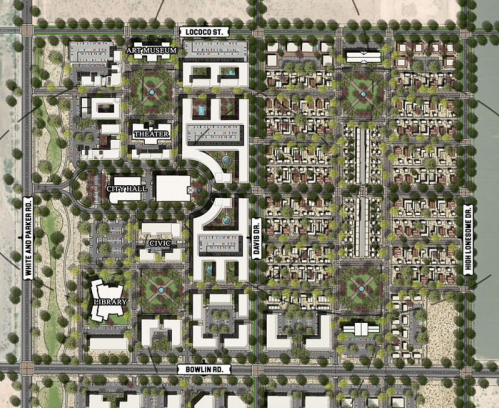 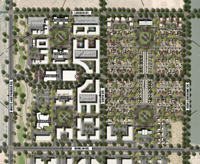 The proposed design for a multi-use civic center presented at a January Future Planning Conference in Maricopa.

The northwest and southwest quadrants of a multi-use civic center proposed by Maricopa city officials at a January Future Planning Conference.

The proposed design for a multi-use civic center presented at a January Future Planning Conference in Maricopa.

MARICOPA — When Maricopa first built its City Hall on a large swath of land off White and Parker Road, many questioned why it had been placed east of the main thoroughfare for the city, State Route 347.

However, City Hall sits directly in the geographic center of the city, and it’s a 160-acre area officials like City Manager Rick Horst want to see developed into a bustling city center.

In a Future Planning Conference held Jan. 13, Horst presented a vision of what this city center could look like. The center would serve the main purpose of creating a walkable, open-air space where community members could congregate. It would also have retail, dining, office space and leisure areas to keep residents engaged.

Horst described the latest design as a puzzle, with individual pieces that can be plugged into place. There are four main parts of the square 160-acre piece of land, with the current City Hall and library area making up the northwest quadrant.

He pitched the civic center as a whole concept, with a long walkway down the middle and four water features at the center of each quadrant. Dotted circles on the design map indicate a five-minute walking distance, and Horst envisioned office workers being able to walk to an eatery for a quick bite or impulse buy on a lunch break.

And some of the elements of the civic center vision are already falling into place.

The brand-new library is nearing completion, targeted for the end of March, according to Deputy Director of Community Services Jennifer Bostian. During a tour inside the new building, Bostian described how each space would be utilized.

Large, two-story bay windows on the north and south sides of the building allow for natural light, and colorful yellow and orange walls direct the eye to different areas of the open space. The western side will house the majority of the library areas, with a dedicated kids section decorated with soft flooring, a barn door and a kid-sized tunnel entrance. Study rooms have been added for quiet areas, and a future reception desk will sit in the center of the western wing.

The eastern and western sides of the building can be sealed off from one another with large pull-down doors, and the eastern side will house several city offices and meeting spaces as well as the technology lab, bathrooms and maker-space.

During the tour, Horst said the building was “designed for as much multi-use and flexibility as possible.”

The same can be said for much of the future spaces envisioned by the city.

In the same northwest quadrant as the library, Horst proposed new buildings surrounding the current City Hall, which could include an art museum building and a theater. To the south of the library is another area of land that Horst says is ready to go on the market for potential builders.

Horst said that by pitching an entire concept, developers could come in and buy out one of the quadrants for town homes or other amenities in the future, and he feels there’s no better time to get started.

Maricopa Mayor Christian Price was on board with this latest concept and said that a previous civic center concept proposed in 2018 paled in comparison.

“I’ve always hated the other plan,” Price said with a laugh. “I really did not care for it. It was too structured, just packed in there and it just didn’t fit. It didn’t feel like a place to socialize together and gather. … I really like this idea.”

Price said he hoped the new proposed civic space would allow for constant activity at the heart of the city instead of just city business.

“What I’ve always envisioned is something that is active during the day and maintains that activity at night, even though the government goes home,” Price said.

MARICOPA — At the end of Thursday’s Future Planning Conference for the city of Maricopa, it …