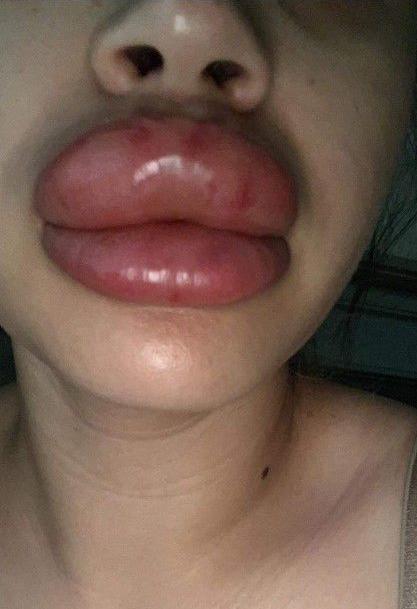 These swollen lips resulted from lip injections in an operation in Maricopa.

These swollen lips resulted from lip injections in an operation in Maricopa.

MARICOPA — As some people search for affordable lip injections, a woman who operated out of her home in Maricopa reportedly caused infected, swollen lips in those who used her service.

The woman operated without a license or even asking for the clients’ identification prior to the procedure, according to one of the victims.

On Aug. 3, Alexandra Garaventa and her best friend drove from Peoria to Maricopa in hopes of getting lip injections from a woman by the name of Gabby. According to Garaventa, her best friend had been coming to the business for a year prior to the incident.

It was immediately after the procedure that Garaventa knew something was wrong. She explained that her lips started to swell right after they got in the car. After an hour, her lips had swollen significantly.

“It was the worst pain that I’ve had,” Garaventa said.

She texted Gabby, but she only replied by saying that the swelling is normal.

The upcoming weeks were among the worst for Garaventa, with trips to multiple doctors and eventually to Banner Thunderbird Medical Center in Glendale, where two surgeries were conducted on her swollen lips. One was to extract material and the other was to insert dissolvent in the lips.

According to the Maricopa Police Department, three people had come forward with the same complaint. However, the last name of the woman, Gabby, had been reported differently by all three.

“We’re still looking into the incident and the licensing of the female,” said Ricky Alvarado, public relations specialist for MPD.

The women’s lip injections were $80 per milliliter, which is well under the average price.

According to Garaventa, the woman has deleted her Facebook account and changed her phone number in the meantime.

“I’m feeling a lot of emotions right now,” Garaventa said. “What she did is very unprofessional, and it’s as if she fled after all this happened.”