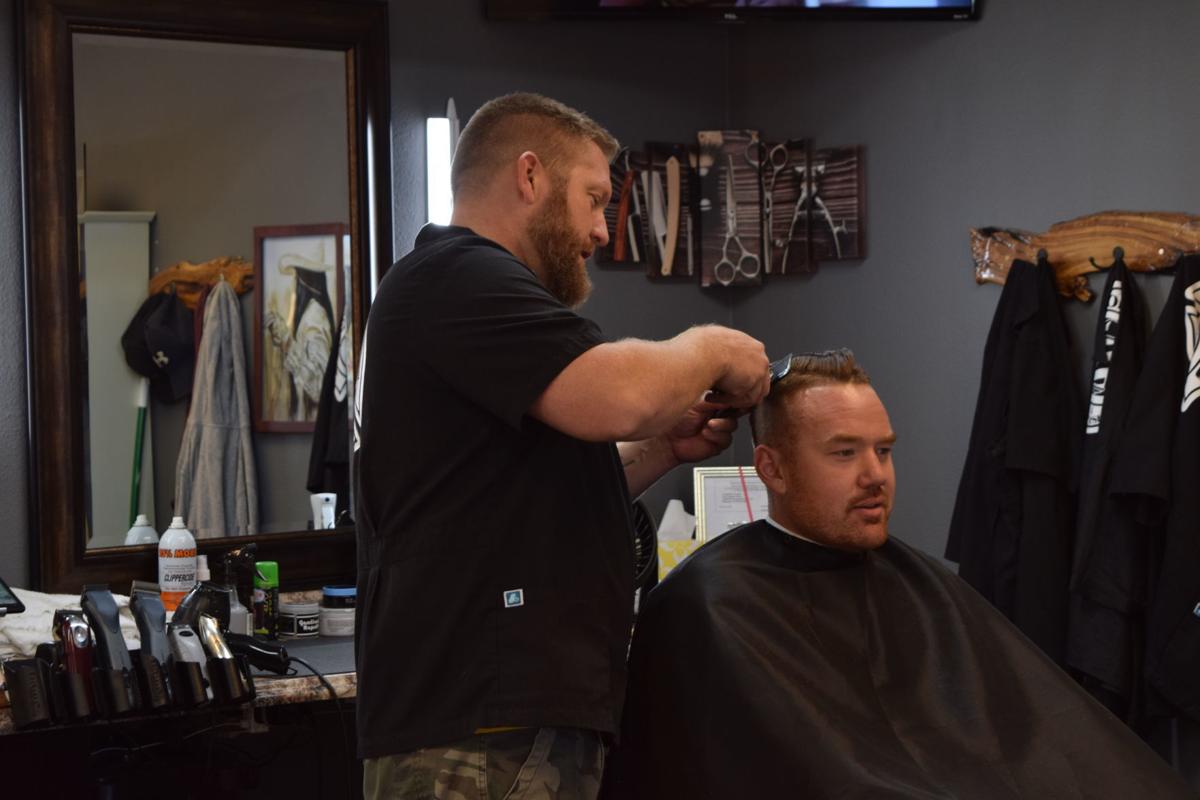 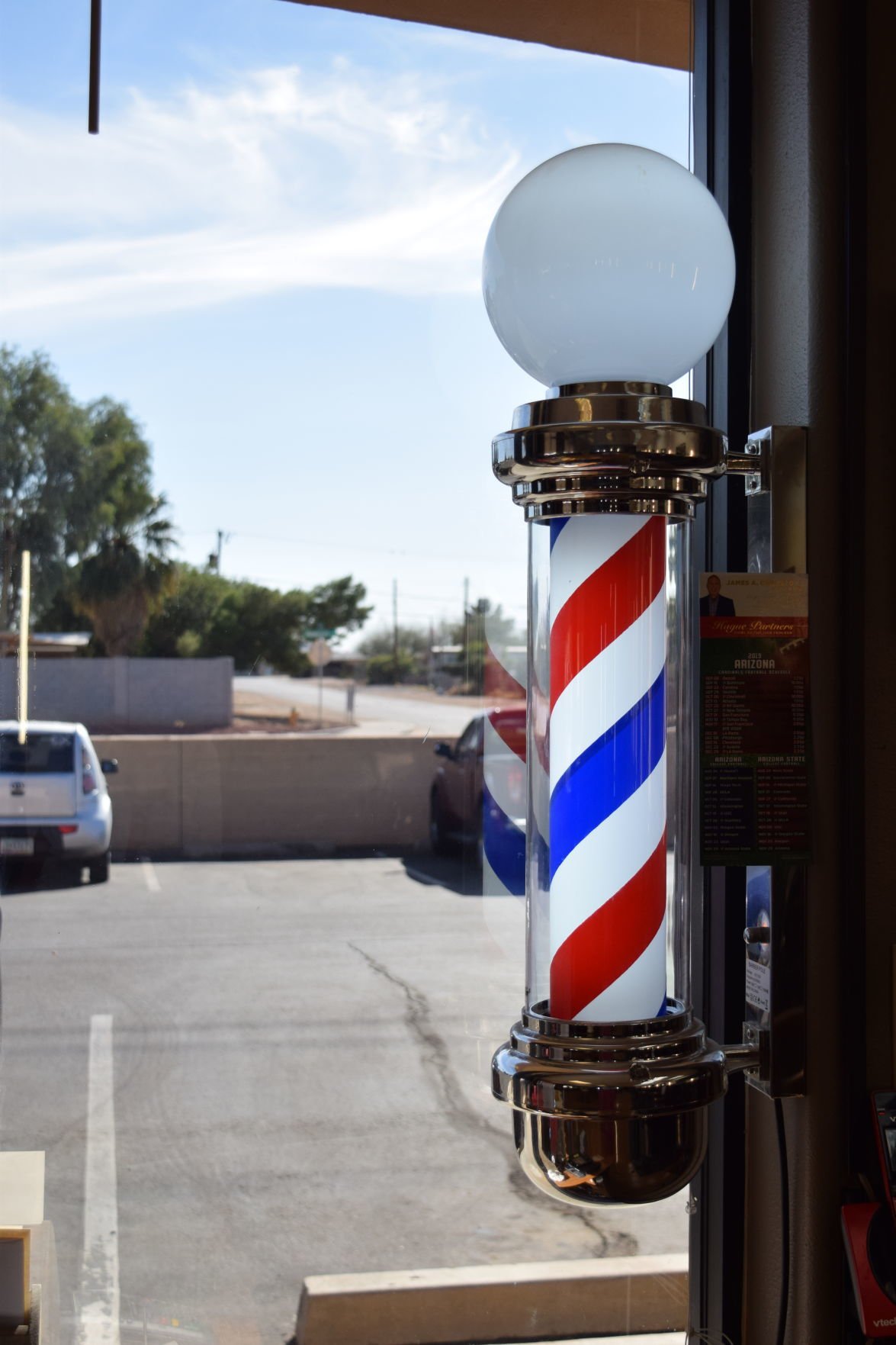 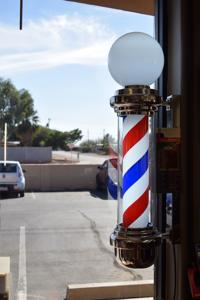 A barber poll spins inside Joe’s: A Barber Shop.

A barber poll spins inside Joe’s: A Barber Shop.

MARICOPA — Joe Templin sat outside his barber shop, Joe’s: A Barber Shop, sipping on an iced coffee from Honeycutt Coffee — just a stone’s throw from his business’s front door. His hair blew in a fall breeze, immaculately coiffed and cut in a way only a barber knows how. He leaned back in his chair, looking thoughtful.

He had just returned from a trip south that many people thought wasn’t a great idea.

“There’s a perception of Mexico right now that is very negative,” Templin said. “When I told people that I was going down this last weekend to cut hair, people were like, ‘Oh, you’re going down? What about the murders that just happened and things?’ If you’re doing what you’re supposed to be doing in Mexico, then you don’t get caught up in that stuff. We go down there because the people are just beautiful, beautiful people and they’re so appreciative.”

This was Templin’s third trip to Mexico since opening Joe’s in Maricopa about a year and a half ago. He and his wife, Celeste, make the drive down to Puerto Peñasco, where Templin spent a great deal of time vacationing as a child. They journey to a local men’s shelter and orphanage there, affiliated with the God’s Grace Foundation and Oc3an View Ministry and also loosely with their local church in Maricopa, Community of Hope Church. This time, they brought their two young daughters — Caia, 5, and Avery, 3.

Templin cut hair for 24 men in just three-and-a-half hours on their first trip in March, and 14 more on each of their return trips. When the shelter announced his return on Nov. 10, the 70-or-so men at the facility cheered and clapped.

“They’re so appreciative,” Templin said. “They can’t stop saying thank you. I don’t speak a lot of Spanish, but it’s almost like they don’t know how to even express it. The gratitude is written all over their face. I guess that’s the most rewarding thing, is walking away from the experience with this warm feeling of happiness.”

He especially likes cutting the kids’ hair, and their smiles dazzle when they see their fresh cuts for the first time.

The shelter is a sober-living facility, where men can go for support and sobriety if they are addicted to drugs and alcohol. Templin said that, much like the United States, Mexico has an opioid problem — especially among vulnerable populations.

“Drugs and alcohol are a very, very big problem down there,” Templin said. “Most people think, ‘Oh, one of Mexico’s major exports is meth.’ Well, really and truly, meth is a huge problem down there as well. If you’re homeless down there, you’re probably addicted to some type of drug or alcohol.”

The goal of many living at the shelter is to put their lives back together, and that means finding work. Templin understands that a huge part of finding a job is looking the part, and a good haircut is a great start. Though he is trekking to Peñasco every three months, Templin says it’s not enough.

“If we could do it more often, it would mean that these guys would be looking better on a regular basis and things like that,” Templin said. “So the ultimate goal is to be down there more often, not just once a quarter.”

With his frequent trips across the hotly discussed border, it’s hard for Templin to ignore the political side of the issue, but he tries his best to help anyway.

“I can’t change people’s minds and perceptions about our relations with Mexico. I can’t do it personally,” Templin said. “When people come across from Mexico to the United States illegally, it’s obviously not the right way to go about things. And if we can help better them and help their economy down there, then they don’t have to do that.”

Templin has been wielding hair clippers since he was 14 years old, cutting hair out of his home in Tucson for the benefit of the neighborhood kids. Barbering runs in Templin’s blood, as his grandfather had been a career barber as well. But, as he grew older, Templin felt called to serve the community in other ways.

Templin became an EMT and then a volunteer firefighter, though still cutting hair for his companions at the station. He also taught EMT, first responder and fire science classes at Pima Community College. But when it came time to settle down with his family, he returned to his passion as a barber.

He co-owned a shop in Gilbert with an old friend, and together they boosted the shop to be No. 1-rated in Arizona on both Google and Yelp. But after a move to Maricopa, Templin realized he had a great opportunity in the smaller city.

Templin set out to create a different sort of experience for customers looking for a fresh new do than what he felt Maricopans were getting before, one that incorporated the whole family. His now busy shop has a kids corner complete with blocks and other toys for kids to keep themselves busy, a cushy seating area and a TV.

As a customer walked by Templin’s seat and into his barber shop, he waved and said, “I’ll be right with you, bro.”

He estimates about 25% of his customer base travel south from Gilbert to Maricopa to see him, including this man, Isaac Cruz, who had been a client of his at his previous shop.

Templin seems to create that sense of community wherever he goes, regardless of borders. It even stretches to include the competition, House of Gentry, a salon just a couple doors down from Joe’s: A Barber Shop. The two have a signed agreement to try and maintain their own clientele and to refer clients they feel would be better suited at the other location.

The barbershop specializes in shorter haircuts, designs, beards and fades, while House of Gentry caters to longer-haired clients typically looking for color, perms or more of a stylish look. He was quick to clarify that all genders are welcome in his shop, though.

“If a female walks in and says, ‘I want this cut,’ and it’s something that doesn’t cross over the bounds of what they do with that salon, then yes, we totally take it,” Templin said. “Honestly, I’ve sent plenty of people who come in with longer hair who wanted styled, longer cuts (to House of Gentry). I said, ‘This is the place for you. You should go check them out.’ He’s done the same for me. … We’ve learned to coexist and live together.”

Though fresh from his latest trip, Templin isn’t ready to slow down. If anything, he’s got more than ever planned for the future. He hopes to continue making more frequent trips to the shelter across the border and asks that the community consider donating to the organizations responsible for the shelter, God’s Grace Foundation and Oc3an View Ministry, as most of the expenses for his trips are out of pocket.