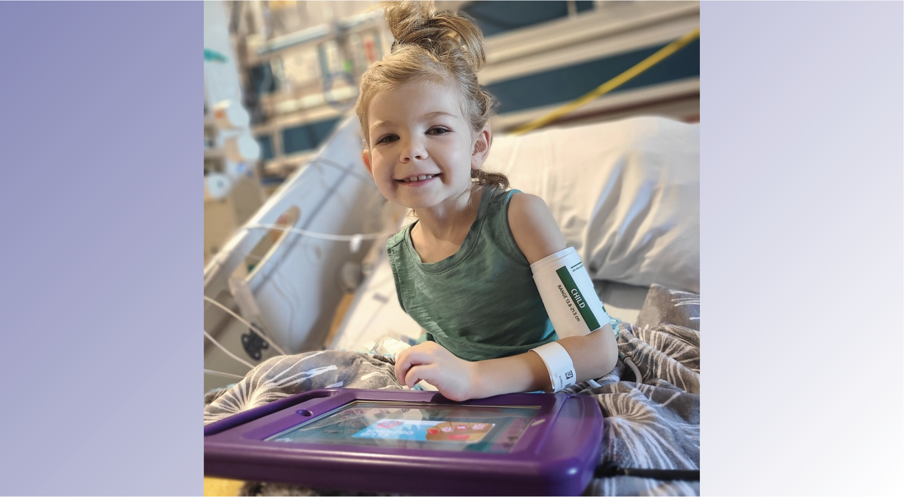 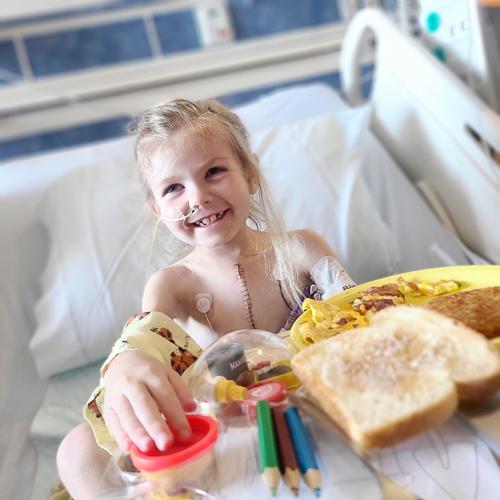 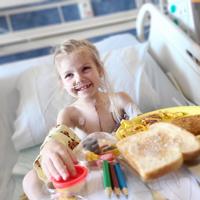 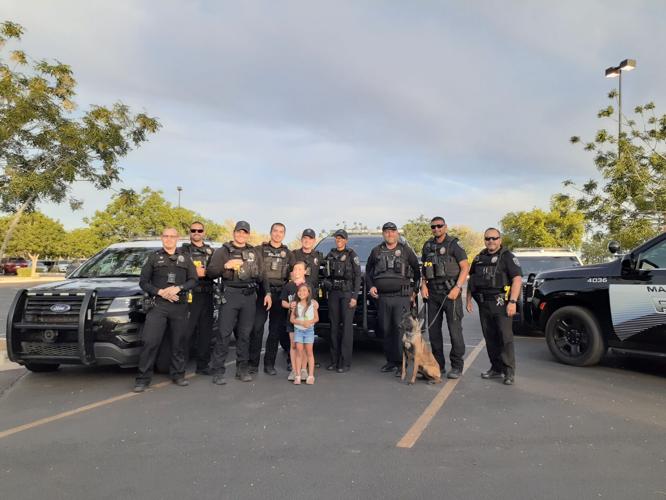 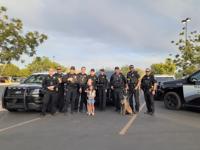 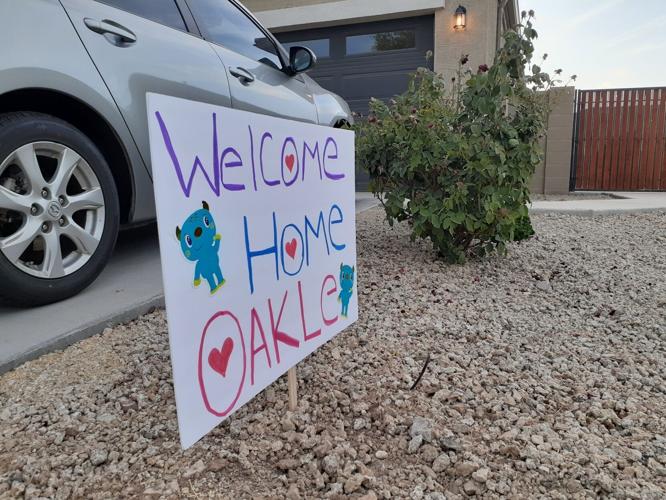 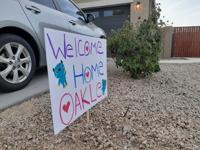 A neighbor's sign welcomes Oakle Lucas home from the hospital.

A neighbor's sign welcomes Oakle Lucas home from the hospital.

MARICOPA — Oakle Lucas’ parents, Courtne and Matt, consider their daughter’s story a “true miracle at every stage of her journey.”

A couple weeks before Mother’s Day, Oakle, 7, wasn’t eating as usual. She was lethargic and throwing up.

They took Oakle to her pediatrician, who thought it was a stomach virus and constipation. They were told to come back in a week, but if Oakle didn’t improve, they could come back sooner.

Oakle remained extremely tired and didn’t want to play with her friends.

Courtne took Oakle to the emergency room on Mother’s Day with some help from a couple of friends, who also thought Oakle should be taken in. Her parents consider this the first miracle.

At Chandler Regional Medical Center, tests were conducted on her stomach along with a chest X-ray.

Oakle was admitted to Phoenix Children’s Hospital and diagnosed with idiopathic dilated cardiomyopathy, a heart condition in which blood isn’t getting pumped to the rest of the body.

At the hospital, doctors put Oakle on medication to improve her heart function, which was around 15% compared to a normal 60%.

On May 16, she was put on the list, but a question arose. How were doctors going to cope in the short term with decreasing function?

Her parents talked with the team and decided Oakle’s best option was surgery for a Berlin heart implant, a ventricular assist device outside the body designed to pump blood.

Matt and Courtne shared their fears about Oakle’s older sister, Aubre, who had a heart issue as well. Even though the issue was different, Aubre had needed the same Berlin heart surgery to give her time until a heart was available for transplant.

Unfortunately, Aubre passed away at age 5 months during the Berlin heart surgery.

On May 17, the day of Oakle’s Berlin heart surgery, “saying emotions were high is an understatement,” especially after losing Aubre during the procedure, Oakle’s parents said. It was an “extremely difficult day.”

Oakle was scheduled for the operating room at 10 a.m., but that morning there were delays delivering the device. They were late taking her down for surgery.

Courtne and Matt consider this another miracle.

They received text message updates every hour, but then the texts stopped. They wondered what had happened.

Finally, they received a text saying Oakle was doing fine and the surgeon would be up shortly to talk with them.

The surgeon told them the hospital had found a heart for Oakle with her blood type and the correct size. If the surgery hadn’t been delayed and they started the Berlin heart surgery, they would’ve had to reject the transplant heart.

Later on, Courtne and Matt found out just how close this reality was. The surgeons were within minutes of beginning the Berlin heart surgery.

In all their heart transplants, the surgeons told Oakle’s parents they’d never seen this happen before.

After the team inspected the heart later that evening, Oakle was ready for her new heart.

Matt and Courtne felt the surgery went on for an “eternity,” but finally the staff let them know she was off bypass and doing great.

After 10 days with her new heart, she was released from the hospital due to her great recovery. She hasn’t complained of any pain, just wanting lots of food.

On June 3, Amanda Marrufo, a family friend, organized a surprise welcome home parade for Oakle to drive past the Lucas’ house to offer well-wishes for her recovery.

“It was very emotional,” Courtne said. “It was nice to see (the community) come out and really cheer her up. (Oakle) was amazed. It is truly amazing because you see it happening to other people and you’re like, ‘Oh, I would love to do something like that,’ but when it happens to your own family and to see everyone come together like that, there’s really no words. There really isn’t.”

Oakle’s parents believe every step of their daughter’s journey has been a miracle. If any of these steps had been altered, the outcome could have been “vastly different.”

“Ever since she got back up, she’s has been such a trooper with recovering,” Courtne said. “She’s been such a champ.”

Recently, Oakle had a biopsy with a catheter, a tube threaded through a vein in the neck or groin area, to check for rejection of the new heart. It’s treated as a surgical procedure since Oakle might need to stay overnight.

Right now, she has zero grade of rejection. She’ll have another one in July.

Eventually, she’ll do it yearly.

The parents have been very grateful to receive support from the Maricopa community during this time in their lives. They’ve only been living in Maricopa for two years this June.

“I think the community really came out for Oakle,” Matt said.

Courtne emphasized how much her friend Marrufo did to let people know what was going on with Oakle and how the community could get involved in helping them.

In the beginning, Marrufo created a GoFundMe page, which raised over $5,000 for the Lucas family.

Local businesses, the police and fire department, people on social media and others have all shown the Lucas family tremendous support during Oakle’s heart journey.

Courtne said the hardest part for them right now is having one parent stay with Oakle since they can’t hire a babysitter. They can’t be around people too much for the first three months to keep Oakle healthy during her recovery.

After those three months, she’ll be somewhat back to living a normal life.

Courtne enrolled Oakle in an online program for the next school year, then she’ll go back to a regular classroom setting.

Right now, they’re making sure she gets enough rest and food since she lost about 8 pounds during the three weeks leading up to the surgery when her health declined.

As challenges arise, Oakle and her family will take them as they come.

Oakle will always need to be aware of her health. If she gets sick, it can take her longer to recover than the average person due to her medications, which are immunosuppressants.

A small yet big change for Oakle is not being able to eat grapefruits anymore and she really loves grapefruit. Her parents say it’s almost a daily conversation as to why she can’t eat them anymore.

Another milestone for Oakle is her scar. When she first had a video chat with her brother Liam, 11, she didn’t want him to see it.

“Going back into the classroom, I think she’s going to be very self-conscious since it goes up quite high, but it’s healing really nice,” Courtne said. “But that’s hard for a seven-year-old to understand, ‘Why do I have that?’ So, that is a huge obstacle.”

Oakle takes various medications right now, though some she won’t need over time. Some medications such as the anti-rejection she’ll be on for the rest of her life, costing around $1,000 a month.

Marrufo said it was an emotional time for her when she found out about Oakle’s condition. She said the Lucas family happened to be at her house the night it all happened.

“Oakle just got to the house and she wasn’t herself,” Marrufo said. “It wasn’t the same and it was just heartbreaking.”

Even though she wasn’t with Oakle at the hospital, to her it seemed like a quick turnaround. She’s heard of people being on the transplant list for days and years.

It’s been an adjustment for Marrufo and Juju since they can’t be around the Lucas family as often as they used to, especially for some girl time.

Marrufo had to explain to Juju why Oakle was getting a new heart.

“She’s super supportive,” Marrufo said. “She prayed for her (Oakle) and she wanted the best for her. She just wanted her to come home.”

Marrufo felt it was amazing to see all the people who donated to the GoFundMe and reached out wanting to donate in other ways to the Lucas family.

Courtne said her son’s been on a roller coaster.

It’s his second time witnessing a sister have a heart condition. He was 3 the first time and spent lots of time at the hospital with his family.

This time he couldn’t be in the hospital with Oakle due to COVID-19.

Liam spent time with his grandma and Marrufo’s family doing lots of fun things. Now his parents are home and they have to spend a lot of time taking care of Oakle, making sure she’s taking her medication four times a day.

Sometimes he can feel left out and want attention like any normal boy, but his parents feel he’s handling it pretty well.

His parents decided to have Liam’s heart checked to be safe.

Recently, results came back stating he has a normal-functioning heart.

“I think that was a huge relief on him because I think when the second sister had something, it had to have been in the back of his head if there was something going on with him too,” Courtne said. “He did express to me that he was kind of nervous about it. Now, he’s got that nice relief.”

Marrufo said Oakle and Liam argued as siblings do, but when Oakle was in the hospital and Liam couldn’t see her, he said he “really missed her.”

“You could tell he really did miss her,” Marrufo said.

Courtne said after Oakle and Liam video-called the first time after her heart transplant surgery, Oakle had the most genuine cry. She constantly asked while she was in the hospital when she could go home to see her big brother.

Courtne really wanted to emphasize how grateful they are to the community for all their support.

“That’s the hardest thing,” Courtne said. “You can tell people thank you all the time but sometimes thank you is not enough. Sometimes I don’t even know how to start with that.”

Those who want to support the Lucas family and follow their story can go to the Facebook page Oakle’s Journey.

Kimlye Stager covers Maricopa and the surrounding area for PinalCentral, including city, education, business, crime and more. She can be reached at kstager@pinalcentral.com.