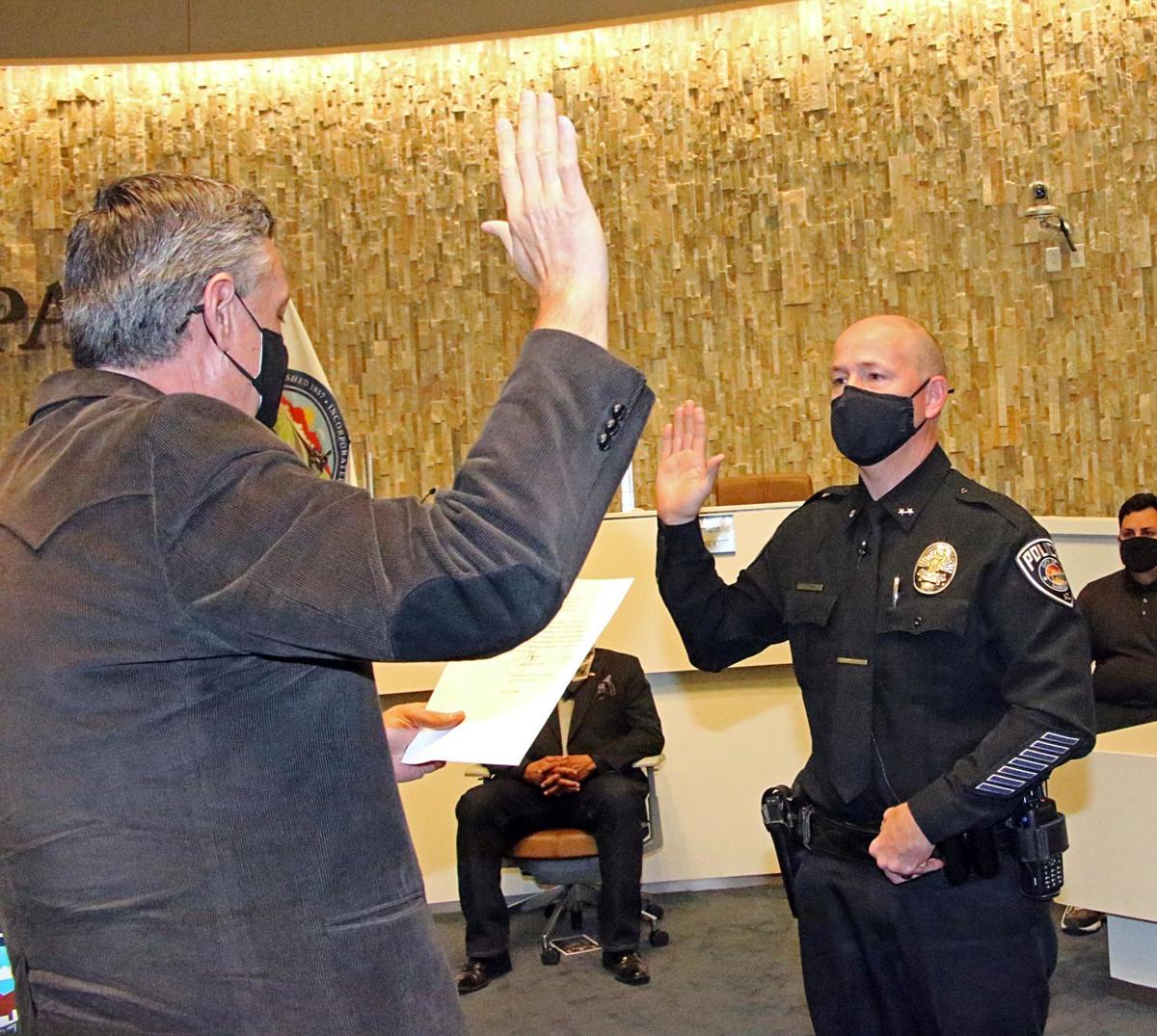 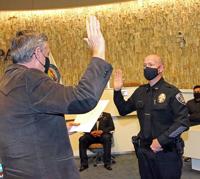 Maricopa Police Chief Jim Hughes is sworn into his position on Jan. 5 at City Hall. 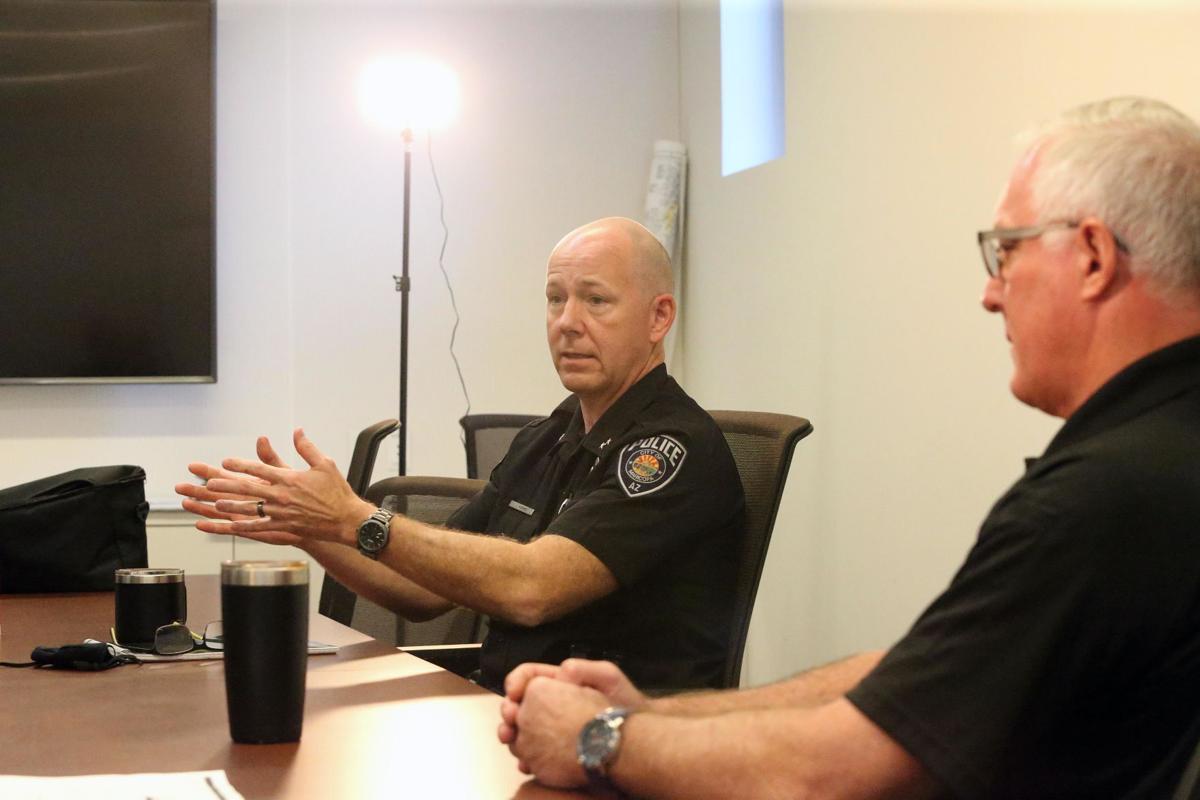 Maricopa Police Chief Jim Hughes is sworn into his position on Jan. 5 at City Hall.

MARICOPA — Maricopa Police Chief James “Jim” Hughes remembers the moment he decided to become a police officer vividly. His hometown of Bernardsville, New Jersey, had just been hit by a rainstorm that year, around August 1973.

“I was 5 or 6 years old and I was on the porch of my parents’ house,” Hughes said. “It was a heavy rainstorm. There were trees down, power lines down, and I remember seeing a police car go by.”

Bernardsville was — and still is — a town of just a few thousand, and it sits about 25 miles west of New York City. His father served the community for 26 years and, unbeknownst to Hughes that day, was in the patrol car he saw driving by.

“I was just like, ‘I want to be that person,’” Hughes said. “‘I want to be the person that’s out there when everyone else isn’t. That one person kind of standing guard for the city.’”

His father pulled over and chided a young “Jimmy” for being outside during the storm, but it would turn out to be the outdoor romp that shaped a 34-year career in law enforcement.

On Jan. 5, Hughes took on the role of police chief from now-retired Chief Steve Stahl. He takes the helm after more than eight years of service with MPD as a commander and said he has some big shoes to fill after Stahl’s retirement.

Hughes said leadership of a department takes a number of qualities, and he defines it as similar to how he was raised by his father.

“This may sound a little elementary, but I think a good leader is a lot like being a good parent,” Hughes said. “Care, do everything you can to provide for your department or family, correct your officers and employees when they go astray and support them when they do well.”

According to Hughes, Stahl embodied those qualities.

“I always respected the fact that he was one of the hardest working people in the building, (and) one of the most passionate,” Hughes said. “Nothing great happens without passion.”

Passion for the field of law enforcement is something Hughes shares with Stahl.

Hughes started out in the field as a fresh-faced 19-year-old at the Mendham Township Police Department, another bedroom community outside of New York City. After 10 years as a patrol officer, he worked in undercover narcotics. Working his way up to sergeant, he had traffic and general patrol duties before he became lieutenant of criminal investigations for the department.

“(My favorite role) personally, was my days as a young patrol officer … having some great squadmates and just the camaraderie that comes with police work,” Hughes said. “I used to say quite a bit, I’m like, ‘I can’t believe they pay me to do this job, I’d do it for nothing,’ it’s just a lot of fun.”

He worked there for 25 years as a police officer before retiring at 44 as interim chief for the department, but he felt he wasn’t done yet.

“I had amassed all this knowledge and experience and I felt if I just walked away from the profession, it would go to waste — especially at 44,” Hughes said. “(I was) still young and in the prime of my career, and I wanted to do more.”

Looking for a change of pace, he found it in the position of director of the Honolulu Police Commission. But, after about a year and a half of operating as the chief investigator of all non-criminal complaints against Honolulu police officers, he felt it was time to get back into sworn law enforcement.

Hughes said that while he really liked his Honolulu position, it did not provide for the authority to enact systemic change the way he had originally hoped. He applied to a number of departments back on the mainland and when he came in to meet Chief Stahl, it all fell into place.

“We clicked immediately and shared the same vision,” Hughes said.

He was hired as a commander with the department and would go on to work in both support services and operations departments before becoming chief with MPD this year.

Described as a cheerleader for the department by Stahl, Hughes joked that he regularly tries to recruit his exemplary servers while out to dinner with his wife in the hopes of hiring some new officers for the department.

Though he receives positive responses most of the time, Hughes also says he’s had to handle changes in public perception in recent years as well. It drives him forward, he says, to continue the department’s mantra of “making every contact excellent.”

“We’re in a public trust business. If parts of the public are being somewhat reluctant to provide trust, it’s our job to fix it. It’s our job to show them that we are worthy of their trust,” Hughes said. “It only takes a couple bad apples. We have national media and we have, you know, another difficult mountain to climb with public perception.”

Similar to Stahl, Hughes cites the challenge of each day being different as a reason to stay with the profession.

“Every day in this profession is rewarding, because every day is different. There’s no routine day at the office,” Hughes said.

Hughes’ father died in 2000, but he was able to witness Hughes’ success in the field before he passed. Hughes and his wife Brandelyn have been married for two years and live in Ahwatukee together with their blended family of seven children ranging in ages between 3 and 22.

The two met while Brandelyn worked as a city employee for Maricopa and hit it off.

Hughes’ family has shown such support for him and his career. In fact, his eldest is getting ready to pursue the same field.

In Maricopa, Hughes is thinking ahead for the future of the city too. He hopes that during his time as chief, he can strengthen ties with the other entities and communities that surround Maricopa.

“I believe that relationships drive progress,” Hughes said. “Other departments, Gila River, Ak-Chin, Pinal County Sheriff’s Office, Department of Public Safety, parole, probation, all those agencies, we can improve those relationships there. I also want to bolster community policing efforts and community outreach.”

Community policing and community outreach are important to Hughes, as they help not only to catch criminals, but to stop the crimes before they occur — the ultimate goal.

“It’s so much easier and cost effective to prevent a crime than solve a crime, and the beauty of it is that there’s no victim of a crime,” Hughes said.

As chief for MPD, Hughes sees his role as a partnership with the city to further growth in the community.

“I want the city to continue to grow with the right people. We want the right people in here that contribute to our community in a positive manner,” Hughes said. “We need to provide an environment where there’s low crime that attracts the good families to move to Maricopa.”

He hopes to address repeat and career criminal offenders and focus on overall quality of life issues that affect Maricopans. Above all though, Hughes stressed that the city is getting what they’ve already gotten from Stahl for the last eight years.

“You’re getting someone who’s approachable, someone who cares,” Hughes said. “Someone that’s not going to have all the answers and know everything, but I will work to solve the problems within our community.”