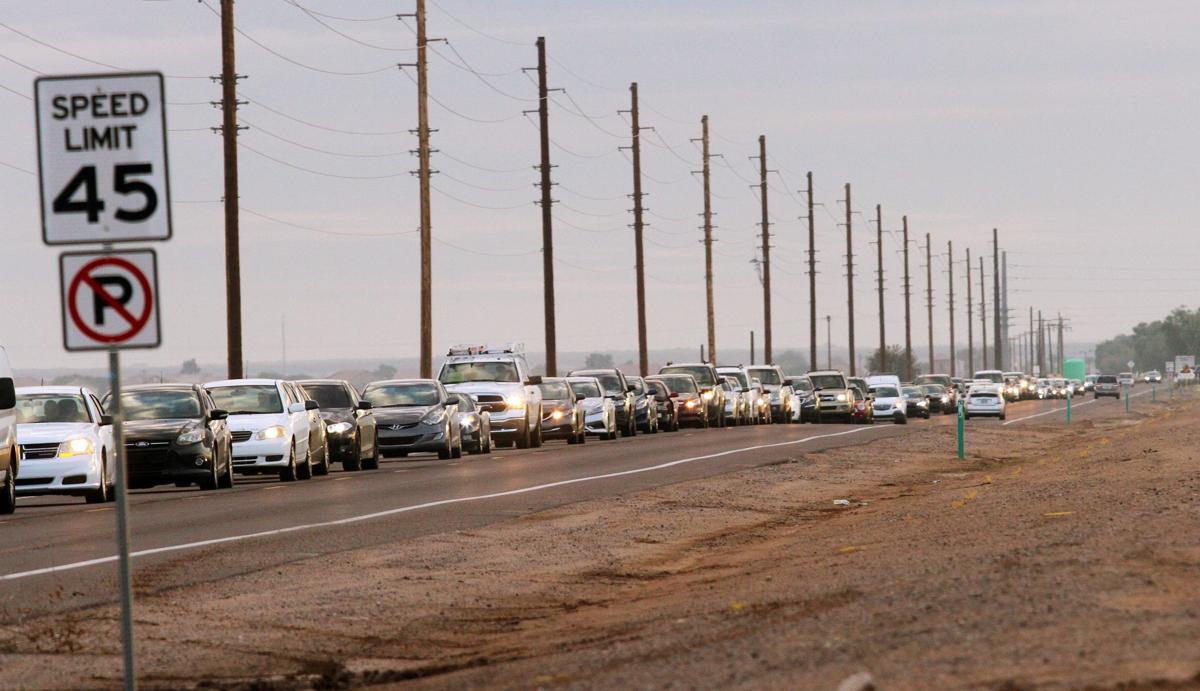 A long line of cars is backed up near the four-way stop intersection of Honeycutt and White and Parker roads. 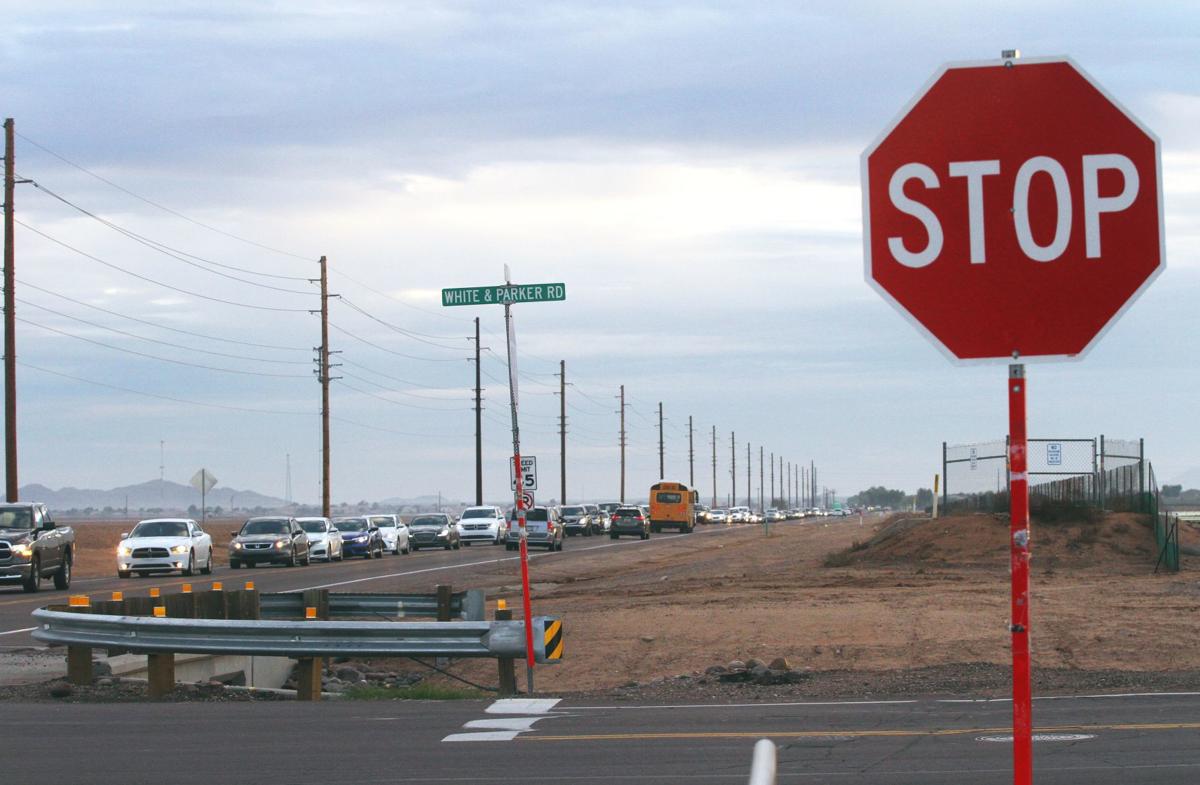 The stop signs at Honeycutt and White and Parker roads are causing a serious headache for residents of the Rancho Mirage community. 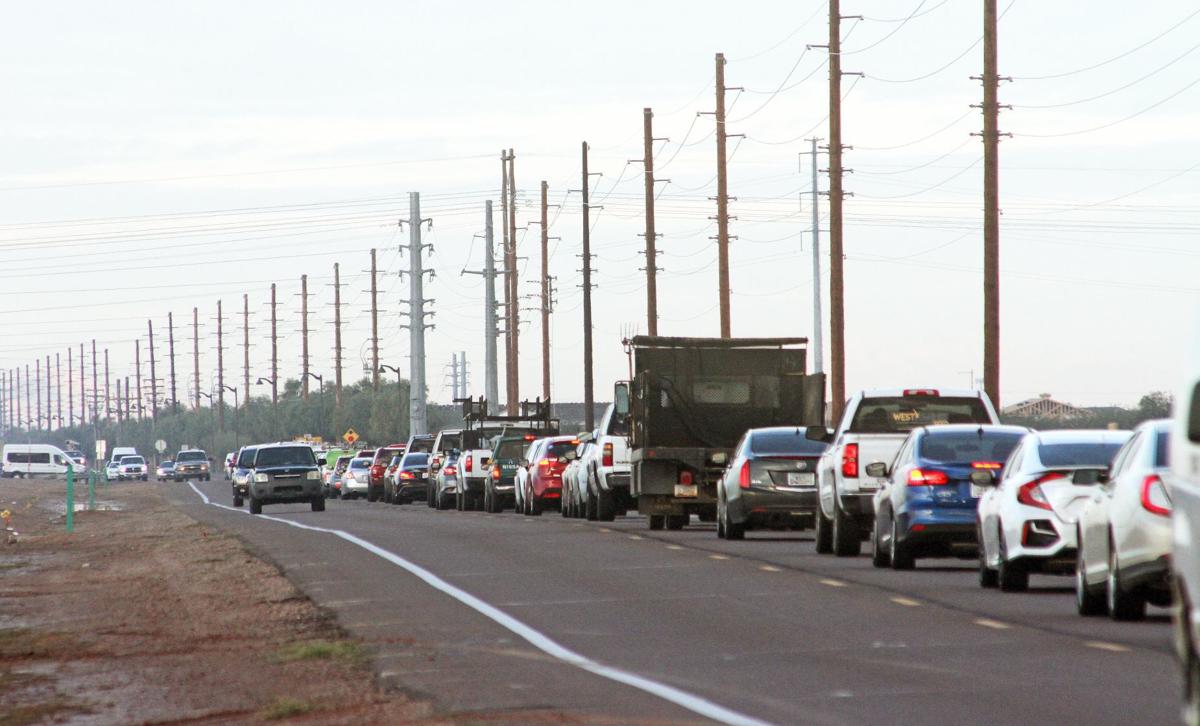 Over 100 cars regularly sit in traffic near the intersection of Honeycutt and White and Parker roads to go through a four-way stop.

A long line of cars is backed up near the four-way stop intersection of Honeycutt and White and Parker roads.

The stop signs at Honeycutt and White and Parker roads are causing a serious headache for residents of the Rancho Mirage community.

Over 100 cars regularly sit in traffic near the intersection of Honeycutt and White and Parker roads to go through a four-way stop.

MARICOPA — Residents are accustomed to long commutes, as thousands leave the city every day for jobs in the Valley and in Casa Grande. But for residents living in the eastern portion of the city, it can be a 25- to 35-minute drive just to get their kids to school in the morning.

It’s all thanks to the four-way stop on Honeycutt and White and Parker roads, which can back up all the way to the bridge at Santa Rosa Wash with more than 100 cars waiting to get through, according to posts on Facebook.

PinalCentral reached out to residents to get their take on the traffic issue and received many responses via email.

Kristin Owczarzak, a resident of Rancho Mirage, is a second grade teacher at Sequoia Pathway Academy, where her children also attend, and has experienced the drama of that intersection every morning on her commute to the school. What is as little as a 2.6-mile journey from home to work can take 15 minutes or more.

“I need to be at work by 7:30 a.m.,” Owczarzak said in an email. “A few years ago, I would be able to get to work under five minutes. Now it takes me much longer, especially if I leave my house at 7:20 or later. I also have students in my class who are stuck in this backup. I understand the argument to leave earlier, which is exactly what my family does. However, there are days that leaving early doesn’t always work out.”

One resident is so fed up she’s decided to drive around it. Marilee Bell lives in Rancho Mirage and has gotten so frustrated by traffic delays she’ll take the extra mileage of going the only alternative route available to residents living in the outlier community.

“It can take 20 minutes to get through the stop sign. This is the only way out for three subdivisions on a two-lane road,” Bell said.

Ashley Alward is also a Rancho Mirage resident, and she got into an accident at the infamous intersection in October of 2018.

“My vehicle was a total loss in that collision, but it led to me also striking the four cars in front of me — five vehicles in total — and thankfully nobody was badly hurt,” Alward wrote. “All it takes is one vehicle not paying attention and it’s a domino effect from there due to all of the backed-up, waiting vehicles. I especially worry because my children often travel this route by school bus. I hope there is a temporary fix the city can get in place until a more permanent solution can be made.”

Mayor Christian Price is not oblivious to the issue, as it practically happens outside his office door at City Hall. However, he was reluctant to offer a temporary solution — such as a portable traffic light suggested by many in the community — as it would delay the permanent one the city is currently working on.

“It is true that a light of a temporary nature creates some value, but it also creates an expense,” Price said in an interview Thursday. “So we have to ask ourselves, do we want to delay the permanent solution because we’re putting money into a temporary solution, or would we rather save the money and deal with the inconvenience that has existed since most people have moved into that area … Why don’t we just wait the extra five months until it’s up?”

The traffic lights at the intersection are scheduled to be completed in April or May of next year, according to the mayor, and will include a right-hand turn lane in addition to the straight lane.

According to Price, the obligation to improve this intersection falls on the developers of the Rancho Mirage community, as they are the reason the road exists to begin with. However, it is not likely they will address the issue in a timely manner.

“The city has stepped up and said, ‘Look, this isn’t something we would normally approve today,’” Price said. “We would say, ‘If you’re going to do this, then you’re going to have to provide a light at White and Parker and Honeycutt today, and the developer (would say), ‘That’s not our problem.’ It is, because look at all the people that are suffering the issue today, right?”

Price said the city has pushed forward with the project without developer involvement and is hoping that the new stoplight will bring new business to the area and earn the city’s money back from the intersection signal, estimated by Price to cost about $350,000 for installation.

He is also hopeful that the extension of Bowlin Road will divert some of the current traffic on Honeycutt Road, as more people will be able to use that road in addition to Honeycutt to get across from Rancho Mirage.

“We were going to do that over a two-year period, (but) we’re gonna do it all this (fiscal) year,” Price said, gesturing out his office window at Bowlin Road. “We’re going to push another project back and do it all this year, which means that is going to eliminate almost 40% of the traffic that goes to that right now. There’s now going to be a (relief) because they can go this way.”

The renovations to Bowlin Road will include paving and flood management, eliminating a low-water crossing in the process.

“It’s one of those things that I wish we had an instant solution for everybody, but that’s not how it works,” Price said. “I mean, there’s just not the money to go around like that, and we have to live within our means.”