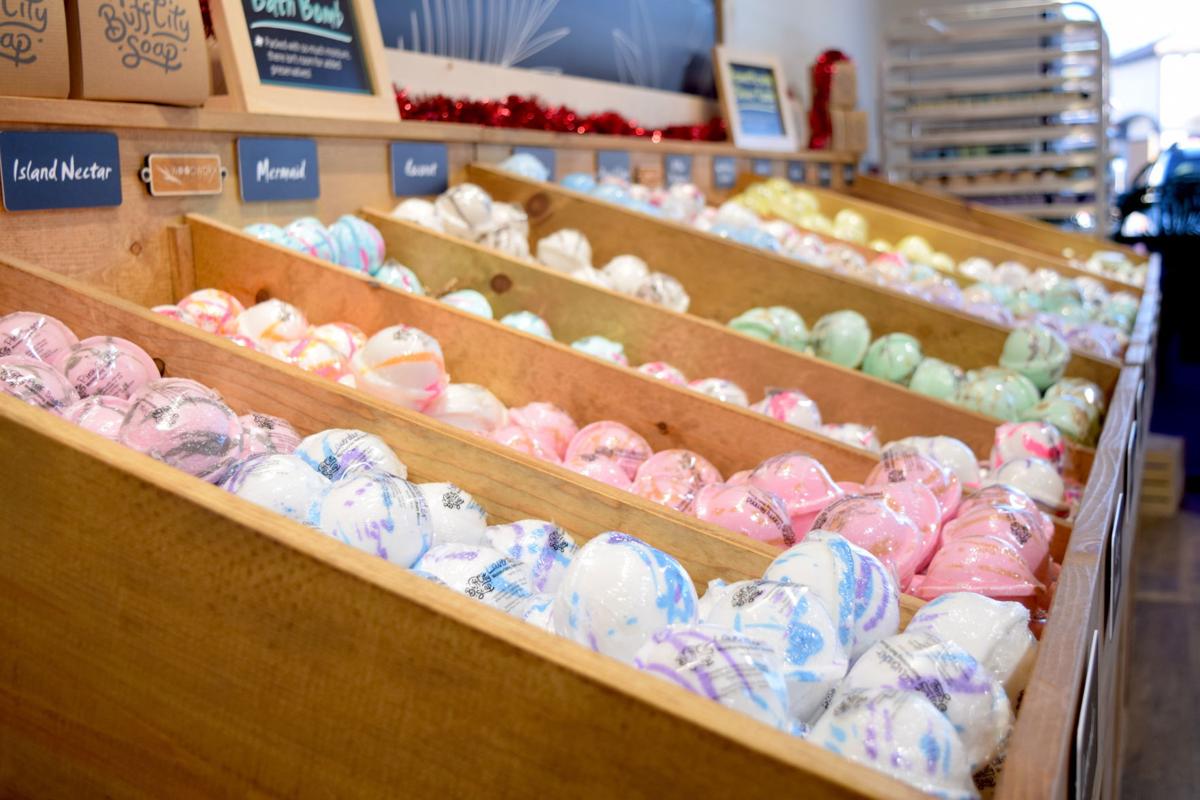 A row of colorful bath bombs are on display inside Buff City Soap in Maricopa. 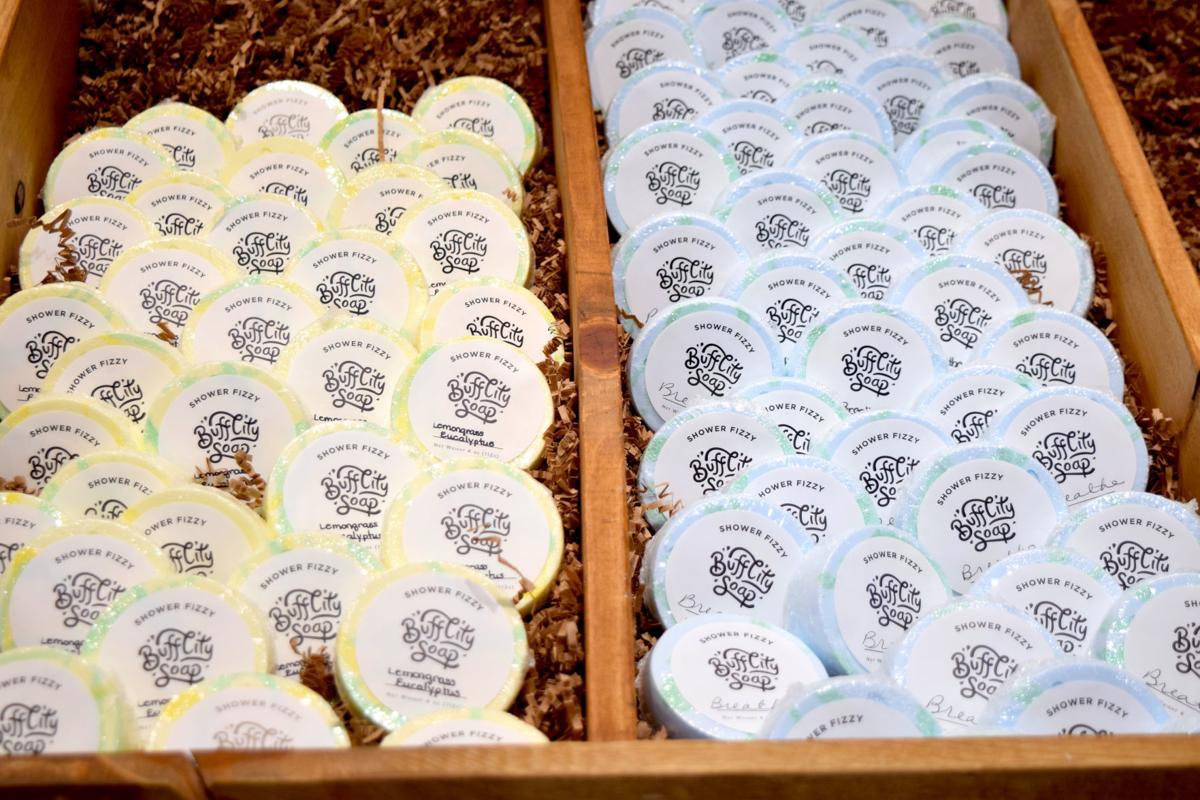 Shower Fizzies are organized into rows inside the Buff City Soap store on John Wayne Parkway. 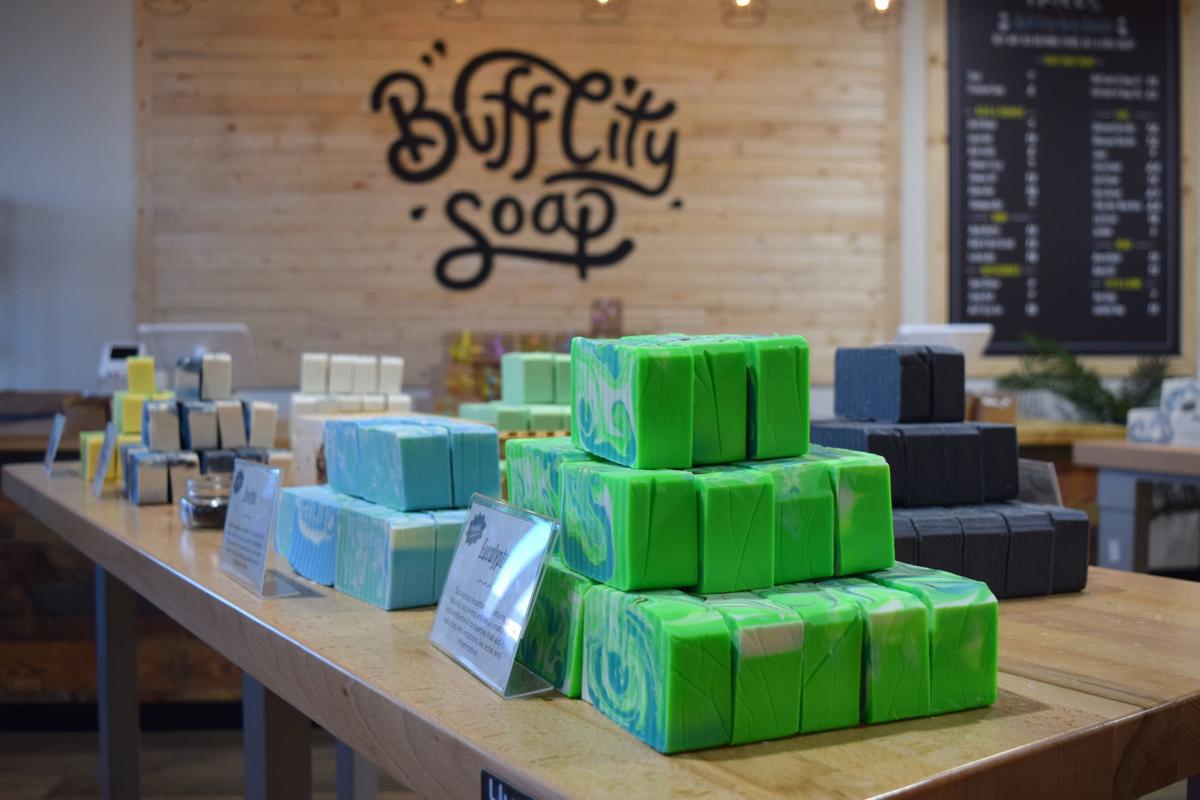 A collection of soaps are ready for purchase inside Buff City Soap in Maricopa. 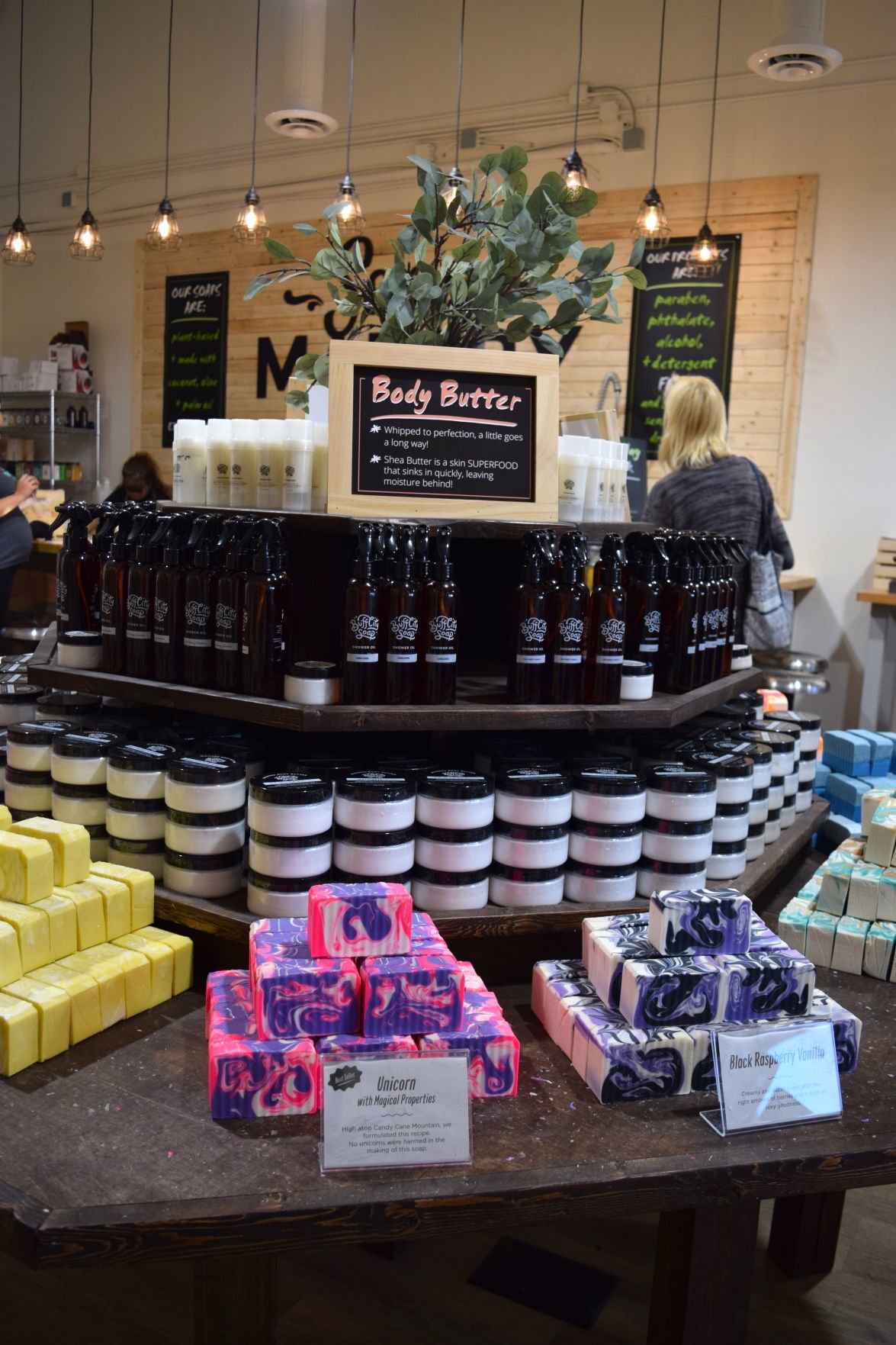 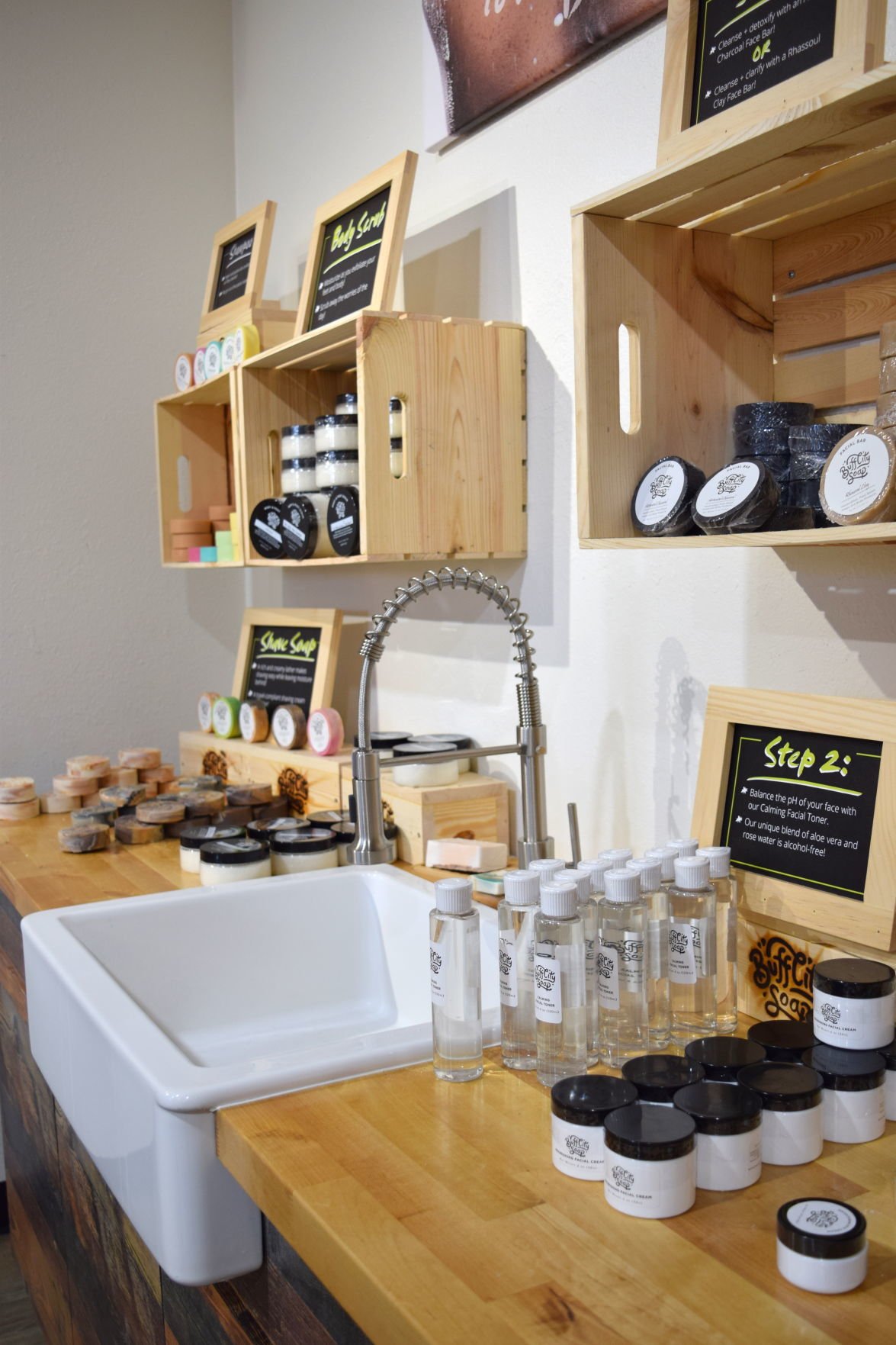 A sink available for customers of Buff City Soap to test products sits alongside their skincare displays.

A row of colorful bath bombs are on display inside Buff City Soap in Maricopa.

Shower Fizzies are organized into rows inside the Buff City Soap store on John Wayne Parkway.

A collection of soaps are ready for purchase inside Buff City Soap in Maricopa.

A sink available for customers of Buff City Soap to test products sits alongside their skincare displays.

MARICOPA — 2019 was a big year for LaDonda Dees. She left her account manager position at Verizon, fell pregnant with her first child and opened Buff City Soap — all in the span of a few months. Located on John Wayne Parkway and nestled between Say Sushi and the Sprint store, the business is already drawing the attention of Maricopans passing by.

Its colorful displays and smells bombard the senses as customers enter the shop. Wall to wall bath bombs, soaps, skin care and detergents are on display while busy employees churn out the sudsy creations, all freshly made in-house.

This is the first Buff City Soap store to open in Arizona. The franchise originally opened its doors back in 2013 in Bartlett, Tennessee after a long experimental process to nail down the perfect formula.

Buff City Soap believes they’ve perfected their formula with their tried and tested recipe free of absolutely any surfactants, detergents or preservatives for all of their product line, according to their website.

Dees found the franchise in Bartlett at the recommendation of her sister-in-law, who lives there with her husband Kevin Dees’ extended family. She knew immediately it was right for her.

“I had never looked at it before, so I started looking into it,” Dees said. “I really loved the company, the products. I mean, the stores themselves, they’re just incredible. I love everything that they are about.”

It was a swift process from there, and a steep learning curve for Dees. She began the process in May, and by Dec. 14 she had her store open and running, all while carrying her first child, a boy. She’s now eight months pregnant, but baby Devin has a little more time before he makes his appearance.

“I’m pregnant, so it’s a lot of work,” Dees said laughing. “That’s been the biggest challenge, is being on my feet all the time. I was not expecting to be pregnant and opening a store.”

It’s been well worth the struggles though, as Dees has already seen a growing customer base since the shop opened last month. Just in time for the holiday season, locals shopped for presents and the recipients of the sweet-smelling gifts have already come back looking for more.

“The most rewarding part (is) just having customers come in and talk about how much they love the product — because it’s plant-based — and how it makes their skin feel. They feel moisturized and healthy,” Dees said. “I would say it’s just really the customer feedback and the really good experiences that they’re having.”

Buff City Soap is the only official soap store to come to Maricopa, and Dees suspects her main competitors are at the local farmers markets. So far, however, she sees little correlation between Buff City and other soap makers around town.

“Nothing is like Buff City, not even the stores in Chandler and Scottsdale,” Dees said. “Buff City is very unique in their process and how they make soap. It’s also very unique in the fact that everything is handmade in-store. We’re not getting shipped out products from a different location, we’re making them in store ourselves. It’s all handmade and hand cut.”

In 2020, she even hopes to start hosting classes on how to make the goodies. Dees envisions bath bomb making classes for all ages, do-it-yourself stations during business hours and adult classes to learn the ropes of soap making.

Dees has soap recipes from the franchise that her staff follow for the majority of the products, but she also carries a local line that she created herself.

And that’s not the only thing patrons can customize. Buff City also offers customizable clay masks for different skin textures, a men’s line with beard oil and beard balms and an unscented detergent that can have the scent of choice mixed into it.

As Dees and her new business head into their first year of operation, Dees is hoping the already loyal customer base continues to grow and interact with her store.

“They (Maricopans) have been fantastic,” Dees said. “People are constantly posting about how much they love the products and everything. So I think that’s awesome to see the posts and see the shares and see the engagement on social media.”

You can find her store on Facebook @BuffCitySoapMaricopa, or in person at 21101 North John Wayne Parkway, E102.